As a chilly wind blew off the Bay, hundreds of people gathered at The Armory in San Francisco to see the sensational Erykah Badu. It was Valentine’s Day, and I arrived at The Armory while Thundercat was in mid-set, clad in all pink from head to toe. He was blowing minds with his intricate and incredibly chaotic acid-infused jazz. I was by myself,  so I danced my way into the crowd to meet new friends.

Unfortunately, they were all standing still: making me the only person shaking my head manically (because, that is really the only thing you can do once your ears hear Thundercat). And although I enjoyed the frantic genius that Thundercat is, I was excited when he ended his set with the infectious “Them Changes” and a hush fell over the crowd at the anticipation for Badu.

However that hush didn’t last, for not long after Thundercat exited the stage did a DJ perform a set entirely composed of hip-hop and soul jams – we all threw back our heads and belted out Tribe’s “Check The Rhime”, Outkast’s “Mrs. Jackson” and “Killing Me Softly” by the Fugees. During this time, conversations began and friendships started. Many people around me had also never seen Badu, and we contemplated what her show would be like. We knew it would be amazing, but none of us had any idea what to expect. 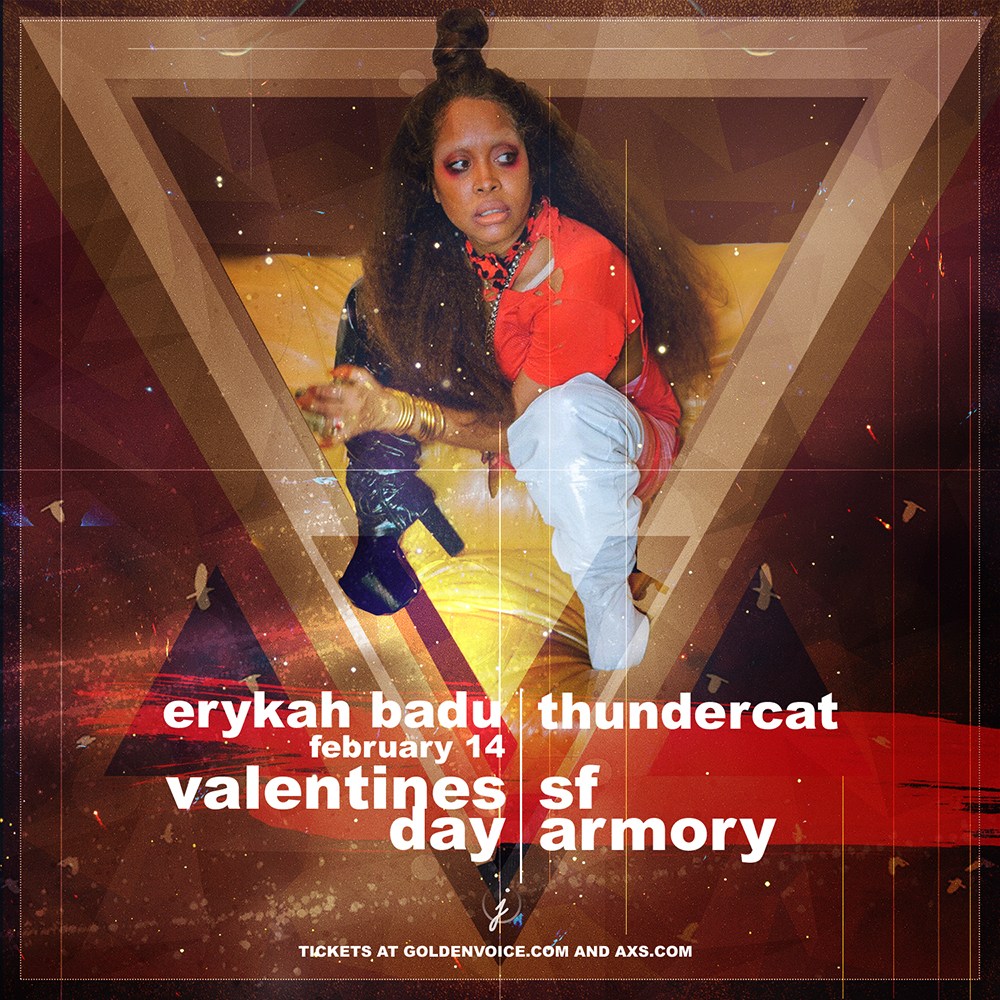 As the crowd collectively decided to save their voices for when Erykah came on, anticipation  melted into frustration. It had almost been an hour, and she was definitely late. I did my best to assure myself that Badu was just deeply immersed in a full-blown trance, surrounded by towering pieces of amethyst and jade. Or that she knew she could make us put our phones down, as her 2015 mixtape But You Caint Use My Phone suggested and was waiting for when we would give the present moment our complete and undivided attention.  Either reason I told myself, was completely acceptable. Badu is queen.

Amidst a smoky haze and thunderous applause from the crowd, she emerged around eleven o’ clock. Right away, I realized that she was wearing the coolest outfit that any female performer could ever wear. Badu, in interviews and her music has always asserted that she has never, ever been anyone but herself. By doing that, Badu has always had such a strong defiance to the mainstream music industry. So many female artists, whether it is their own decision or someone else’s, sell sex along with their music. But something I have always admired about Badu is her sensuality. She came out wearing a glittering long red cape, accessorized with her signature tall hat and a sweatshirt, looking dope as hell. Her arms were adorned with beaded arm cuffs and she exuded bohemianism with her ornate rings and necklaces.

As “Appletree” began, I was entirely unprepared for the effect that she would have on me. So was the rest of the crowd. Everyone was screaming or crying with happiness. And Badu returned the energy with absolute full force. She did not just sing, she belted. Songs from 1997’s  Baduizm, an album made twenty years ago, felt fresh and relevant as if they’d been made yesterday. Her music is timeless. As she sang many of the hits like “On & On”, “Bag Lady” and “Cleva” each song exploded with magic and passion. For “Back In The Day” the infamous whisper of “puff” was elongated into a psychedelic interlude that drove the crowd wild.

Throughout Badu’s success, she has elevated the minds and hearts of those who listen to her. She reminded us to “believe in me, as I believe in you” – a lyric that she sang with all her heart.  She spoke of that day’s horrific shooting in Florida, and her words were full of emotional weight.  She was humble. Sitting on a stool most of the time, Badu was making jokes, sometimes stumbling over her words and talking to the crowd like old friends would talk to each other.

One of my favorite moments of the whole night came not from Badu herself but from her three backup singers. She turned the spotlight over to them, and asked them to sing. As each one sang, she encouraged them to really belt it out, just as she had done. The voices that came out took my breath away. I feel that Badu is nourishing our generation, and with her performance of “Soldier” reminding us to use our voices: in song, in protest and in our own minds.

Badu was nothing short of spectacular. She brought inspiration and radiance to everyone in the room, I swear everyone left glowing. As I met up with friends and we drank champagne till the sun almost came up, we all just kept looking at each other and going “you better call Tyrone” over and over. Thank you Badu, for sharing your infectious energy and reminding us all that we can be the same creative and inspirational force that she is to others.