Popping things off this Wednesday, Jordan Polovina warmed up the evening alternating between old and new material. A couple songs into the set, Mikey Thunder came to play and brought his fire beats for Jordan to spit over. Transitioning smoothly between songs, the two brought the funk with a healthy split of their past material and some unreleased jams that had the crowd vibing. Jordan’s sesh on the drum pad showed off his improv skills and the plethora of freestyles he spit had the venue rockin. Deeper into the opening set, Mikey dropped the heat with an upbeat funk set featuring dirty scratching and some high energy mixing. 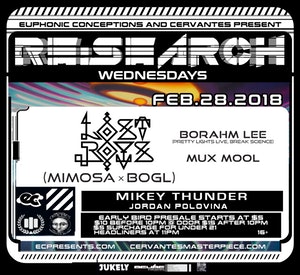 Borahm Lee of Break Science and Pretty Lights Live was next up to the plate. Coming with a sporadically bassy, synth set, Borahm piloted the crowd through a range of boom-bap and heavy bass instrumentals, accompanied by unmatched improvisational keyboard playing. If you’ve never heard it, Borahm’s solo stuff is similar to he and Adam’s Break Science sound; Borahm alternates between melodic synth piano playing and deep, trap bass music. The result is a groovy but heavy track list with hip-hop inspired drum loops and masterful keyboard playing that takes listeners on a colorful outer space journey. His extensive touring with Break Science and Pretty Lights has given Borahm the comfort on stage to show the crowd a good time while bringing his own flair to the set.

Next up was Lost Boys, False Idol Muzik’s top duo made up of Cali native Mimosa and Las Vegas DJ Bogl. The set was bass heavy with plenty of elements of classic dubstep combined with clean mixing and remixes of tracks from both artists. The two clearly have chemistry and were able to each bring their individual style to the set while combining to keep the performance fresh and fluent. While I wasn’t able to catch the end of their set, I was blown away by their ability to work off each other without slipping up in the slightest for the entire performance.

I wasn’t able to catch Mux Mool’s set, but I saw a video on Adam Deitch’s Instagram that made it look pretty awesome, and I heard nothing but good things from my friends that stuck around. Big shoutout to Euphonic Conceptions, Cervantes, and all the artists and fans for coming out. Another solid Re:Search Wednesday in the books!