Kicking off another Re:Search Wednesday, Jordan Polovina started the party with a set incorporating mollifying cello playing, improvisational drum pad beats, and heavily lyrical bars accompanied by singing on the chorus. His experimental drum pad track showed off his comfortability creating beats on the fly. Jordan’s impressive Shady-esque bars flowed throughout the night as he came out and spit during Mikey and LTJ’s sets later on. Another strong showing from Polovina only further continues to prove that showing up early on Wednesdays is the way to go. 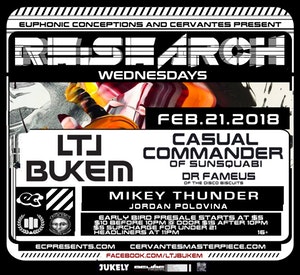 Mikey Thunder was up next, bringing some live scratching and funky boom-bop drops to the stage. His ability to build momentum and have direction within his set pushes him past the norm and gives each of his shows a unique feeling. Joined by Jordan early in the set, Mikey’s fluidity on the tables allowed Jordan to flow over multiple tracks, dropping bars even while Mikey was transitioning between instrumentals. Towards the end of his set, he was joined by LTJ and dropped some clean d&b that gave the crowd a taste of what was to come.

Following up Mikey was Sunsquabi frontman Kevin Donohue aka Casual Commander. While it was clear that Donaho could shred flavorful riffs on the guitar, his mixing and production accompanied his guitar playing naturally and the two elements built off each other throughout the set. It’s incredibly refreshing to see an artist bring something else to the table other than heavy drops and smooth transitions. Donohue’s extensive touring with Sunsquabi has earned him a clear state of comfortability on the stage. His quick switches between the boards and his guitar allowed him to meld an organic feeling to his bass-heavy set. His sound reminded me of a bassier Squabi, but with remixes of classic songs sprinkled throughout the set.

While I was only able to catch the first thirty minutes of his set, LTJ’s fast paced, liquid drum and bass set didn’t show any signs of slowing. As one of the founders of electronic music, his mastery of the craft was apparent; every transition was timed perfectly. Fading ambient sounds in and out, LTJ would let momentum build and use faded vocals or obscure noises to give the track a fresh feeling, while keeping the BPM at an all time high throughout.

I had to dip before Dr Fameus’ set, but I heard nothing but love for it! See you guys next Wednesday.