A line wrapped around the corner of the Nectar Lounge and extended down the street in the Fremont District. The chilly weather posed no threat to Seattle’s climbing community who showed up in droves clad in state-of-the-art outdoor apparel, which namely comprised of poofy down jackets. The crowd ranged from toddlers to the elderly and all were eager to step into the fire pit warmed embrace of the interior. The REEL ROCK tour is on its twelfth film festival and presents documentaries covering adventure and rock climbing. This year’s film tours cover Chris Sharma, Margo Hayes, Brad Gobright, and Maureen Beck whose narratives have drawn such crowds as to fill the Nectar Lounge completely on both floors. 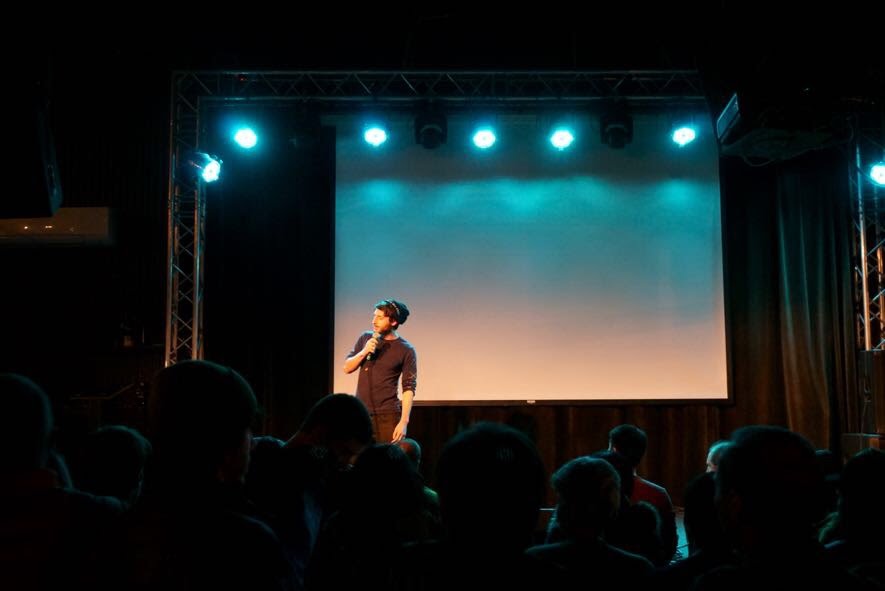 A speaker from the Washington Climbers Coalition spoke onstage to raise awareness towards a raffle whose prizes ranged from chalk bags to Deuter bags to the grand prize of a Petzl rope. There were many, many winners that night from the sheer number of prizes available. A portion of ticket proceeds went towards the coalition whose mission is to improve trails and crags in Washington’s prime climbing destinations. Comprised of solely volunteers, the coalition has finished several projects and shared with the audience future goals that earned cheers and applauses. 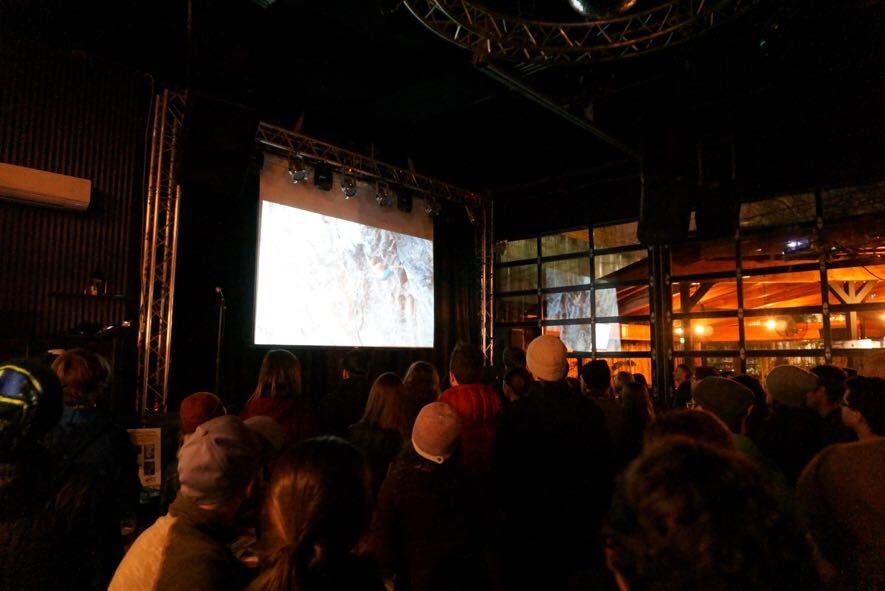 The lights dimmed as the projection on the wall glowed with moving scenes of the first documentary, Above the Sea. the first film sheds light on Chris Sharma, who is arguably the world’s best deep water soloist, and his first ascent up the world’s hardest deep water solo route on the Mediterranean island of Mallorca. Deep water soloing is the practice of climbing ropeless above the sea. The dangers of which are highlighted by shots of Sharma taking plunges from 60+ feet and beyond. Successful deep-water soloing requires being a strong swimmer with a vast knowledge of water and currents in addition to being a strong climber. The film briefly touches on Sharma’s loss of his mother and his juggling of adult responsibilities, running his own climbing gym business, and being a father and how that rooted him in his determination to climb this wall. Chris Sharma’s raw energy is shown with each move as he roars with each grab and at various moments, the audience gasped as his steel tendons and strength is put to the test grabbing tiny holds with just the tip of two fingers. Successful many times, while plunging from great heights other times. Chris concludes the first ascent on the island and celebrates by naming the route after his daughter.

In modern day rock climbing, 5.15 sits at the top in difficulty and remains a grade that is earned by a handful of men and never a woman, until a 19 year old from Boulder, CO sent it not once, but twice. The second film, Break on Through, focuses on Margo Hayes who graces the cover of the REEL ROCK posters. A goofy soul whose goal-oriented mindset and determination was evident even at an early age. Margo always carries a journal that she writes her goals down and swiftly gets to work adding new ones once she achieves them, even doing so immediately after sending the 5.15. One anecdote told of her gymnastic days as a kid where her serious attitude in training was shown when she broke her foot, but not letting her gymnastic coach know, she would take frequent breaks to the restroom, where she ices her feet in the toilet. When she finally sent La Rambla, her first 5.15, her reaction is one of utter pure joy and its image has become iconic and seen across various news outlet, magazines, and social media. The few men that have climbed a 5.15 have relied on power for many of the moves, but where she lacks in power, she makes up for using her extreme flexibility to make her way up the wall, many moves of which that left the crowd wide eyed and bewildered. 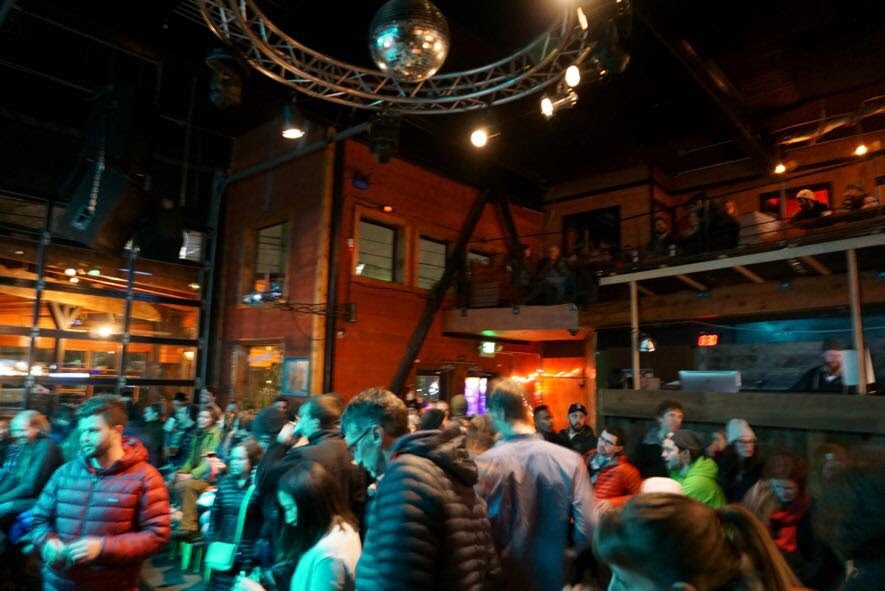 The most well-known name in rock climbing is Alex Honnold whose free solo ascent of El Capitan in Yosemite earned him fame and fortune with a sponsorship from North Face and his face seen all over the climbing world. A google search even reveals the diet he undergoes to prep for such a daring venture. The third film, Safety Third, focuses on another free soloist climber who is up in coming in Brad Gobright who seems to appear quite the opposite of Honnold. Where Honnold stands at 5’11, lives by a strict vegetarian diet, and is valued at $600 million. Gobright stands at 5’6, eats anything (his love of fast food and donuts is well documented), and is valued at $600 in one comedic image that compared the two. But that’s where the difference ends, as Brad Gobright himself is a well-known free soloist whose climbs have been seen as reckless in the climbing community with one spectator stating that we would be mourning his loss the following year. Indeed, the world did come close to losing Gobright when attempting a notoriously difficult route. He slipped, fell, and broke his back. In what should have been a somber moment in the film, Brad’s quirky and goofy nature continues to add to the comedic through line of the film. Alex Honnold appears in interviews to roast his fellow free soloist as well. The risk and dangers inherent in climbing has been diluted, but Brad Gobright’s exploits on the faces demonstrates the barriers that can be broken by taking risks. 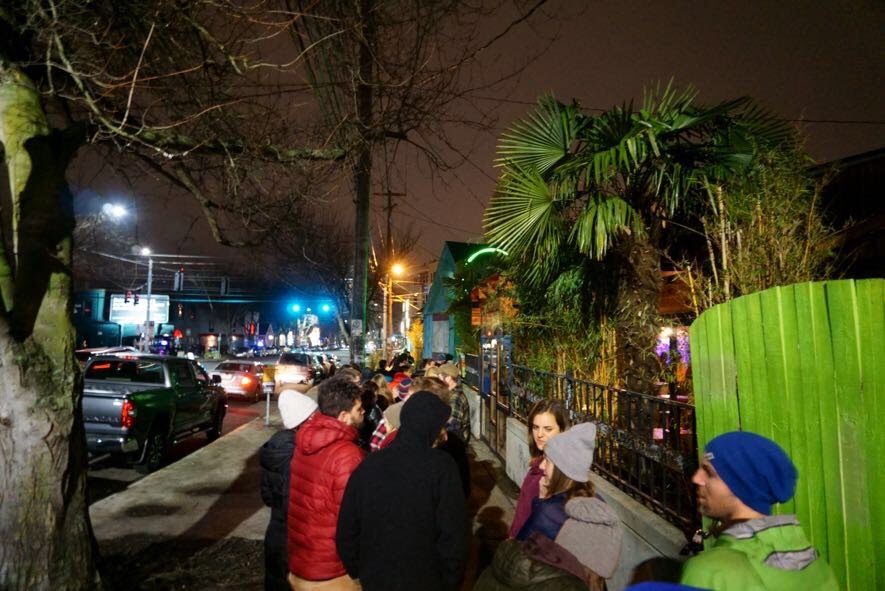 “I don’t want to be known as just a one-armed climber, I just want to be a good climber” says Maureen Beck who is the subject of the fourth film, Stumped. Fueled by carbs, cheese, beers and joined by her climbing partner, James Scheri, who climbs one legged. They’re not here to inspire though, they seek to change the narrative on those with disabilities. False deflated expectations of disabled athletes have left viewers in awe of Maureen taking whippers after whippers while pursuing her 5.12 project. With no attachments or prosthetics to her stump, Maureen’s climbing style is truly unique and her process in approaching projects mirrors the carefree attitude of Brad Gobright. Once it’s time to climb though, she gets dialed in and after 54+ attempts on the Days of Future Past 5.12, Maureen overcomes a crux sequence that halts her attempt after attempt. Maureen’s skills and intellect in overcoming challenges in the projects she pursues places her amongst the best climbers in the world.

The films of this tour with its heroines and heroes all embodied things that I found connection with. Chris Sharma’s primal roar with each move and the sheer power behind them models how I want to not only approach climbing, but life overall. With that fierce tenacity with every move. The man was a rockstar on the rock wall. Flexibility is key to being a successful climber and Margo Hayes demonstrated the importance of that in elevating one’s climbing abilities. Her peppy optimism and enthusiasm in training and climbing overall is infectious and left me eager to climb. Brad Gobright, whom I relate with, stands at 5’6 and has to extend fully with each move on his ascent. Despite that, he has free soloed routes that not even legends like Alex Honnold would touch. His diet mirrors mine as well in that its full of shitty nontraditional meals one would expect of professional athletes. Maureen’s example inspires one to step outside their comfort zone and push their limit. The through line of these films is that you don’t have to have a certain build or certain attitude to be a successful climber. I encourage checking these films out!