I’ve read time and time again that art is a reflection of humanity and our time. After 30 years on this planet I’ve realized that protests are truly one the greatest masterpieces of human creation. Protest reflects humanity: our rage, our hunger, and our inspiration for change. There are many different ways to protest, but my favorite experiences are the disruptive ones. I love to rally, I love to march, and I love to listen to the voices of those leading the chants.

It feels wildly fitting to write a long metaphor about the art of protest for Tai’s blog, considering the fact that we met nearly a decade ago from the world of art and music festivals. Tai is the founder of Compose Yourself Magazine and a Board Director at Don’t Shoot PDX. The beginning of our friendship was actually a road trip out to Buku Music and Arts Festival where we lived out our Almost Famous dreams. This was long before my activism days, and before I was as aware of the flaws in the society of which we live.

The Austin Black Lives Matter protests, part of a much larger and necessary global movement, were the most life changing protests that I have ever experienced. There was a stark difference between the weeks in which they occurred. What I experienced during those first weeks of protests fundamentally shook and changed me as a human being.

The first week of BLM protests solidified the fact that police brutality is absolutely real in our own backyards, especially when it comes to predominately Black communities. I’ve protested for many different causes over the years, but I’ve never experienced the mistreatment from law enforcement that took place during the Austin protests the week after George Floyd was murdered. 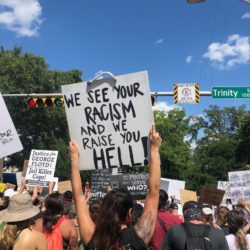 As a self-proclaimed journalist I felt it my civic responsibility to attend week one of protests as a peaceful observer, despite it being officially cancelled last minute by Austin Justin Coalition. This is due to the fact that I had heard many rumors of police misconduct from the night before, and I wanted to see what was happening on the streets with my own eyes. Many people did not get the memo and showed up to the march. We marched from The  Texas State Capitol to Austin City Hall in the middle of the afternoon. My friend and I made our way to the front of the crowd of unarmed civilians marching for racial equality.

“Crack,” I heard a deafening sound, similar to that of an assault rifle, that made time stand still and my heart sink to the bottom of my stomach.

I automatically assumed it was gunshots being fired at us by counter protestors. This caused mass chaos amongst the crowd, because most of us assumed that we were being attacked and began running for our lives. I grabbed my friend’s hand and we ran through the crowd to safety.

It didn’t even cross my mind at the time that it was actually APD firing off tear gas into a crowd of unarmed, nonviolent Austin residents.

I got to safety and collected myself after the initial shock of the fact that it was my own city’s law enforcement that tear-gased us. My friend and I walked around with our homemade first aid kits. I heard the screams of a girl who didn’t even look 18 years old, completely debilitated. She was crying out that her face burned. We fanned her and tended to her wounds with our homemade tear-gas solution.

Since I am using an art festival analogy here, I will compare this to my worst festival experience ever.  One where there is a major catastrophic event of nature, and the festival organizers are grossly under-prepared; therefore, throwing their patrons into serious danger.

Except this was real life. Except the festival organizers are actually our own government, protest patrons are those fed up with racial injustice, and the harm that they are throwing us in is actually the arms of police officers. This is a million times worse than any festival scenario of my wildest nightmares.

During this first protest several more tear-gas canisters were thrown into the crowd. I was scared for my life, discouraged from exercising my American right to protest, and left before 5pm.

I went back downtown the next morning with gloves and trash bags to clean up around City Hall and The Capitol. While near the Capitol, I witnessed a young Black woman by herself screaming on the top of her lungs that a cop was harassing her. I watched that APD cop follow her for several blocks. All she was carrying was chalk. My friends and I rallied around her and walked her towards the direction of her home for several blocks until the APD officer finally quit following her.

What was she doing to look so suspicious?

Writing bible versus with chalk on the sidewalk as a Black Woman in Austin, Texas. She didn’t deserve that harassment. Please don’t try to victim blame her the way society often victim blames victims of domestic abuse. Don’t you dare try to look for what this innocent Black woman may have been “wrong”.

I received a text from her later that day. It broke my heart, reading:

“I made it home safely thank you so much! Im the girl with chalk writing bible scriptures let me know if you see them walking around. I couldn’t thank you guys anymore but THANK YOU SO MIUCH for making sure I would be sage. I wish more people would come together like that. There should be a rule ‘call you neighbor before you call the cops’.”

I did see a stark difference the second week or protests in law enforcement treatment, thus making for a more beautiful and safe environment. The Black power and Black joy that I witnessed that day brings me to tears every time I think about it.

The sea of people that I witnessed holding their “resist” fists up at Huston-Tillotson University to kick off the march was breath-taking. At least ten-thousand Austinites showed up to make a statement that Black Lives Matter. People of all races, all classes, all ages and all background marched in solidarity and peace. 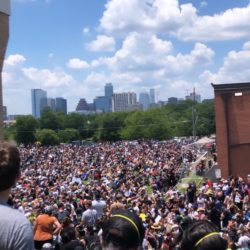 Melanated artists muraled streets, writers took to signs, and speakers inspired. Black photographer captured the most powerful of moments. I saw glorious Melanated cowboys parading around while riding horses in front of the Texas Capitol, all while the crowd cheered them on. This was better than any music and art festival that I have ever had the privilege of attending.

There was no tear gas or rubber bullets this time. Black people finally felt safe enough to celebrate themselves and their communities, with their communities and allies. This is not nearly enough, nor does it excuse the disgusting behavior of our law enforcement in the country. However, it is a start to the long road of work we have ahead.

It is possible to have more than one emotion at once, and there was a tinge of grief within the midst of the celebration. It was a mourning for the unjust cruelty of law enforcement, and for the innocent lives lost to the hands of those “protecting and serving”. This grief and heartache is the major factor inspiring the changes that BLM is demanding.

Lets acknowledge the sins of our country so that we can allow true Black joy to prevail.

“I cant think of anything that is going to be more powerful toward catalyzing change in this moment than Back People in their joy.” -Sonya Renee Taylor