This Saturday at Cervantes’ Masterpiece Ballroom prepare to laugh, cry, scream, and wet your pants. Flushing Queen’s Action Bronson will be taking over Cervantes joined by his right hand homies Meyhem Lauren and Roc Marciano. The White Bronco Tour is named after Bronson’s latest album and started in Boston on February 11th. Bronson has been on fire and we’re ready to check out the summation of his live set. Don’t forget to check out The Other Side too with the hometown heros The Party People, Recess, Soul Atomic, Sassfactory and Sound Guy Josh! 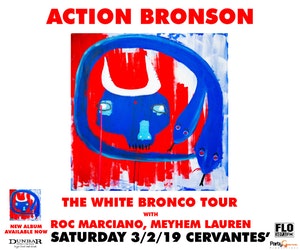 Before White Bronco, Bronson hadn’t released an independent project since 2012. Here at Compose Yourself, we’re huge fans of all of Bronson’s work; from Blue Chips 2 to 7000 and everything in between, we’re here for all of it. While fans see some familiar producers on White Bronco (Alchemist, Harry Fraud, Party Supplies), the project has a noticeably different feel than his previous two albums. Bronson seems to be in a good place recently, stating in interviews that he’s been spending more time focusing on pottery and other forms of artistic expression as well as dialing in his live performance. His show at the Ogden in 2017 was one of my favorite of the year, and his expressiveness and energy on stage is incomparable. While we expect to hear plenty of White Bronco on Saturday night, one thing I respect about Bronson is he delivers cuts from all across his discographic spectrum. “Contemporary Man” is a multi-instrumental fan favorite from his 2013 release Blue Chips 2. He threw down the track both times I’ve seen him live; his vast musical resume gives him a deep pocket to pull tracks from. Without a visit from Bronsolino in almost a year, Denver’s ready to party with the legend once again.

Joining Bronson on the White Bronco Tour, Meyhem Lauren is Wales’ favorite shrimp loving MC. A consistent crew member on Bronson’s cooking show “Fuck That’s Delicious”, fans of the show have already connected with Lauren based on his tough-on-the-outside, gentle-on-the-inside demeanor . His recently released single “Still Playing Cello” was produced by Alchemist and has given fans a taste of what 2019 has in store. While you wouldn’t want to go head-to-head with Lauren in the booth, you might want to sit down with him at the local Jamaican spot for a plate of curry goat. We’re psyched to see what he has in store for Saturday.

A veteran to the rap game, Roc Marciano has left a serious footprint in the world of music. A former member of Busta Rhymes’ crew, Marciano started his own group, U.N. in 2001. Appearing on Wu-Tang’s Wu Tang Meets the Indie Culture, Marciano’s recognition from the legends of the industry shouldn’t be overlooked. With the release of his fifth studio album Rosebudd’s Revenge 2: The Bitter Dose a little over a year ago, Marciano has been keeping his music train chugging and we’re excited to see what’s to come on Saturday.

Buy tickets to the show here!