If you’re looking to add an innovative and eccentric band to your music palette, we’ve got just the guys for you. Thumpasaurus are setting bold new standards when it comes to their live performances, and 2019 is prime time for you to really see for yourself. The genre-bending band is revered for their high energy and affinity for bringing the ‘Thump’ in everything they do, and after catching one of their music videos, ‘Mental Karate’, we considered ourselves fans instantly. Lucas Tamaren, Henry Solomon, Paul Cornish, Logan Kane and Henry Was are offering up punk-funk stylings like you’ve never heard. Fortunately we were able to snag some time during their tour stop in Denver last week.

Read on to get hooked.

CYM: Thumpasaurus is a self-described punk-funk fit that fuses high energy music, immersive performance art and even light opera. You guys definitely paint a wild picture for those unfamiliar to the THUMP. Walk us through how you all met and decided to start the band.

Thump: We actually started as a folk band in college at USC (The Neighbors). As we developed, we started to play house parties, and realized that our mellow acoustic music wasn’t going to cut it in a room full of drunken undergrads. Still, we would play anywhere we could, living rooms, roof tops… sometimes we’d play in the middle of this halfpipe, and people actually would fall down the ramp into the band mid set. We take every chance to figure out how to get people dancing/laughing/questioning what to do with their limbs, and Thumpasaurus is the most-up to version of what we’re learning.

CYM: With all of you hailing from different cities and backgrounds, what are some musical trademarks and techniques that you feel give each track the Thumpasaurus sound?

Thump: We work on a track until we feel it has “the THUMP”. It can be hard to say what that really means, but you definitely know when you hear it. A huge factor is way that everyone in the band plays locks in with each other, and the way that they bring themselves to their playing. We usually record with everyone in the same room, without sound baffles or isolation or a metronome. We do stuff like run saxes through octave pedals into guitar amps, keyboards through distortion pedals, etc. And just get it all in the room mics. Its imperfect, but we’re cool with that as long as it THUMPS.

CYM: If you could curate your dream tour, what would it entail? Lineup, ‘tour theme’, etc.

Thump: Thats tough. We all really love KNOWER… they’re definitely a huge influence on us and really awesome people. The way they work and dedicate their lives to their art is really inspiring, so that would be really good to be around. It would be amazing to work with them and then add something crazy like Death Grips. They push their music and live show in such extreme directions and we really definitely appreciate that. There’s just so many more its kind of crazy… Bjork, Erykah Badu, Gogol Bordello, Taylor McFerrin, Meshuggah, the list goes on. We feel like Thump will work with anything. The way we see it, we’re just making pop music that works for our ears, and one of our goals is to figure out how to make that as universal as possible. 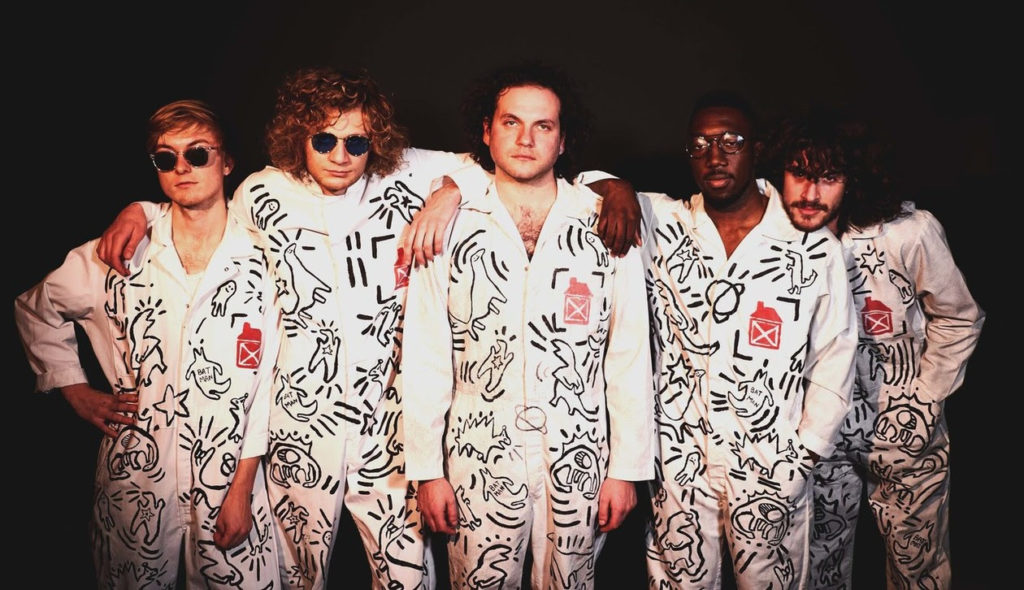 CYM: You guys will be hitting some epic festivals this year including Firefly, Electric Forest, and Peach Fest. EF is actually my favorite – I hope you guys get enough time to dive into all of the mystery the Forest offers! Are any of the band ‘festie veterans’?

Henry Was: I actually played at EF with Justin Jay last year and had the time of my life. We played upwards of 20 shows over the course of both weekends, and I’d love have that kind of presence with Thump this year. I’ve been going to festivals since I was 15 (Coachella), and its always represented this sort of ultimate stage for creativity and collaboration. I love that a festival is somewhere where people just walk around looking for magic, and with a band like Thumpasaurus, I really feel like we can be that random thing people discover at 3pm and never forget. We’re definitely going to test the limits of our imagination with these shows, and push the limits how much craziness we can pack into a stage 1000 miles away from home.

CYM: I read that most of the band studied jazz in college – I think it’s a great genre for artists to learn improvisation, harmony etc. How big of a role would you say jazz plays within the band?

Thump: It definitely depends who you ask. Some of the band might consider themselves jazz musicians outright. Others identify less with that, but still embrace jazz and all it has to offer. We all head to the Blue Whale (LA’s most legendary jazz venue) to see shows, and a bunch of us play there all the time. Paul is actually getting his masters in jazz piano at UCLA’s Monk institute, where he’s studying with Herbie Hancock and Wayne Shorter.

CYM: Walk us through a typical day off in the world of Thump.

Thump: Days off don’t really exist! We’ve all really committed our lives to music and to Thump, and we just feel extremely lucky to be able to invest that kind of time into this straight out of college. Wether that means practicing all day and making a track at night, or animating videos in photoshop and powerpoint, or working on behind the scenes stuff like PR and tour planning. We all have different roles, but we are pretty much clocked in 24/7. That said, one thing we can all agree on is a good nap on the tour van and finding the absolute best food available on yelp! (Ideally tacos).

CYM: We’re stoked to see more of you guys in 2019! Tell us what’s on the radar for the band this Summer and beyond.

Thump: There’s so much! We’re currently in the middle of our first full-US tour (we’re speaking form Minneapolis currently), supporting our first full-length album The Book Of Thump. We just put out what we’re calling a ‘dance opera’ called “Where Does The Love Go”, which is accompanied by a full-length visual journey created between our Projectionist Ben Benjamin and Lucas (travoltalovequest.com). We’re playing our first major festivals this summer, and hope to return overseas to rejoin all our friends and fans we made during our last two years at the Edinburgh Fringe Festival. We’ve got so much music that we are excited to release, and we’re also starting to collaborate with other artists. Piggybacking off of the collaborative EP we put out with Justin Jay, we’re releasing a full album of Book of Thump remixes, as well as some more collaborative original content.

We’re mainly excited to keep introducing people to the THUMP and improving ourselves as musicians and people. In college we felt like we needed a space to move our bodies and be silly without worry about if it was the cool thing to do, and Thumpasaurus has definitely become that for us. If we can provide that to other people, thats a success for us.

Check out the newest video from Thumpasaurus,’Where Does The Love Go’: