The holiday season is the perfect time to give back, and is there any better way to do it than to throw a beer festival with a stacked lineup? We think not.

Kicking off the holiday season with his annual jam-filled beer tasting festival, Kyle Hollingsworth and Conscious Alliance brought a slew of talent to their Hoppy Holidays dual venue event at Cervantes. The proceeds from the event are put towards supporting Conscious Alliances’ goal of assisting at-risk communities through food relief and empowering the youth. Holding down the Masterpiece Ballroom, Casual Commander (also known as Kevin Donohue of Sunsquabi) opened up the night for The Kyle Hollingsworth Band. The Other Side featured Exmag, Denver trio Nobide and funktronica band Tnertle. While last year’s event at the Fillmore featured a more engaging beer tasting party, this year’s high magnitude of music more than made up for its less hoppy experience. 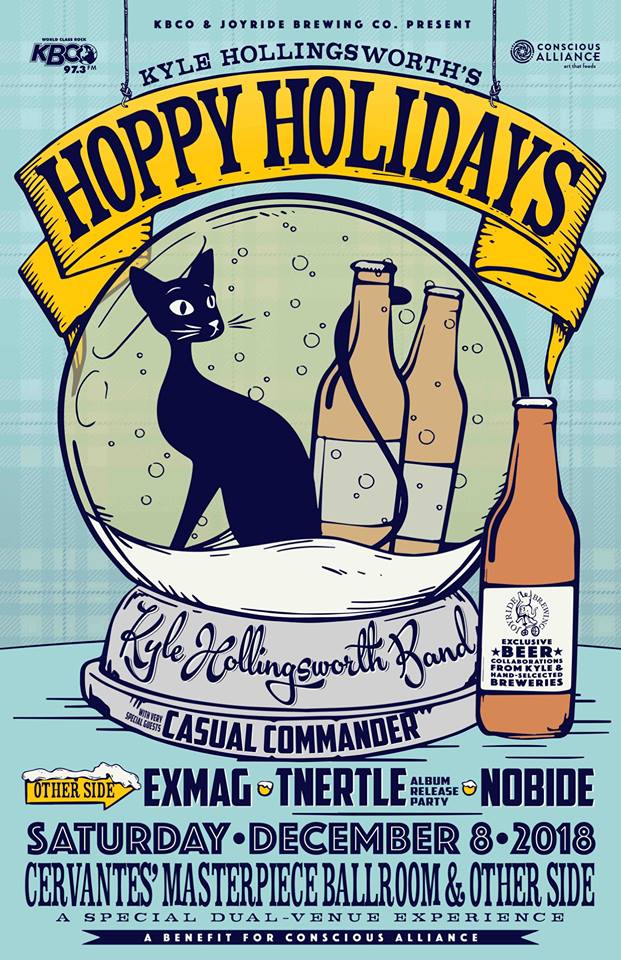 Kicking things off in the Ballroom, Casual Commander was truly a one man army of jams. Mashing hard hitting beats with flavorful guitar licks, Donohue’s solo show had the crowd vibing in the early hours of the night. His performance was dialed in, and he appeared totally on top of the song transitions while effortlessly shredding on top of the kicks and snares from his backtracks. Meanwhile, at the Other Side, Nobide had a strong showing of their own going on. The trio is made up of producer Nick Vann, drummer Matt McElwain, and guitarist Ted Kleist, and were joined by guest saxophonist Tanner Fruit. The group’s smooth build-ups paired with Kleist’s melodic riffs gave the band’s sound a clear direction. McElwain was also a powerful driving force, keeping the rhythm alive and pushing the levels of energy in the jam. Their ability to alternate between upbeat dance tunes and deeper, spacey bass tracks kept the set interesting and made the music accessible to fans of a wide variety of genres.

Next to take the stage on the Other Side was Denver’s most bodacious and turtlish live electronica band, Tnertle. Fresh off a West Coast tour, the group played through their recently released album Burning Down the Sun. The band consists of Trent Campbell (Midi Controllers, Bass), Kyle Ayervais (Drums), Leah Concialdi (Sax), Alice Hansen (Trumpet), Jon Kenney (Trombone), Ty Hughes (Guitar), and Ray Salazar (MC). The band’s sound mashes many genres including funk, soul, electronica, hip-hop, jazz, and international music, creating a collage of sound that is loved by fans with deep roots in music theory and those that just want to dance to catchy melodies.

They’re set at Cervantes was the finished product of a West Coast tour that left the band with a calculated and clean performance of the new album. Trent was unafraid to bring back some of his old favorites as well, finding room for “Dance All Night” about halfway through the set had every body in the crowd moving. “Enzo’s Attempt” has been a favorite of mine since, it dropped on the new album – the Kanye esque digitized vocal sample along with the swinging horn section just fills the listener with all the feels of trying to embrace something new while not wanting to let go of what you have. While they didn’t open with “Cropstopper”, Campbell’s placement of it in the set was perfect. The effects on the smaller sax that Concialdi played during the song were unlike anything I’ve ever heard played from a horn, and her comfortability while performing the section just truly took the whole experience to the next level. All-in-all, the performance gave the album a new life, and built up a project that I already considered one of my favorites of the year.

After Tnertle’s set, I switched sides to watch the keyboard wizard Kyle Hollingsworth work his magic with a crew of all-stars feeding the crowd non-stop jams. The super group would fluidly bounce off each other and give bandmates the opportunity to lay down solos throughout the set. While I was only able to catch a couple songs from Exmag’s set, their sex-funk is always a blast to dance to. Overall, the night had no shortage of fire music, and every artist/band came with their game face and a powerful performance. Big thank you to Cervantes, Conscious Alliance, and all the bands, artists, promoters, and fans that made it happen! Looking forward to next year.