Turning a new page in his production style, Wisconsin-born Garret Meyer, better known by his stage name Artifakts, dropped a new project titled Glow Up on Thursday, September 6th. In Meyer’s own words, “Glow Up is a project I’ve created stemming from traveling around the US over the past year. Typically, in creating music, I’ve found myself shut in, honing in on very introspective thoughts and the moods those bring. Glow Up is a detour from those ways, in that I was constantly graced with very stimulating and positive energy. Collaborations with friends, exploring new cities, and taking on new challenges has led to a more energetic avenue of expression for me.” 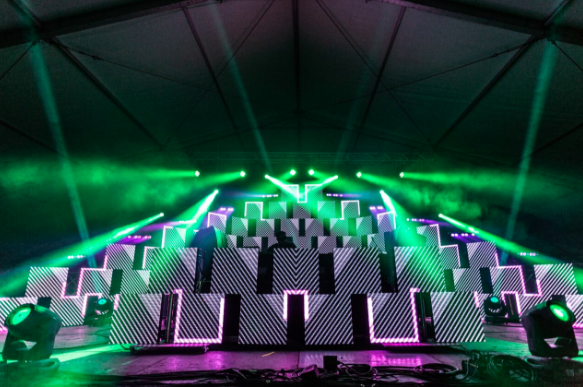 The Compose Yourself team gave Meyer’s new project a spin and broke down our thoughts on each song. The EP flows nicely together and the order of the songs was chosen perfectly. Each track incorporates a new feeling or musical element to the project and gives the EP a sense of direction.

Starting from the top, the intro track ‘Relentless’ gives listeners the feeling of being strapped into a shuttle that’s about to launch into the thermosphere. Throughout the track, Meyers samples Rob Base & DJ EZ Rock’s “It Takes Two” with the “I wanna rock right now” line. Building up a heavy drop about a minute-thirty into the track, Meyer drops it with that all-too-familiar “Don’t Stop” sample from French Montana’s song ‘Pop That’. The track mellows out afterwards; towards the end, Meyer fills it out with what sounds like some spacey arpeggiator sequencing. The track is a great fit for the intro and sets the tone of the project.

If ‘Relentless’ was the space shuttle’s takeoff, ‘DIA’ would be the travel to the first destination. ‘DIA’ has a lot going on; the track starts out calmly with a melodic synth chord progression but quickly falls into a far more chaotic state. About halfway through, Meyer builds up a bridge that leads to a wonky bass sequence followed by an array of analog sounds that truly gives the impression of a high speed space ride. The durastic switch-up in energy on ‘DIA’ gives the track a truly dynamic feeling.

Arriving at the moon with track three, ‘Lunar’, Meyer’s impressive incorporation of elements of jazz and funk shine through. The beginning of this song is far more laid back than the chaotic ending of ‘DIA’, however towards the end, Meyer switches gears drastically. Throwing some phat horns over a groovy bass line, the first half sounds like a hip-hop jazz session. Leading into the end of the song, Meyer’s cuts up some vocal samples during a build up which takes an unexpected turn at the drop with a variety of crazy effects thrown over his synthy bass tracks.

The next song up, Meyer’s collab with Manic Focus, ‘To The Beat’, begins similar to ‘Relentless’ in the sense that it starts with a simple melodic chord progression over a drum line. This song, however, began with a string sample, possibly a violin, instead of synthy piano intro. Also, the energy of the track picks up way faster than on ‘Relentless’ with heavier bass much earlier in the song. Following the pattern of the project, Meyer and the Manic Focus boys build up a crazy drop about two minutes in. This time, the drop is accompanied by horn samples and a piece of a hip-hop vocal that sounds like it had the highs cut off and was transposed down a couple octaves. The delay that Meyer uses on his drops throughout the project is unusual in the best sense of the word. It’s almost as if he knows when we expect the bass to come in on the drop, and purposely gives us a split-second delay to put emphasis on whatever sample/track he wants to accompany the drop.

Giving us all the outer space feels on the final track ‘Bombs Away’, Meyer’s emphasis on the boom-bap style of his drum samples gives the song a Break Science-esque electronic hip-hop feel. The build up in the intro gives this one energy from the start. Through his use of layering, Meyer is able to take this track from a fairly simple boom-bap instrumental to a space synth jam once adding the interesting chord progressions that come about two minutes into the song. ‘Bombs Away’ is definitely a fun space banger that ends the project nicely.