One of Denver’s funkiest electronic hip-hop trios, The Party People, are setting up for a big one this Friday at Cervantes’ Masterpiece Ballroom. The group is made up of producers Mikey Thunder and Mr. Bugatti as well as MC Benjamin’s Vibe. It’s safe to say these three are on the same wavelength; whether it’s their taste in beats or their opinion on a show, The Party People stay on the same page when it comes to music. This Friday will be their first time headlining the ballroom and from the sounds of it, they’re pulling out all the stops. 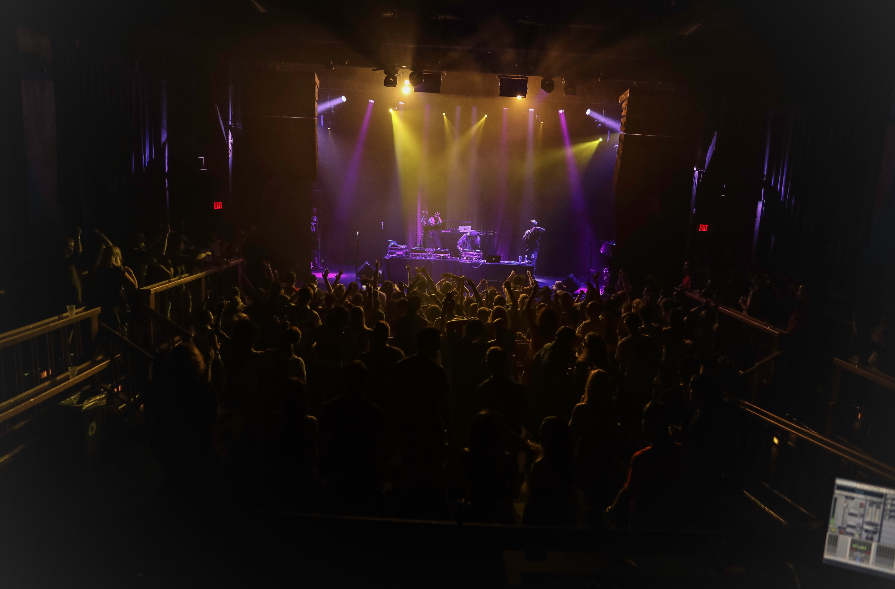 The trios rambunctious style combines elements of jazz, blues, funk, hip-hop and electronic music. They’re phat beats and clean mixing make it impossible for listeners to stand still. Alternating between freestlyes and written verses, Benjamin’s Vibe throws down verses over Mikey and Bugatti’s heavy instrumentals. Their name is the farthest thing from a lie possible; it’s always a party when you’re with The Party People

In anticipation of the show on Friday, we sat down with The Party People to talk about the group’s origin, new music, and their upcoming set.

So when did you guys meet?

Ben: Well, I had just done a song with Defunk and shortly after Mr. Bugatti over here hit me up on SoundCloud and was like ‘yo this track is super tight’. I moved back to Colorado, was playing music, and checked out his SoundCloud and was like ‘yo, me and my friend are playing this pinball bar in Idaho Springs, do you want to come?’ So he came up, we had fun. He brought a bunch of homies and rented a little hot tub room at the motel we were staying at…I was like ok, this kid parties. Then, the next week he was like ‘yo, you want to come play with me next week at 1up Colfax?’ And I was like ‘barcade…cool yeah I’m down.’ So that’s when I met Mikey, it was probably around 2014 when I first met them.

Mikey: I met Bugatti at an E-Tuesday battle, which were kinda like DJ battles put on by Submission at Cervantes. Shoutout to Submission by the way.

Bugatti: It was like a Sonic Bloom DJ competition. My first Sonic Bloom ever, Mikey was my tour guide for it. But yeah, Ben put out this sweet Defunk-Pretty Lights remix; I hit him up on SoundCloud and I didn’t even realize he was from Colorado. That night in Idaho Springs that Ben was talking about, there is actually now a noise ordinance in that town. It’s because of me and this kid. The first time we played a show together, and now you can no longer play electronic music there.

But yeah, Mikey invited me to be the resident DJ at 1up on Colfax in 2014 when I moved back to Colorado. It was my birthday show, and I invited Ben to come rap at the show.

Mikey: We definitely connected through our love for all the same types of beats and vibes.

Ben: We were some of the few people at the time, at least in this state, that were playing the same style as music. So with my solo project, I DJed and rapped, which isn’t as cool as The Party People, you know? I just mix, I’m not like a full-on real DJ. So when we came together it just felt natural. 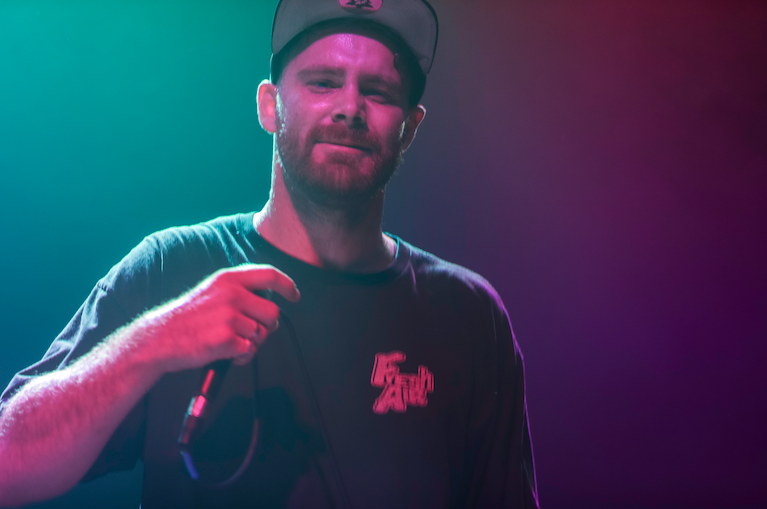 Tell me a little about the first Party People set.

So we were just sitting around deciding how we wanted to do our set, and we were thinking about what we should call it. We through out a few names, then Mikey was just like “The Party People’ and I got goosebumps.

Mikey: I had been holding on to that name for like 2 years.

Dan: You gotta tell me them about the second Party People show too.

Mikey: Was that Opiuo?

Dan: It was an E-Tuesday show – I asked Mikey ‘hey man, I’ve got a Tuesday battle if you want to join’. So I brought Ben and Mikey and we crushed it but I got disqualified for having them with me haha. But yeah, Opiuo played a DJ set that night and it was basically a competition among the openers to have the best set. We had a great slot too, it was packed. We played right before Templo and Opiuo. 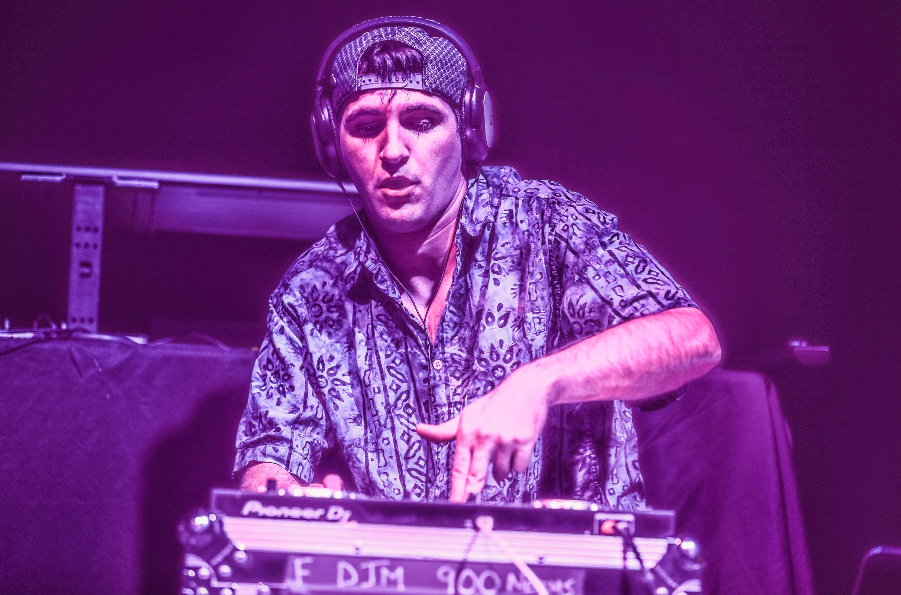 Mikey: So with the E-Tuesday battles, we’ve had have a history of winning, being disqualified, and forfeiting.

Dan: You gotta be well rounded.

Mikey: ..So should we tell him the story?

Ben: This is really what solidified our bro-bond; our DJ man-band. So we were leaving Fort Collings heading to Jacksonville, Wyoming and had one of those old school GPS. Dan was driving and had turned down the volume on the GPS.

Dan: They were asleep and I went the long way. Mikey woke up and was like ‘what the hell?’ and I was like ‘I’ve never driven up here before’ and it was his older car.

Ben: So, Dan got tired and asked to switch, so I take over. We’re going over this hardcore mountain pass. The engine starts revving like crazy and I hit the brakes, but the car doesn’t stop. It slows down to like 55 mph but that’s it. So I tap Bugatti, and I’m like ‘hey man, I can’t get the car to stop’. So Mikey leans forward, and is like ‘hey man, just hit the brakes’ haha and I was like ‘no man, I tried and they’re not doing anything!’

Mikey: With the brakes pinned all the way down, we were still going a decent speed on this mountain. So we were trying to decide if we wanted to ditch the car and let it fly off the mountain or into a ditch on the side of the road.

Ben: I eventually turned the car off when we hit a hill and just coasted up it. We finally got it to stop and popped the hood. Turns out the oil cap was pinning down the throttle. We had to drive through the rest of the range with the brakes totally shot, and ended up using all the money we made from the tour on fixing the brakes.

Talk a little about your roles in the group.

Ben: I’m the master microphone commander haha. We all kinda come together when picking out our songs for a show. Bugatti often does the spine, the main planning and production of the show.

Mikey: We all kinda plan the shows together and debate the mix as a team. Bugatti and I collect all the music – we usually end up buying the same songs.

Ben: I just care about the final filter list, as long as I know what’s coming, I don’t really need it in order. Mikey does the acapellas and scratches. He does the production with Bugatti as well. I write my verses and rap them obviously.

Dan: I do mix-downs and production mostly.

What are each of your favorite Party People sets?

Dan: That’s a great question. I would have to say Sonic Bloom. Probably this year.

Mikey: Every Sonic Bloom has been really fun. The crowd energy is always huge. Also, Gem and Jam was a really fun one.

Mikey: At Arise, we had choreographed dancers and other festival styled stuff. We’re planning to bring some stuff like that to Friday’s show.

Before we get to Friday, tell me a little about A Bunch of Loose Cannons and Hidden Treasure

Ben: There was a while after we put out our first EP, we were recording once a month. The edits weren’t really coming together and we kinda put it on the back burner whenever we would try new stuff.

Dan: There’s a song on there that’s over three years old.

Ben: These just kinda surfaced and we put a self-deadline on it. Also, we added a bigger foundation for what we have going.

Mikey: It’s also really been a learning process through different studios and sessions. Our first session on Saxxy was like six musicians & vocalist jamming and recording in a three hour session. Drums, percussion, bass, guitar, sax, we brought in Jade for the chorus, Ben wrote it on the roof. We tried to accomplish as much in a little amount of time. It was a hectic session. We learned over time to tone back the circus a little bit, kind of. 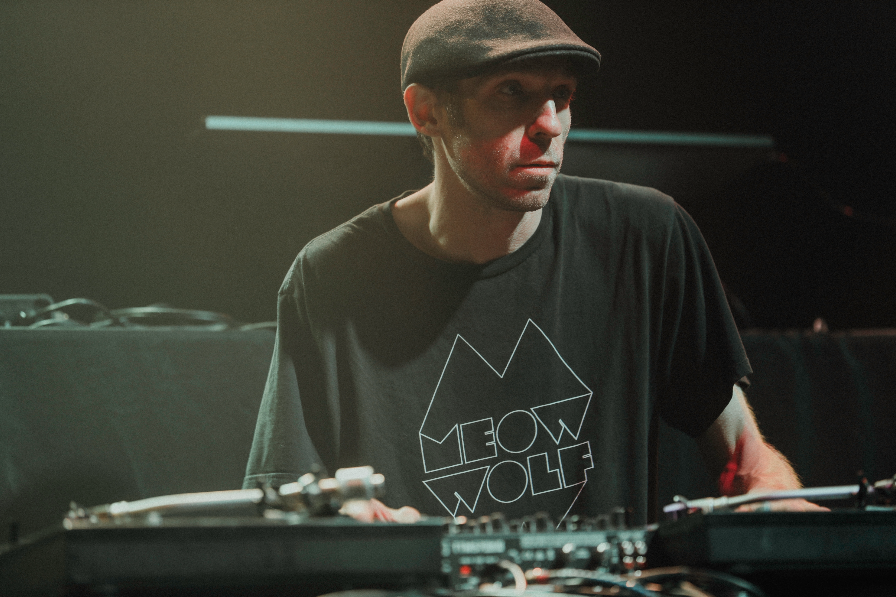 Who are some of your favorite artists to bring on stage?

Mikey: Deitch was super fun with the minimal drum kit. Oh and PHloEthik

Mikey: We have a bunch of special guests for Friday too.

So anything special planned for Friday that you want to talk about?

Dan: Lasers and one handed push-ups.

Mikey: Were gonna bring all the friends can fit on stage, as well as the lineup and lasers. Breakin out all the tricks.

Anything else you want to add?

Mikey: Just wanted to throw out a huge thanks to Scott Morrill and the Cervantes crew as well as Dave Sheldon and Euphonic Conceptions for their support.

Dan: Stoked to see everyone on Friday!

Don’t sleep on tickets for their show on Friday! Buy tickets here!

Check out The Party People’s SoundCloud by clicking here! 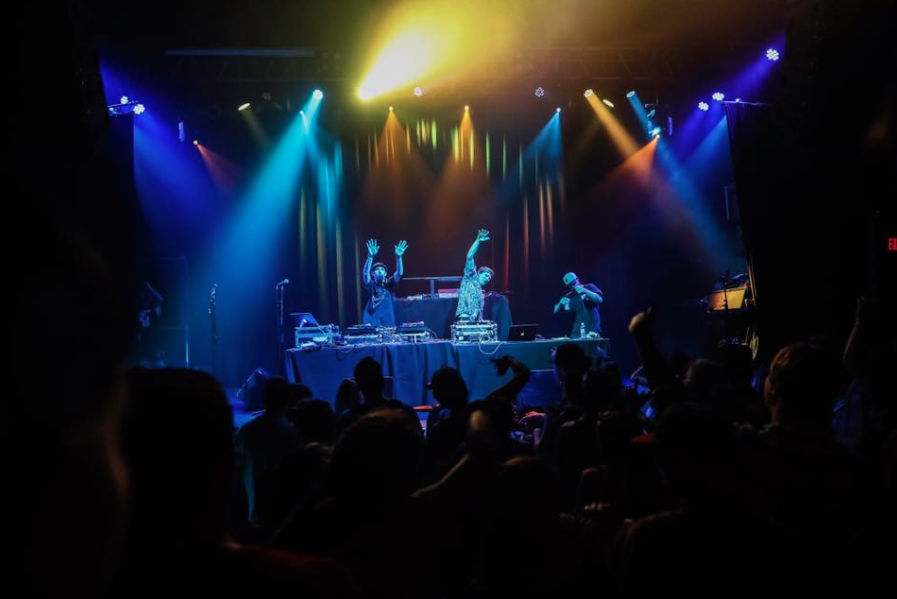