It’s been almost a month since Derek and the Pretty Lights team blessed us with an incredible jam-packed, rarity-filled Red Rocks experience. The entire weekend felt like a dream; seeing friends from all over collect to celebrate 10 years at Red Rocks with one of the top influencers of modern electronic music was truly special. 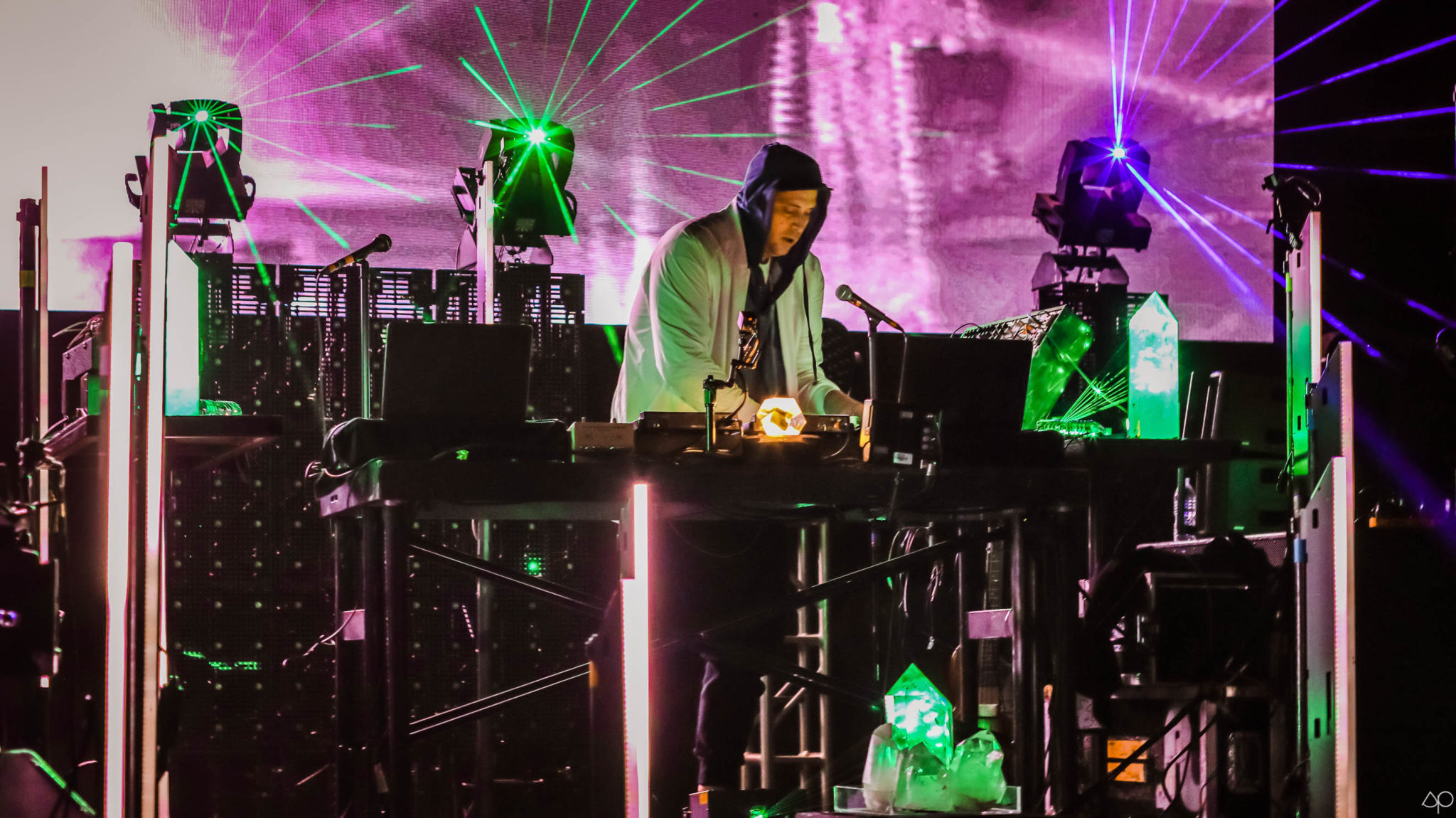 Starting it out with a bang, the weekend was kicked off by a sold-out pre-party headlined by Daily Bread and Artifakts sharing the stage for a B2B set. The bill also featured PL Live members Alvin Ford Jr., Borahm Lee, and Chris Karns playing an improv jam set, Philly duo Wax Future, and Cervantes Re:Search resident Mikey Thunder. The bill for the two nights at Red Rocks included Super Best Records member Mux Mool kicking things off on night one; his set was followed by original Pretty Lights member Michal Menert with his live band The Pretty Fantastics. Trophy Beats was the first one to hit the stage for night two, followed by The Russ Liquid Test. Pretty Lights Live played for over two hours each night with no set breaks; both sets were filled with songs across his discography including a heaping helping of tracks from his debut album Taking Up Your Precious Time, as well as a handful of unreleased songs.

While I know we’re all excited to talk about that night one ‘Shakedown Street’ closer, let’s start at the beginning. The Thursday night pre-party was a special event to be a part of. While the show was sold out, there was still plenty of room to move around and dance, which is always nice. Mikey Thunder opened the night with his funky hip-hop, deep bass fusions which set the perfect vibe for the music to come. He also played between sets, which helped keep the energy flowing all night.

Wax Future hit the stage after Mikey; the duo blasted the audience with heavy guitar licks and bassy drops throughout the set. Some highlights were definitely when they played ‘All as One’ and ‘Style Like This’. Both tracks hit hard, but the coolest moment of their set had to be when Keith gave a fan in the crowd his MPC to mix his guitar chords halfway through the set. The exchange was seamless and it was truly a connective moment for the artists and crowd. 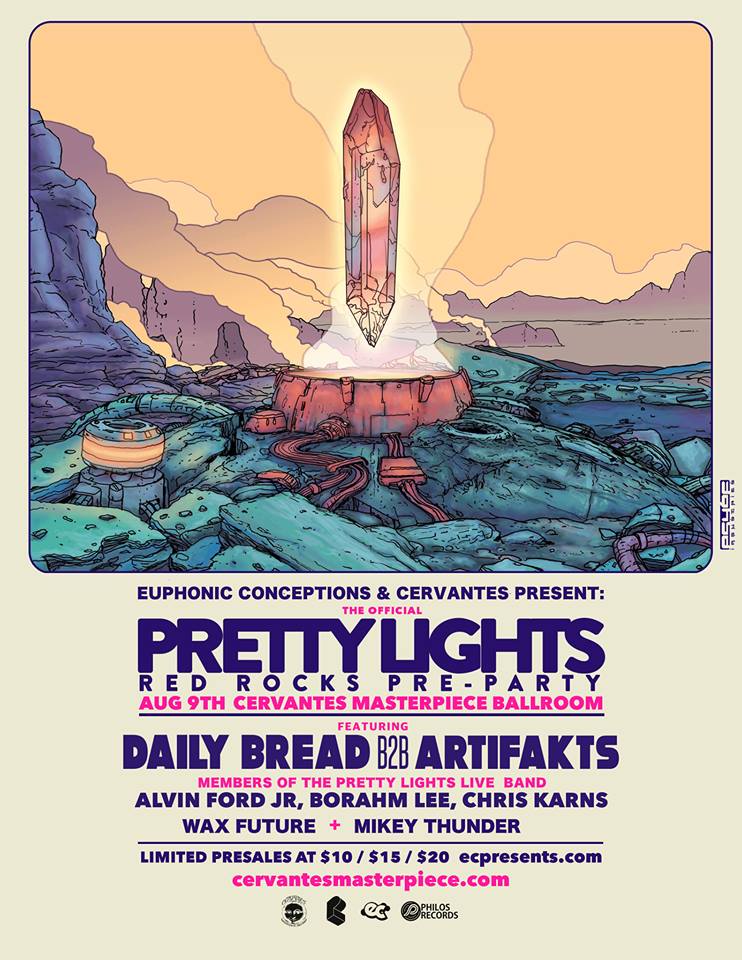 The PL Live crew was up next and did not disappoint. I don’t know where to start with this one; Karns slayed the sample choices and Alvin’s energetic drumming mixed with Borahm’s ridiculous soloing combined for a truly interesting mashup of remixes. While I didn’t recognize all the samples, a few jams stuck out to me. The first was the ridiculous rendition of Sister Nancy’s ‘Bam Bam’ that brought all the reggae vibes along for the ride. The second was their flip of J. Cole’s ‘KOD’, which they managed to cleanly sample the whole first verse and chorus of. While both jams were crazy, the top highlight is a tie between their remix of Anderson Paak’s ‘Bubblin’ and when Deitch came out to drum for their flip of ‘Finally Moving’.

While I thought their set couldn’t be topped, Daily Bread and Artifakts came with a game changing performance. Bouncing from new and old, the duo played through a plethora of favorites. ‘Surprise Ice in the Morning’ was fire to hear live, and I was not at expecting to hear Rhett’s remix of Fleetwoord Mac’s ‘Dreams’. They played quite a few songs from Rhett’s January release On the Daily. The two worked really well together on stage, and Artifakts had plenty of bangers in the set as well. The duo dropped Garret’s fire “Hot Like Sauce” remix that had the Ballroom bouncing. The preparty almost felt as special as the two following nights on the rocks, which is really saying something given the magical weekend that followed. Big shoutout to Philos Records, Euphonic Conceptions, and Cervantes for helping curate such an amazing event.

The first night on the rocks was the best ‘first night set’ I’ve ever seen on a two-night run from the PL gang. Starting from the beginning, Mux Mool opened up the night with his signature live beat-pad instrumentals that kicked off the night with some flavor. Menert’s set followed, Michal drew from songs new and old to show off his band’s musical diversity. ‘Summer Love’ is always a favorite to hear live, but it was really cool seeing the Fantastics play some of their newer releases including ‘From the Sea’ and ‘See You Again’. The direction Menert has taken with his band gives it an almost indy rock feeling, but his ability to work in elements of genres across the board keeps their music refreshing and funky. After officiating a wedding on stage, Menert joined Derek to play through a few tracks from the initial PL album, Taking Up Your Precious Time, to start off the Pretty Lights set. 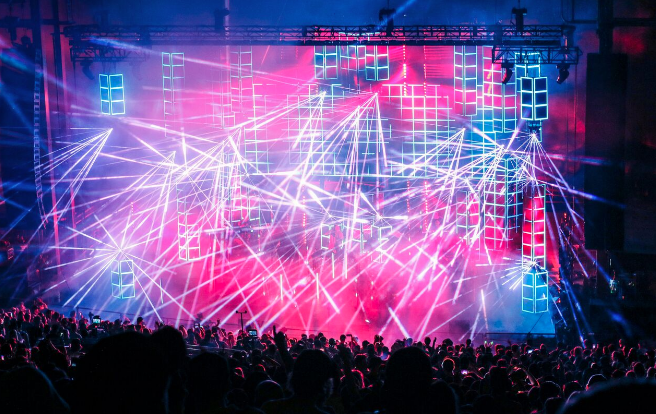 Opening with ‘Try to Remember’, the bar was set high from the start. Menert and Derek went on to play another fan favorite from their initial album, ‘Wrong Platform’ which the band played a massively remixed version of. After a bountiful applause from the crown, Menert left the stage and Derek went into a song he rarely drops from A Color Map of the Sun, ‘Press Pause’. The band’s flips were consistently fire through both nights and the ‘Solar Sailor’ remix was definitely one that stood out to me. Not to mention Greg Ellis, aka Lazershark, absolutely wrecking minds with the light show on the remix. While I felt like the first night was the chance for D to play all the songs that we expected (High School Art Class, Total Fascination, Finally Moving, Hot Like Sauce), the band played fresh versions of each track and kept the songs that we’ve heard a bunch of times interesting. The jam from the ‘Lost and Found’ Odesza remix was absolutely ridiculous and the fact that he closed the set with ‘Shakedown Street’ truly made night one special. 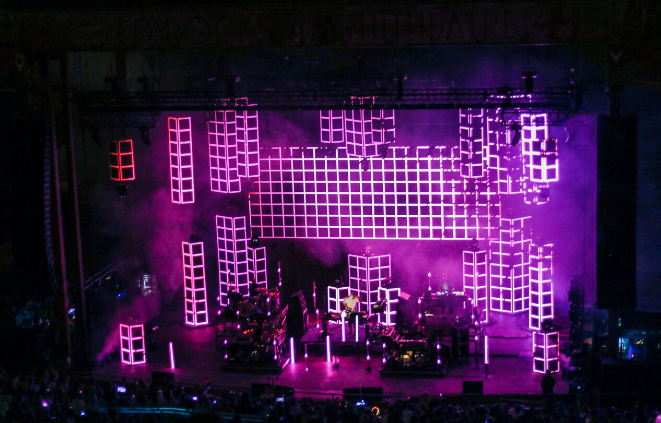 While I wasn’t able to catch most of Trophy Beats’ opening set for night two, I walked up to the venue hearing the duo play horn-heavy instrumentals with an MC laying down verses overtop. It was dope and definitely inspired me to check out their stuff after the show. The Russ Liquid Test, who followed up, was ON POINT. Playing through a few tracks from World Gone Crazy, he dropped everything from acid funk to liquid drum and bass. I’ve seen Russ a few times, but this set takes the cake, no doubt. 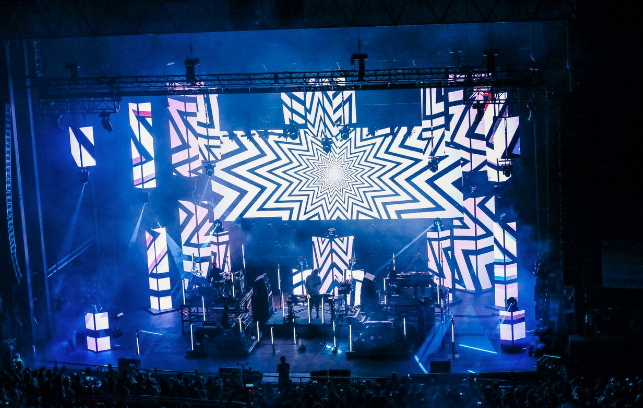 Before I start on night two, I just have to give credit to Lazershark for keeping the visuals totally fresh and completely brain-melting. The teamwork among the PL production crew is second to none. Getting us in our feels from the start of the set, Pretty Lights opened the second night on the rocks with with Dionysus. While Menert didn’t make an appearance the second night, D played a few more tracks from Taking Up Your Precious Time, including ‘The Last Passenger’, ‘Almost Familiar’, and ‘Samso’, which Karns tore up sampling Anderson Paak’s vocals on ‘Come Down’. While night two wasn’t filled with unreleased music, the team definitely dug into the vault with songs like ‘At Last I Am Free’, ‘Dark as the Sky’, and ‘Double Love’. ‘Look Both Ways’ is a song I’ve been chasing since the first time hearing it, and the band crushed it and the flip they played was one for the books. About halfway through the set, D brought his little brother Motifv to the stage. The two songs that he played with just his brother were pretty dope, but lacked a certain essence that Derek has been able to manifest into his music. I was not blown away by the track ‘Jewels’ that the band and Motifv performed with Illuminati Congo; I’m a huge fan of hip-hop, but he performed his verse with little inflection, and I felt like the entire track was just them going through the motions rather than them delivering it with heart. D and the band turned the heat up afterwards, though, with a phat version of ‘The Love You Left Behind’ that set the energy right back on track. The band’s version of ‘I Know the Truth’ was my favorite that I’ve heard live; they’re flip’s have only gotten better as time has gone on. Closing out the set with ‘The Sun Will Spread In Our Mind’ was definitely a proper way to end the amazing weekend, and while we were disappointed that there was no encore, the weekend was a memorable one and an incredible way to celebrate 10 years on the rocks. 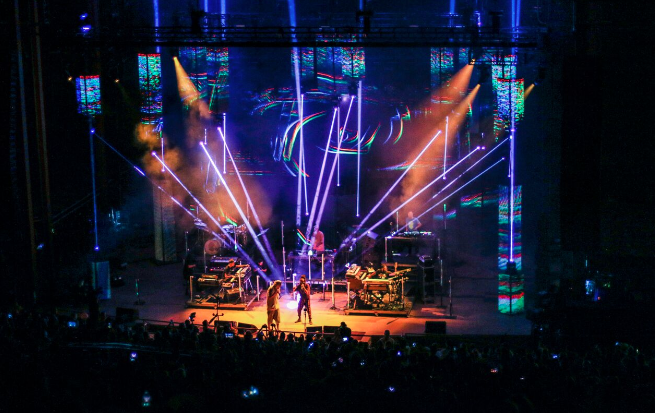 Want to relive the action? Both nights are available to stream on Youtube.