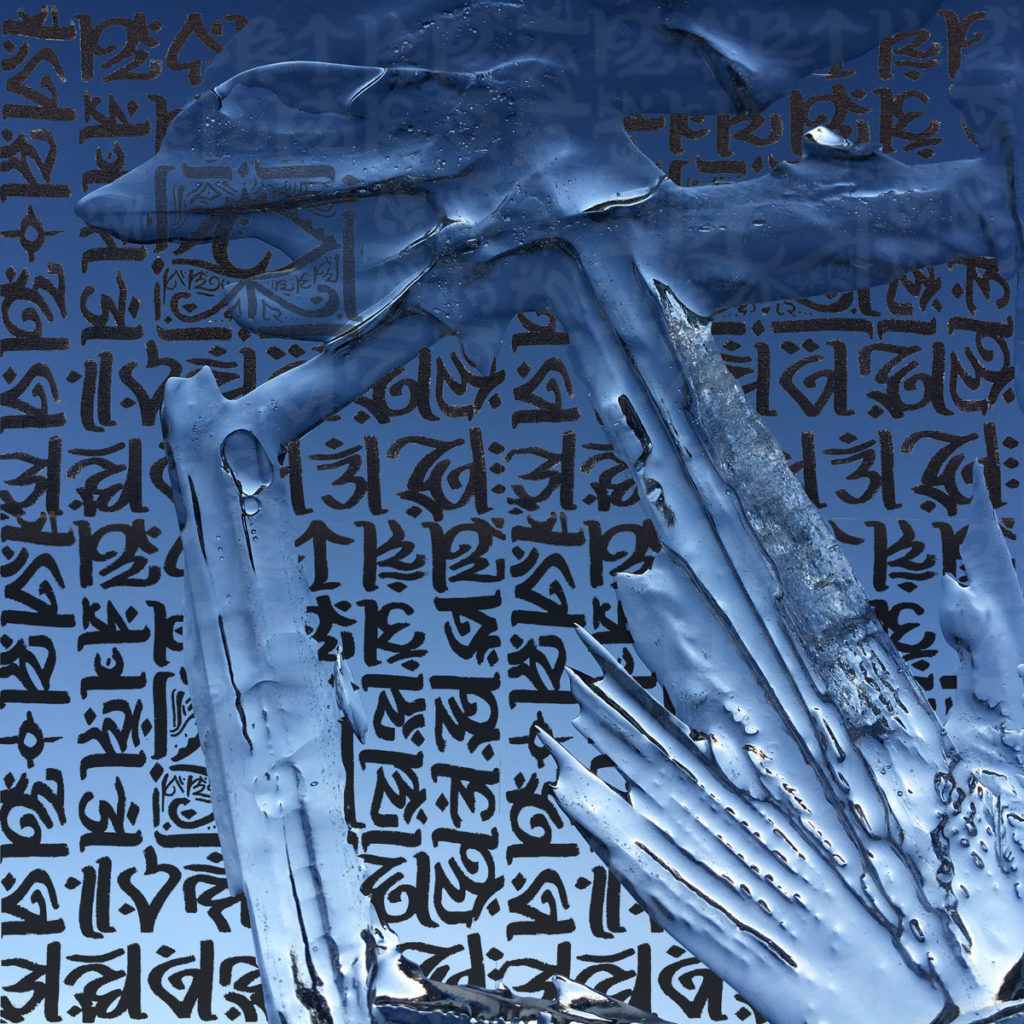 Goopsteppa graciously ends 2017 with the release of album Wonders

The music of Goopsteppa has always made me feel like I’ve traveled through the twists and turns of a narrow tunnel, only to emerge into a vastly beautiful cave. As deep bass mingles with the delicate vibrancies of otherworldly sounds, I can hear water dripping down its walls and see shadows dance mysteriously. And at the start of the new year, Wonders in its entirety has me transported into the world of etherealism.

To be ethereal is to be almost weightless – and Goopsteppa’s music has such a light quality to it, as if one could be so immaterial that they just float on air. Yet when Goopsteppa adds those deep earthy beats he is knowingly grounding down in order to maintain a perfect balance of sounds, textures and vibes.

In mixing sounds and textures, the distinct vibe of Wonders really comes through from the sampling. On the opening track “Share Knowledge”, Goopsteppa places distorted vocals from Jamaican sound clash samples in just the right places to bring more assertion and edge. From the quick laughs and tripped-out giggles on “Elixir” to the enchanting steel tongue drumming on “Wonder”, Goopsteppa knows exactly where those unique sounds need to be.

As the album progresses, Goopsteppa creates the perfect backdrop for the Cocorosie esque vocals of Scoutskey on “Just so you know (VIP)” and collaborates on chill-out future bass grooves with Storm.boi on the end track “Prophecy”. Scoutskey’s haunting vocals accented by eerie piano chords is the perfect transition into the peacefulness of “Whirlwind Chimes”. Upbeat trap allows for the consequent track “Phoenix” to take flight and a simple, tinkling melody becomes undeniably danceable.

The soft ringing melodies continue into “Welcome Back We Love You”, where vocals as fluid as water ebb and flow amongst the calming beats. And whilst “Prophecy” also has a meditative quality to it, the sounds that Goopsteppa and Storm.boi utilize are spacier and more experimental. And as this last track comes to a close, we are left in a gracious suspense, wondering what the musical creations of 2018 will bring.

Catch Goopsteppa on Jan 6 at the House of Blues (New Orleans, Louisiana) alongside Charlesthefirst, Jan 18 at The Roxy Theatre (West Hollywood, California) or Jan 19 at The Independent (San Francisco, California) with Dimond Saints.

Expectations for the New Year and Musical Exploration:

An Interview with Goopsteppa by Tai Carpenter

You were born and raised in Montreal, which is a super beautiful place. Was your childhood filled with art and music, and do you feel Montreal inspires your productions in any way?

Growing up in Montreal definitely helped shape my artistic life. As a kid I spent a lot of time out in nature with my family, and the contrast between city and forest was always a thing I noticed. I was greatly inspired by nature, but also developed a love for graffiti, street art and hip-hop culture, spending much time in my teenage years walking around tracks and abandoned warehouses. Through art, people were able to make the concrete come to life again, reminding me of the way the forest covers itself in flowers, leaves and creatures. Every day I’d be sketching in my notebooks in school, listening to lots of different music. I love the cultural diversity of Montreal also, and all the flavours it has to offer. On a trip to the city last summer, I clearly felt how it had been the place where initial sparks lit my artistic fire.

Who were your first musical influences and inspirations to begin music?

When people ask about how I got into music, I have a simple answer: I just love listening to music. Making music and putting it out there is like having a conversation with the world, and in a proper conversation, one listens as much as one speaks. I had so many different musical phases growing up, years where I listened to rock (Led Zeppelin was a favorite for years), punk, ska, hip-hop, RnB, rap, reggae and more… I was always open to explore new ideas and genres. Hip-hop was a major influence in my teenage years, during which I became aware that artistic expression was very important to me. My first electronic music experience though, was actually at a psy-trance rave in this Montreal warehouse! I later on got into deeper, dark minimal techno and house also, appreciating the space and accents trippy obscure sounds. These were the first genres I actually DJ’d when I discovered the turntables, CDJs and mixer in college, where I eventually skipped almost all my classes to spin tracks for hours a day at the student radio, exploring a plethora of styles.

That year (2007), I discovered the earlier phases of dubstep (DEEP MEDI vol.1, Skream, Benga’s “Diary of an African warrior”, Kromestar…just to name a few). Dubstep at that time to me was the perfect fusion of what I liked in techno and electronic sounds, combined with smooth bass driven broken beats, and things I loved from hip-hop, reggae and dub. That was a big turning point, where I really started enjoying the direction electronic music was taking me. I was also really into downtempo and ambient music, spending hours walking around, dreamy, with sounds in my headphones such as Boards of Canada, Burial, Abakus, Tipper, Lusine, Adham Shaikh, Kaya Project, Maps and Diagrams…. piles of other obscure stuff).

For years afterwards, I was into DJ’ing, and focused on deeper / chilled dubstep, downtempo and the earlier flavours of glitch-hop. The more I explored though, the more I felt I couldn’t find exactly what I was looking for, and one day realized, I wanna make music. Around winter solstice 2012, I had an experience during which the structure of music was broken down in my head, I deeply understood the individual elements and how they all fit into the whole, and finally had a glimpse of what I was about to create!

If you could do a back to back live performance with anyone, who would it be?

I’d say Leland Riiivr just cause I know we can do it proper. I don’t think its cause i love someone else’s music that it means we could do well behind the decks together :P

Tell us your favorite artist people may not have heard, and what song  you would recommend to convince someone to listen?

The deeper sides of dubstep are hella important to me, so I’d say check out artists bringing in the new waves in that scene: Congi, Jafu, Mercy, Jack Sparrow, Pushloop is a dope USA based one…and so many more I’d like to speak about as there’s so much talent out there.

I also really appreciate the sounds of Submerse (Project Mooncircle), and this month been loving the new album by Myst (Fent Plates). One of my plans for this year is actually to put together some Spotify playlists so I can expose my audience to other artists I think are dope (and often underexposed in my opinion). 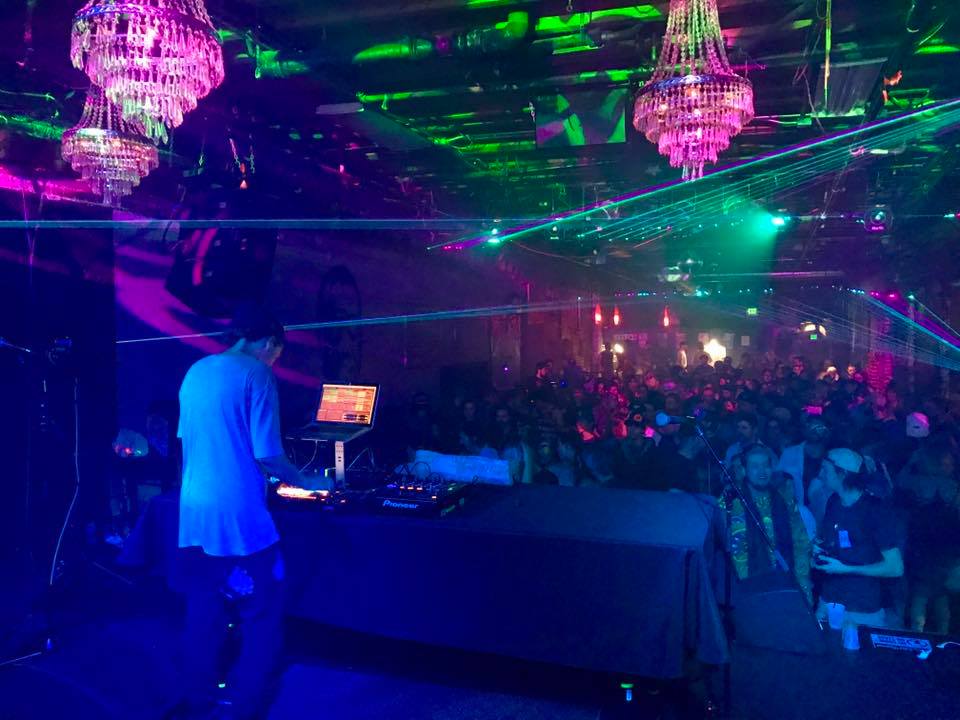 Goopsteppa performing at Cervantes’ Other Side for Re:Search Wednesdays. Photo by Tai Carpenter

You incorporate a lot of live performers during your sets, which is really mesmerizing for the audience. Why do you believe performance art is a necessary part of the live experience?

I haven’t really intentionally made it a point to incorporate performers, it just happens that way!
When people ask me if they can perform, I’m pretty much always down, because I believe in all of us being creative and expressive with each other. When someone asks to dance, spin props or perform its because they enjoy the music, and they are STOKED when I say that I’m okay with it… I like making people feel happy :)

How is Canada’s music scene? Are there any comparisons or  differences you can make about the two (US/Canada)? The festivals I’ve attended there have had super friendly vibes, but I’ve yet to explore the country apart of that which I know makes a great difference.

Canada is a huge country, but with a smaller population than that of California’s, so overall as a country the scene is smaller in numbers, but still awesome. I love the Western Canada festival scene, its definitely been a huge influence on my life and it [the scene] still supports me a lot, Canada’s got a good vibe at those events, and going is kinda the way to really understand it.

You played here in Denver not too long ago for a Purple Couch event, which is thrown by Jason Burruss. How was that experience?

I had a great time playing at that show, even though flight complications almost had me missing my set! Jason Burruss was the first person to ever book me at a show in Denver. I really appreciate how they integrate music and arts in their shows that feature visual, performance, jewelry and glass artists, and also really appreciate their crew as friends!

What was your highlight from the past year?

The moment I surrendered to music and art as leading forces in my life, and decided to stop stressing out thinking about plan B’s.