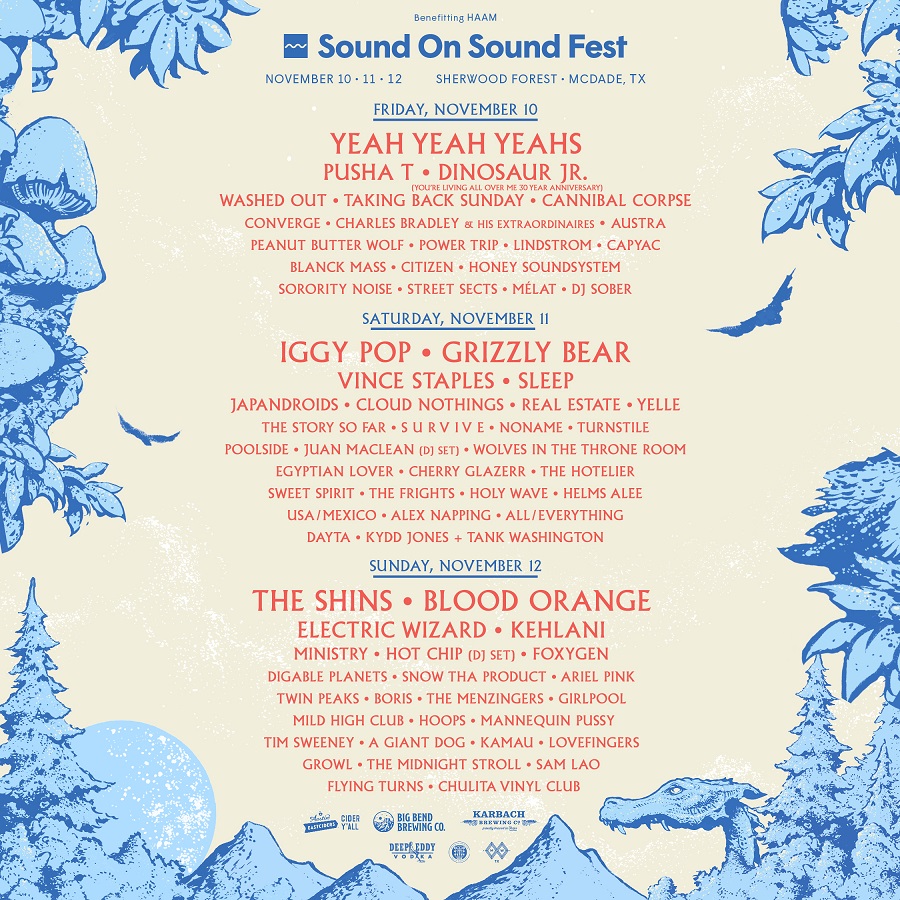 After taking in such a monstrous lineup, you’d be surprised to learn that 2017 will mark only the second year of Sound on Sound Fest. Who says newcomers can’t knock the big boys from the top? Their inaugural year was executed effortlessly, even when the fest was met with mother nature’s rainy wrath. Walker Margin, the A team behind beloved Fun Fun Fun Fest and other large scale events, have returned to the festival game locked and loaded with SoS.

Sound on Sound will again be returning to the Sherwood Forest, an all year round Renaissance Village that will incorporate era appropriate activities as well. Another highlight of the eclectic lineup is the appearance of Yeah Yeah Yeahs, who haven’t performed since their hiatus back in 2013. We were able to pick the brain of Graham Williams, founder and booker of Sound on Sound to find out the lowdown on this year’s installment.

CYM: It’s rare when a lineup can tug so many heartstrings at once: 16 year old me is dying to see Yeah Yeah Yeahs, my inner Metalhead is stoked for Electric Wizard – and so on and so forth. How the hell did you all get together to create this crazy lineup?

We always focus on trying to have an even mix of punk/metal, indie rock, hip hop, DJs, etc.  everything progressive, cool, interesting…all under one roof or all in one forest, I should say.  I’ve always believed that the festival should reflect the music we book year round and the music we believe in.  I booked Emo’s for a decade and then Fun Fun Fun Fest for another decade… and all this time we’ve been booking shows year round, all over Texas in multiple cities as Margin Walker Presents (formerly Transmission Events) and we definitely have a certain scene we appeal to and book for.  This is a larger version of that and reflects music from the scene — that and trying to make sure our line up doesn’t look too much like the other fests out there. People like the lineups from other fests and that’s great, but we’re booking an event that appeals to folks that feel left out by those events. We are a festival that gives you what is missing. We are for the serious music fan and record collector as well as for those that really want to discover new sounds.

CYM: Who or what did you have to sacrifice to get Yeah Yeah Yeahs on the bill?
Getting Yeah Yeah Yeahs took persistence (and a decent guarantee, I’d imagine).  I’ve been trying year after year to book YYYs ever since i started FFF Fest over 10 years ago. I booked them once at Emo’s with The Locust on their first tour through (outside of SXSW) and that still remains one of the best live shows I’ve ever seen.  They’re a perfect band for us and for our fans because they are a great mix of punk, dance, indie rock, garage, energy and talent. 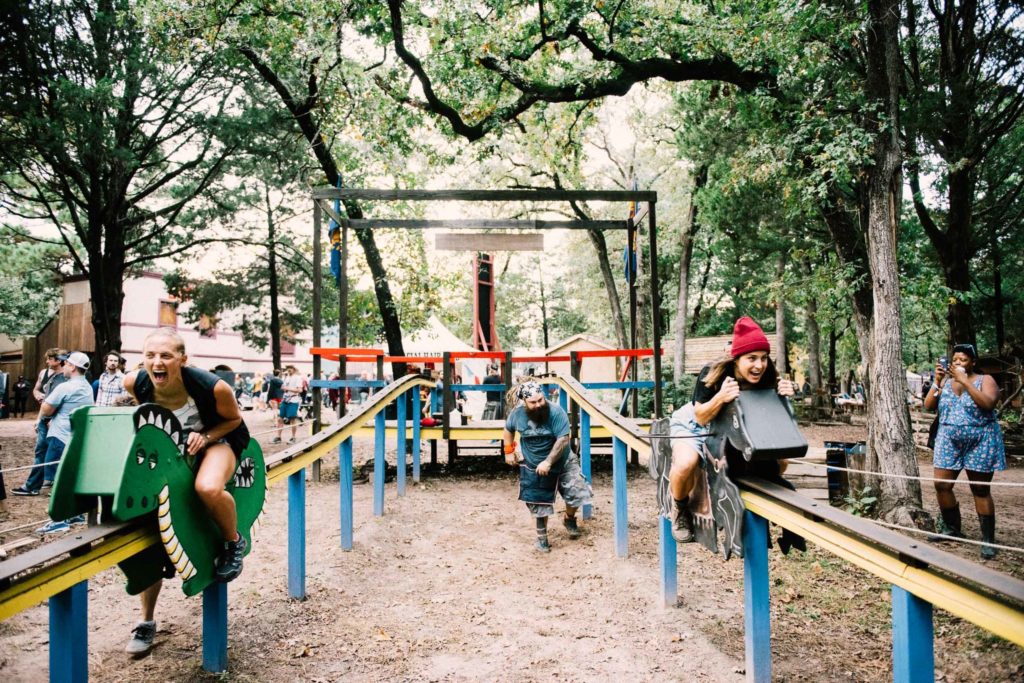 The fest environment is extremely important. We’ve always set out to not be a typical fest. The talent has a lot to do with it, but we have to follow through on the execution and make sure the experience matches the craziness of the line up.  When we started Sound On Sound, we felt that re-branding Fun Fun Fun Fest was going to be a hurdle in some ways, but also gave us a rare opportunity to do something special and fresh. Our booking wasn’t going to change too much, as we book what we know and what we like… but we figured the setting could.  Anyone can and everyone does do a fest in a park with stages and bands.  We knew that we needed to step it up a notch and when we found a Renaissance Faire, we had to do it. A castle, jousting, axe throwing, mead halls… this was too wild not to do it. Plus, the DnD nerd in us was finally at home.

We are a festival that gives you what is missing. We are for the serious music fan and record collector as well as for those that really want to discover new sounds.

CYM: In your opinion, what about Austin makes it a perfect fit for Sound on Sound?
Austin is just such a unique city. People complain about how much it’s grown and changed, but in the end, they’re all moving here because it’s great.  It’s different than other places because there’s the music, the film, the food, but, in general, the counter-culture culture… the supporting the underdog and strive to be something that doesn’t feel over-done is why Austin is great and a quirky fest is appealing to folks around here. 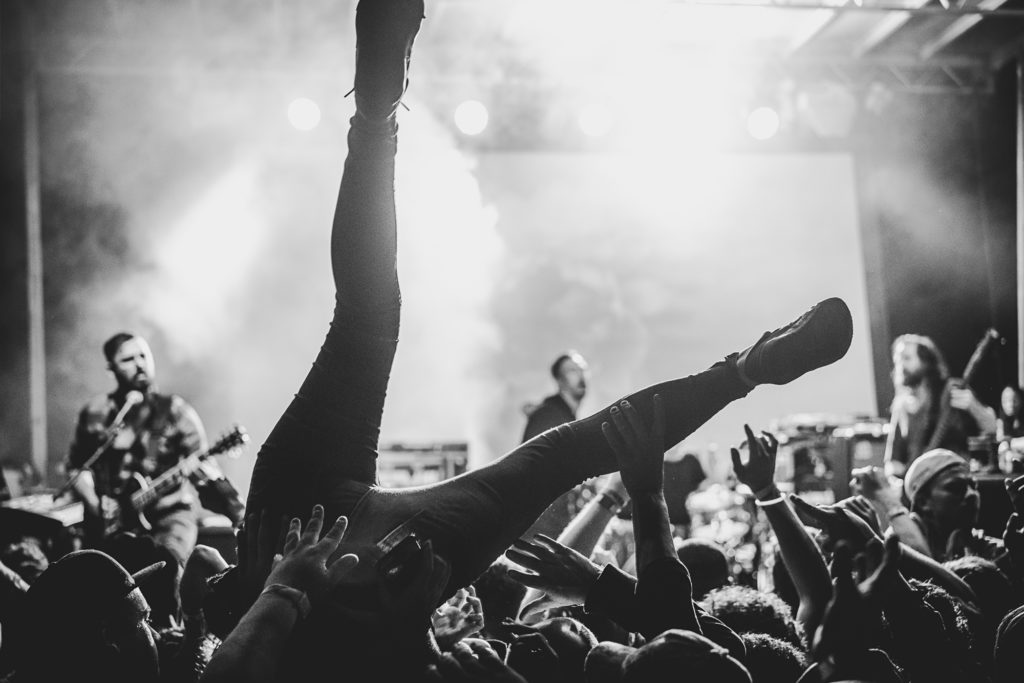 CYM: Who would your dream festival headliners be, alive or dead?
Dream headliners is a tough question.  Alive there are a ton… YYYs were on the list before, as I mentioned.  Fugazi, for sure (though don’t see them doing a fest).  Tribe was always up there… as was Jawbreaker and both are playing again.  With the castle and Ren Faire, I think Spinal Tap would be hilarious.  Not to mention, I just saw Frank Ocean at FYF Fest recently and I can say I’ve never seen anything like it before.

CYM: What sort of medieval offerings and art installations are in the works for SoS this year?
We have a few surprises that I don’t want to unveil just yet, but we plan to have legit jousting this year, for sure, and we’re planning to have a lot more activities that I think fest goers will be stoked on.

CYM: If someone were looking to get familiar with smaller artists from the lineup, who would you suggest?
Our site has links and info on all the bands so that’s worth checking out, but we also have a playlist on Spotify (called SOS Fest 2017) that you can throw on shuffle and hear all the artists playing.