It may only be February but we’ve already got June planned out – we’re heading back to Dufur, Oregon for the year’s best kept festival, and this is your official invitation. A typical day at What the Festival will see you roaming over 200 lush acres that run through an Illuminated Forest, a giant disco ball and the largest swimming pool in North America. If that isn’t enough, WTF is actually home to thousands of the coolest, friendliest, and dedicated music lovers this side of the Mississippi. By the end of the weekend, you’ll be calling a whole new group of friends your wolfpack, and that’s just the What The Fest way. Oh, did we also mention the hookah lounges, Shinto A Go-Go Tea House?! Yup. It can be easy to forget all of the talent to indulge in as well, but with so many jaw dropping names, we’re sure you’ll be front and center for these sets. 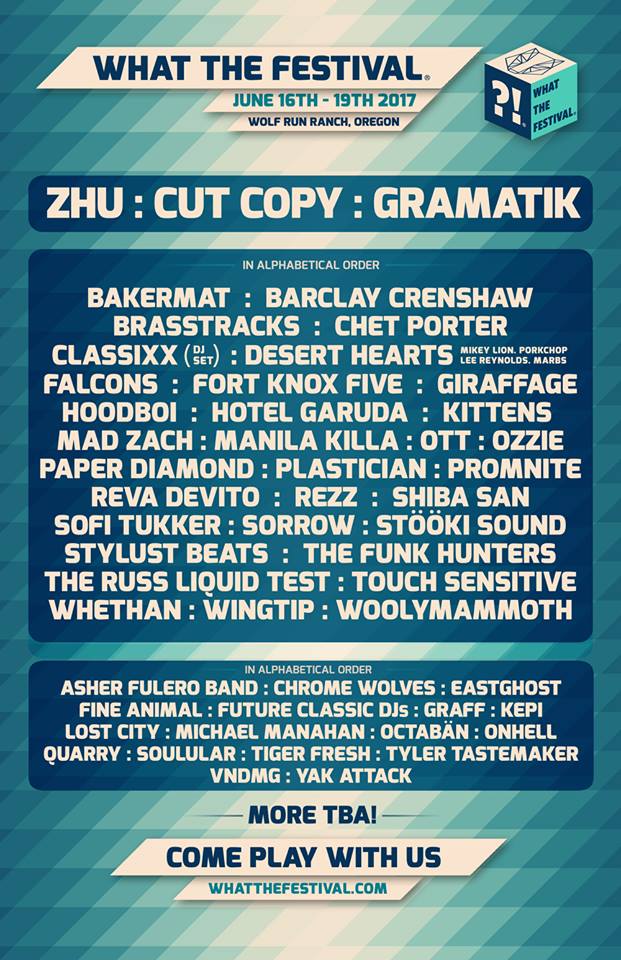 Artists Not To Be Missed

ZHU was without a doubt a top performance for me when he rolled through Denver on his Neon City tour last year, and I’d be crazy to miss another one. Beyond delivering his signature House soundscapes, ZHU has a penchant for stellar visual production, so attendees will not be disappointed.

Russ Liquid, or as I like to call him – the man with a plan, has been pushing out relentless beats for years, and most recently he’s focused his sights on his live band, The Russ Liquid Test. It’s almost hard to describe RLT’s sound because it’s so varied, but just know it isn’t something to be missed. Whether you’re into jazz, experimental glitch or a Drum n Bass loving freak, Russ Liquid will give you what you need.

I’ve had Stylust Beats’ “Heat Rocks” on repeat since 2015, and I don’t see that changing anytime soon. When you’re in the mood for an ass shaking, bass fueled dance sesh, Stylust Beats is second to none. He’s been a longtime member of the Shambhala family, and now he’s Wolfpack fam too. Stoked for your set Geoff!

All of this (and much, much more) can be yours. Grab your passes today and come play with us!