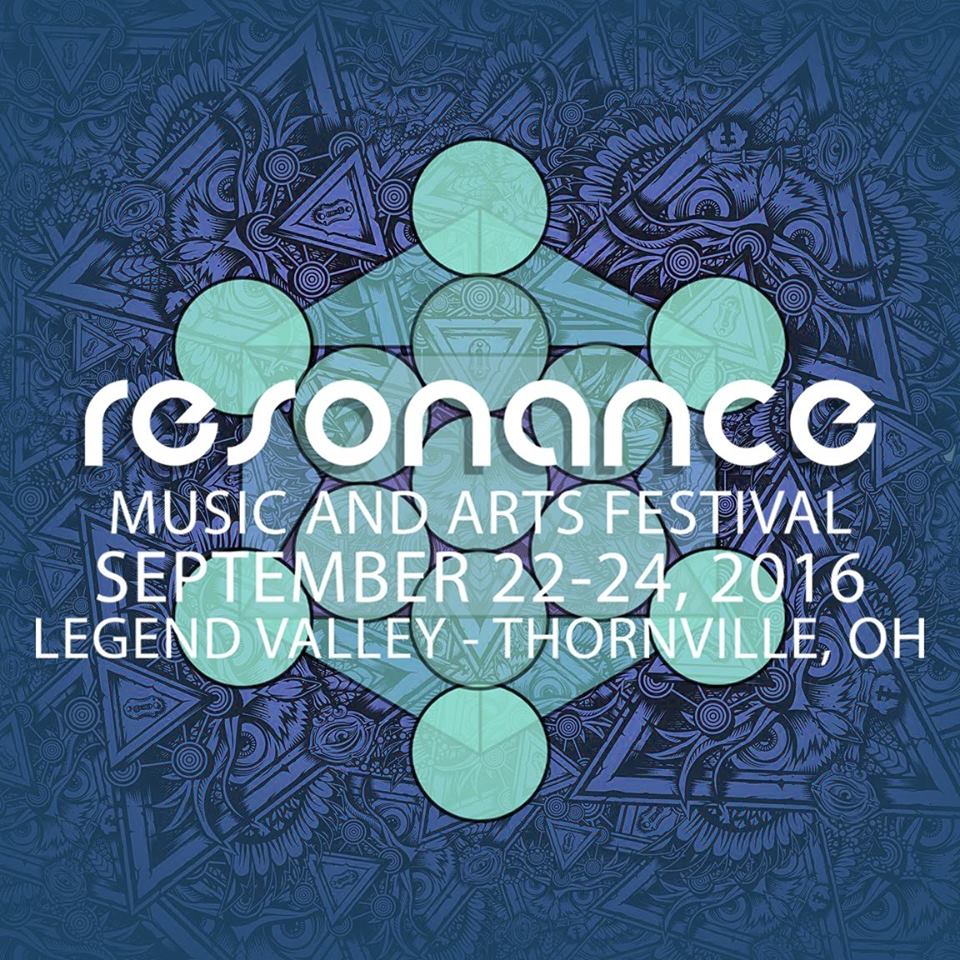 The sky couldn’t have been any bluer as the sun began to rise on the rolling hills of central Ohio last weekend. Cars and campers filled the parking lot as friends and peers readied themselves to embark on one of last Midwest festivals of the year. A weekend filled with music, art, fun and spiritual reverberation.

This year marked the festival’s third year, second at Legend Valley, and the excitement was evident as past patrons mentioned the attendance seemed to triple. Herds of people trumped their way down through the festival gate into the grounds hauling tents, coolers and gear looking for the perfect spot to set up. Walking past tarot card readers and dodging hula hoopers toward the upper part of the venue bowl, almost anywhere could be deemed a solid camp spot as the small venue allowed easy access to the surrounding four stages.

The grounds really began to take shape as the sun began to drop on Thursday. With most campers situated, the main stage area at the bottom of the bowl began to crowd as Papadosio took the stage for their first of three sets of the weekend. The band had announced previously online that this set would be a ‘P.A. set’ meaning that the entire performance would be an improvisational jam. Papadosio’s soaring journey through an improvisational landscape helped set the tone for the last main stage headliner of the night. Dark Star Orchestra ripped through a two-hour long stream of Grateful Dead tunes including ‘St. Stephen’ and a ‘Cumberland Blues’ singalong.

After the main stages shut down for the night, the back woods lit up. Behind the trees at the top of the bowl there were two smaller tent stages that housed shows until sunrise. Thursday’s after parties included a Pink Floyd inspired Dopapod set followed by a late night funk party courtesy of Pigeons Playing Ping Pong and a rocking set from Tauk before Vibe Street kept the party vibing till dawn.

The unseasonably warm weather continued on Friday as temperatures reached near 90’s by mid-afternoon. However, the air wasn’t the only thing heating up as Israeli based, Disco Biscuits inspired group G-Nome Project started the day of music off on the main stage with a heater of a set followed by energetic displays from Tauk and Andy Frasco before handing the stage over to Wookiefoot.

This was Wookiefoot’s first time playing the festival and they seemed to fit in perfectly. Slated for two performances on the weekend, Wookiefoot took the stage and played out their mindful brand of acoustic-laden hippie rock that had the whole audience dancing and singing behind a beautiful rose-colored sunset. As the band strummed the chords on their final song, the anticipation for what the rest of the night had to offer was building. 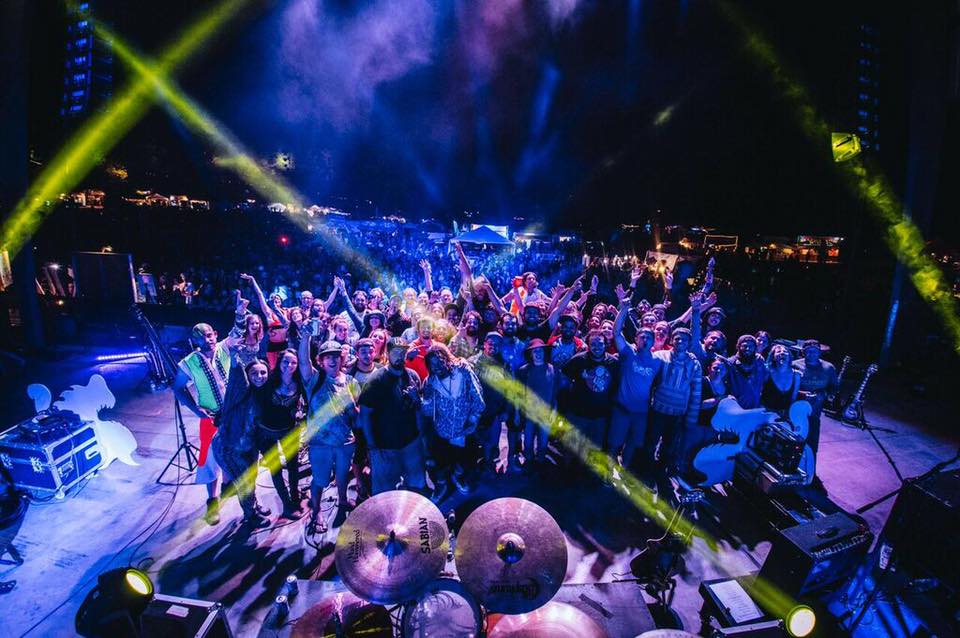 Just after nightfall, Papadosio took the stage for their second set of the weekend in front of an enormous visual screen. Starting the set with Observations album opener ‘The Lack of Everything’, Papdosio quickly turned up the tempo and transformed studio songs into epic livetronic journeys with a remarkable version of ‘Ritual’ before reaching near the end of the set with an extended ‘Night Colors’ jam. Geometric designs flashed behind the band as they closed their second set of the weekend with ‘Stick Figure’. The screen was left up for the final main stage headliner of the night. Tycho brought his live band with him and sent the entire festival on a sonic journey of serene soundscapes and back beats. As lights went down on Tycho’s brand of danceable downtempo, attention was directed toward the back tents and late nights.

While there are gravel paths that lead you around the entire exterior of the grounds, following the path through the middle led into the artist village. This epicenter of the festival was a throbbing collection of art, games and interactive visual displays. A place to get lost gazing in amazing art galleries provided by the Symbiosis Gallery, or play a gigantic game of Jenga, or even stay the rest of the night as unlisted DJ’s threw down in the Home Dome.

Moving past the artist village Friday night the festival was feverishly stirring as people kept bouncing between another late night funk session from Pigeons Playing Ping Pong and a bluesy Beatles Tribute from The Heavy Pets. Eventually, most everyone found their way to the Tent Stage for a highly anticipated collaboration between experimental dubstep duo EOTO and the multi-talented Keller Williams.

The trio absolutely nailed their late night spot with the heaviest set of the weekend. Feeling mostly like a classic EOTO set with the exception of Keller chiming in with harmonics and a drum pad that made for a fun display of talent to both watch and listen. This was also an opportunity for the production team to show off as lasers were set to full blast while the band lit up the night.

Whomever was left standing after the raunchy set from EOTO/Keller made their way to the mellow sounds of Kaleidoscope Jukebox. Displaying his musical expertise, Jukebox mixed a carefully selected a collection of soul infused 45 vinyl records that nicely wrapped up a stacked second day.

By the third day the clouds finally found their way to the valley allowing a break from the heat. As campers began emerging from their tents Saturday, the music was already in full swing. Just before sunset, Pigeons Playing Ping Pong took the main stage for the first time all weekend and rang out upon the festival as an attendee led parade charged through the crowd dancing and smiling along the way. Following Pigeons final set of the weekend, Consider the Source began their outlandish tribute to Radiohead.

By twilight hour on the third day, Wookiefoot took the stage for their second performance of the weekend. Armed with a slew of blacklights and neon face paint, the band took a darker, more danceable approach to their set leaving the crowd in a state of awe and wonder. This state of fascination carried through the rest of the evening as organic-dub producer Kalya Scintilla took the stage next with a blanket of deep of seductive dance music. Shpongle was originally supposed to play this time slot, but due to a flight complication, Resonance pulled a last minute switch and booked the Australian producer.

At long last, it was time for Papadosio’s final set of the weekend. Slated slightly later than previous sets, it was clear the band came to impress opening the set with the fan favorite 2AM before breaking into an array of explosive grooves. Highlights included an impressive rendition of “We Are Water” dedicated to the Dakota Pipeline controversy and the “Hippie Babysitter” sandwich that went from the second song of the set to the encore.

Following the intense final main stage act, attendees headed toward the woods for a serene and danceable slot from Emancipator and a set-long rap-along by Yo Mama’s Big Fat Booty Band covering 90’s Hip Hop classics by everyone from Wu-Tang to Dr. Dre. One of the biggest highlights from the weekend came late night Saturday as Earthcry (Anthony Thogmartin of Papadosio’s solo project) had help from Papadosio drummer, Mike Healy, for a break-beat extravaganza that could have been considered an Earthcry P.A. set. An improvisational display of production talent and amazing drum work that closed down the festival on a high note.

A truly transformational experience as the air was filled with feel-good vibes, the ears were filled with top notch musical talent and the eyes filled with artistic masterpieces. Every crevice of this festival oozed with a conscious and community driven approach that will help Resonance Music and Arts Festival gain success in the years to come.