Sonic Bloom is notorious for showcasing some of the brightest talent in the underground community, from electronic music and beyond. In past years huge names, such as Bassnectar and Pretty Lights, have headlined the festival shortly before completely blowing up the scene. This tradition seems to have continued as two-night headliner Tipper dropped a soft announcement at the festival that he will be headlining a Red Rocks show in May 2015. We had an incredible weekend at Sonic Bloom 2014, full of bass, sacred sound and experimental music. We discovered new musical gems and rocked the fuck out to some of our favorite musicians. It was very hard to choose a list of top musical moments after a long and fun weekend, but we managed to make a list of our top 10 musical moments. From hip-hop to electronic music, under-the-radar to festival favorites, here is our list:

Zion I Crew: Most Uplifting Hip-Hop The smoothly mystifying and uplifting sounds of hip-hop duo Zion I were a breath of fresh air within the Sonic Bloom lineup, which primarily consisted of electronic music. As a fusion of several genres beyond hip-hop roots, Zion I provided an inspiring euphonic experience for every type of music fan in the crowd. The bass dome stayed completely packed for the duration of this performance as Zumbi and Amp Live kept the crowd high, engaged and ready to achieve dreams through charged flows. We’ll go ahead and draw attention to the elephant in the room in stating this: the very unfortunate shooting that happened at Red Rocks a few days prior to the festival created bad press for the hip-hop community due to the fact that it took place during a hip-hop show. Zion I’s lyrics, which consist of unity, community, inspiration, and other uplifting concepts, prove that the hip-hop community has rich depth beyond violence. This positivity is something I hope to see more of in the hip-hop community, as it is truly a powerful thing.

Michal Menert Big Band: Most Moving Performance The mysterious Michal Menert Big Band finally made its triumphant debut at Sonic Bloom last weekend; the symphony of 19 talented musicians truly brought Michal’s electro-soul produced tracks to life in a climatic musical adventure. A deeply moving and chill-evoking moment was when the full band played “Your Ghost” towards the end of the set; the track had long been our favorite one of Menert’s, and to hear it come to full fruition with an entire orchestra was an unforgettable experience. What makes Michal such an admirable artist is his ability to bare an open heart and vulnerable soul. Michal’s capacity to be so open about the loss of his father, and turn that grief into a beautiful piece of music makes him a true artist. 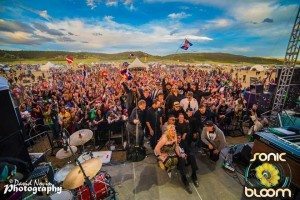 We live in an incredible time, where music can be translated from analog to completely live in one smooth transition, like that of the Michal Menert Big Band experience. It was also really fucking awesome to see Menert DJ in the bass dome a few hours after watching the full band play many of his songs. The juxtaposition of the originally electro-soul produced tracks next to the full 18-person symphony was phenomenal. Michal is a trailblazer in the industry with innovative ideas, and a beautifully vulnerable disposition. His trends are ones we would love to see followed in this industry.

The Librarian: Most Hard Hitting Set Hailing from Squamish, BC, Andrea Graham left a strong impression on us as she played the bassiest, hardest hitting set of the weekend. The Librarian graced the attendees of Sonic Bloom with not one, but two performances during the festival. Opening up the late night stage inside the VIP exclusive Bloom Saloon, the Librarian served up a healthy dose of glitchy, pounding beats that kept the dance floor in constant motion. We’re usually the last ones at a festival to make it all the way through until the late night sets, but that only proves just how massive of a set the Librarian threw down. As a co-founder of an electronic bass festival in British Columbia, which is aptly named Bass Coast, it comes as no surprise that she is so on point with her song selections and meticulous crowd perception. This set, in addition to her second performance on the Hummingbird stage the next night, was more than enough to convince us that we had found our newest musical obsession.

Templo: Favorite Breakout Artist Approaching the Hummingbird stage, the soothing beats of Liam Shea, aka Templo, hypnotically drew us in during his time slot on Saturday afternoon. Performing a set that would be quintessential for an early sunrise, his unique and melodious mix of downtempo sound created a serene atmosphere, pulling in passersby as the crowd became larger and the vibe grew thicker. Though his latest release, What I’ve Done, is only his second EP, it is an incredibly good sign of whats to come from Liam Shea. Templo is one of our favorite new finds of 2014, and we truly can’t wait to see this young and talented producer grace the stage at more festivals this year!

Krooked Drivers: Most Vibin’ Set
Krooked Drivers are a straight up dance party. Since first stumbling upon their set at Gem and Jam Festival in February, we’ve been turned on to the duo’s infectious and versatile mixes since. The best thing an artist can do is get down with their crowd, which is what made their stage presence so excellent. Bobbing their heads and singing along to every verse, the crowd reflected each motion with mad love for the Denver group. One of my favorite songs of theirs is a remix of DMX’s ‘Where the Hood At’ featuring vocal samples from Blues legend Albert King, providing an undeniably high energy, good-vibin’-all-around party anthem. Only production skills of the highest par could make these two styles resonate in perfect harmony, and by doing that, Krooked Drivers secured a place in my heart.

The Polish Ambassador: Funkiest Visuals and Most Versatile Set  The Polish Ambassador has quickly become one of the most distinguishable names on the festival circuit, because his work speaks for itself. Although many of us have seen TPA countless times, his performances are always mind-blowing, especially when cutting-edge background visuals are incorporated into the set, as they were Friday night at The Bloom Stage. Boris Karpman of Illuminated Dimensions crafted some distinctively captivating visuals that were entirely different than any projection mapping witnessed all weekend. Boris utilized elements that reflected everyday life, juxtaposed with bizarre fantasy to create a delightfully eccentric dream-like projection above and behind The Polish Ambassador while he rocked out. 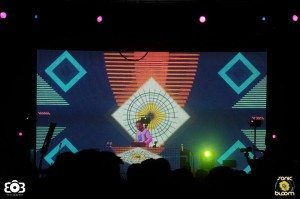 We’ve long been a fan of TPA’s electro-funk style, but hold a deep appreciation for the way he’s switched up his sound with that of latest release, Pushing Through the Pavement; his Friday night set was a splendid balance of the world’s funkiest diplomat’s evolution of sound. The set started out mellow with TPA’s new, soul-soothing tracks, then climaxed into a notorious funky, basstastic dance party. It was literally everything we could has asked for from a TPA set.

Psymbionic: Most  Synergetic Set John “Psymbionic” Burcham turned the Humming Bird Stage into the biggest Sunday evening dance party that Sonic Bloom could have imagined. Psymbionic played many eargasmic tracks from latest release Parallels, which of anticipated Pt. 2 is set to drop tomorrow. The name “Psymbionic” fits the prospering producer to a tee, because as his Sonic Bloom set exemplified, the man truly knows how to establish and nurture a symbiotic relationship with the audience through his stage presence and unparalleled unique sound. In one of the highest moments of the set, John graced the crowd’s ears with his original chill-evoking remix of Incubus’ “Stellar”, which led the crowd to simultaneously dance and travel through reflection. What can be appreciated most about John’s Sonic Bloom set was his ability to connect with his audience without any borders, through the vast depth of his sound. This set inevitably left everyone eagerly awaiting Parellels Part 2.

Fort Knox Five: Funkiest Duo In a musical career that spans over a decade, an arsenal of collaborations and countless tours around the world, Fort Knox Five are focused on consistently breaking new ground, which is apparent through every set they play. Combining the talents of Steve Raskin and Jon Horvath, this DJ group from DC has been praised by artists across the spectrum for their expertise in producing some of the finest remixes in the scene. Reveling in their musical diversity, the group effortlessly shifted through a multitude of genres during their late night Silent Frisco set on Thursday. The CO Bass Dome shook with funky grooves as Fort Knox Five rounded out their set by dropping heavy bangers of old school hip-hop classics. FK5 never fails to bring the party with style and finesse, which is why we can’t get enough of them!

Birds of Paradise: Favorite [late] Discovery Birds of Paradise were our golden discovery of the weekend. The duo, consisting of Torin Goodnight (Bird of Prey) & Tyler Gibson (GIBSON) transformed the bass dome into a psychedelic spaceship of sound on Sunday night. What’s truly distinctive about the Birds of Paradise experience is how the duo’s soundscapes effortlessly blend the traditional sound of ancient civilizations with cutting-edge electronic music innovations. Birds of Paradise’s set was both danceable and soothing; energetic yet down-tempo, leaving the crowd engaged and satisfied. 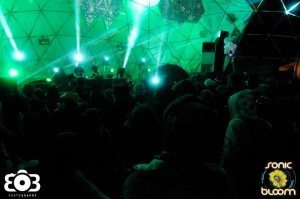 The magic sounds of Birds of Paradise overflowed from the dome and through the outskirts of the crowd, creating an unforgettable gathering of dance and healing vibrations. I’m bummed to be a little late to this party, because I’ve recently heard that Birds of Paradise will be not touring as much after this summer. I truly hope to catch more of the duo while I can this festival season.

Dirtwire: Most Eccentric & Best Surprise [Wedding] Dirtwire, the brainchild of David Satori of Beats Antique and Evan Fraser of Hamsa Lila, is the epitome of eccentric experimental music in the most delightful way. The duo utilized a plethora of instruments in their Sunday evening set at the main stage, from violin to the mouth-harp. Evan Fraser is who actually first exposed me to the mouth-harp during a live Dirtwire performance. The bizarre duo fit right into the erratic Sonic Bloom vibe with their experimental, yet sensual sound. 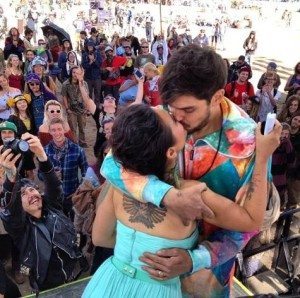 As if the Dirtwire experience wasn’t incredibly memorable enough, David Satori surprised the crowd when we came back to the stage after the set dressed in a full pope outfit. He then proceeded to invite Ill Esha and S∆UCEmonster to the stage (the duo had just played a set as Polar Vortex) and officiated their wedding. It was untraditional, beautiful, moving and truly amazing to experience the lovers get married on the main stage, one of our favorite festival weddings to date.

We are so thankful to have been able to experience new music and jam out to our favorites at Sonic Bloom 2014. Special thanks to all performers, artists, musicians, promoters and everyone else involved in Sonic Bloom this year; thanks for an incredible experience.