The Denton hip hop scene is rising and taking over the DFW metroplex with Stu Brootal and S. Good in the spotlight.  I had the pleasure of interviewing these talented local artists before their powerful performances during an event dubbed: “Stoned to Death” which was held at the infamous Andy’s Bar in Denton, Texas. Their motives and personal stories were as inspiring and raw as the music they create; which I would describe as tastefully intense and poetically artistic. 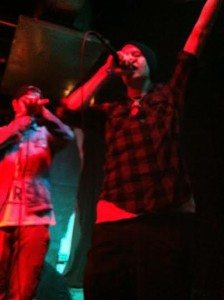 CYM:  What is the inspiration behind your stage name?

Stu:  It was just like, growing up around a bunch of punk kids; everyone had their punk name and street name.  When I was 14, I was like…  ‘I’m Stu Brootal!’   And it just stayed with me.  I wanted to change it when I got older; it never occurred to me that it would be my rap name.  I wanted it to be something like ‘Poppa Squat’ and then I was like fuck that, that’s fucking stupid.  So I stayed with Stu Brootal, people already know me by that so it just stuck with me.

CYM:  When did you start rapping?

Stu:  Ever since I could.  I was probably around 17 when I really tried to start to actually write and rap.  I was in a bunch of punk bands and metal bands, and while I was trying to form bands, I was at home making music on digital software, and I didn’t really know what to make because you can’t really make punk music on a fucking program like that.  So when I wasn’t with those bands, I started making techno music and trance music just to learn the program.  Then I started to really enjoy doing that… and after a while I wanted to put vocals on my stuff but I couldn’t sing *laughs*  I’m not a fucking trance singer… so I was like ‘ok, I’m gonna make a hip hop beat and I’m gonna rap over it.’ It came out of the need to be creative and not having the resources, I had to get it out some way and that was the only option and I just kept doing it.

CYM:  Do you feel that your musical style is like rap and rhymes or more spoken-word?

Stu:  It’s a good space in between all of that.

CYM:  Who are your musical influences?

Stu:  My influences literally came from punk bands:  very aggressive, very assertive and in your face.  Like Crass… the lyrics for every single Crass song were always so well-designed, very put-together, and always straight to the point.  And that’s what I thought was so great about it; it was poetry because it was honest.  When I was writing at first, that was my inspiration and then the more I made hip hop, the more I got into it. You can’t structure your individuality cause it’s who you are, and you just flow and express yourself.

CYM:  Where do you see yourself in the future?

Stu:  I just wanna keep making music.  Not necessarily just being a rapper though, I’d like to become even more involved like setting up events and shows and becoming an engineer at a studio.  Being a rapper is such a fun thing to do but there’s such a big world of hip hop… there’s so much to do in it and I wanna do all of it, experience all of it. I can’t see myself doing anything else but pursuing that because nothing else makes me happier. 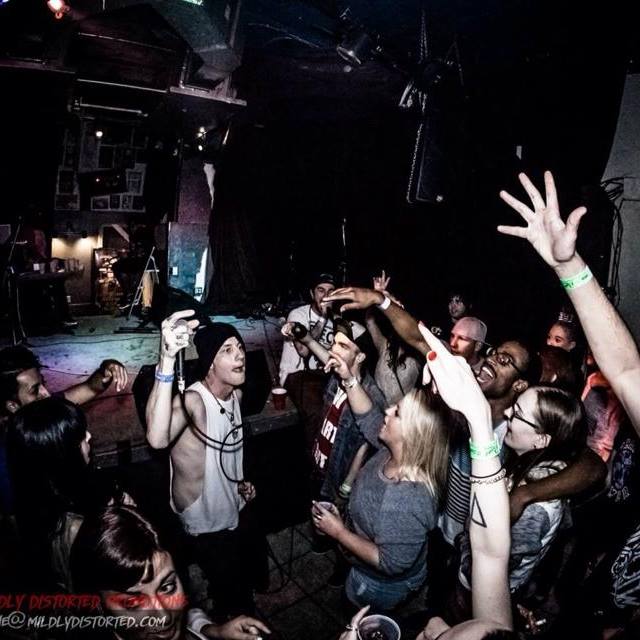 CYM:  So what’s the next step?

Stu:  The next big jump that I’m gonna make is when I get everything signed up, we can release my whole record, get the merchandise and start setting up tours. Once you’re recognized in your hometown you gotta start getting out. And I wanna go all over.

CYM:  What makes you unique or different from other hip hop artists in the music industry today?

CYM:  What kind of message are you trying to send out through your music to your listeners?

Stu:  I’ve been asked that before…  I think it changes like from song to song because every song takes me through a piece of myself. One of my main subjects, I’d say, is feeling indifferent to the world around me.  But it’s also about trying to connect to it, let it know that I love and care about it, but I fucking hate it at the same time.  It’s ok to feel indifferent, you don’t have to be bitter and angry because you’re indifferent. You don’t have to be like the world around you.

CYM:  Tell me about your favorite experience performing on stage at a show?

Stu:  The best fucking show that I ever played was like two weeks ago at Rubber Gloves. Almost at the end of my set we had everyone in the room all up to the front of the stage… I started running out of breath because I was fucking getting so excited, and the crowd was excited too.  By the end of one of the songs, I couldn’t even say the chorus anymore because I was so out of breath and I just like… hit the ground and was laying on the ground with the microphone to my face while the crowd finished the song for me.  That was fucking incredible because they got as much out of it as I was getting out of it and for that moment, we synchronized… it was fucking beautiful.

CYM:  So what did it feel like to have the audience sing back your lyrics?

Stu:  It felt like it finally came back full circle, I sent the message out and the world responded like ‘I understand…’ 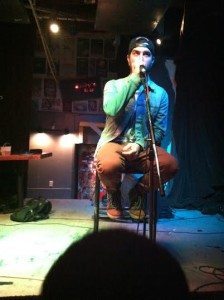 CYM:  What inspired your stage name?

S. Good:  When I was like 16… around the time I got my first car and could actually listen to CD’s and shit… I was listening to Juicy by Biggie Smalls.  And in his song, he says, “…Saul Good baby baby…” so it [stage name] used to be Saul Good.  But then whenever I got a little bit older I was like ‘it seems kind of delinquent’ so I went on as S.Good.

CYM:  So Biggie’s obviously one of your musical influences. can you name any others?

S. Good:  Yeah he’s definitely one of them. And recently… I think I would say my favorite artists of all time are tied between Aesop Rock and Nas.

CYM:  When did you start writing music?

S. Good:  I grew up with my oldest brother reading philosophy and poetry, like Edgar Allen Poe and Henry David Thoreau. But I never really wrote until 6th or 7th grade when I got in-school suspension for two weeks and I didn’t wanna do my schoolwork. And so when I came home the first day, I told my mom I wanted a [blank] composition book so I could start writing… and by the end of that two weeks, I had like 3 books completely filled with the most terrible poetry ever.  When I moved to Denton I met a couple of dudes, one with a set of technics, who made beats and stuff.  So the poetry kinda spilled over into that.

CYM:  So that’s a little different that your writing style was inspired by classic poets like Poe and Thoreau…

S. Good:  Yeah I’m infatuated with why people are the way that they are. It’s pretty much all I write about…*pauses*… I do have a song about a garbage truck though!  I’ve been learning to sort of like, start describing things; like a way to expand my writing and style… and get more creative.

CYM:  Where do you see yourself in the future musically?

S. Good:  Umm hopefully I’m a famous rapper!  But honestly, I want to inspire people because in my opinion, you can relate music to any situation… and I do that a lot too. Pretty much any situation I’m like ‘oh this reminds me of this song.’ 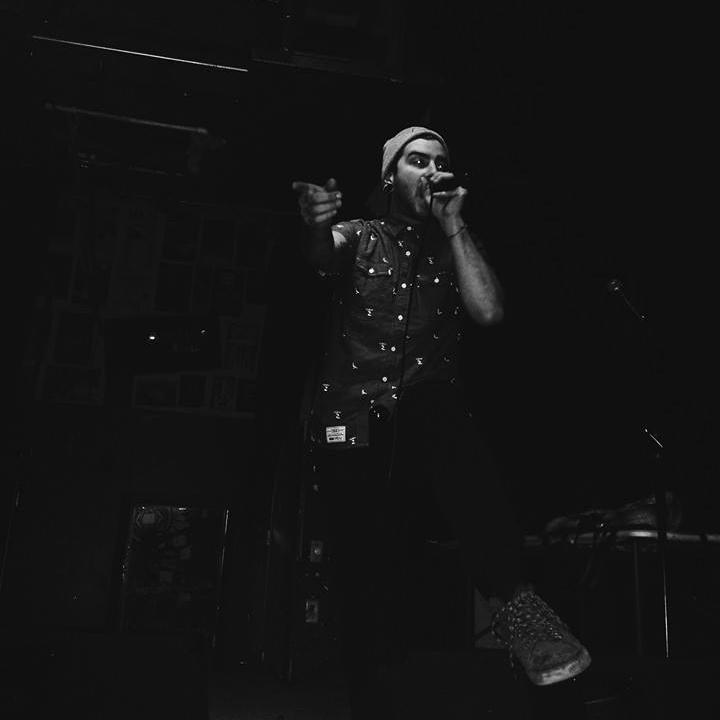 CYM:  What makes you unique or different from other hip hop artists in the music industry today?

S. Good:  When I was younger I was really snooty about hip hop… and I think that in the underground scene I’m in, you catch a lot of hate for mainstream stuff.  But now, I guess what might set me apart from a lot of underground cats is that I’m like ‘if you’re making music, more power to you.’ Honestly though, I’m just a conglomerate of anything I’ve ever heard in rap music and such.

CYM:  Tell me about either your most memorable, favorite or most embarrassing experience performing on-stage?

S. Good:  Right when I decided to go solo, after my girlfriend at the time had just cheated on me and left me for some guy… and my first performance was actually at an open mic for spoken word poetry.  And at a certain point while I was rapping [a verse in relation to the break-up], all of the lights went off… and the sound shut off… and then it came back on. That was about a week after I found out so I was going fucking crazy, like out of my mind… and that was the most memorable.

S. Good:  Yeah it was.  One of the most embarrassing though I used to be in this hip hop band, I would fall down all the time cause it was like rock and hip hop, not the stupid stuff though but I’d fall a lot.  One of my first actual shows as a solo artist was at Hailey’s I remember like trying to be really really cool like ‘what’s up y’all, I’m     S. Good, glad y’all could make it.. Imma get down here with y’all…” and I took one step off the stage and I slipped, my drink flew in the air and I fell and slid down a couple of steps, it was hilarious.

CYM:  Do you see yourself doing anything different with your music in the future?

CYM:  What kind of band?

S. Good:  I have no idea, probably something like The Hives, mixed with some metal stuff I don’t know. It’s just I’ve been doing hip hop so I haven’t done anything else in a while and I kinda wanna go back to that.

CYM:  Any advice for the new artists trying to emerge and get out there?

S. Good:  Well just know it really is nerve racking the first couple of times you get up on stage, but you will find support no matter what it is. Asking for advice is good, but the only advice I ever give is: just do it.

Also, check out Oaktopia Fest, an upcoming hip hop festival in Denton,TX featuring Stu Brootal & S Good among many others still waiting to be announced. [Tickets]