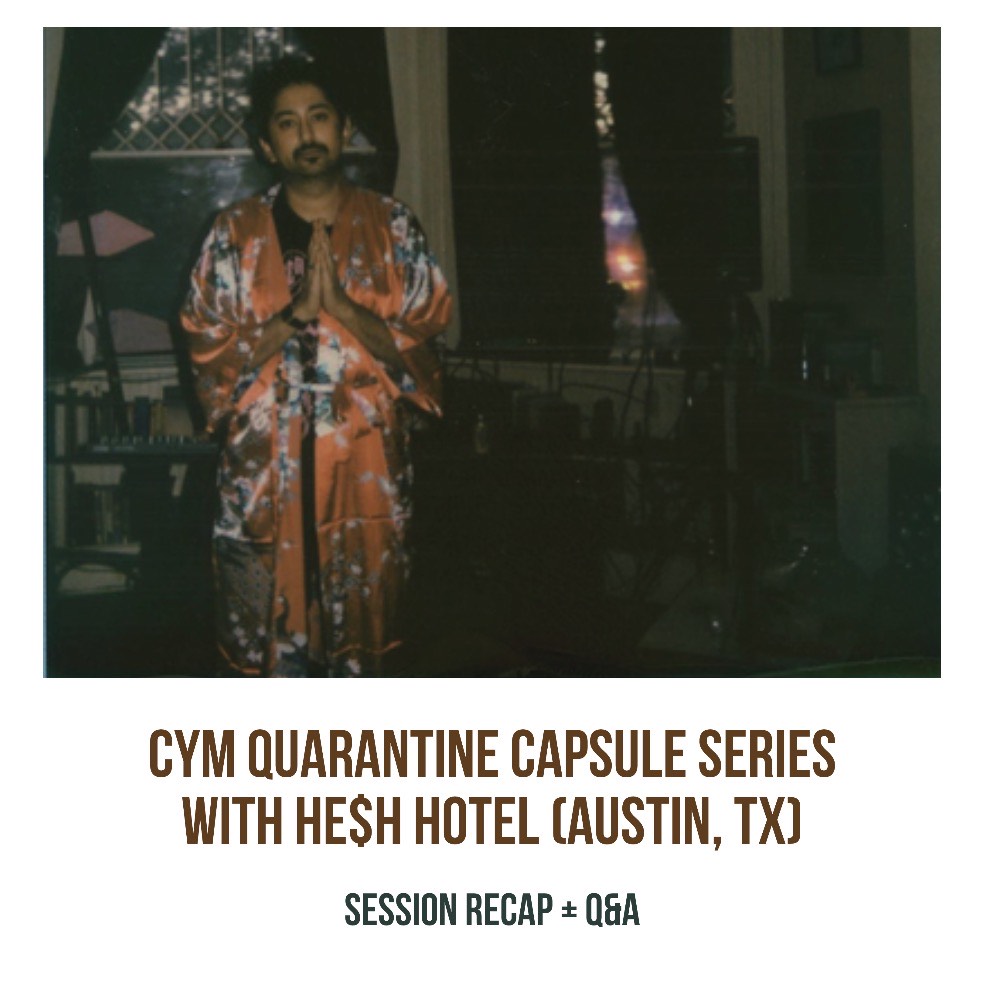 He$h Hotel is a synth-wave producer out of Austin, TX. Performing around the live musical capital of the world, his DJ sets are meeting points for the cities’ local tastemakers, with Hesh calling beloved venues like Cheer Up Charlie’s (support their GoFundMe for staff here) a home away from home. It’s probably why he dedicates time to go live on his socials, giving his friends some groovy tunes while simultaneously creating peace of mind.

While we all miss our nightlife, it’s times like these that give us gratitude as we look forward to the IRL dance parties to come. Last night we chimed in on his live stream and asked some quick questions – play some tracks and read along.

Compose Yourself Magazine: First off, thank you for giving us that live set, that was dope! Thanks for letting us hop on the stream and ask some questions.

Hesh Hotel: Yeah thanks for having me!

CYM: We wanna do more of these so figured why not start with some home town Austin love. How would you describe your music?

Hesh Hotel: That’s kind of hard for me, I’d say it’s within the synthesizer genre for sure. I’m gonna start producing more RnB though.

Very nice, I’m a fan of the future RnB/electronic sound myself. Next question – what is your favorite Simpsons musical number? I know you’re a fan of Simpsons and I am myself.

Excellent question Tai. I’m gonna go with the ‘We Do (Stonecutters)’ song. I’ve got the ring on right now actually!

Solid answer. That’s definitely one of the best.

I’ve thought about doing some weird Simpsons covers, I’ve even thought about doing like, a concept album that would have all these samples and stuff, just put it out for free or whatever, because it’s a sampled album. I wanna use a lot of the musical numbers; I just love all the stuff Mr. Burns says. He uses all these antiqueted terms – like one time he’s gonna throw Homer into the falling pit, and he’s like “Throw him in the Dungeonarium,” and that’s just a great song title you know?

What is your funniest quarantine moment so far?

Ooh… a hilarious quarantine story. I work from home in tech, and it’s funny because I take a lot of time off and people at my job know that [laughs]. And uh, I’ll just say the immediate thing that came to my mind is today,  I was supposed to be working until 5. My higher ups know I’ll leave if given the chance, so they literally messaged me at 4:00 and go ‘Do you want an hour of your life back?’ and I’m like ‘Duh, let me go.’ At work I get called a frequent flier, I believe is the term.

Who to pass the mic to next?

Oh, for sure my buddy Cameron, soft sic, we were both supposed to play a show at Swan Dive with our friend Niki FM and I think you’d like that a lot too. So yeah, I think they’d both be into doing something like this as well.

Awesome, we appreciate that recommendation and will get in touch with them to set something up! Thank you again so much for letting us hop on your stream and pick your brain.