It’s hard to believe so much time has passed since the last evening of Bloom at Hummingbird Ranch. After three weeks of reality, we’re already looking forward to next year’s event. Each night of the 2019 festival’s procurement of music had its own feel, and the festival crew pulled it off without any hiccups along the way. We’re excited to share our experience of this year’s event. 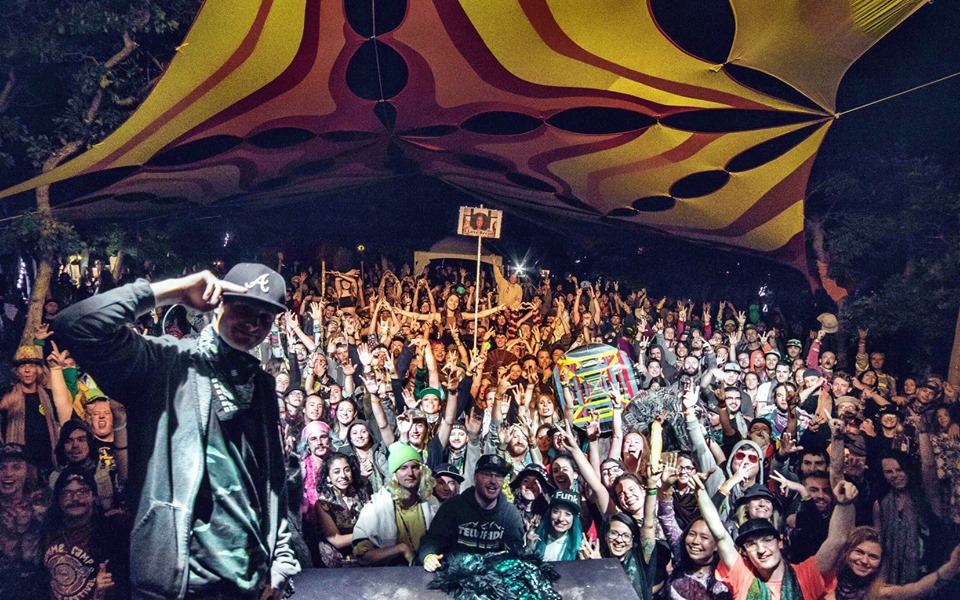 Arriving just before the welcome gates closed on Thursday, I made it in time to catch the tail end of Kayla Scintilla and Eve Olution. The drippy tribal vibe was curated by complex rhythmic structures and dense vocal tones. Building layers with the use of faint chimes, the flow of their music felt like a welcoming breeze. Moving on to Ana Sia a the Meadow Stage, the aggressive, fast paced bass was a drastic switch up from Kayla’s calmer vibes. Her uniqueness is apparent at every time I’ve seen her and assigning her live sets a genre would be too limiting. Her high bpm sound incorporates dark, contorted vocal samples that always align with the tone and rhythm of her music – super fun and original.

After exploring a little around the Meadow Stage, we made our way to the Hummingbird to catch the end of Cualli. Capturing the essence of the outdoors, Colorado’s Aaron Holsapple set mixed culture influences from around the world to produce some wonky bass music. Closing out Sunday night, Philos Records artist Daily Bread took over. Playing through a wide range of his discography, Bread put together a set of late night bangers that kept the party moving until 4am. The heaviness of Moreland Ave Blues, Clock on the Wall and Walking in the Georgia Rain were fitting for this festival’s style; a great song selection made this one of my top three favorites of the weekend. Also, the Shenron backdrop used by his visuals team was a nice touch.

Starting Saturday with more Daily Bread at Beats and Brunch; Whatley dropped a handful of gems including an edit of People Under the Stairs’ “Acid Rain Drops” edit. Snacking on an awesome brunch menu from Landshark Denver, the mellow vibes of the morning set were the perfect way to start the say, and fellow Philos Records member Derlee hopped up towards the end to spin some tunes of his own.

After taking a midday break, we made moves back into the festival just in time to catch a dope Clozee remix towards the end of Comisar’s set. Autonomix hit the Hummingbird Stage next; the four piece jam sesh that ensued was a refreshing switch up from the heavy dose of bass music we’ve had been hearing throughout the weekend. With a saxalicious sit in from Carl Cox, the synthy, prog-rock elements were combined to create a fast-paced jam party for all to enjoy. Potent Productions’ MIDIcinal hit next with a bouncy set that was at the top of my list for the weekend. Highlights from this one would have to be the dancing lobsters and dope new PL remix he dropped to close out the set. After Autonomix, I made my way to the Meadow Stage for Philos Records artist Artifakts. Another favorite of the festival, Artifakts brought a ton of new-new to the table, and dropped a “Money Trees” remix that hit hard. “Next Level Style” is another favorite of mine that he dropped as well.

Later that night, I hit Deitch at the Hummingbird which, like Autonomix, was a nice change of speed from most of the music at the festival. His hip-hop beats and live drumming made his set stand out, and his deep collection of beats let him brings cuts to the table that sounded completely new to me. Catching the start of Emancipator, they got things heated up quickly dropping one of my favorites, “Anthem” early in the set. The four piece ensemble really gives their music a special feel. Bouncing around to Megan Hamilton; her combination of bass and house kept bodies moving on the Hummingbird dancefloor. The Grid Division/ SugarBeats collab feat. Megan “Good For You” was a banger, and hearing “Forbidden” off her newest EP live for the first time was awesome. Stay tuned for an interview with Hamilton from Bloom coming soon.

Capping off the night, the Solvenian Bitcoin king Gramatik threw down my favorite set of the weekend. Playing a bunch of street bangers, the energy was sky high from start to finish. Other highlights included the new Big G collab “Better Believe It” and hearing “Vitalek Buterin” live for the first time was definitely a memorable experience. “Satoshi Nakamoto” also set things off and everything was very on point from sound design to visuals. His set did not disappoint, and I’ll be catching any of Denis’ sets I can when he comes through Colorado.

After a night of heavy sleep and a day of heavier hydration, the stage was set for another round of music. Kicking off Saturday with the hip-hop influenced beats of Nadasound, the bar was set high up from the get-go. Colby Buckler on the sticks helped give the set depth, and the funky day party that Nada through brought life into the day. Hitting the Hummingbird stage next, the 6-piece Denver collective Animated Earth gave bloomers a wide range of styles and genres crammed into an hour set. The set was a smorgasbord of styles; alternating among beautiful singing, heavy hip-hop verses, soothing string sections, powerful horns and mesmerizing synth lines, the full package was as amazing as is was accessible. The band truly has something for everybody. Next to hit the Hummingbird Stage was Colorado’s trillest trio, The Party People, who truly brought the party in every sense of the phrase. The love was reciprocated by a crowd as packed as I had seen at Hummingbird all weekend. Buckler hopping back on the kit pushed this one to the next level, and the vibes couldn’t have been higher for this Saturday evening throwdown.

A short dinner break courtesy of Super Heady Tacos had us refueled to keep pushing through the night of music. An artist I was unfamiliar before the festival, Spoonbill brought an absolute banger of a set to the Bloom stage. Canopy has been in heavy rotation since catching that set, and I highly recommend you give it a listen. Making sure to make it over for another amazing Colorado collective, Nobide supplied a fun and funky electrojam set to keep the energy alive at the Hummingbird. Making it back in time for a trancy tweener from Catparty, the synthy, hip-hop dance party had our whole crew moving. Opiuo was up next, and his live mixing and drumming was outrageous. Not only is he a gifted performer, his musical flavor is right up my alley. I had never seen him play, and was honestly pretty unfamiliar with his music going in to the set, but I was quickly converted to a fan. While I can’t ID many of his tunes, although I know I heard Ginger Lizard, the set started off bassy with plenty of live-drumming dubstep and moved towards higher bpm house-bass music towards the end of his set. Overall, definitely a top three set of the weekend.

After walking around to Mark Farina and the Yoga Dome, we found ourselves in the hammocks for a late-night Yheti set at Hummingbird. Some late night bass capped off the night until the chilly 4am air forced me back to the tent.

While I had to head out early on Sunday, Homemade Spaceship, Um…, Spectacle, and The Bloom Orchestra were favorites of friends that stuck around. With 2020 in mind already, scoop a super-duper-early-bloomer pass for next year’s BLOOM! (for peeps who went this year and last year only, for now… the email you used to get your tix is your secret code to unlock this special tier). Big thanks to Sheree and Wes from the Media Team, Jamie Janover, all the artists and festival staff that made this go off so flawlessly! We can’t wait to get back next year!