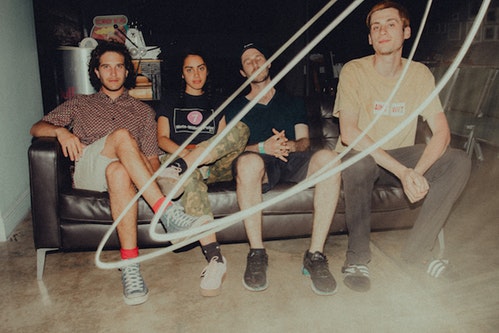 Crumb is a band that is bringing an undeniable uniqueness to indie rock. As dream pop blends with light-as-air vocals and unexpected psychedelia, Crumb creates a potent infusion that seems to fills a room with intoxicating power. As the sun dipped low in the sky, casting its last rays through ornate windows, The Moonroom in downtown Denver was the perfect place to see the band. The stage was bathed in a warm purple light, and the first two openers set the mood. Ashley Koett’ stunning vocals entranced the crowd, while multi-instrumentalists Loving lulled the crowd with their yearning sweetness and introspective nature.

Since their humble beginnings in New York, Crumb (Lila Ramani, vocals/guitar; Jesse Brotter, bass; Brian Aranow, synth/saxophone and Jonathan Gilad, drums) have released only two EPs. Since there is only so much of their unique sound, the expected intimacy of the show was something that I was craving. It’s truly special to be in a crowd where everyone knows each word; every dive and dip of the music. As I interacted with people, I met a kaleidoscope of characters that proved that Crumb’s fan base is as eclectic as their music.

The first twinklings of guitar told us that Crumb was opening their set with “Plants”, the first track off their most recent EP Locket. The crowd began to sway and joined Ramani as she sang “Tell me, tell me, something sweet” in her soft, almost demure vocals. The band continued into new tracks, where Ramani’s voice asserted a higher and strong pitch. Onstage, she sang with a more melodic, dramatic style than in recordings. But when Ramani’s voice quietly dropped out in “So Tired”, the crowd filled in the melody. The collective effervescence in the room was strong, and the band felt it. They weaved in and out of new songs while still promising the psychedelic heaviness of “Thirty-Nine”, the irresistible sonic journey of “Locket”, the latter performance being the one that made it my new favorite, replacing the euphoric “Bones”, which the band also performed.

Crumb’s set in one word would be badass. The passion and musical immersion that each musician exuded gave them such a memorable stage presence. These fervorous moments were caught throughout the night: Brotter headbanged while his fingers created otherworldly bass lines. Ramani’s hair completely obscured her face as she shredded on guitar. Gilad’s drumming filled the spaces with torrent waves of rapid snare and crashing cymbals that reminded me of a whirling ocean while Aronow’s saxophone brought out a solo from the depths of the sea, soaring out to reach into space.

Even though Crumb’s music soared out into space, it didn’t take them too long to come back to Earth and before I knew it, the show was over. Ending their set as ethereal as it started, Crumb left the crowd under a magical spell that refused to wear off right away.