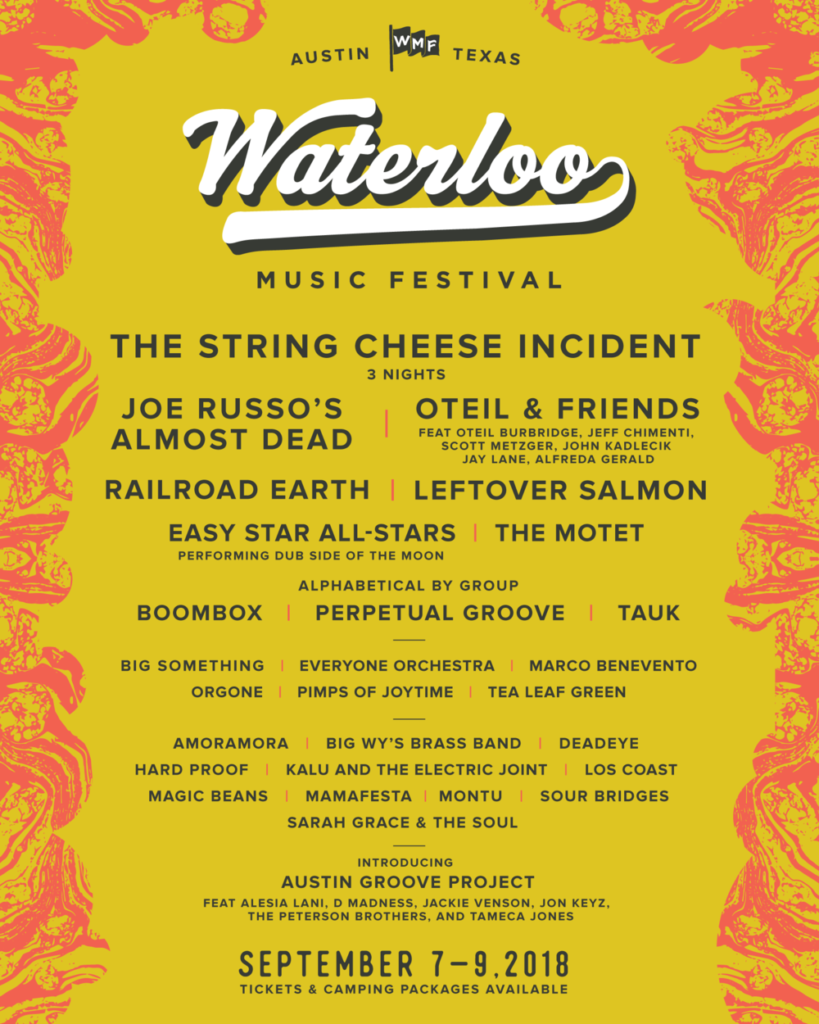 **String Cheese setlists for each night can be found at the end of the article!**
DAY 1
The sun beamed down on a line of cars sitting on a dirt road just outside of Austin, Texas. The people were arriving at Carson Creek Ranch in droves for what was shaping up to be a memorable weekend. Waterloo Music Festival, first of its name, was offering some of the best local and national musical acts around. And everybody wanted a piece of Cheese.
Mamafesta opened the weekend on the river-side Relix stage, and Big Something broke in the main stage with their own brand of funk. Within the first few hours, I had acquired a hat, lost my sunglasses and found another pair on the muddy banks of the Colorado. A friendly nearby head held my hand as I gingerly climbed down a steep, slippery slope and reached to pull the abandoned eyewear from the mud.
The sun grew hotter as the bands ping-ponged the funky vibes across the open field – Big Something to Montu, Montu to Austin Groove Project, AGP to Magic Beans – we coasted through a vibe-y afternoon.
Oteil and Friends took the main stage in the evening for the sunset slot, and the clouds rolled in earnestly after them. Clouds that would hang ominously overhead for the remainder of the weekend. The band of Dead veterans served up a soulful set of tunes punctuated by terrific renditions of “Piece of My Heart” and “The Weight.”
Firmly into the night, Perpetual Groove set the mood. Down by the river, the festival veterans delivered just the right vibe for the first String Cheese set of the weekend.
And what a first set it was! A particularly memorable jam arose toward the end of the set with “Sirens” sandwiched between “Vertigo” and “Desert Dawn.” But in retrospect, the most memorable tune was a prophetic “Black Clouds” encore. 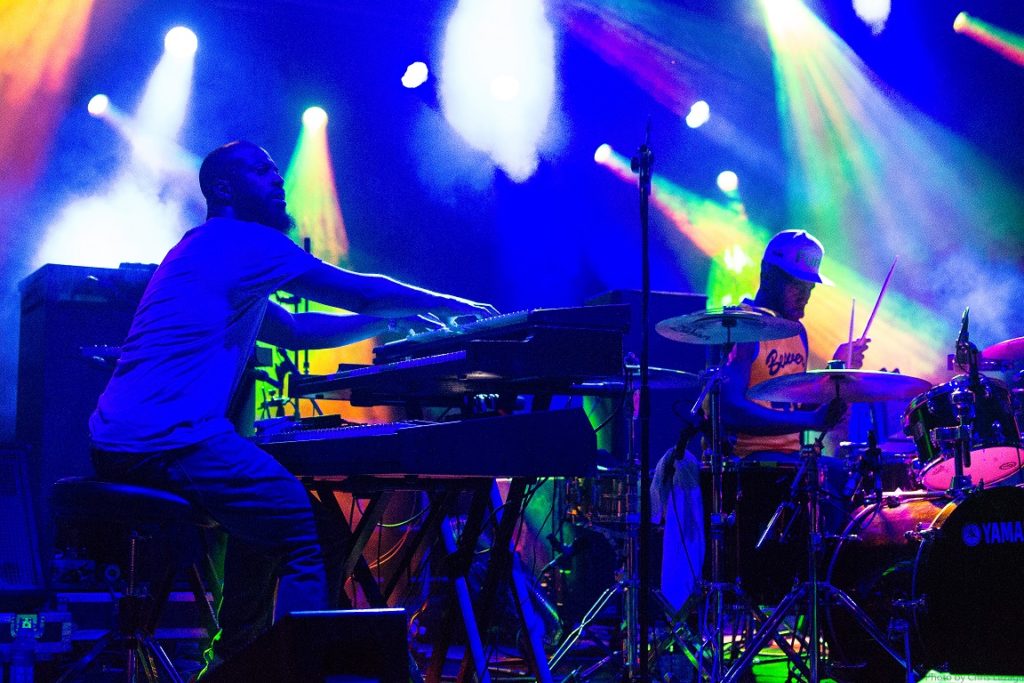 That first hit of Cheese was awesome – what could follow up a proper set like that?
One word: Tauk. “You’ll want to get there early for Tauk,” I was told. I had heard the recordings. I knew they were complex and precise, but as many know, studio recordings and live performances are two very different things. By the time Cheese had wound down, Tauk was firing on all cylinders. The musicianship in that group is stellar and seeing them live vastly outshines anything that could be concocted in a studio. Rarely will you find someone who can utterly demolish a drum kit like Isaac Teel. Truth be told, I didn’t dance as much as everyone else. It’s hard to dance with your jaw on the floor.
DAY 2
In the distance, a lightning storm brewed. Festival staff delayed start times and kept concert-goers out until it abated. The sky greyed and the clouds threatened to burst, but the rain never came. If anything, the overcast weather made it a little bit cooler than the day before – a welcome respite from the Texas heat as we bounced between the main stage and the river. 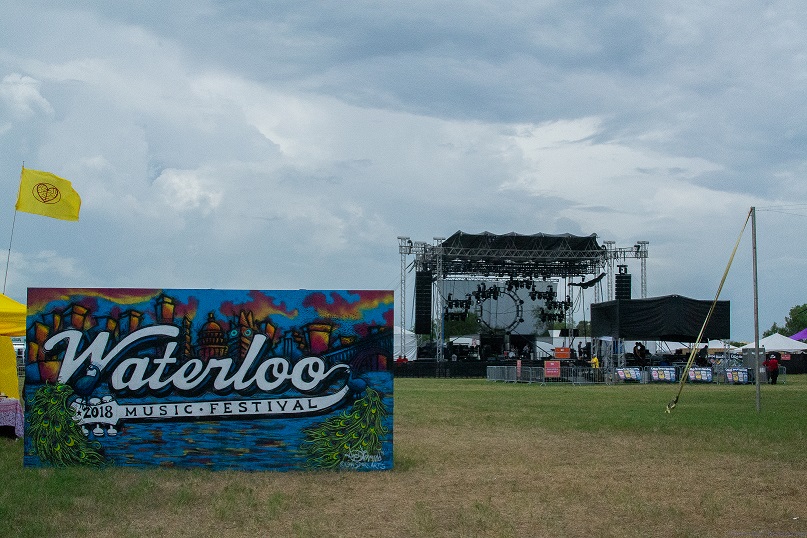 While the slew of early acts, which included the likes of festival veterans Tea Leaf Green and Marco Benevento as well as soulful newcomers Los Coast provided a top-shelf soundtrack for a Saturday afternoon, the day belonged to JRAD. Slotted in at sunset, JRAD played an incredible Dead set in the fashion only they can deliver. Taking classic tunes and turning them around is what they do – like playing “Slipknot” into “Throwing Stones,” or deconstructing “The Other One.” This was one of the sets I was most excited for, and I was pleased to say the least. What’s a festie without a little good ol’ Grateful Dead?
But if the day belonged to JRAD, the night (and Waterloo Music Festival in general) undisputedly belonged to Cheese. Night two, String Cheese laid out a truly deep set, complete with Kyle’s synth womps of madness among the jams. The “Short Skirt, Long Jacket” interlude in “Rosie” was a particularly nice touch, and they even brought out The Motet’s Lyle Divinsky on “Get to You.” It was a cool little sneak preview for the late night set to follow. 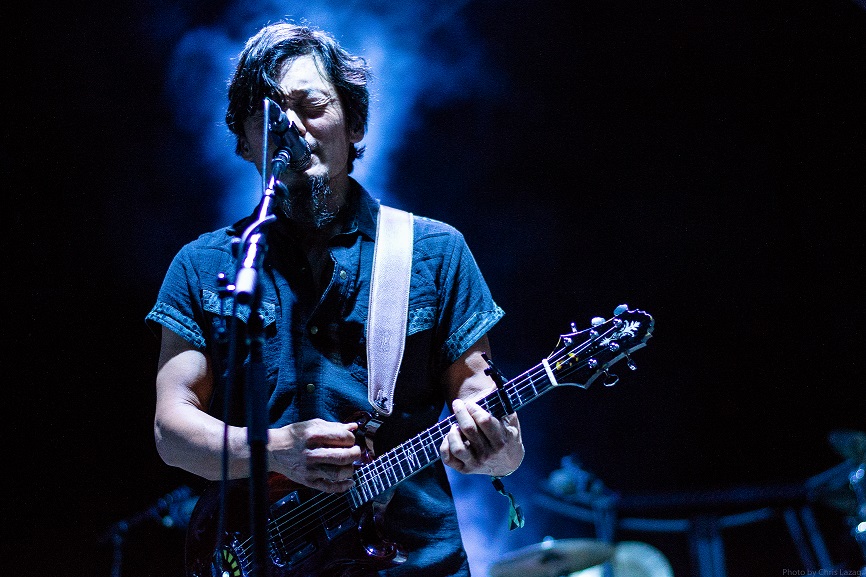 A short while later and Lyle was back onstage, this time by the river with funk kings The Motet for a late-night rager. It was the perfect ending to a full day of music. But for those who just weren’t finished yet, there was a silent disco to be found somewhere among the tents in the darkness…
DAY 3
And then the rain came. It started in the early morning hours and continued unabated into the afternoon. Some of the campsites flooded. The great tent that stood triumphantly in the center of the festival grounds sagged under the weight of the rainwater that had collected and was taken down. Luis was a festival-goer who slept uneasily in a hammock beneath a tarp cover. “It was really more of a nap,” he said. “I didn’t want it to cave in on me.” The field resembled more of a marsh when they finally let the concert goers onto the grounds. It was a delayed start, but Austin’s own Deadeye opened the main stage with a wistful “Here Comes Sunshine” beneath a dreary sky.
The sunshine never really came that day, but aside from a couple light showers, we were thankfully spared any severe weather. After a funk-filled set from Austin’s Hard Proof, the main stage brought the bluegrass out with Leftover Salmon and Railroad Earth, each delivering wonderful energy to the masses that had gathered despite the sopping wet conditions. Many sported rain boots, but others not so well prepared dropped the shoes altogether. They danced happily barefoot in the mud, braving the fire-ants in favor of avoiding the dreaded wet sock problem. 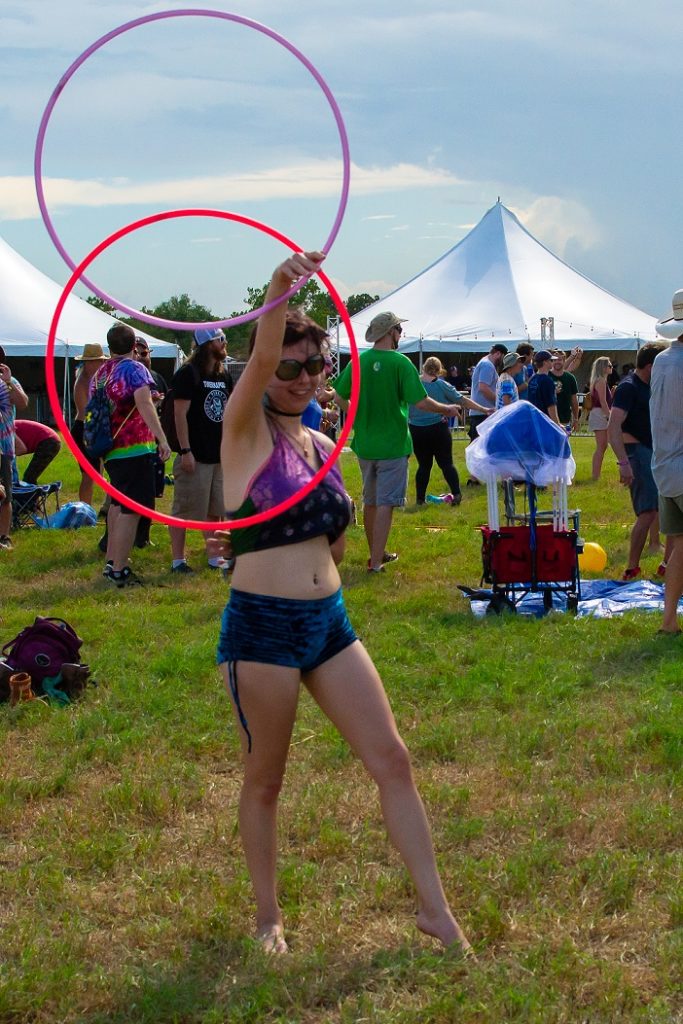 Back by the river on the Relix stage, people slipped and slid on the embankment to the sounds of Sour Bridges, Kalu and the Electric Joint and Pimps of Joytime. Each delivered wonderful vibes beneath the dour sky to enthusiastic crowds who showed up to get down. It was truly awesome to see how ugly conditions could not wash out Waterloo.
Reggae tribute masters Easy Star Allstars took the stage before dusk and they played their cherished work, Dub Side of the Moon, start to finish. It would have been even better to have experienced this set at night, with the atmosphere descended and the stage lights in full force, but the set was enthralling nonetheless. The String Cheese set was to be a short one. And early, to boot. Due to permit restrictions, the music had to end at 11 PM. So String Cheese played an abbreviated set that got rolling around 9:30.
It may have been a short set, but the sheer magnitude of it was enormous. Imagine taking a full-length String Cheese set and distilling it like moonshine. That’s what we got—String Cheese moonshine. The mud churned into a thick goop by a thousand stomping feet. The set ended gigantically. For the encore, String Cheese played the absolute most epic rendition of “Texas” in the history of the world. Period. Leap after energetic leap, the jam launched itself into orbit. It was an ecstatic musical experience that was easily the highlight of the entire weekend. 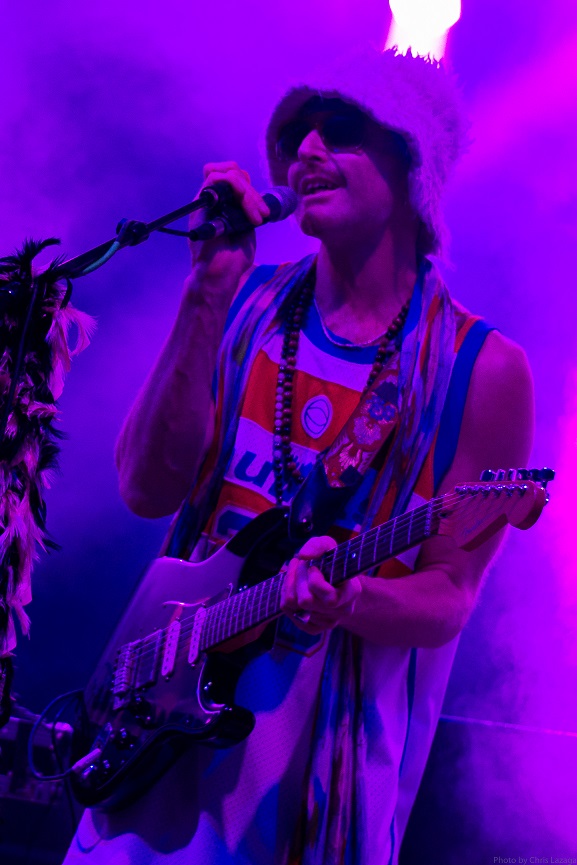 After the extreme intensity of a condensed String Cheese festival closer, we had the opportunity to come down easily with Boombox. The duo brought us back to earth with an hybrid DJ set featuring music from their new upcoming album, “Western Voodoo,” due out October 19. “It seems a little bit riskier,” said Zion Godchaux about the new songs. “They’re all BoomBox songs, but we’re kind of holding them in the light a little differently.”
The grooved out, house music infused set tied off the weekend nicely – so nicely many didn’t want to leave, instead huddling inside a glowing pyramid for a post-festival smoke. By the end of the last set of the weekend, we were a filthy mess. Dry mud caked bare legs up to the knees. It covered shoes, shorts, shirts and skin.
Ironically, the day most plagued by nasty weather turned out to be the most memorable day of the festival. The staff handled the situation smoothly and aside from some minor delays, the final day of festivities went off without a hitch.
As we left the festival grounds for the last time, a unicorn trundled out of the darkness atop a golf cart. “Every one of you is AWESOME!” shouted one of the passengers as the cart bumped along past us. Music, mud and a unicorn. Yea, Waterloo was awesome.
SCI Setlists (from FriendsofCheese.com)
9-7-18
Set One
Dudley’s Kitchen > Close Your Eyes > Betray The Dark, Manga, Texas Town, You’ve Got The World, Vertigo > Sirens > Desert Dawn
Encore
Nothing But Flowers, Black Clouds
9-8-18
Set One
Hi Ho No Show, Best Feeling > Song In My Head > Windy Mountain, Get To You1, The Big Reveal, Joyful Sound > Rumble, Rosie > Short Skirt Long Jacket > Rosie
Encore
Shaking The Tree, Colorado Bluebird Sky
Notes
1 with Lyle Divinsky
9-9-18
Set One
Sweet Spot, Let’s Go Outside > Restless Wind > Pygmy Pony, Illegal > It Is What It Is
Encore
Live Forever > Texas