Mammoth Water is here to funk. 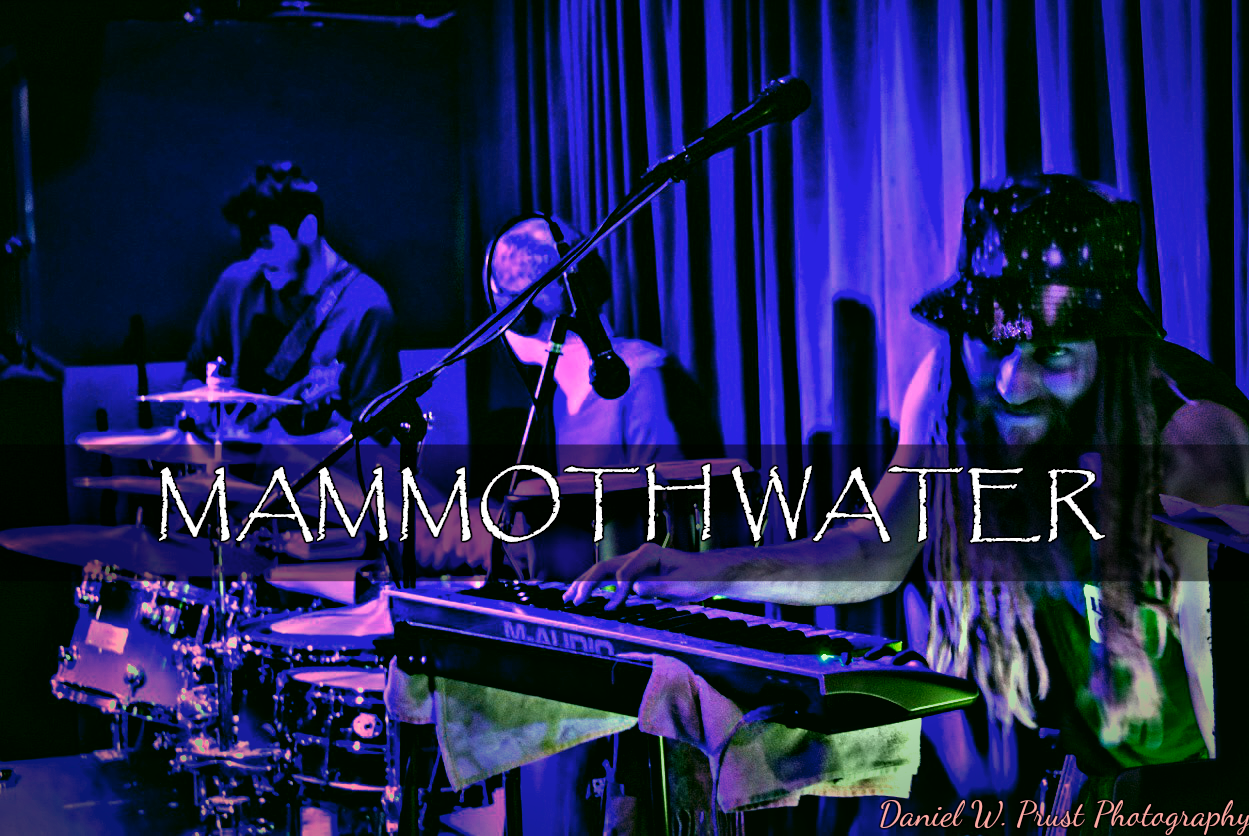 Pushing the limits of improvisational funk-rock, Denver trio Mammoth Water is making tidal waves in the Colorado music scene. Using their funk-rock dancetronica fusion, the trio creates a fresh experience at every show while maintaining their party music vibe with every experience. Incorporating elements of hip-hop, house music, rock, and a plethora of other genres, Mammoth Water’s powerful yet fluid sound lives up to their name.

Sitting down with guitarist Dylan Tuthill and producer and multi instrumentalist Jason Ahlquist quickly gave us a feel for the powerful chemistry the band shares. While drummer Ben Cummings was out of town at the time, his contributions to the band couldn’t have been expressed further by Tuthill and Ahlquist. The conversation we shared shined light on the origins of the band, the journey they’ve shared, and what is to come in the near future.

Compose Yourself: Mammoth Water, thanks for taking the time to speak with me. How did you guys meet?

Dylan: No problem! We actually met on Craigslist. What’s really crazy is Jason and I are both from Michigan and never met each other before moving out here.

Jason: What’s even crazier is we both went to college together. Same school, same years.

Dylan: Yeah, Jason grew up about nine miles from my house. We’re the same age but just never bumped into each other before coming out here. I used to play his high school in soccer, we both moved out here at about the same time.

Jason: Yeah, I was just looking for people to jam with. Wanted to see if there was any talent out there.

Dylan: So he hit me up and responded to my ad and asked if I liked Vulfpeck. I was literally listening to Vulfpeck as that message came through.

Jason: We were just already synced up from the start.

How did Ben get involved?

Jason: Ben covered drums for me in February when I broke my wrist. He moved out to Colorado in March because he loved playing with us and for the Colorado music scene, and officially joined and began playing shows this April.

Dylan: It’s actually wild, because if Jason didn’t break his wrist, I don’t think we would have moved to a three piece. I think we all really enjoyed the few shows we played together so much that it just had to happen. Few months later Ben moved out here.

How does Ben’s personality fit your group’s dynamic?

Dylan: Ben’s personality has really meshed perfectly. Jason and him go way back to high school. So they have been best buds forever. They have that “we are brothers” thing going on, which is amazing because that’s exactly how J and I feel about one another. It’s a family unit, truly. And Ben is exactly what we needed in a third member. He’s so positive and optimistic about the future. The guy also is a business wiz kid, so on a business front we have grown a lot as well.

What can you do differently now that Ben is a member of the band?

Jason: Now that Ben has taken over for me on drums I am freed up to play bass/keys/electronic midi sampling/dj-mixing/sound production/ and even bongos! It brings a whole new funky flavor to an already very upbeat fun sound and allows us to create more texture as well as dynamics!

How did you come up with the name?

Jason: The name is a long story. We won’t release that until we’re like 70. And who knows if we’ll ever tell the real story..

Dylan: Phish is probably my biggest influence. My family grew up with that, so my parents love the Dead, love Phish. As I started playing the guitar, I noticed all these crazy things that guys in jam bands were doing. I’ve just been really into that stuff, lately I’ve really been digging the Disco Biscuits too.

How long have you two been playing together?

Jason: A little over a year. We had an incubation period where for a couple months we were getting together almost every night and just hammering it out. We were definitely pushing each other.

Dylan: We’ve just worked really hard at it. And I think living together has really made an impact. When we moved in together, we were practicing almost every night for weeks. We’re never satisfied where we are; Jason specifically pushes us both to get to another level.

Jason: I almost wouldn’t even consider it pushing – it’s demonstrating how determined you are to the music, and seeing the other person put the time in, and being even more inspired by them for everything they’re contributing.

So where did you record that tracks that you’ve released?

Dylan: We’re super lucky that Jason produces all of our songs. We have some stuff in the works that we’re planning to get out eventually. At this stage we just want to build our chemistry because so much of it is improv.

Jason: After trying out a bunch of stuff on stage, it makes it way easier during production because we know what works and what doesn’t.

How would you describe artists in the Denver music community?

Jason: Extremely supportive, everyone is welcoming and wants to see everyone else succeed.

Dylan: I truly feel that people actually move out here to become a part of it. And we’ve been able to jam with some of our favorite bands in this basement, sometimes until like 5am. And its like creating with and surrounding yourself with people that are hugely successful is one of the most important things we can do as musicians. Denver has this like Mecca of the West feeling…and I just dig it. The fans here are also incredible.

Jason: The fans are really invested, they’re about it. It’s the reason a lot of people live here, and have moved out here. It’s a cool scene to be a part of. It’s a family.

What is your favorite show you’ve performed?

Jason: Globe Hall, I think it’s just the best we’ve sounded. From the perfectionist’s view, it’s the one we were able to walk away from saying “I didn’t really mess up at all”.

Dylan: So, we went home to Michigan for Thanksgiving. We got to play a show in front of all our hometown homies and up to that point we hadn’t gotten to show any of our friends from home any of our music live so it felt like everyone came out – there was 150-200 people there. Jason nor I had been home in like a year and it was the culmination of all this hard work that we got to share with our friends.

Which Pokemon would you be if you were one of the original 150?

Dylan: I would be Charizard for sure. He’s such badass and like did his own thing. He wouldn’t get captured and when Ash would throw him out he’d be like “Fuck you dude I don’t want to battle”.

Jason: I would be Mewtwo. I think he would have a good mind for producing.

What upcoming shows do you have planned?

Dylan: Spread the Word Music festival is May 3rd, a lot of friends are playing at it and we’re part of the preparty at Mile High Spirits Distillery.

Jason: A lot of funky bands will be there, should be fun.

Dylan: Then we’re doing a tour with Stormy Chromer. They’re a dope band from Michigan. They’ve played with Aqueous and Main Squeeze before. They’ve been wanting to come out to Colorado so we’ve got a few shows in Denver lined up, a night in Fort Collins, and hopefully we’ll get a show in the mountains figured out. The dates are June 4th – June 9th.

Jason: Super stoked to play with them.

Anything else to add?

Jason: Our goal is to inspire creativity in others.

Dylan: The fans that have accumulated for Mammoth Water have been unbelievable. Building off what Jason said, we want to inspire people to pursue their creative side.

Jason: We’ve kinda coined the term “Mammoth Herd”. It’s kinda a play on words – the mammoth crew needs to be heard and it’s a bunch of individuals who have voices and are really active in the Denver community and, including ourselves, we really want to be heard and spread this message we have.