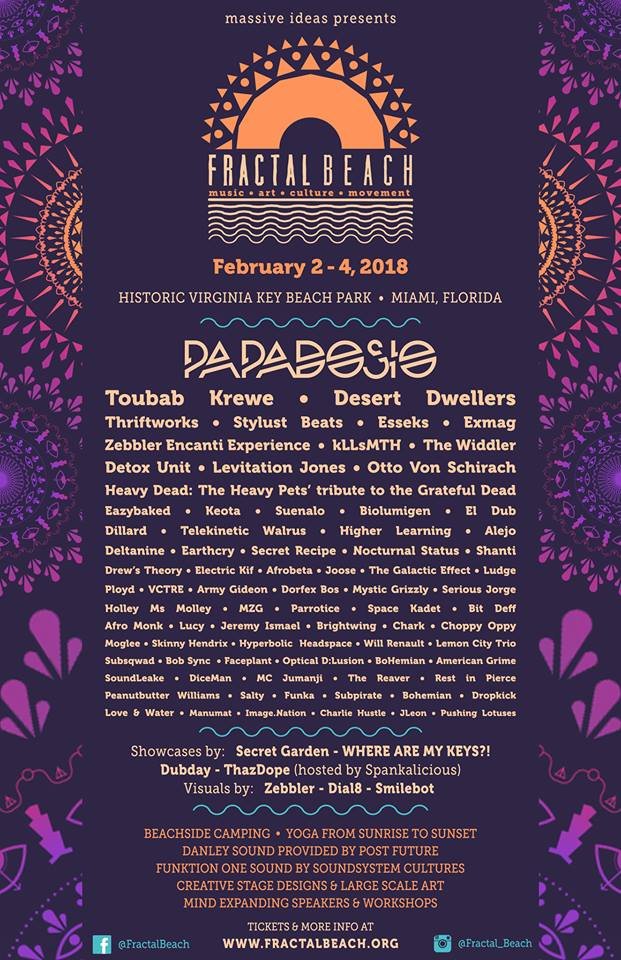 Starting out 2018 with a jump on the festival schedule, the second installment of Fractal Beach is here to tempt you. With an impressive lineup of music, live art, and panel speakers, we’ll give you a few reasons to put Fractal Beach on your sights this weekend. Artist highlights include Exmag, a supreme electronic funk band, instrumental quintet Toubab Krewe, analog wizard Earthcry and many, many more.

Fractal Beach will implement many unique amenities on-site, such as The Reality Playground which offers several different augmented reality simulation stations, miniature beach front cabins, individually curated stages and more. Attendees have the options of basking in several realms of music genres and educational workshops and panels. Festival founder Anders Sherberger had this to say about the inspiration behind Fractal Beach:

“Fractal Beach is modeled after other “transformational festivals” like Lightning in a Bottle, Symbiosis, Shambhala, and Envision. The idea is to mix yoga, music, workshops, and tons of amazing art to create something that’s more than an event; it’s a container for change. We’re excited to bring South Florida its first transformational festival.”

Fractal Beach will be Miami’s first ever transformational festival, and we urge you to be apart of it. The weekend starts February 2nd – February 4th. Grab your tickets now!