“What…what the fuck are we doing out here in the middle of the goddamn desert?” —Dr. Gonzo

Every time I go out to the desert I can’t help but think of the opening scene of Fear And Loathing In Las Vegas, where Raoul Duke and Dr. Gonzo are tripping out on acid in the red convertible. Maybe it’s because it’s my favorite movie, and I have it seen it too many times. Or maybe not, and it’s an honest feeling of ‘what the fuck are we doing out here?’

This time was a bit different seeing as how we drove out in the dark, long after evening rush hour, giving us plenty of time to round up booze, supplies and proper outfits. After leaving Venice it was full speed east towards Desert Daze, the rather new-ish music festival that, to be honest, I knew almost nothing about. Of course I had looked at the lineup, but I didn’t really recognize many of the names. One thing I did notice though was that there wasn’t a single “DJ…” something which is quite a feat in, and of, itself these days. The few names I did recognize were all of unique style and substance, bands like: The Allah-Las, King Gizzard and The Lizard Wizard, Ariel Pink, Unknown Mortal Orchestra, Eagles Of Death Metal, Twin Peaks, and Kurt Vile. 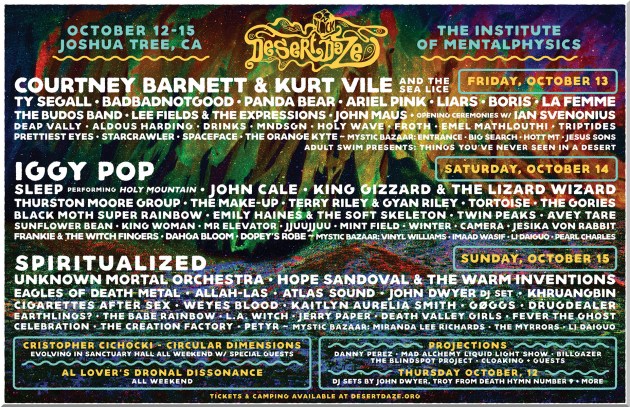 My partner in crime and I actually missed the first night, only arriving at the stroke of midnight and the music curfew was a strict 12:30. There was already a steady stream of people exiting the site, en route to their desert abodes, and I didn’t want to pull a salmon and swim upstream. Camping was an option, but my non-professional opinion is that most people had off-site accommodations—I mean, we sure as shit did. I know better than to camp in a perpetual dust storm that fluctuates from 100 degrees by day, to a mere 40 degrees at night…(unless, of course, we are talking about Burning Man).  Luckily, our spot was nearby, only 15 minutes away, in Pioneertown. And although I can’t speak to the first night of the three day festival, once we got to the house, and I saw the state of (altered) consciousness of my friends, well, it was a dead giveaway that it must have been a bitching time.

When I had invited bae to join me from Venice she asked if we had passes, I told her that I did, I had an artist’s pass…allegedly. And I was (fairly) confident that I could finagle a way for her to get in too. We had both done this before, and those who 007 their way into events know that the trick is rarely the obvious measure such as jumping a fence. It’s usually much better to go the James Bond route—dress to kill, walk tall, bust out your devilish grin and, most importantly, hope no one asks too many questions. 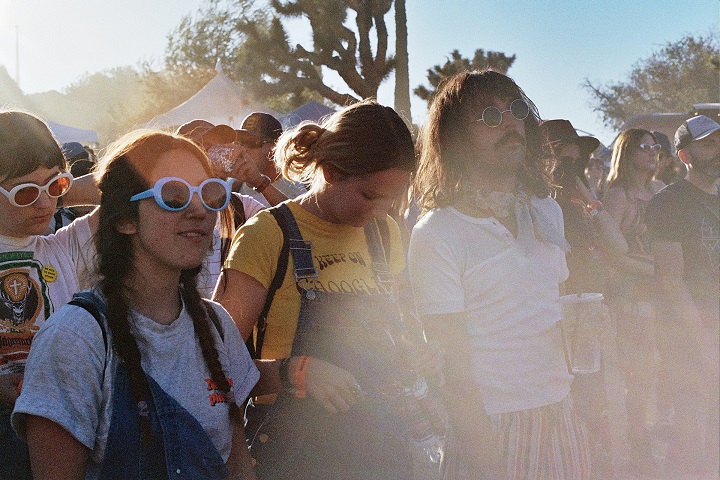 We started the day off with brunch at Pappy & Harriet’s, after a few incredibly stiff Bloody Mary’s, and some banter with the barmaid, we were ready to seize the carpe. For those unfamiliar with Pappy & Harriet’s, it’s about 15 minutes from the town of Joshua Tree and sits along the edge of an old western movie town—Pioneertown. The town was built back in the day by a couple of Hollywood cats who wanted a permanent movie set to film all of the Western’s which were all the rage in the 1940s.

Aside from a few notable exceptions, today the town’s buildings sit idly empty, waiting in lieu of tourists who want their photo taken in the “jail” (a one person stall with wooden bars). One of the exceptions is Pioneertown Post Office, apparently it is the most photographed post offices in all of the U.S., another is the vintage store…and I’m sure you can imagine which one we hit.

Some more banter, a coffee, and one fringe leather jacket later and we were really ready. We walked to the road and, as I was about to request an uber, a golden chariot appeared out of the dust like a mirage. While it wasn’t actually a golden chariot, it may as well have been. It was a giant sponsor van (whose company name I’ll omit for privacy purposes) that skidded to a halt in a giant cloud of dust.

“Hell yes!” I said. “You’re going to the festival right?”

“Where the fuck else would I be going? Hop in!”

And just like that, with absolutely no idea who “Billy” was, we were on our way to the festival in maximum style—riding in the back of a windowless van, going high speeds on winding desert mountain roads with a total stranger behind the wheel #goodtimes. 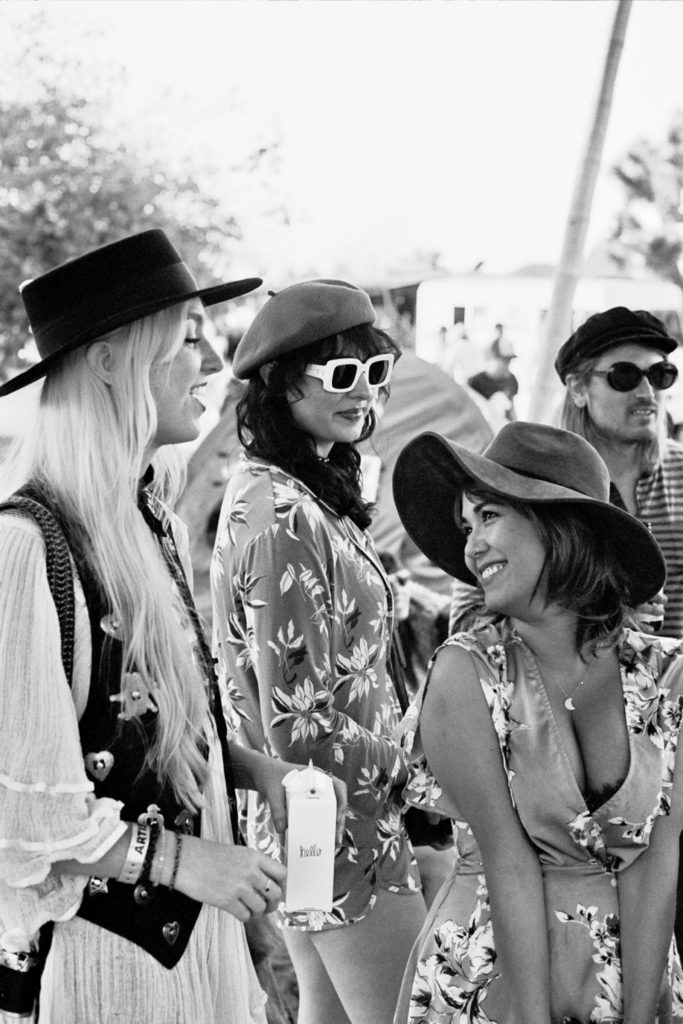 We unloaded in the backstage artists area (V dope) and when we got out into the crowd it felt like we stepped through a portal and gone back in time to some sort of hybrid of the early 70’s. Hip heads rocking far-from-basic styles of all kinds: there were the classic barefoot, sun-dressed, dancing-in-the-dirt babes; the biker gangs, with their all-black outfits and jet black hair; the psychedelic intellectuals, reminiscent of John Lennon, Janis Joplin, Bob Dylan & Joan Baez, with their circular shades and overalls matching their beatnik personalities; the surfer bros, with their blond hair turned white from the dust, barefoot with their Hawaiian shirts and cutoff shorts, along with their dusty babes, rocking yoga pants and unicorn kaleidoscope tops. All of the hip, funky and vintage styles, set against the backdrop of countless Joshua Trees and the amazing mountainous desert skyline made me think, “this could only happen in California…”

Although I was bummed I missed some of the acts on Friday, I still got my fix of quality rock n’roll. My favorite, hands down, were The Eagles of Death Metal, followed by The Allah-Las and then The Unknown Mortal Orchestra. The best part of going into a festival without knowing much of the lineup, is being blown away by a group you had never heard. This was the case with Eagles of Death Metal, aside from hearing about the horrific terrorist attack at their Paris show in 2015—I knew nothing about them. I imagined that, as the name seems to imply, that they would be a death metal version of The Eagles. Definitely not. What I saw and felt was a sheer display of pure, uncut, balls-to-the-wall rock n’roll. It didn’t matter I didn’t know any of their songs, I was stomping my feet and banging my head to each riff. I kept yelling over the music to my homies, “THESE GUYS RIP!” 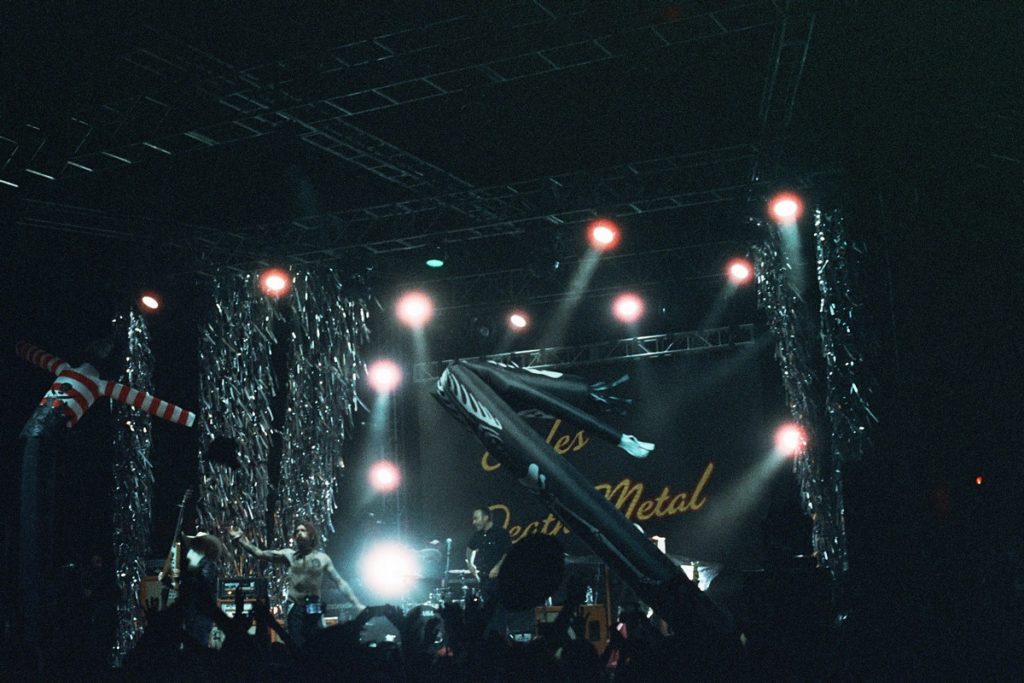 They would nod and scream, “I KNOW!” and continue to head bang and jam on their air guitars. Then, about half way through their set, the most amazing and unthinkable thing happened. Lead singer, Jesse Hughes (aka The Devil aka Boots Electric), was speaking to the crowd and said, “We’ve got to thank David Bowie for this one.” Being a huge Bowie fan, my interest was instantly piqued…and the second I heard the opening riff of “Moonage Daydream” it felt like my brain had an orgasm through my ears. I let out a high-pitched “yeeeewwwwwwwwww!” over and over and jumped up and down as high as I could, screaming like a maniac and grabbing my friends by the shoulders. I never got to see Bowie live, but that rendition immediately cemented itself as one of my greatest festival experiences.

Earlier that day, the Allah-Las put on my second favorite performance of the weekend. It was definitely on the more mellow side of sets that weekend—and I was all for it. It was late afternoon and the sun was radiating a warm golden glow all along the desert floor casting the Joshua Trees in a shop silhouette that was a perfect backdrop for their sun-drenched grunge-y sound. The crowd was also completely on point, a bunch of beautiful freaks naturally groovin’ and swayin’ to the beat. 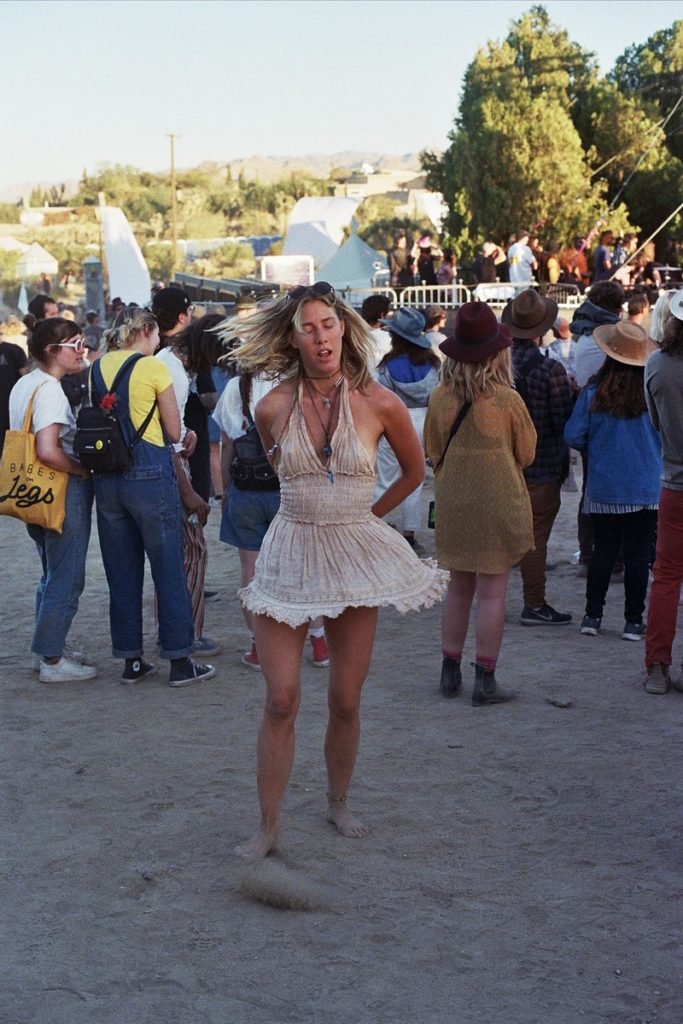 Again it felt and looked like something out of a movie. Almost as if it were a live fashion show in which everyone was a participant and the catwalk was the desert dance floor. The more I looked around, the more I couldn’t help but notice the amazing vintage cameras: 35mms, Polaroids, medium formats, Super 8s, drop-downs, and I even saw one girl lugging around a full size VHS recorder…it must’ve weighed 15lbs! So, aside from being a hip psychedelic fashion from the past, it also felt like a vintage camera convention.

Months later it’s still fresh in my mind, it stands out like a juicy steak in a sea of vegan cheese. While all energy flows according to the whims of the great magnet—I daresay I hope the winds of fate blow me back next year…I suggest you get yourself some crunchy threads and meet me there. 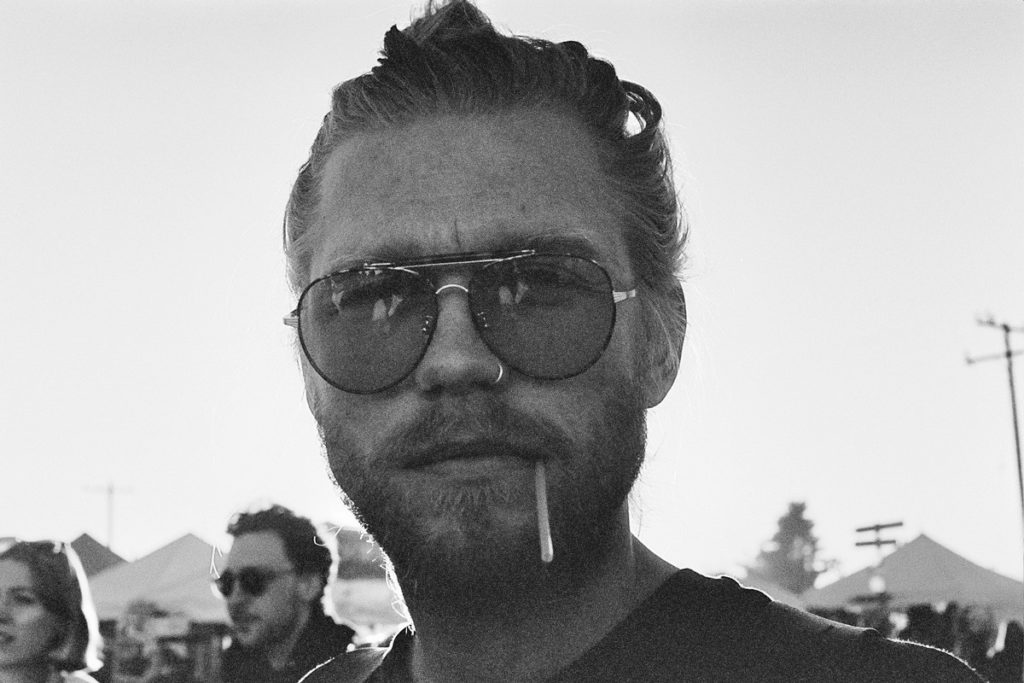