Shortly after releasing their 11th studio album, it’s not us out January 12th. Umphrey’s McGee will embark on a huge winter tour in support of the new record. The initial tour announcement runs through March, and includes a plethora of dates from coast to coast. During the course of the lengthy 29-night headlining trek, the band will be making multi-night stands in Denver, Cincinnati, New York, Philadelphia, Asheville, Aspen, Portland as well as a return to Kalamazoo. 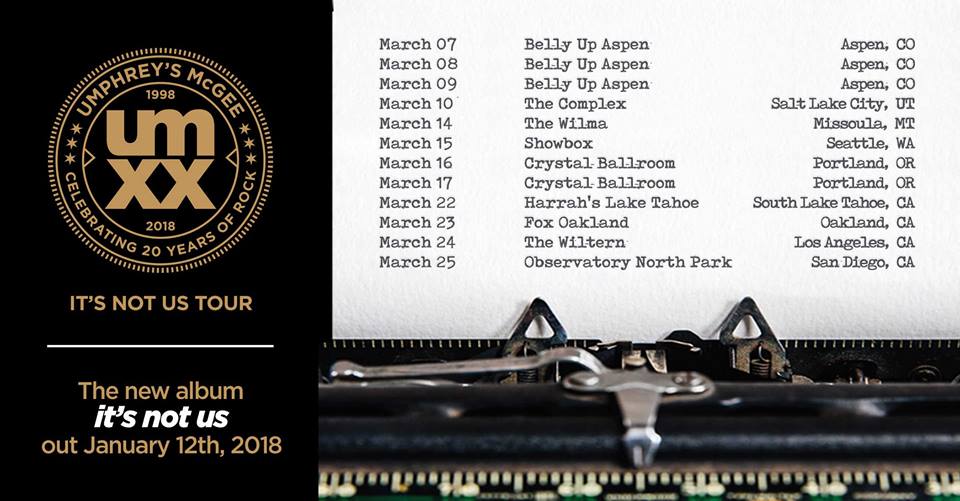 During their playtime in Michigan, the band will headline the Wings Event Center in eastern KZoo on February 2nd and 3rd. A facility that hosts hockey, ice skating and arena-sized rock shows. Around the same time last year, Umphrey’s rocked this venue in what was certainly a special evening for the group. Their set that night included powerful versions of old-school jams, as well as a number of song segues and sandwiches. Friend and featured saxophonist, Joshua Redman joined the band through both sets, igniting colorful versions of “Believe the Lie” and the Police cover “When the World Is Running Down You Make the Best of What’s Still Around.

Armed with a new album and a refreshed sense of direction, Umphrey’s will be looking to add to their already massive following, while shining light on new talent such as The Marcus King Band who are slated to open both Michigan shows. Named after the extremely talented lead guitarist and singer, The Marcus King Band is a refreshing and soulful addition to the rock ring. At the ripe age of 21, Marcus King is the songwriter and musical powerhouse behind the group. With a powerful vocal range and an unprecedented way of working his way around a six string, Marcus King has begun to catch the attention of many including Umphrey’s McGee. Don’t be surprised if UM brings the prodigy on stage for a sit-in at some point over the two-night run.

Colorado is readying themselves for a three-night Umphrey’s NYE run at the Fillmore, where fans are sure to hear a healthy helping of new music from the upcoming album. While the album isn’t officially out until next month, the band has released two new songs from the album. “The Silent Type” is a straight forward rocker of a song that will keep your foot stomping for the full three minutes. The song is contains distorted, aggressive vocals and consistent guitar solos. “Half-Delayed” has a more classic Umphrey’s feel. It features melodic guitar work dancing in between piano and synth keys that ultimately lead to a powerful conclusion.

Even after two decades as a band Umphrey’s McGee continue to push their musical boundaries. These prog-rock veterans not only strive for perfection in their music and their live shows. They offer a truly immersive experience that encompasses tech-fueled innovations of light and sound. Don’t skip out on the band’s return to the Wings Event Center in 2018. They are sure to include some special tricks as they also celebrate their 20th Anniversary playing together.

Tickets on sale now! These include two night packages and the infamous Headphones & Snowcones VIP tickets.