Walking into Ophelia’s Electric Soap Box in downtown Denver, I was immediately surprised by their size and set up. Ophelia’s is more of a bar than a true concert venue, and is very tiny for a show of Random Rab’s magnitude. It’s no wonder the show sold out days in advance. It has a small dance floor, and little upstairs bar area that gets crowded fast due to its prime view of the stage. The sound was very good for the size of the room, but I was disappointed with the crowd. I couldn’t tell if people were too drunk, or just didn’t know that a show was taking place, but there was almost more crowd noise than stage noise for parts of the show. You can barely hear the artists on stage in the videos I took, and at many points I had to move away from specifically loud talkers. Having said that, the speakers were great for the size of the show, and it was the artists that put on a hell of a performance. 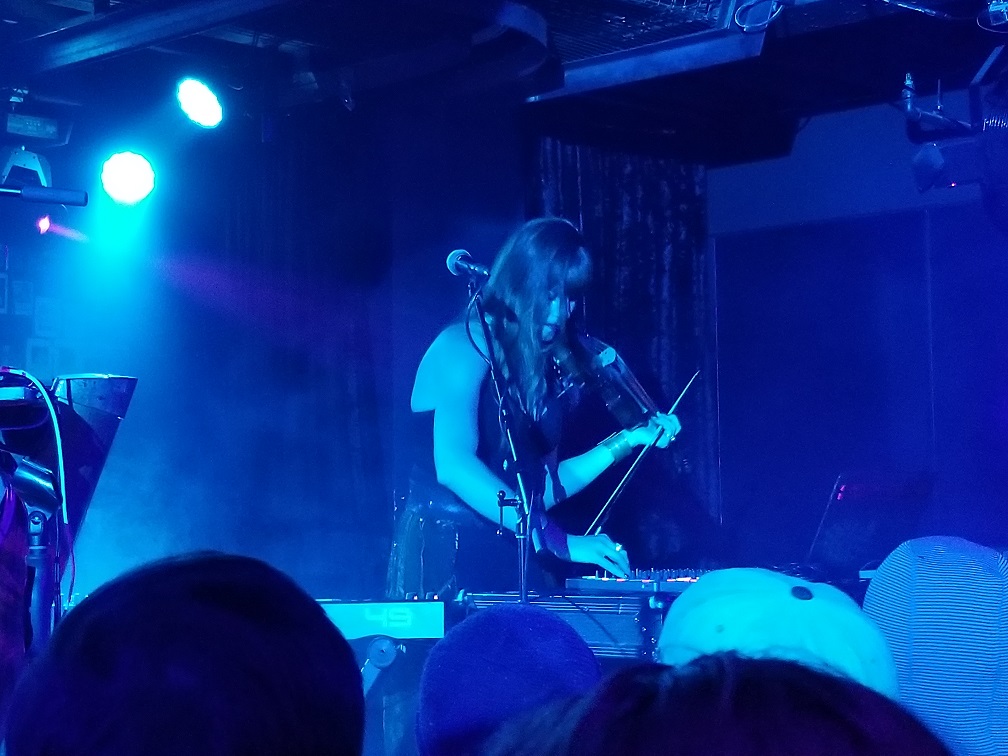 HӒANA was getting ready to take the floor when I arrived. She looked sleek in a mostly black outfit, and put on an eye-popping show to boot. From the violin, to the piano, and her drawn out vocal notes down to the dirty bass music she was DJing, I was impressed.

She really captivates with the violin, and plays with the crowd’s mind using her vocals. There were certain points where she was singing and playing piano or djing and playing violin at the same time. Seeing her master multiple instruments simultaneously is truly a spectacle.

HӒANA had dancers come out on stage including a ballerina for her song “Leya”, which she had previously written for a friend of hers who happens to be a ballerina. She played an unreleased track “Ink”, as well as her Massive Attack cover. Both were full of energy and flow, as she danced around the stage with her slick movements. HӒANA finished with the track “Salt” which is full of violin and one of my favorites by her.

I had expected this to be the end of the magical violin sounds, but after the break I was treated to a pleasant surprise. Random Rab was playing guitar with none other than Ilya Goldberg of Emancipator. To say the crowd was happy would be an understatement. Ilya played almost, if not more than half of Random Rabs 2+ hour set. He weaved the violin in perfectly, listening to Random Rab’s cues as he instructed Ilya whether to play a little keyboard, the violin, or let Random Rab jam out to his own tracks solo. Random Rab’s getup was funky as usual, with the intricately woven jacket, large brimmed hat and long graying hair. His tracks were also funky, playing more downtempo hip hoppy tracks, as opposed to his uptempo dancy tracks that he played at the Fox theatre not too long ago. Random Rab spun hits such as, “A Little More Free”, “Propose”, “Release” and “Apparently”. His vocals really filled my heart and along with all of the other toys he has at his disposal (including Ilya’s violin), it was truly a unique and mind-blowing show. For more than 2 hours, they captivated the audience putting everyone’s head in a daze with their trippy trancy music.

The sound and visual team also had some spectacular lights going on, with a trippy visual projecting on to belly dancers as they moved. Overall despite the crowded venue and rambunctious crowd, the show was amazing and truly unique. Do not miss HӒANA, Random Rab or Ilya Goldberg at any of their future sets!