The New England Blues Summit is a three day blues festival that provides a world class slate of blues performances along with lodging and meals. It is produced by veteran promoter John Hall, of Rhythm Room Entertainment. It ran from Friday April 28, 2107 – Sunday April 30, 2017.

Now in its second year, the NEBS takes place at The Cape Cod Resort and Conference Center in Hyannis MA. Unlike most blues festivals, this festival takes place entirely indoors on the sprawling grounds of the resort complex. 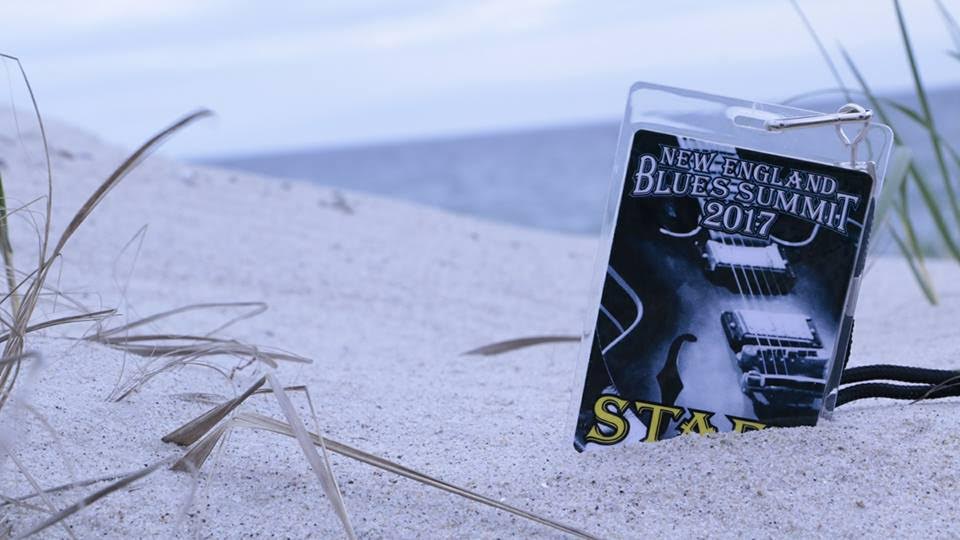 A weekend pass to this year’s festival granted access to all events, including the all star line-up of shows, the Youth Band Showcase, the Acoustic Showcase and the Blues Panel Discussion. There was even a NEBS Golf Tournament on the resort’s 18-hole golf course.

A quick glance at this year’s line-up makes you realize this was a “must not miss” event. The line-up consisted of several highly acclaimed, nationally touring acts including: Shemekia Copeland, Tommy Castro and The Painkillers, Mike Zito, and Anthony Gomes. The impressive bill was rounded out by regional fan favorites: Johnny Hoy and the Bluefish, The Grits and Grocery Orchestra, The Willie J. Laws Band with Diane Blue, Anthony Geraci and the Boston Blues All Stars, and Racky Thomas and the Traveling Medicine Show Revival Band.

The show kicked off at 3PM on Friday, with Johnny Hoy and the Bluefish playing a free show in the resort’s lobby lounge. Unfortunately I was delayed by traffic in the Boston area and missed it. But I heard from several rave reviews of their performance.

I got to the resort about 30 minutes before the opening act went on in the main ballroom. After a minor glitch with my reservation that was quickly resolved, I was able to check into my room. NEBS Producer John Hall, always the gracious host, gave me a free t-shirt for my inconvenience. Luckily there is a liquor store literally adjacent to the resort. I took a quick walk over to stock up on provisions. 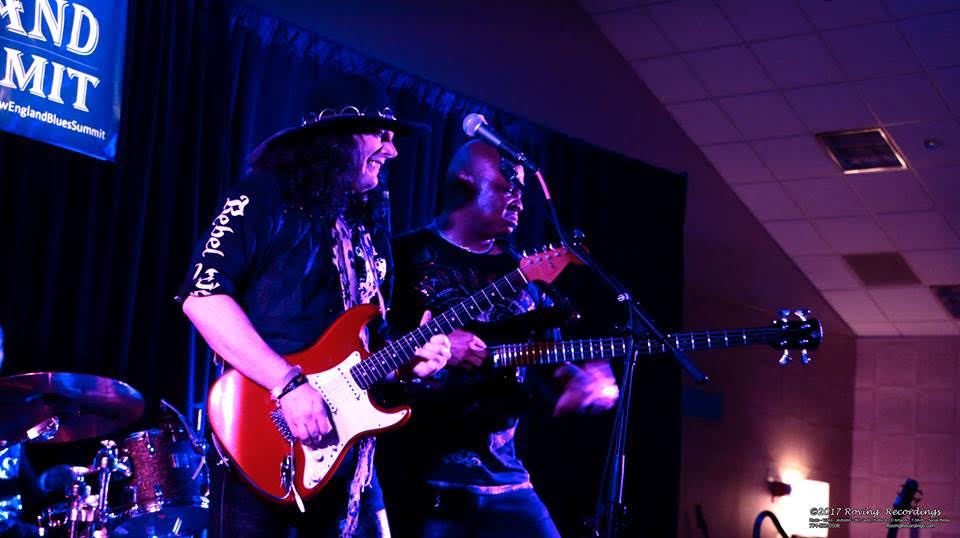 Soon I headed down to the main ballroom to catch Anthony Gomes. The Toronto born singer/songwriter/guitarist, who now hails from St. Louis, did not disappoint. Gomes, with his high-energy, dynamic stage presence, flamboyant style and vast array of electric guitars, at times seems to channel the spirits of Stevie Ray Vaughn and Jimi Hendrix. His back line, consisting of Carlton Armstrong on Electric Bass and Freddy Spencer Jr. on Drums are both solid and exciting. Each played excellent extended solos during the set. Gomes also showed his versatility when he ended his set with an acapella version of an old slave spiritual. It was a beautiful close to his set.

After a brief intermission, the Friday night headliner, Tommy Castro and The Painkillers came on. Joining The Painkillers on stage was guitarist Mike Zito. Many blues fans may remember Zito as a member of that storied outfit, the Royal Southern Brotherhood.  Castro and Zito have combined forces for the “Six Strings Down” Tour. This “dynamic duo” is causing ripples of excitement throughout the national blues scene. The hype was well deserved, as this show far exceeded my expectations. Castro and Zito had the whole house rocking with their playful, unselfish guitar interplay and individual solos. It was a pleasure to watch their smiles as they interacted on stage. Their version of CCR’s Fortunate Son was particularly memorable for me.

As their set wound down, Anthony Gomes joined them onstage. Wow. Having three legendary axe men onstage kicked the performance up to another level entirely. Before you knew it, “one or two more songs” had evolved into another 50-60 minutes of kick ass blues guitar that blew the roof off the joint. The entire house was on its feet rocking and dancing. 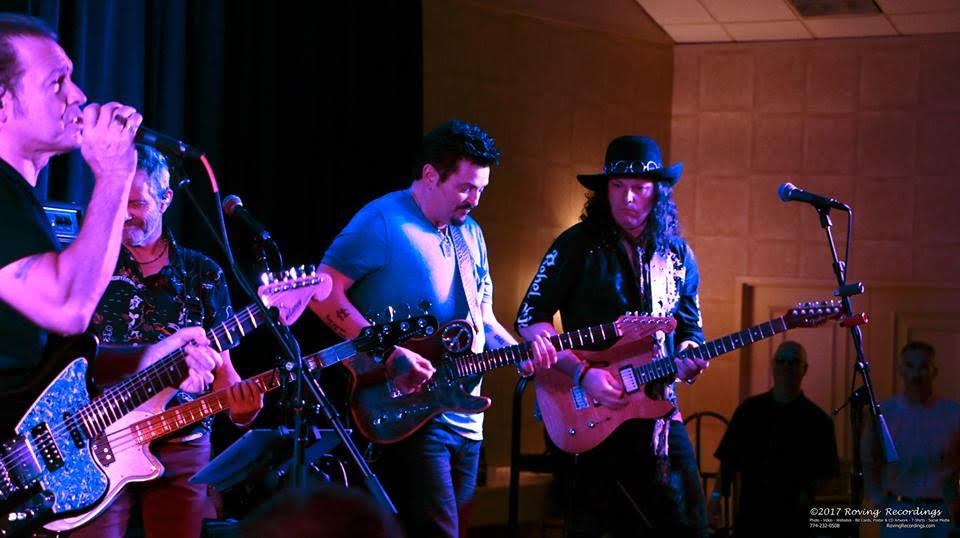 The trio wrapped up their extended set with an epic version of the Grateful Dead’s “Fire on the Mountain” into Buddy Miles’s “Changes” into Jimi Hendrix’s “Third Stone from the Sun” and back to “Changes”. It must have lasted a good 30 minutes and it had this old Dead-Head dancing too. As their finale came to a close, well after their scheduled end time, the trio bowed to the crowd and the crowd responded with thunderous applause.

As the set ended well after midnight, the room emptied. There was supposed to be an invitational blues jam at 11:15 but due to the fact that everyone seemed to be both emotionally drained and spiritually enraptured and that it was very late, I’m not sure it happened. 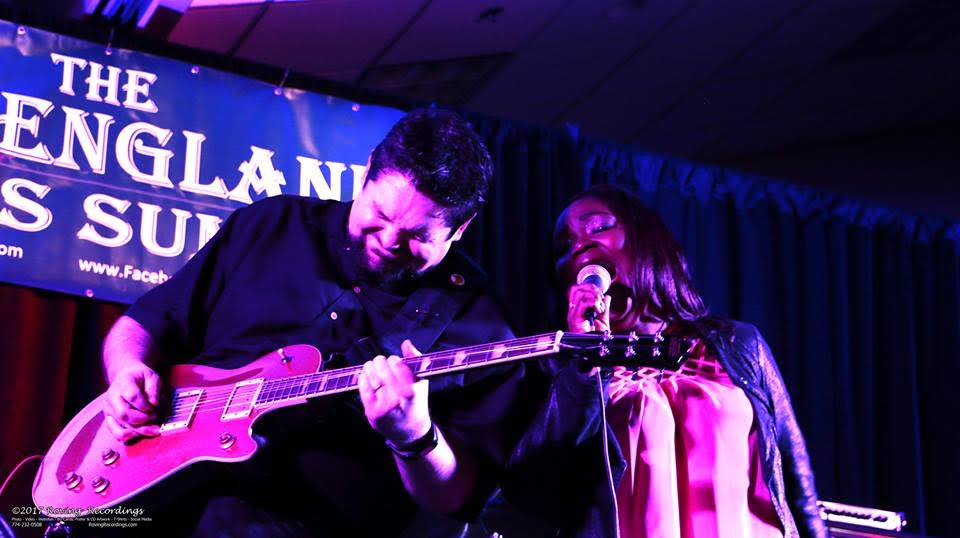 Day two started off with breakfast in the upstairs dining hall. I had the pleasure of enjoying my breakfast with legendary blues festival producer and blues show promoter Paul Benjamin and his wife Jean. Paul and Jean have been putting on the North Atlantic Blues Festival in Rockland ME since 1994. Paul produces or provides consulting services to blues festivals from Maine to Florida and into the Caribbean. It was great to hear Paul and Jean tell stories spanning their 25+ years in the blues music business including their quest to visit every sign marker on The Mississippi Blues Trail.

After Breakfast, The Grits and Grocery Orchestra got the music started in the Convention Center Lounge with the first of Saturday’s two free shows. Charlie O’Neal of Delta Generator’s fame played lead guitar. It’s always pleasure to watch his nimble finger work and slide guitar work as he plays his classic 1967 Gibson 355 Guitar. He’s one of my favorite guitar players in all of New England. It was a great set. 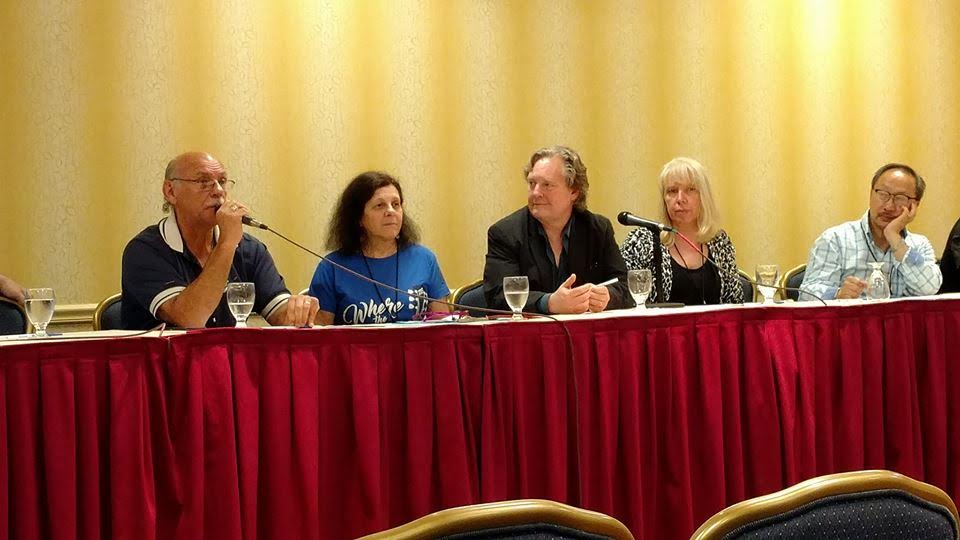 After the set, I headed upstairs for the “Blues Panel Discussion” which was moderated by the weekend’s guest emcee, Holly Harris of the Boston Blues Society. The Panelists were regional and national show producers and club owners who touched on myriad topics related to producing shows. It was well worth the time.

My next stop was a short, but sweet stop into the “Acoustic Showcase”. Sadly I only spent about 20 minutes there because The Willie J Laws Band was also playing downstairs. 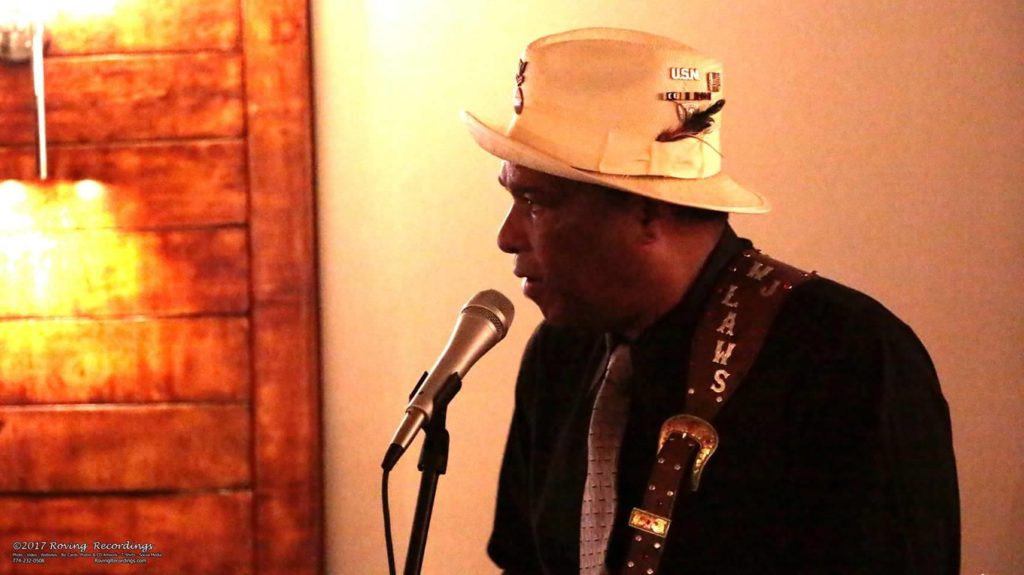 The Willie J Laws band was the second of the two free shows. Willie, who originally hails from South Texas, is known as “The Last Prophet of the Funky Texas Blues”. I’ve seen Willie play several times over the years, and I can say his set at the NEBS was one of the best sets I’ve ever seen him play. Diane Blue also sat in with him. It was seriously funky.

After our dinner break, the action moved to the ballroom for the first of the two main acts: Anthony Geraci and the Boston Blues All-Stars including “Monster Mike” Welch. Anthony is an elegant keyboard player and he shined this night with several exquisitely beautiful keyboard solos. Anthony was doing his “50 Shades of Blue” tour. Throughout the set, several of the “at large” performers came up and performed. This included 80 year old blues icon and female vocalist Toni Lynn Washington, vocalist Michelle “Evil Gal” Wilson, harmonica player and vocalist Sugar Ray Norcia. Toni Lynn Washington’s rendition of “Diamonds and Pearls” was particularly memorable.

The grand finale was Blues Diva Shemekia Copeland. What can you say? She’s Shemekia Copeland, daughter of Blues Legend Johnny Copeland. As per usual, she belted it out. I’ve seen Shemika play in New Mexico, Nantucket, Gloucester, Rockport MA, Rockland ME and elsewhere. She never disappoints. One particularly poignant moment was when Shemekia beckoned Toni Lynn Washington to join her onstage and paid her homage. Then they sang a kick ass blues duet that was one of the many indelible highlights from the weekend.

On my way to an after party in room 402, I got to walk with and chat with Shemekia and her Husband and meet her newborn baby. I was honored that she remembered me from working with her on the Nantucket Blues BBQ.

Thank God breakfast was late Sunday morning, as I had been up late helping my friend Nancy and her neighbors finish off a tray of Jello Shots. Oy vey. As I stumbled into the Sunday Blues Brunch in the main ballroom a little after 10 AM, I was pleasantly greeted by some beautiful Gospel music. 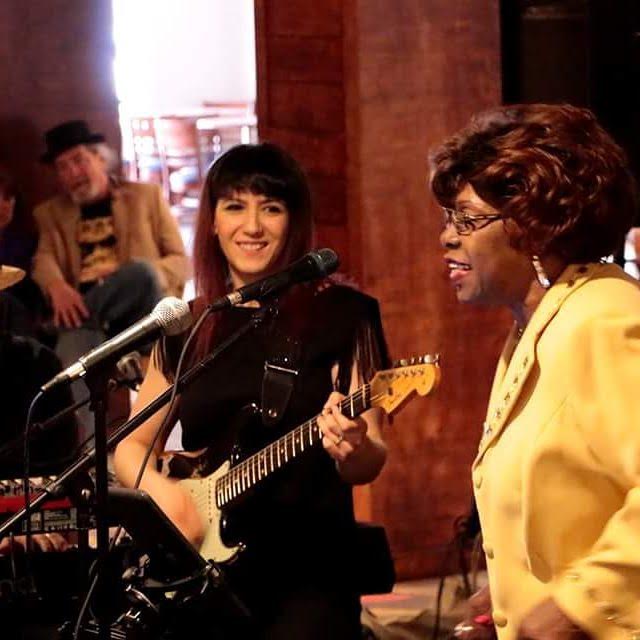 Whether you’re at a Blues Festival or a Bluegrass Festival, Sunday morning almost always begins with some form of Gospel Music. Racky Thomas and the Traveling Medicine Show Revival Band was as good as any band I’ve seen fit that bill. Blues and old time fiddle player Ilana Katz Katz sat in. They played a tear jerking version of “Amazing Grace” and an equally emotional version of “I’ll Fly Away” (That one hit home because it was one of my Dad’s favorite songs). They finished up with an uplifting version of “I saw the Light”. Hallelujah!! 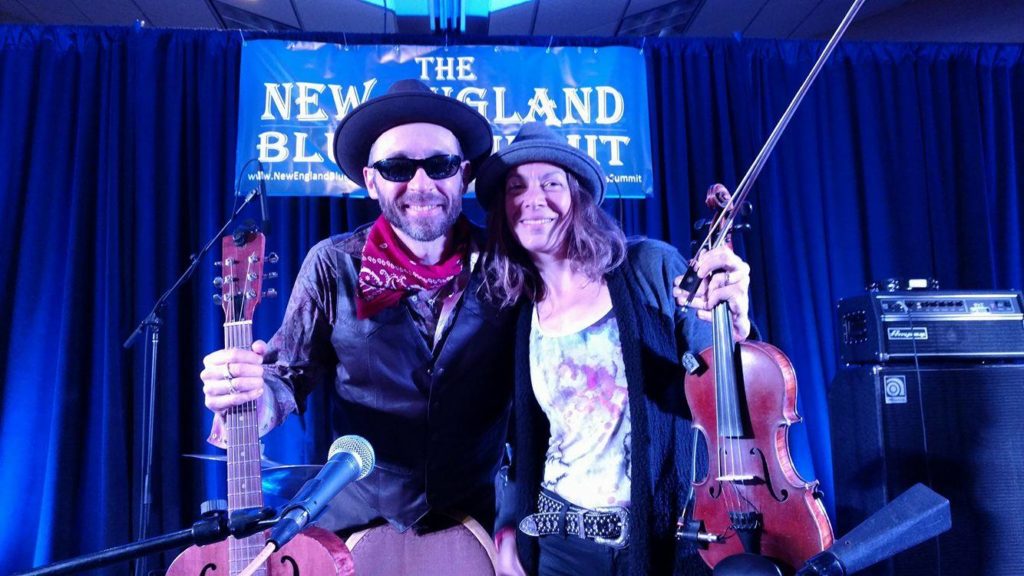 By this time, the crowd was dwindling as lots of folks were headed home. But there was still one final act, The Summit Farewell Show in the lounge / lobby area. The last 40 or so die hard festival fans that hung around were not disappointed. The Grand Finale featured Sam Gentile, Bruce Bears, Sonya Rae, Ryan Taylor and of course a rhinestone bedazzled Toni Lynn Washington. We all hung around, drinking Bloody Mary’s, jamming to some great blues and reflecting on what a great weekend it was. 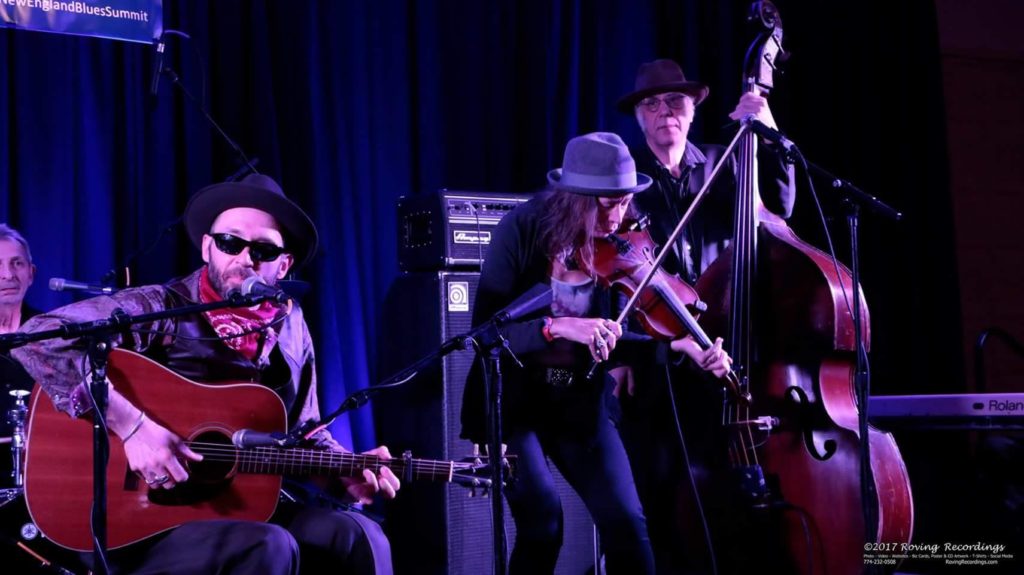 It was a truly magnificent weekend. I made many new friends and reconnected with several old friends. And when it’s finally said and done, isn’t that the Festival experience is all about???

Thanks for letting me share this experience. I hope to “Catch you on the Rail” soon!