Beats Antique is back with an album that spanned the Earth in search of the sound for its creation, an album built upon the sound that they have spent forming together and then explored in a way that can only come after ten years of production and mastery. The name of the album is Shadowbox, and in it contains a level of talent and musicianship on this record in unmatched by most of todays’ standards and combines elements that few musicians have ever even considered, let alone explored. The name Shadowbox captures the essence of the album perfectly, bringing their unique sound into perspective and immersing you into an audible wonderland of fantasy and proportion. They spanned the globe in search of its sound, recording in Israel, Moscow, New Orleans, and San Francisco. As an album of such complexity and ineffable articulation, it is almost difficult to put feelings of it into words, but the band was nice enough to give us a copy to review, so here it goes. 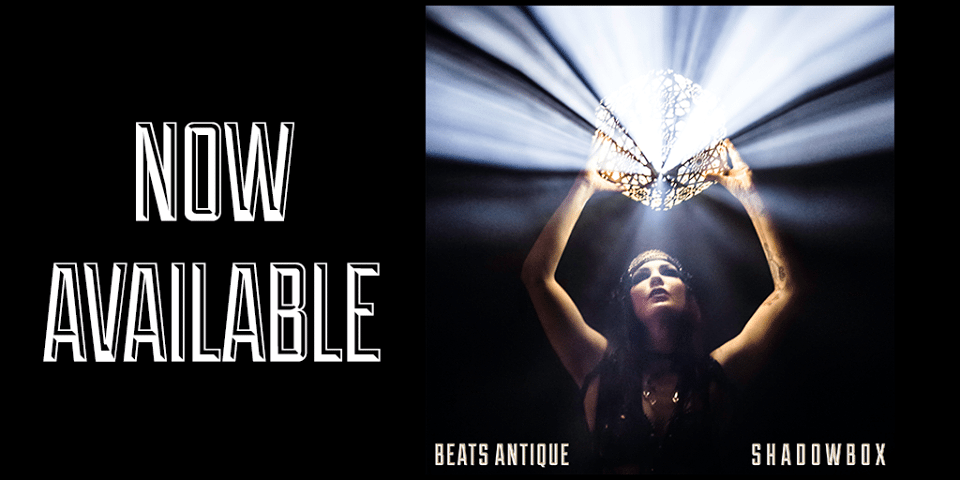 Right from the start, Beats let you know this piece of work is going to be a flight into the imagination. With an opening string line the voice of a Russian vocalist breaks into the track, followed by the re-introduction of the strings and dramatic acoustics, the gypsy influence immediately becomes apparent to create an atmosphere of spirit and mystery. A throwback to Russian playwright Anton Chekhov, ‘Three Sisters’ deeply explores the worldly nature of Beat Antique’s music, drawing roots from the Far East.

Fitting to their sound the next track ‘Killer Bee’ maintains the air of gypsy bohemia through the horns creating a sound almost carnival-esque in its creation. Aside from the gypsy feel the track maintains a grounding in jazz and instrumentally may consist of nothing but, aside from the acoustics. A far cry from the strings centered feel just one track ago. Though jazz based, the track features MC Lafa Taylor who gives it a hip-hop spin, thus combining elements I do not recall having been exploring in great frequency, yet is flawless in its execution.

‘Vespar Star’ is a synthesis of the signature gypsy jazz sound that Beats Antique has created, going into Vendetta, a more strings based track which begins to introduce more of the electronic roots present in their music, executing a sound that sounds like Gypsy Trap in its creation. This then leads into one of my favorite songs on the album, ‘Burn Dub’. ‘Burn Dub’ is a coalescence of all the tracks leading up to it, with a jazzy intro that carries within it an air of gangster swagger that moves into a tribal breakdown driven by a tumultuous horn section before pulling itself back together in it’s gangster-dom.

The next track: ‘Semblance’, moves fully into the electronic sound, complete with builds and drops, while still maintaining its acoustic elements of strings and piano. Semblance is a passionate and moving piece that sounds a bit like trance in mid tempo, having an almost moombahton feel to it, and breathes an aura of heavy nostalgia.

‘The Block’ is an explosive splattering of jazz, featuring TOO MANY ZOOZ, the jazz prodigies birthed through YouTube. The track sounds like a mixture of jazz and dub, bringing rock n’ roll elements in to the mix with a strong guitar part. The guitar becomes realized in the next track ‘Sideswipe’, which aside from the elements that had been explored in previous tracks, seems to consist largely of an improvised guitar solo that paints a picture with melody.

‘Le Refuge’ plays with the imagination, reassuming the electronic gypsy vibe in a track that is quintessential to the album and the Beats Antique sound. This segues into ‘The Fader’, which fitting to its name has an airy, uplifting feel to it. As it progresses it seems to drift off into a sunset of sound, dropping you gently into the clouds and bringing the album to a cadence. 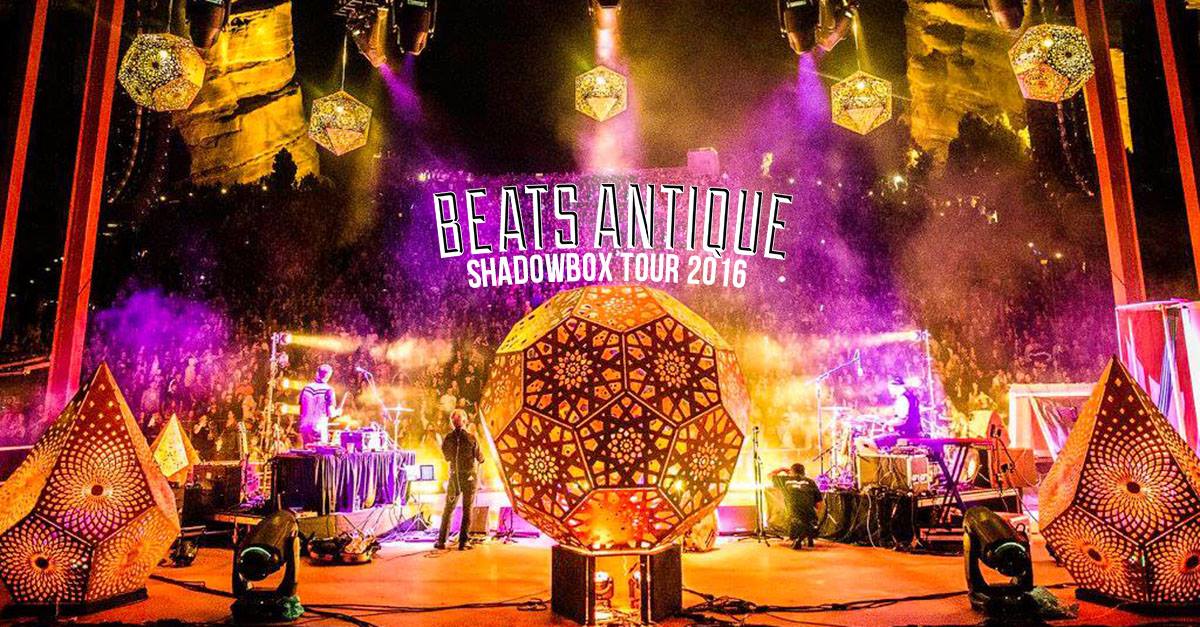 The level of musicianship on this album is absolutely outstanding. Never at any one point does the artistic integrity, throughout the course of its twelve songs, become compromised. Throughout the album there is numerous instances of one song piecing together into the next, while at other times one song ends like an idea, before reassuming a wholly new other at the start of the next. The elements combined in each track are those hardly explored by any other artist, in some cases if ever, and paint the soundscape with melodic Dali’s and arpeggiated Picasso’s of a surrealist persuasion. If you are a lover of good music, Shadowbox is sure not to disappoint.

CYM sat down with Dave Satori of the group at Symbiosis Festival to discuss the Bohemian influences that comprise the Beats Antique experience.

CYM: Shadowbox draws from all ten years of your history together. What universal elements comprise your sound?

Satori: A love for culture. We try to bring all these cultures together and create this universal gypsy culture. It’s the soul that permeates the Earth, we’re all on this planet together and each different group of people that have developed their own sound and their own thing.

CYM: Your sound has a very Israeli sort of feel to it. How do
you explore those roots?

Satori: Beats Antique started as a project for a belly dance. A belly dance group needed music so we made an album and it did alright so we made a second one. We made two albums together before we ever toured. This was in the first two years of our existence as a band, and they did well so we started touring in 2009. The middle eastern influence is definitely in the belly dancing. I’ve been influenced by gypsy music and middle eastern music for a long time so it was really cool to have that as a vehicle to mash up with a more experimental electronic sound like Amon Tobin

CYM: You’ve said that Zoe designs her dances in an effort to create a story. Would you care to elaborate on that?

Satori: Every dance is a story. It’s hard to explain because dance, like music, is beyond words. But she choreographs very specific ideas. She takes these influences from folk loric dance, which in Indian culture they are telling stories with their hand gestures, it’s like a sign language, and in it they are imitating gods. We did a traditional Indian dance in our set last night. She is remixing these dances of these cultures and embodying it in her own way, just like the music.

CYM: Aside from belly dancing what are some of the non-musical influences to your work?

Satori: Visual art is a big influence, as well as just the creative explorative nature of this community that we’re in. Alex Grey is a big inspiration of ours. Android Jones did our album covers for Contraption vol I and II and also Blind threshold. We did Red Rocks with Alex Grey not long ago, and he has become a good friend of ours. All the visionary artists are big influences on our music.

CYM: How do you manage to bring the Big Band element into the music?

Satori: We record. We record with multiple horn players and we just love layering the music. We worked with Preservation Hall Jazz Band from New Orleans and we had them layer their horns over and over again to build this wall of sound. Yeah we just record all the parts in order to create that depth of sound.

CYM: Shadowbox is the name of your new album. How did you bring the name of that album to life musically?

Satori: A shadowbox is an environment in which you put fun little funky things. It’s an environment in which you can let your imagination run wild, silhouetting light and dark. The album is the culmination of the past two years. We recorded in Israel, Moscow, San Francisco and New Orleans with different artists and took all these travels and experiences and put them together into a little box.

CYM: You started ten years ago. Did you think your music would blow up like it has? Or did you think with the vision the results would come?

Satori: No it was just an experiment. I’ve been in a bunch of bands before and we were just like banging our heads together touring and not really making it anywhere. So it was a great surprise to us that this would happen and we’re just grateful that we get to keep doing it.