With the season growing colder more and more each day, we decided to compose a list of ten Summer Sizzlers who ignited this summer with stealthy beats and overall killer talent. Handpicked by our contributors from different regions of the States, this list is comprised of musical artists that had an unstoppable summer.

Whether it be festival after festival, endless tour dates around the globe, multiple new releases, groundbreaking sets that will never be forgotten or just down right blood, sweat and hard work, CYM’s Summer Sizzlers are here to help you reminiscence on the last few months of greatness.

Soak up tunes you might’ve missed and get stoked for what fall will bring.

Word to your mother! Vulfpeck have discovered a method of time travel: through their music we are transported back to the late 70’s and 80’s. A full throttle funk phenomenon that has been crushing it all Summer…from playing Red Rocks opening for Medeski, Martin & Wood and The Motet, to selling out The Boulder Theater and a three night run in NY, these guys are on fire. Playing festivals all over the US, Vulfpeck not only makes you question what decade we are in, but they revive the funk that is alive deep in each of us…a downright funkspiracy. The release of Thrill of the Arts last year has sent Vulf on a non-stop tour playing major music festivals and sold out shows all over and their music is equally loved internationally, with 3 nights at UK’s sold out Brooklyn Bowl next September 15th-17th. Founded in 2011, Joe Dart, Theo Katzman, Jack Stratton and Woody Goss are the brains behind this genius operation hailing from Ann Arbor, Michigan. Good thing these cats came along because this quartet is just the dose of medicine funk fans have been craving.

X&G, the combined forces of producers Christian Williams and Aaron Spasiano, first made their debut appearance in late 2015 after meeting in the Salt Lake City music scene. Those seeking a new palette in the world of bass needn’t look further – together, X&G are re-defining the experimental trap sound and are absolutely crushing while doing it. The duo have come at a crucial time in music – while some artists seem to relish in bland soundscapes, X&G have ripped the monotony beneath our feet to leave us intoxicated with their unique coalition of deep bass, jungle and hip-hop synths. After being endorsed by taste makers of the scene such as Josh Pan and Skrillex, you better fucking believe these guys are worthy of keeping your eye on. With so many bedroom producers coming out of the woodwork, this duo truly are gold. We had the pleasure of catching them for the first time at What the Festival back in June, and they’ve continued to keep our attention since. Join us at Symbiosis Festival in California for their next gig, followed by Lights All Night in Dallas for New Year’s Eve. 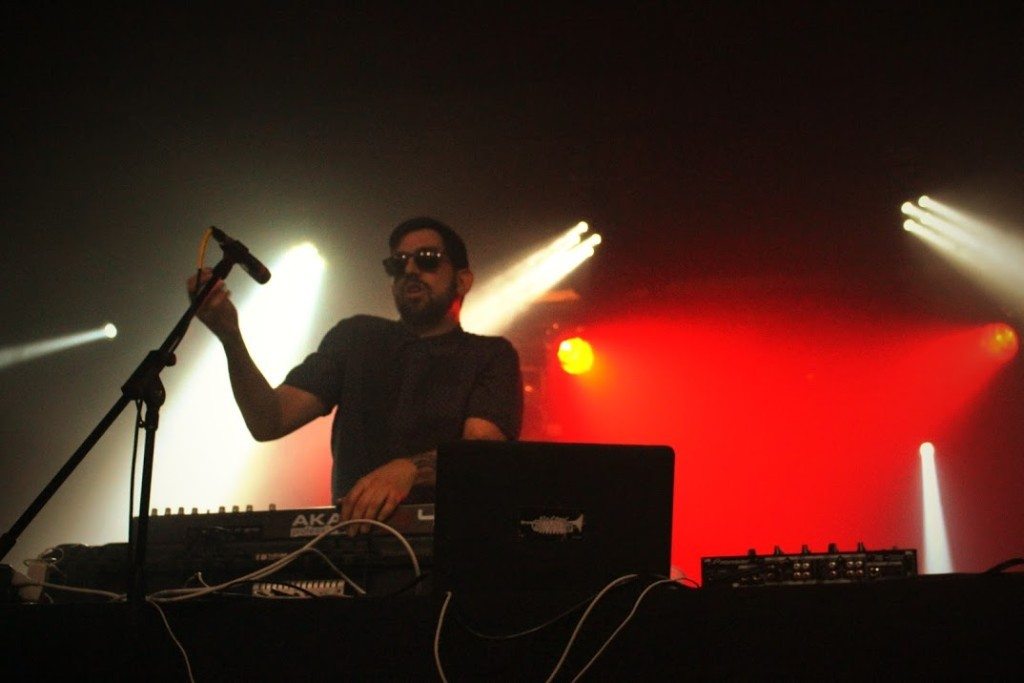 The man with a plan, Russ Liquid, has been pouring his heart into music since he began producing in 2013. The horn aficionado has literally been everywhere in 2016, from the summer’s biggest festivals like Electric Forest and Shambhala to headlining his own shows in between, all the while maintaining his effortlessly soulful style. The latest from the extraterrestrial producer is his live band project, The Russ Liquid Test, which has brought his modern funk style to another level. The lineup features Lowtemp guitarist Andrew Block and drummer AJ Hall with Russell conducting at the center of the orchestral madness. Regardless of how many times you’ve seen him live, Russ Liquid excels more than most when it comes to serving up freshness, and his liquid funk has only been perfected over the years. To say he’s one of our favorite artists out there is putting it lightly – Russ is one of the most down to earth, uniquely strange bass loving producers on the scene, and we truly see no limit for his successes. Heading to Red Rocks Amphitheater on October 8th with funk-mates The Floozies, Michal Menert and Sunsquabi, we’ve already got our dancing shoes on. Tickets are still available at this link!

SunSquabi are a Boulder based group of friends that coined the hydro-funk sound, and they’ve been spreading it to the masses since 2013! Andrew Clymer, Kevin Donohue, and Chris Anderson have dominated nearly every stage there is to slay in CO, and it’s safe to say they’ve conquered the rest of the country as well by being one of the heaviest touring bands on the scene today. After rolling out their debut EP Odyssey on GRiZ’s All Good Records earlier this year, this trio have kicked it into high gear and continue to blow minds and make new fans with every set. 2016 has been nonstop and they only plan to serve it up harder. The boys have officially hit the road for their fall Odyssey tour, taking them to 11 states in 6 weeks with a HUGE Red Rocks show lined up October 8th supporting The Floozies and Michal Menert. We can’t wait to see the guys back in their hometown rocking such a proper lineup. All aboard the Squabtrain!

The 24 year old producer/DJ known as Smokestax has been relentless when it comes to beat making. With a background as a drummer who performed in a number of punk bands as well as marching band, his beats provide a tasteful display of drum patterns which become the overpowering drive of his productions. Expect experimental vocals over deep sub-bass frequencies opposed to hearing a melody – a perfect blend of glitch, trap and bass with an overall touch of outer space weirdness make this Long Island, NY producer one of our favorites. Smokestax’s efforts over the last year have landed him 2 recent releases, including a full EP, on Spankalicious’ Cincinnati based record label, ThazDope Records, and also secured him a plethora of spots to perform at festivals and shows across the nation. This summer Smokestax hit Farm Fest Music & Arts Festival in New Jersey as well as Backwoods Music Festival in Oklahoma, in addition to sharing the stage with artists like Yheti, Toadface, Digital Ethos, Levitation Jones & Subset. Don’t burn out before digging into this artist. Check out his Soundcloud & Facebook for new music and previews, upcoming performances, and dope skateboarding clips. 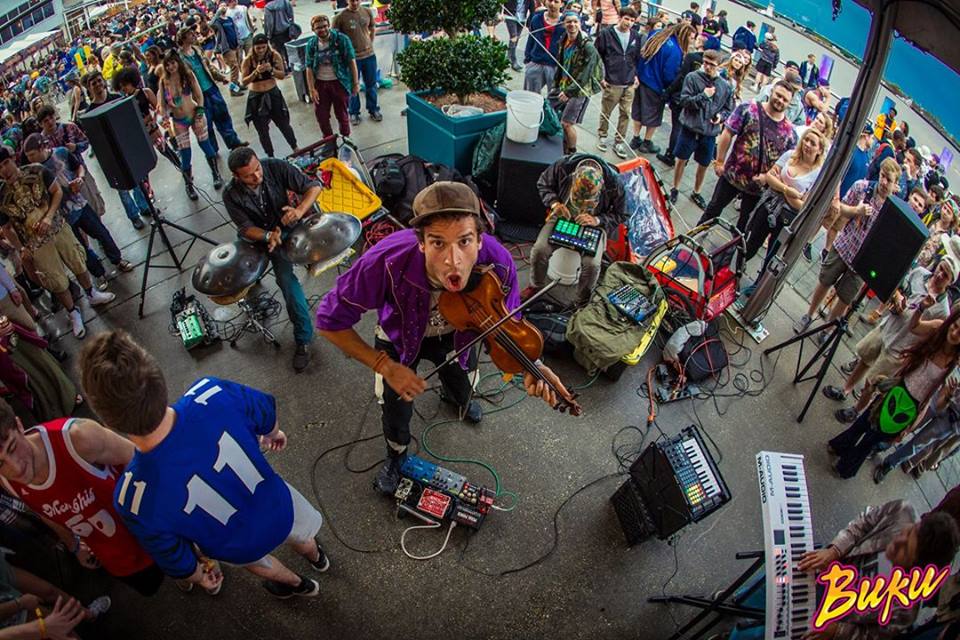 New Thousand is one of the newest live electronic acts to the scene, and has already been creating waves this past summer. The Ohio -> New Orleans based trio describe themselves as a hip-hop/trap jam band featuring violin, hang drum, keys/synth, and electronic percussion. The trio consists of violinist, Adrian Jusdanis, electronic percussionist, Alex Koltun, and keyboard/synth player, Max Jones. Frequent collaborators to the group include Shlomo Calvo on the hang drum, and Ray Wimley as emcee. Together, these guys put on a mind blowing performance and never cease to amaze the streets of New Orleans, instantly drawing in crowds with every performance. The trio quickly proved what they were made of and shortly found themselves playing gigs across the nation, including Buku Music & Arts Project as well as South By South West. Adrian, a true master of his craft, is hands down one of the most badass and creative violinists out there. The energy he brings to live performances is next level. With an electric violin hooked into a guitar FX pedal, you’d be amazed at the sounds this guy can produce; both playing and whistling. His guitar FX pedal transforms the sweet sounds of violin into face melting guitar riffs, all while Alex hammers away on the drum pad supplying a steady backbeat and heavy 808s. Picture a Beats Antique featuring Emancipator esque show with a dirty hip-hop and trap feel thrown in and you’ve got New Thousand. SoundCloud

Maddy O’Neal is the perfect representation of how soulful and funky Colorado truly is. After launching her debut solo project earlier this year, the good things continue coming for the electro-soul producer, and it’s no wondering why. Though she had previously been working under Krooked Drivers as a duo, once O’Neal took a separate path it became more evident than ever of the talent she brought to the table. It was only a matter of weeks before O’Neal hit the ground running selling out Denver’s beloved Cervantes’ Masterpiece Ballroom and announced her performance as part of the epically stacked bill for Pretty Lights’ Red Rocks show. It’s been just over a month since her debut EP, Introspect, began making the circuits, and it’s clear to see that every crowd she rocks is loving it just as much as we are. After Making the decision to march to the beat of your own drum can be daunting for some, but O’Neal is proof that anyone looking for a new start can be met with blindingly bright horizons. Keep an eye out for future news, updates, and tour announcements for O’Neal on CYM. SoundCloud 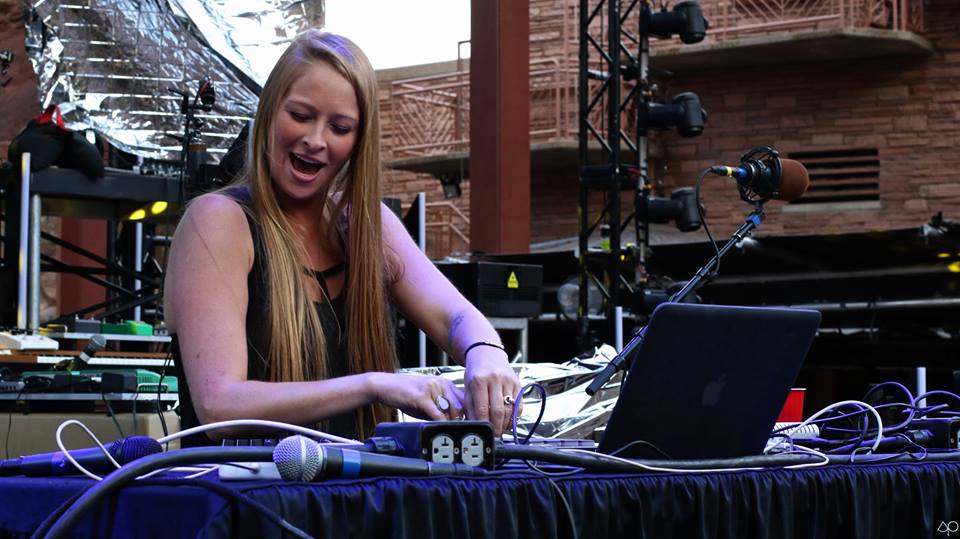 Wax Future have proven that they are nothing but a non-stop party. Their funky electro-soul grooves and tasty guitar licks, all placed over old school hip-hop beats, are one of a kind. With a trio composed of DJ/producer/bassist, Connor Hansell, guitarist, Keith Wadsworth, and VJ, Jamal Raab, Wax Future creates a fully immersive experience taking over your eyes and ears. Their dedication to the craft landed them a spot on Funkadelphia Records and Adapted Records, and lined up quite a heavy stream of gigs to follow, including festivals like Great North, Farmfest, and Luna Light, as well as opening slots for major artists such as Pretty Lights, Big Gigantic, and Freddy Todd. Wax Future are supplying some of the most creative sounds out there today, and we urge you to check them out in a city near you soon. Their next EP, Make Me Feel Again, will be released October 3rd on Adapted Records.

Templo a.k.a. Liam Shea is a melodic vibrations master from Denver whose sound resonates in the downtempo and trip-hop frequencies. Gaining his inspiration from influences like Tipper, Random Rab and Kayla Scintilla, Templo’s sound teleports his listeners directly to bass space. Templo has been on the fast track for the last year and more specifically this Summer, constantly releasing new music for our eager ears to feast on. Every two weeks since July 19th, Templo has been dropping 7 track EPs, with the latest Reflecto released August 30th (all available for FREE download as well). Each weaves its own mysterious story through drippy bass hits and oozing melodic vibes. With that much new material released in such a short time, we cannot wait to catch Shea perform live at one of his three Colorado shows coming up this month. Recently joining the Re:Evolution family, we can only expect more fire flowing from Templo in the coming months.

Dreamer’s Delight has captivated our senses from the very start, and with great reason. This rising young producer hit the festival scene with such avidity that we had no choice but to fall in love with his uplifting ambient productions, and it seems we’re not alone. Reed Krafft’s meticulous productions create an awe-inspiring and introspective. His debut release, Awake, has hit over 1K plays on SoundCloud and is now sitting on Lowtemp along artists such as Gibbz, The Geek x VRV, Exmag and label founder Gramatik. His latest release of ‘Lucid Anatomy’ has skyrocketed DD into uncharted realms and his roll ain’t stopping anytime soon. Playing FOUR sets at the inaugural Vertex Festival last month in Colorado gave us multiple doses of Delight and we can only hope for more opportunities to see Reed do his thang in the next few months. SoundCloud 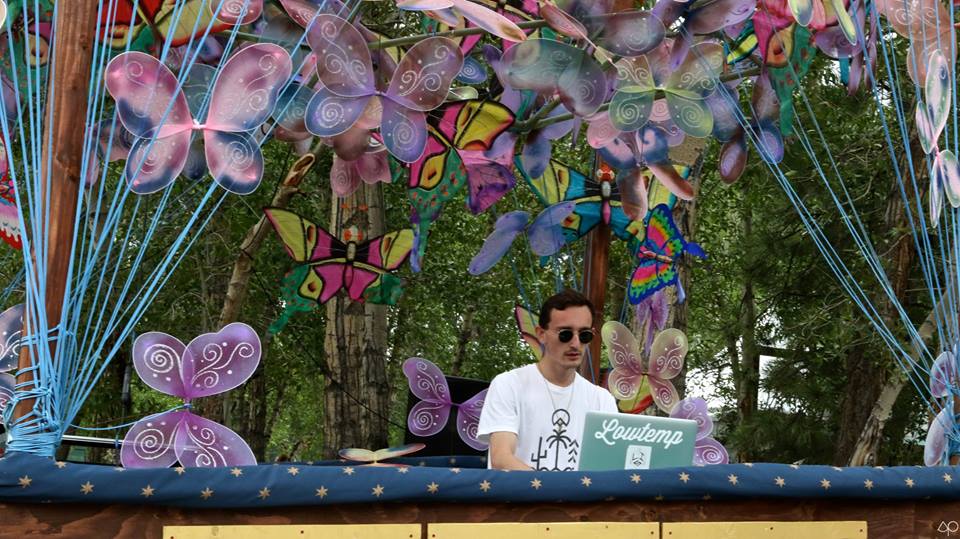