We had the incredible opportunity to sit down with one of hip-hop’s most prolific MCs, Chali 2na during our time at Sonic Bloom this year. In addition to being one of the most humble and unique souls we’ve had the pleasure of talking to, his passion and work ethic to consistently create are powerfully inspiring! Read on as we sesh about his new art book, his favorite artists,  and how he became connected with the Funk Hunters in the first place.

CYM: Tell us a little bit about the coffee table book, ‘Against The Current’, you have in the works. I’m sure there are a lot of fans who were surprised when you announced your book. What was the motivation behind putting it out?

CHALI 2NA: Well I wanted to do the coffee table book simply because a lot of people didn’t even know I painted – and to me, that’s crucial, because painting is what got me into hip-hop. It’s as simple as that. I wouldn’t even know hip hop if it weren’t for a dude named Dave Three who moved into my neighborhood in the Bronx, back in the 80’s, maybe ’79.

He got me interested in art through the graffiti world. It was like I was married to the visual aspect of the art – straight committed. My whole mission. My mom would always tell me ‘Boy, you knew what you wanted to do as soon as you came out!’ because I was always doodling. I never strayed. I was always like ‘I’m gonna be a commercial artist when I get older!’ It was one of my biggest things, you know. So like I said, I was married to that. But I had a mistress you know, and her name was rap. So like writing poetry, when I actually started to get into it, I did it for fun and recreation, and circumstances just led me to where I am today. So my mistress became the most important part of it all. So now, I have all this time on my hands when I come home from tour and in between projects, I just paint. And because of that, I’ve accumulated a lot of paintings, and I was like ‘You know what, fuck it – I need to show this to the world’ and after my first art exhibition, it really just gave me the fever to pursue it.

CYM: Usually I feel like music goes into art, but I’ve never heard of someone being so inspired by the visual aspect that they have to translate it another way. What types of your art will we find in the book?

CHALI 2NA: A lot of my oil paintings, and you can flip through my old sketchbooks too; a lot of my old graffiti paintings, all in chronological order. Then you’ve got photographs, because that’s the latest medium I’ve really gotten into. I have a son, and even though he’s grown older, throughout my career I always wanted to preserve these little moments, so that was the main reason behind that. Right now we’re doing the publishing process for the book, it’s so different to me than releasing an album so it’s been one of the hardest things I’ve ever done. But I’m hoping for November – if not, the latest will hopefully be January or February. 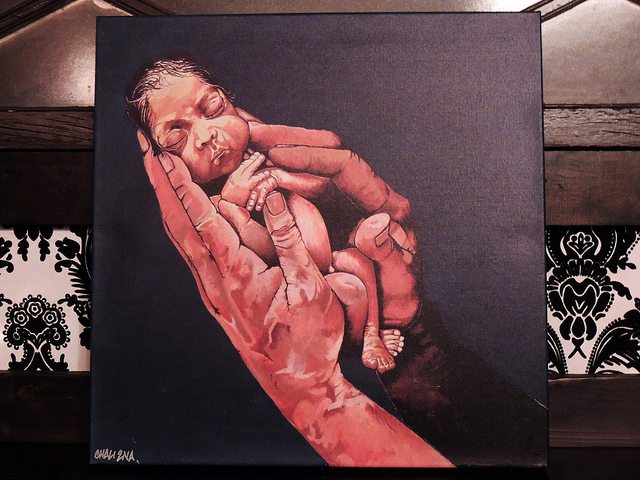 A Chali 2na paining on display in an earlier exhibit. Via Official Website

CYM:  You’ve worked with a ton of different artists, but if you could collaborate with anyone dead or alive who would it be?

CHALI 2NA: Alive, I’d want to do a song with Stevie Wonder. I’ve been in situations where I’m at arms reach, but I’ve never had a chance to talk to him in that perspective. It started back in highschool, you ever heard of Young MC? You know, ‘Just Bust A Move’? Well her name is Crystal, and I actually used to babysit her daughter Tiffany. But I used to watch her when she was like two years old. Tiffany’s father is Stevie Wonder’s nephew. So there’d be times when I had to drop the baby off at the house, and I’d be like ‘That’s fucking Stevie Wonder right there!’ So later, you know I’ve been able to do songs with people like Stephen Marley, Damien Marley – and there’s been situations where I’ve been around him. Like one time I was around Steve, Stevie Wonder fuckin’ shows up, and climbs onstage with them and jams out. I was just in the midst of the conversations, and I was just thinking how it was some shit I was thinking about straight out of high school. So Stevie is definitely high on my list. Another person I’d love to do a song with would be D’Angelo, I’d love to do a song with that dude. That fucker’s amazing. Dead, Bob Marley, Janis Joplin. I’d love to do a song with her, her voice was just amazing.

CYM: Colorado is lucky to get a ton of Chali shows, so you must love visiting here! When you have free time, is there anything you like to do in particular?

CHALI 2NA: I smoke a loooooot of weed – Just being real honest with ya! [Laughs]

CYM: Of course – We’re blessed to have those privileges here! Favorite strain?

CHALI 2NA: For me it’s always been Kush. But I like to mix ‘em, a heady Sativa with some strong ass Kush. That way I’m high, but I’m still working. I don’t like fucking with anything that shuts me off – I don’t fuck with dabs, either – That’s young man weed.

CYM: How did you get hooked up with the Funk Hunters?

CHALI 2NA: Well, I was in rehab with Dunks – [waits for our reactions, laughs] Got you on that! Nah but really, my manager became their booking agent through a series of weird events, and Nick and Dunks came up wanting to do a remix, but wanted to do the lyrics live. I didn’t really know who they were, and I was in the midst of doing a project so I wasn’t really paying it mind. So to get my attention, they took one of my songs, ‘Lock Shit Down’, took the vocals from it and made the song ‘Do This For You’, and then sent it to me. It was a straight up reference. That shit went hard, it was just so dope. So we just came together over it. Rehearsed and realized how much in common we had.

This tour has been amazing. I’ve been doing this professionally for like 22 years. That being said, I’ve been on tours where I’ve been like ‘Damn I cant wait to get off this tour, this motherfucker – and then I have tours where I just don’t want it to end because these people are so amazing, and that’s these dudes right here. There’s a saying I’ve always admired, ‘Foolish is the student who don’t surpass the master.’ Because you know, like I can be a master of something, I get all this love for what I do, from these younger cats, and then I do something with these guys and get to be around them and watch how these motherfuckers work ethic is AMAZING. It makes me go, ‘I need to step my shit up!’ I get inspired when people are hard workers and you can see the fruits of their labors instantly. That’s how these guys are, they’ve got some great karma.

CYM: You’ve got some upcoming dates, some with both Jurassic 5 and The Funk Hunters. You’re gonna be in Colorado quite a bit!

CHALI 2NA: Yeah, two nights at Ogden, and we’ll also be at the Mishawaka Theater.

CYM: Still haven’t made it to the Mish, but I’ve heard great things.

CHALI 2NA: Yo that place is beautiful. Please come. This is what’s dope about it, let’s say the stage is here [motions with his hands], there’s just a big ass river going right through it. You look around wondering where the fuck you are, it’s like paradise.

CYM: We can’t wait to catch you there!

Follow the rest of Chali 2na’s tour dates with the Funk Hunters and Jurassic 5 here.