Walking through the hallways of a Dallas high school to drop off a clothing donation, I eavesdropped on a young group of girls who were frantically debating whether they should attend the upcoming Something Wonderful, a single day EDM festival taking place on April 18th at the Cotton Bowl. This would have been my opportunity to clue in on the potential crash and burn of this first-year festival, but the YOLO effect had its way with me and I found myself with a reason to go to the festival when my friends announced he was vacationing to Dallas for this specific event. 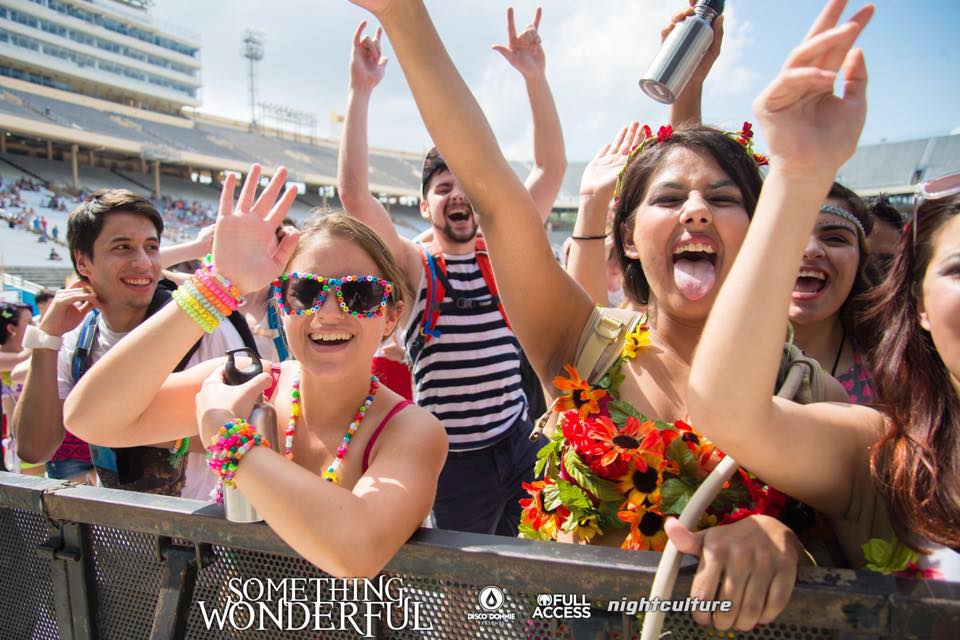 And so we found ourselves on that fateful Saturday, walking for what seemed miles into the Cotton Bowl. Security guards patted us down, drug dogs sniffed out the area around us, and to be honest, the line wasn’t half bad. Upon entering the festival, we immediately realized that this was an “all ages” audience when time and time again, “HEEEEEEY, WE WANT SOME PUUUUUSSAY” was a constant phrase that was reiterated among the ramped up festival goers.

This festival was no different than many other EDM festivals; shirtless men donned indian headdresses, girls outfits varied from neon tutus, to panties and electrical tape covering their nipples, back to the classic fluffies and pacifiers.

Our group waded our way through the sea of P.L.U.R. to investigate the inside of the Cotton Bowl and check out the stage. Much to our dismay, half of the field was VIP and the other half were regular festival goers. I laughed at the idea of people that were tripping and could possibly trip on the stairs as they stammered down to the stadium. The layout of the event seemed poorly planned, and at times, I felt like security was herding sheep. 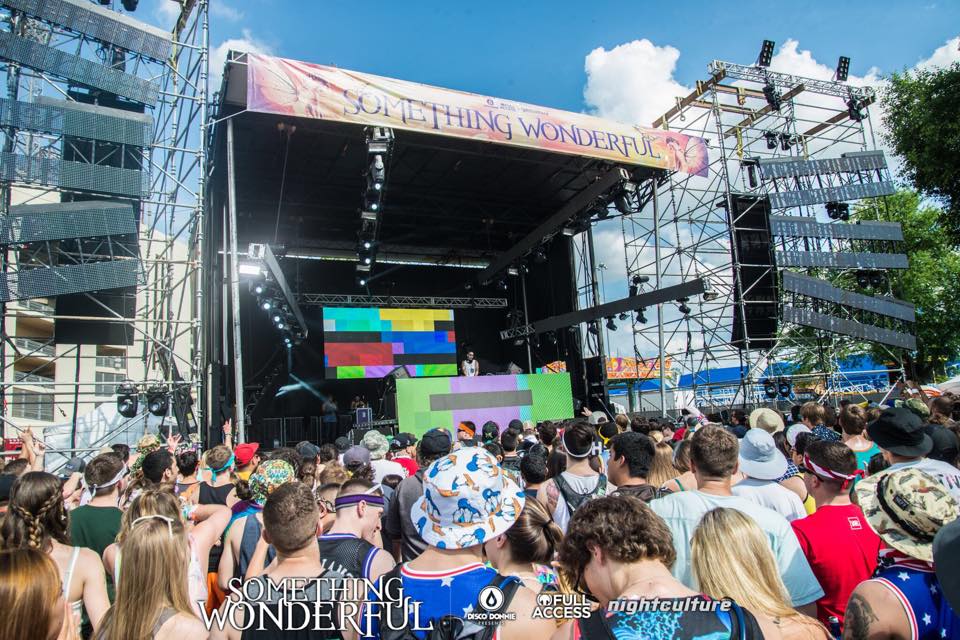 Just as people were beginning to settle into the festival during Brillz set, he announced that Something Wonderful had to make an announcement, and it was then that the weather officially rained our parade; they ordered everyone to shuffle into the stadium and take cover, for severe weather was approaching. The idea of rain and wind was tantalizing at first, but the crowd soon realized that the rain was not going anywhere; watching the multitude of rain drops fall down onto the stadium with backlight mesmerized some of the folks.

As the crowd lowered to a dull roar and the anticipating grew weary that the festival would not return, a shirtless bro swung himself over the barrier, made a mad dash past the security guards, and made a glorious and somewhat triumphant victory lap across the stadium. While the crowd took notice and cheered his effort, a security guard, holding too true to his somewhat mundane oath to keep the wild ravers safe at bay, took it upon himself to chase the wild, shirtless bro that was frantically trying to escape the field back into the stands. And thus, you know where this is going; the security guard slipped to his embarrassment across the ground, and the shirtless bro escaped, to a happier place where huddled crowds of ravers shivered and moaned about the inclement weather and inability to see their favorite artists.

I think at least half of the ticket purchasers would agree that they are hoping for a refund of some sort for the poorly planned, executed, and rained-out event. Although the weather cannot be controlled, the festival was still a dismay to many. The music stopped around 7:00 PM and thus we all lost essentially half of our festival.

Better luck next time; maybe next year it truly will be Something Wonderful. Or at least, Something Decent.