There’s only less than a week to go until the second annual FARM Fest starts, and anticipation for this festival is reaching an all-time high. FARM Fest’s lineup is varied and deep, consisting of such popular headliners as Papadosio and EOTO, choice psychedelic electronica like Desert Dwellers and Bluetech, great local talent like Space Jesus and Esseks, and creative new variations on jamtronica with the likes of Cosby Sweater and Dynohunter along with dozens of others. As you can see, FARM Fest is overloaded with fantastic acts. But as the festival gets closer and closer, all I seem to think about is how awesome Unlimited Aspect live is going to be. 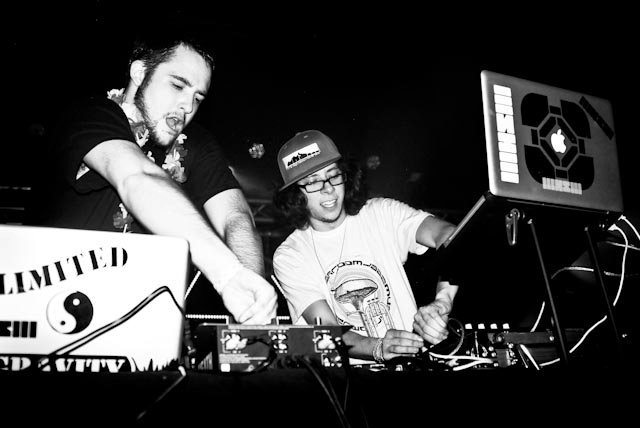 I’ve been a huge fan of Colorado’s Ronnie Weberg, AKA Unlimited Gravity, for a couple of years now, and have been a fan of Project Aspect (Jay Jaramillo) since stumbling across his remix of Space Jam’s theme song last January. But for some reason, I had neglected to really dig into their collaborative effort Unlimited Aspect. A few weeks ago during Sonic Bloom, I caught part of their set and was blown away. The intensity of their performance as a duo was noticeably stronger than when I had seen either of them solo and the addition of the live guitar from Jay, drums from Steve Kuzma, and saxophone provided by Dynohunter’s Clark Smith really makes this act one that needs to be seen to be believed. Hell, I don’t entirely trust my memory after how hard the group’s version of “Tele Shoes” blew my mind, with the saxophone perfectly overlapping with the already epic bassline, it was a performance to remember for sure. I can’t wait to see these guys throw it down again with all of my friends next week in New Jersey. See you there!