Dwelling from Southern California, these two combine their love and influences from the desert to create universal yoga bass music. Desert Dwellers consists of Amani Friend and Treavor Moontribe; together they are one of the leaders in downtempo music from the United States. 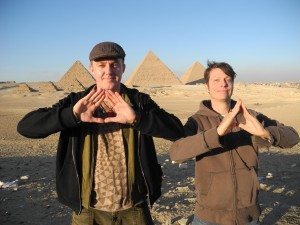 The Desert Dwellers have their roots in the Southern California dance collective known as Moontribe, famous in the electronic underground for organizing dance rituals at magical locations deep within the vast expanses of SoCal and New Mexico deserts. Only just finishing up a US tour with Twisted Records artist Shpongle, Desert Dwellers have been making appearances all over the music festival circuit this year, now having Coachella, Sonic Bloom and the upcoming Farm Fest in Vernon New Jesery under their belts.  It’s safe to say that there are zero signs of this stellar duo slowing down, and we wouldn’t have it any other way! Skillfully blending deep bass, earthy percussion, ethereal voices and culture-crossing instrumentation into a sonic incense for mind and body, Desert Dwellers offers a spellbinding hybrid with echoes of our tribal past and future.
These two sound alchemists offer cutting edge techniques that blend the modern edge of electronica with the Ancient. Listen below for one of my favorite tunes of theirs:


Be sure to catch Desert Dwellers at Farm Fest through July 24th -26th! In addition to a complete DD set, Treavor Moontribe will be doing a solo set at Farm as well!