Slightly Stoopid is a band that needs no introduction. As one of the most heavily touring groups of our time, the band’s mellow and easy going reggae-ska has allowed them to live a long and fulfilling musical career, stretching nearly twenty years. Their upcoming tour, Summer Sessions, features the band alongside hip hop legends Cypress Hill, American punk rockers NOFX, reggae performer Stephen Marley, and longtime friends/collaborators G Love and the Special Sauce. We were stoked to have the chance to sit down with Rymo, drummer for Slightly Stoopid, just before their set went down on the last day of the Suburbia Music Festival in Plano, making it a very Sunday Funday indeed.

CYM: You’ve all been friends for a very long time. How far back does it stretch?

Miles and Kyle have known each other since they were like kids, and they initially started the band. They grew up playing music since they were basically knee high. It’s nuts. Most of us came along later; I’ve been with the band for 11 years.

Does the songwriting process ever go through a revamp now and again? How do you continually keep your style so fresh?

Yeah definitely, sometimes we wanna keep playing a song, and you just wanna mash it up sometimes. Actually, we’re doing a song today that used to have a different rhythm behind it, it’s the same lyrics, but over a different reggae rhythm. So we do that quite frequently, we find a song the guys like to sing and re-work a rhythm underneath it to kinda give it a new life.

Is it true there’s a vault of unreleased Stoopid and Bradley tracks? If so, what are you waiting for?

To my knowledge, there aren’t, but I’m sure there might be a couple jams, mainly because Kyle and Miles were good friends with Brad back in the day. They first met him and Miguel, the sound engineer for Sublime, and they started producing their records.

CYM: Slightly Stoopid has always been a very heavily touring band, and your tours are always stacked with artists from different backgrounds that make up the SS sound; hip hop, jazz, reggae, punk, etc. At this point, it kind of seems like you pretty much plan your own tours, or at least have a good hand in setting them up. Is that the deal or do you just have an awesome tour manager?

It’s a lot of things. Bands we grew up listening to, like everybody grew up listening to Snoop Dogg, and NOFX and the Marley’s – for us, it’s really just kind of a blessing being able to tour with those bands now, and be friends with them and kind of hang out on an even playing field. When you’re touring and you’re in the same city, and everyone’s kinda getting to the next place, it’s a lot of work. It’s tiring. A lot of movement. So to be with those kind of bands is a lot of fun, we looked up to most of those acts so it’s nice for us.

CYM: Out of all the awesome moments you’ve experienced collectively in your Stoopid’ career, which moment stands out most?

There’s honestly been so many….

CYM: Being invited by Bob Weir to record live must’ve been amazing.

That was definitely a high point. That was huge for us. I grew up a fan of the Dead, and on top of that, we actually filmed that in my hometown, so the whole experience was kind of a double meaning for me, just because of that, and I saw some friends and family members, and then we were there to work with Bob, who you know, and he’s a guitar legend. I don’t try to like, think about just one high point, I mean we’ve had a lot of high points, where we’ve worked with artists that have been such a big influence. Those are really to me the most important things. It’s not really about money or publicity, as much as it is about like becoming peers with our idols. We’re almost on a level now where you give respect, you get respect also, because a lot of those guys have told us, ‘You guys sound good, and I remember when you guys were kids and now, 20 years later you’re still doing this.’ So that feels really good, just having that staying power with the bands we grew up listening to.

CYM: What do you see Slightly Stoopid doing in the next 20 years? Do you guys have any plans outside of music?

Touring probably, putting music out. I’d love to, we’re open to other opportunities like film, TV etc, but really we just love to play. We’re musicians. One of the things I like about the band is that we don’t wear costumes, or put makeup on or do anything weird, the way we’re dressed now is how we’re gonna play the show later, and its just more about putting good music out for the fans. If we’re able to do that for 20 more years absolutely but we’re definitely open to other opportunities. 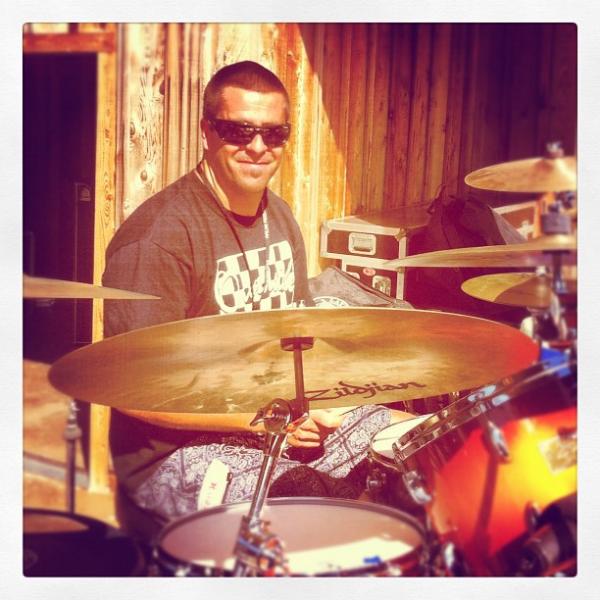 The grassy knoll, that was pretty cool. Just from seeing it on TV as a kid and then being there in person was pretty interesting. It’s kind of notorious, but it’s cool.

CYM: Any special pre-show workouts to get lively?

Normally yeah, like if we had our space and stuff, a lot of us work out during the day. But mostly we just toss a few drinks back and go play.

CYM: If you could write a note to your younger self, what would you say using only two words?

CYM: If you could kidnap any artist for a collaboration, who would it be and why?

That’s the hardest question ever! There’s like 40 people on that list. I’ll come back to that one…

CYM: If you were Oprah and could give away anything to your audience, what would it be?

I’d hand out my drums. I’m endorsed by Pearl, so I’d give them my whole set-up.

CYM: Now back to kidnapping artists…

I’m a huge Radiohead fan, so I’d like to kidnap Thom Yorke and work with him.