Taking place in one of north Texas’ most white-bread metropolitan cities, Plano, the inaugural and aptly named Suburbia Music Festival happened this past weekend. Nearly 20,000 people descended upon Oak Point Park & Nature Preserve for the two day long fest, making the trek to see a medley of acts from alternative rock giants Third Eye Blind, to chart topping R&B singer/rapper J. Cole, with even more varied artists in between. To top off the ‘middle of America’ atmosphere, the event was all ages and family friendly, as inflatable basketball hoops and finger painting canvasses were available throughout the site. As with all first time festivals, the kick off day was a trial run for improvements to take place and features to be built upon. But by Sunday night, Suburbia had successfully acted as a great catalyst for what the future of Plano and live music could be together.

Entering the gates on Saturday around 12, the temperature was already sitting at a high of 90, and the lack of trees (the grounds were entirely open, with some areas providing shade, but these were very, very limited) made the idea of seeking shade almost a pointless effort. It wasn’t uncommon to see festival goers shield themselves from the sun’s rays, crouching beneath shadows of vendor booths or setting up blankets under the tiny, balsam firs that spotted the field here and there. By early evening, a single water refill station was put in place, making it easier to keep cool for the remainder of the day.

The layout of the park was very spacious, allowing for a variety of clothing/accessory vendors to set up shop, as well as providing a diverse selection of delicious noms at the food court (even Vegan!). Making sure to have a hold on the grounds, we explored from stage to stage, happy to find that all three were nicely arranged, leaving no room for sound interference, a definite bonus. Local Dallas hip-hop duo A.Dd+ were up early on the Cedar Room stage, starting things off just after 12:30. Their penetrating and thoughtful rhymes put them at a secure spot in the hip-hop scene here, and seeing them in a festival setting rather than a small club for the first time was a truly rewarding experience. Playing at nearly the same time as Third Eye Blind were The Dandy Warhols, who I’ve been dying to catch ever since ‘We Used to Be Friends’ was the theme song for Veronica Mars. 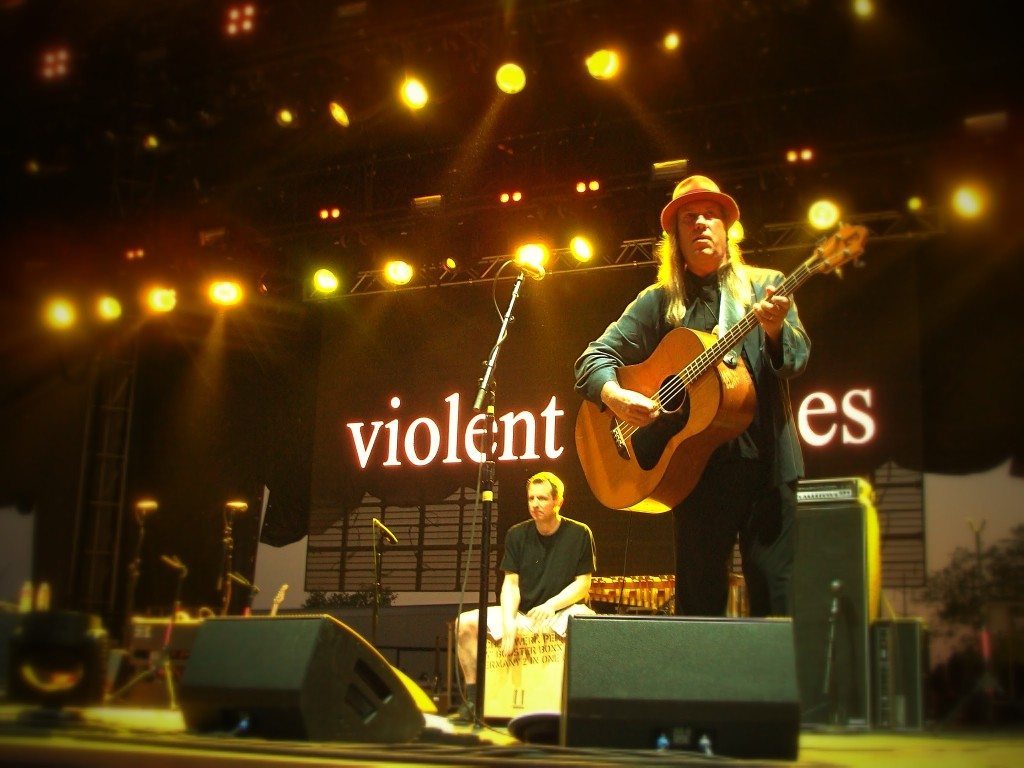 The Violent Femmes, performing on the Meadow stage, Saturday night of the festival. Photo by: Tai C

Catching Third Eye Blind for a few classic songs (‘Jumper’ in particular was all I cared about), we were right up front for the Violent Femmes, who, strangely enough, hit the ground running with ‘Blister in the Sun’ as their first opener. This being their most popular song to date in more than 20 years of music, the band played it with just as much fervor as though it had been penned only the day before. Next up on our agenda was an interview with Big Gigantic, a Colorado based live electronic duo that delivers nothing but euphonious symphonies of jazzy electronic funk, straight to the heart and soul. Dominic Lalli and Jeremy Salken have never been met with anything less than a rowdy audience, pretty much guaranteeing a stellar performance every time they take the stage. Before their set, we were able to grab an interview with the sedulous pair, which will be posted later this week to the site. 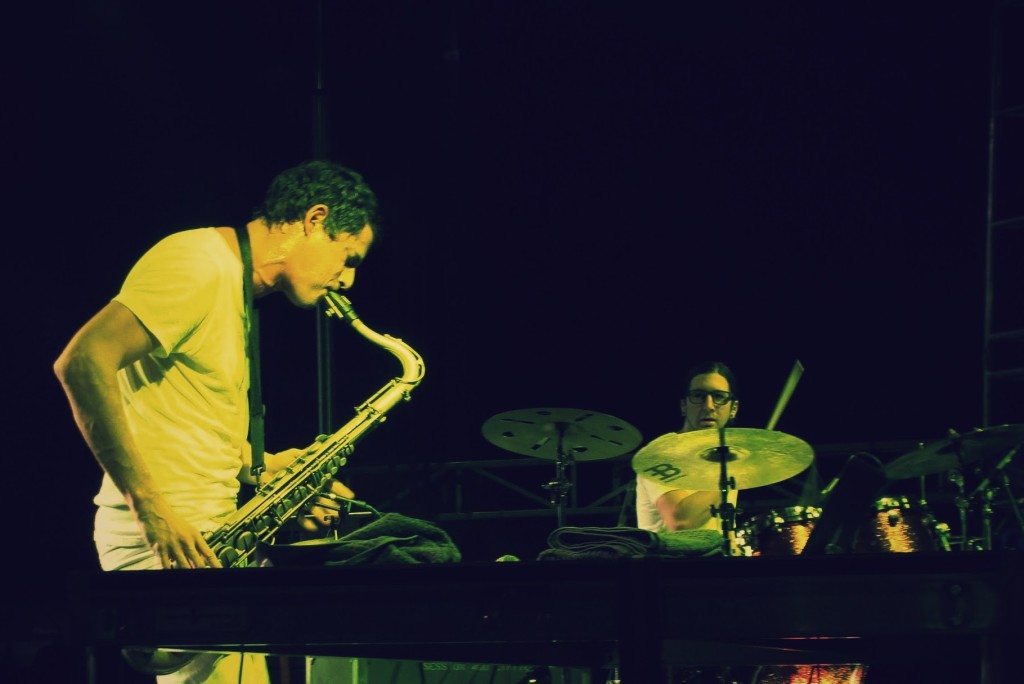 Better prepared and ready for the second day of Suburbia, we arrived just before Smallpools took the stage at 3:15, an insanely infectious pop rock band that totally encompasses everything we crave and love about Summer. After initially seeing them for the first time at BUKU Music + Arts Project back in March, I was surprised to find myself singing along to each song they played, as if I’d been obsessing for weeks. After shopping around vendors, we ended up meeting a couple who had driven 5 1/2 hours from Amarillo to make Twentyone Pilots set that night. Never hearing of them prior, we decided this was the perfect recommendation to go on, and the band did not disappoint: their energy level was through the roof, and the duo somehow made crowd surfing with a drum set happen! (This photo below wasn’t taken at Suburbia, but gives you an awesome idea of what we mean) 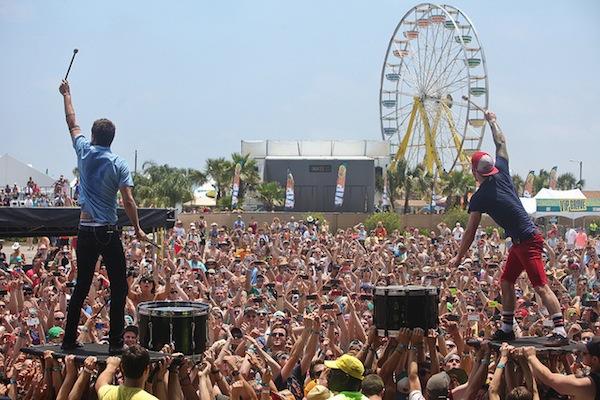 Tyler Joseph and Josh Dun from Twentyone Pilots, performing on top of the crowd at a festival in 2013.

Needing to make our interview by five, we left the set early to meet up with Rymo, from Slightly Stoopid, who were set to play later that night at 6:15. You can read our interview here. Watching the guys perform on the Cedar Room stage only moments later was definitely the pinnacle of my weekend – even after seeing them nearly 10 times already, I still find myself filled with the same excitement I felt when first seeing the group four years ago. Their set list was the perfect balance of songs from a span of their 18 year discography, playing a few fan favorites, including ‘Sweet Honey’, which had the entire crowd singing out in unison. 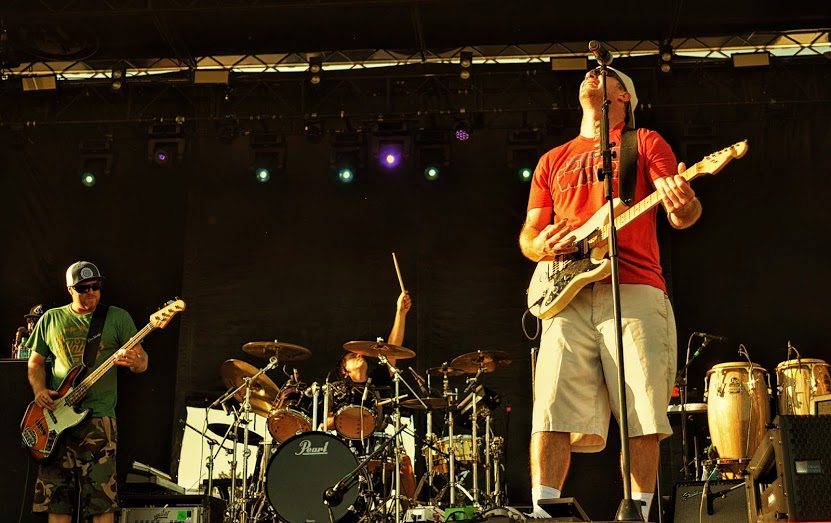 Taking on the Meadow stage at 7pm was J. Cole, an R&B rapper who has been dominating the radio waves the last couple years, most recently with his banger ‘Can’t Get Enough’. Dropping expletives like bombs, it was a little comical watching groups of horrified suburban families herd their children away from the stage, snatching up blankets and umbrellas as if some new disaster were upon us. In that moment, the true irony of Suburbia Music Festival showed its face.

All in all, Suburbia Music Festival was, in truth, a social experiment, and it worked. I can definitely see it being an awesome alternative for much farther music events, and it would be nice to have another festival of this caliber that DFW could call its own. Thank you to Live Nation for allowing CYM to be apart of the very first milestone in what will ultimately be a lengthy timeline in Suburbia’s career.