I’ve been told not to get in cars with strange men my entire life, but I’m also a rebel with “Almost Famous” dreams; therefore, I’ve broken this rule a time or two in the name of live music and journalism. I was particularly glad that I made this rebel move last weekend for a road-trip to New Orleans along with my badass accomplice and editor Tai C, because we got the privilege of meeting Tucker Gumber AKA: “The Festival Guy”, along with many other interesting characters and inspiring souls on the 10-hour trek to The Big Easy for Buku Festival, which happened to be the kick-off of festival season. 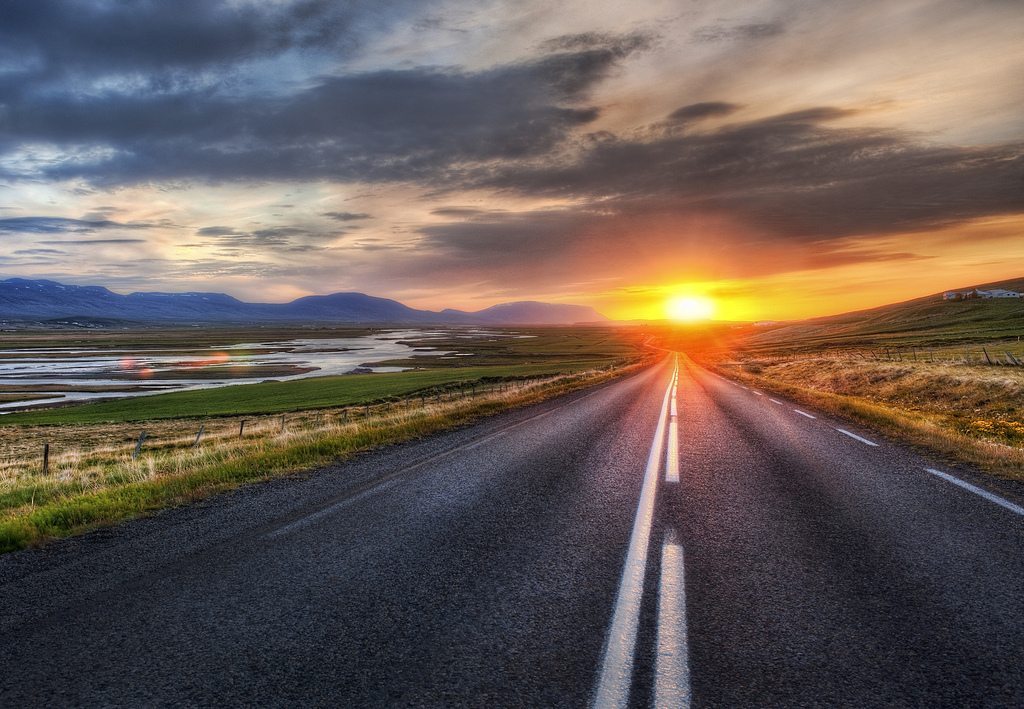 It was after midnight on a Thursday when I arrived to pick up Tucker, a man I had never met prior to this trip, to drive my Mazda overnight from Austin, Texas to New Orleans, Louisiana. Buku was only a two day festival so we decided to drive overnight after I was finished interviewing Luke The Knife in Austin. Although the three of us had a few options of places to crash, there were no set plans, just a car full of music lovers with gypsy souls, hungry for live music and eager to embrace the festival community.This all may sound crazy to some folks, but it wasn’t too far of a stretch from other methods of traveling I’ve arranged in order to get to see some good live music, and it happened to be one of the more memorable experiences I’ve had on a long list of damn crazy adventures.

This particular road trip stands apart from past escapades due to the outstanding amount of synchronicities our trio experienced; those strange happenings began as soon as we arrived to the festival at Mardi Gras World after 10 straight hours of overnight driving. Immediately, people were running up to the uncontrollably charismatic Tucker, all the while exclaiming things like “OMG, the festival guy!” and asking to take photos with him. I began to wonder who the hell Tai and I had come here with, knowing it was obviously someone whom inspired other seasoned festival goers. 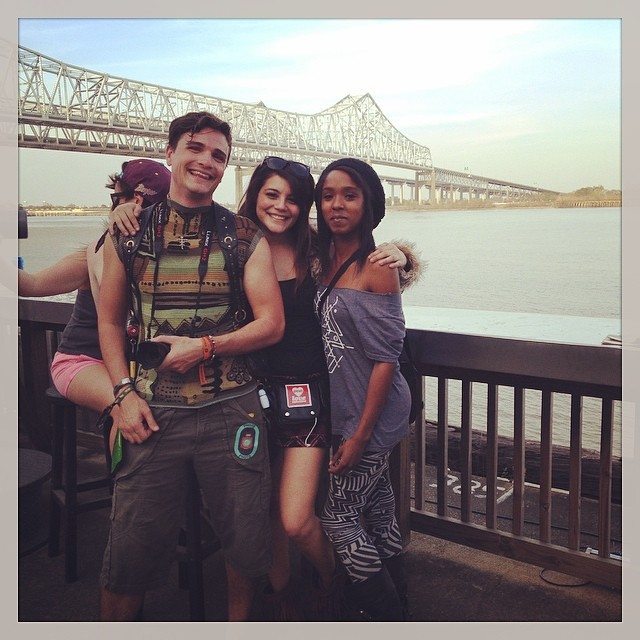 One of these individuals was a Buku volunteer by the name of Gabriel, who immediately made Tucker aware of the fact that his blog had inspired himself to volunteer for festivals across the nation. It was a very sincere compliment that Tucker took to heart, but little did we know that this zealous volunteer would essentially save our night.

Gabriel is another new character in my life’s story; the man is a true inspiration with a servant’s heart of gold and a contagious low-temperament.  He proved this compliment true when a full day and night’s worth of music (from the likes of Bone Thugs, Conspirator, Tourist) came to an end. The three of us sat down in the grass with bellies full of alligator tacos (authentic NOLA eating) and started reaching out to our social media networks.

We had a few leads, but no solid answer, so Tucker eventually said “Fuck it, I’ll get creative” and disappeared off into the crowd.

I knew that I could probably just cave in by reaching into my wallet and paying for a last-minute hotel room as close to Mardi Gras World as possible, but part of the excitement was the challenge of finding a place to stay. It was a live experiment of human resourcefulness and generosity within the festival community. 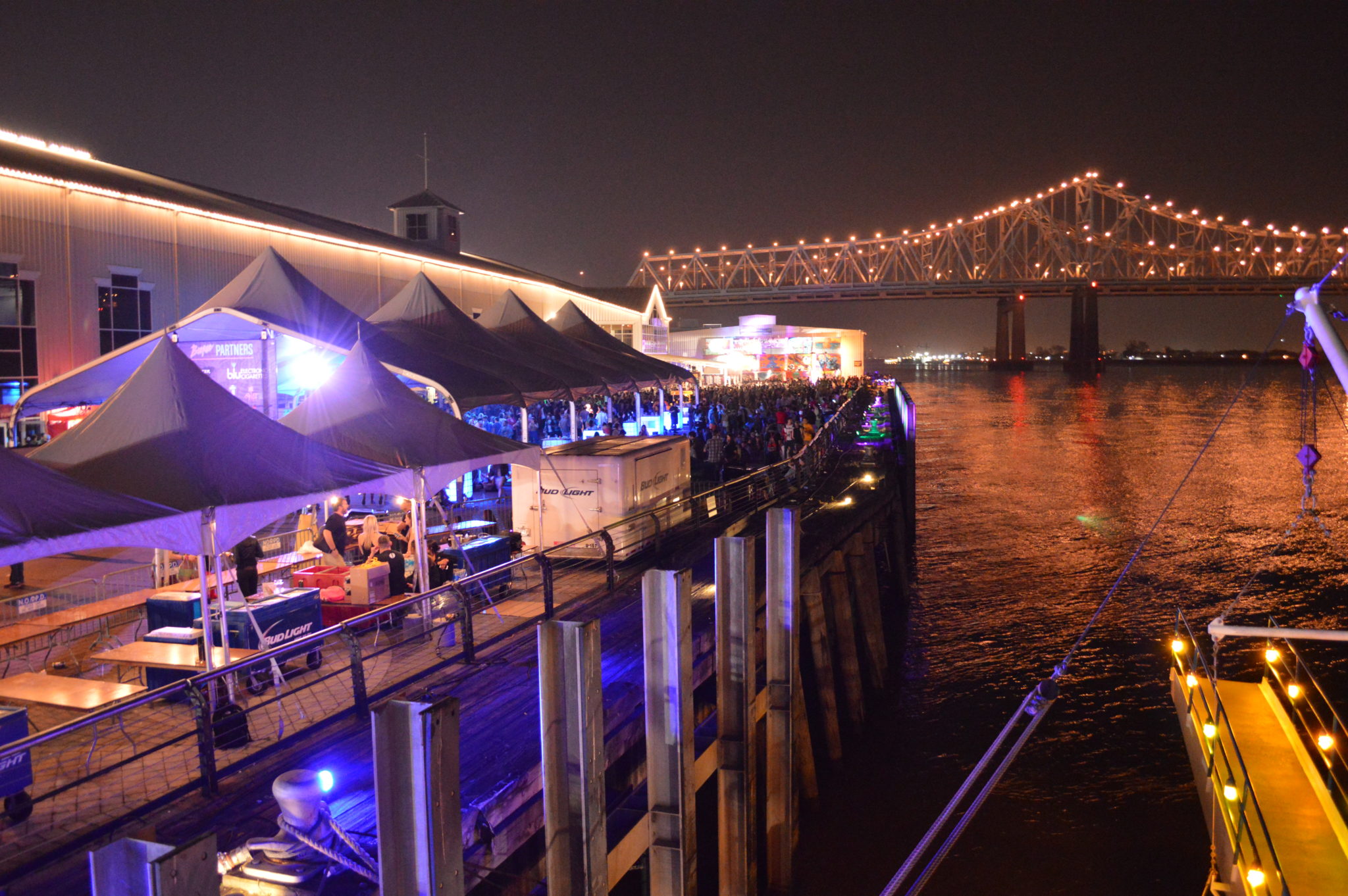 Although I had only known Tucker for less than 24 hours at this point I had faith that he would come back with a plan that included Tai and myself. A 10-hour car ride will really allow you to see the essence of a stranger’s character, and I was assured Tucker was a genuine individual with only good intentions and sheer positivity.

Tucker met us back at the press den just moments later with Gabriel, who by a strange “coincidence” happened to only be able to book a room that had two queen size beds. Gabriel was more than happy to take the three of us in. The sleeping arrangements were very luxurious compared to sleeping in the car, as I thought would be the case for a moment. 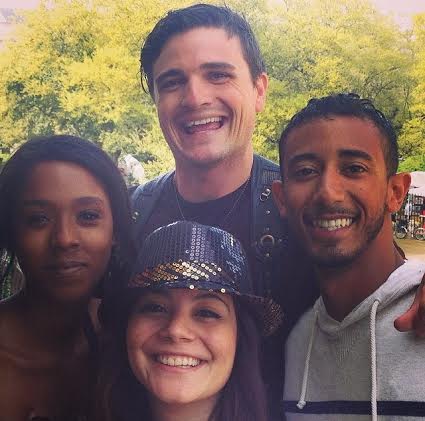 I woke up feeling re-assured of the sheer goodness that exists in the hearts of those within the festival community, only with a mere shadow a disappointment with the fact that we’d slept in past the hotel’s complementary breakfast.  Gabriel had woken up early to go work on festival grounds, and graciously trusted us with a room key so that we could catch up on the sleep that we had missed from our overnight voyage.  The three of us eventually got moving to fill up on fast food, and head back to festival grounds in order to get our buzz on at the press happy hour inside the Treehouse Mansion.

Our trio was enjoying deliciously free vodka sunrises when two of the most badass mutual friends of Tucker and I walked in: Grant Kwiecinski, who happens to be the incredibly talented producer/saxophonist GRiZ, and his strikingly awesome tour manager, Ben Schroeder. If you’re going to have friends in common, it definitely should be that pair, because they are some of the most fun and hospitable guys I’ve met over the years. It were as if the party had walked in all over again. 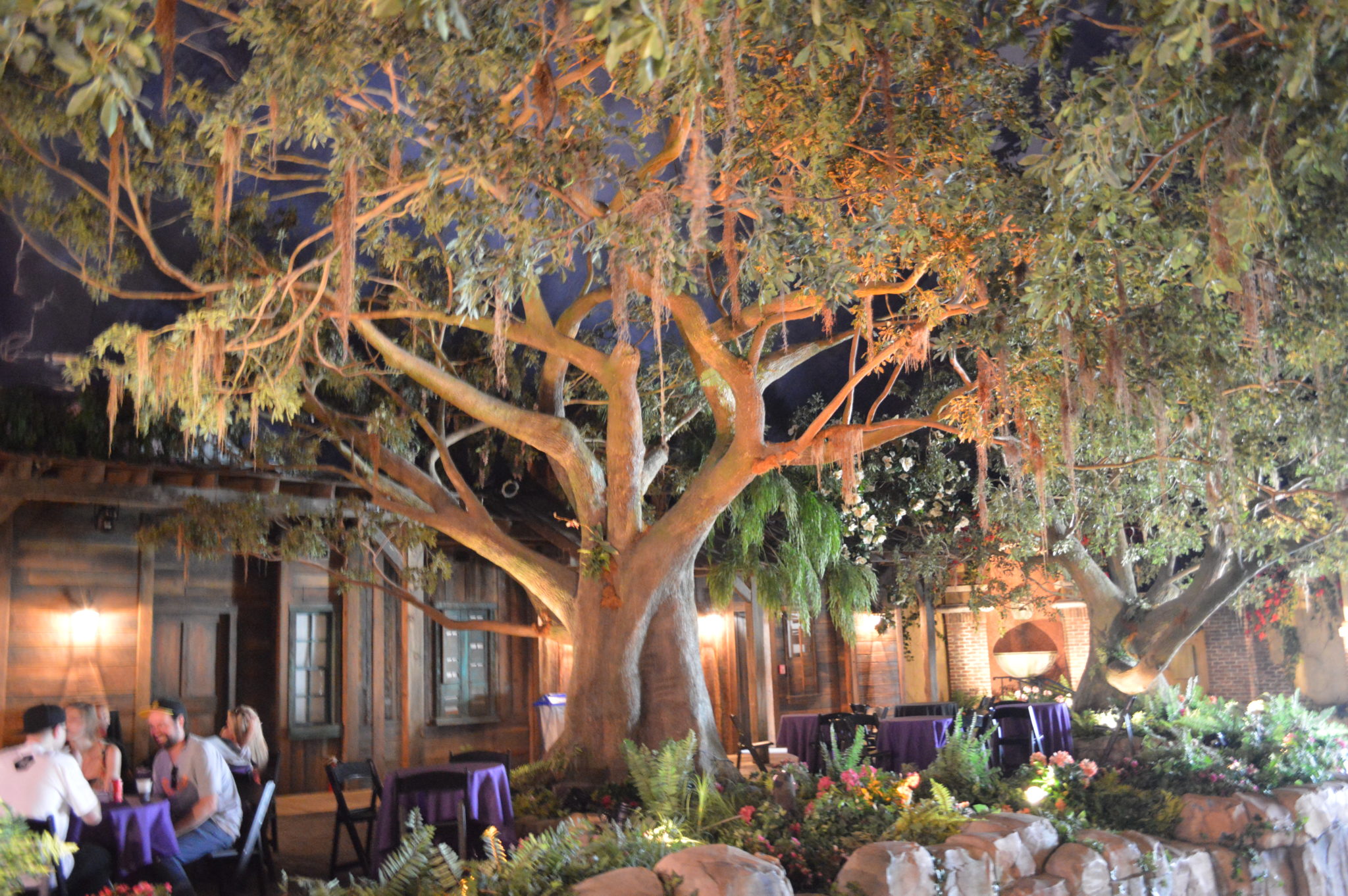 We proceeded to join the guys in the artist trailer for some of that well-known team GRiZ hospitality. Grant disappeared to conduct an interview and prep for his set, and when he came back to the artist trailer, he began doing some light stretching. As a yoga fiend, I’m notorious for using any excuse to bust out yoga moves and for instigating random yoga sessions in the strangest of places; I was pleasantly surprised to learn about Grant’s inner yogi.

Just moments before he took the stage as GRiZ, we had a full-on yoga session outside of the artist trailer. I’ve kicked it with Grant a few times over the years, but had no idea just how disciplined he was in the art of yoga. He completely schooled me in warrior sequences, and fixed my alignment when it was off during our vinyasa flows.

After genuinely impressing my inner yogi, Grant smashed some serious funk on stage. We had the best seat in the house; an onstage viewing of the entire set along with Ben, Tucker, and another new friend, Collin Taylor, a photographer who works under the name Live Edit Labs, who happens to be one of the best in the industry! We spent the rest of the night running around festival grounds with all of Team Griz, catching The Flaming Lips, School Boy Q, The Glitch Mob and too many more to list. 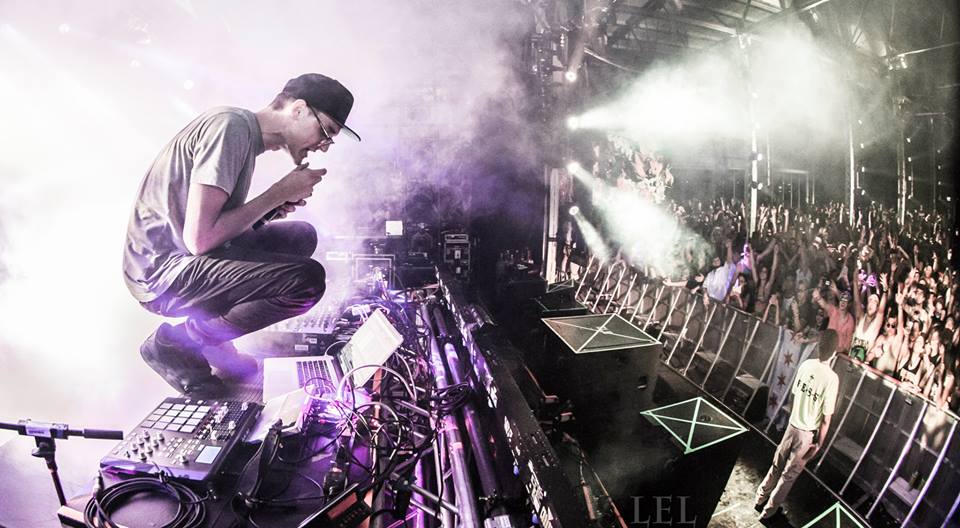 The night ended in a way that made my inner yogi rejoice: Grant and I had a headstand competition. I have to admit that’s the first time I’ve ever seen a six foot man pull off a headstand, and Grant did it with extreme grace. The competition basically ended in a tie, until I busted out my favorite trick: full lotus position while still in headstand. I actually think that was Grant’s first time to try to pull off the move; he did it much smoother than my first attempt. I made Grant pinky-promise he would work on lotus in headstand position, so we could rematch when we next crossed paths. 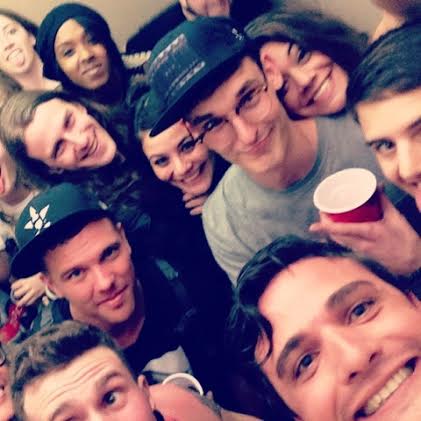 We met up with our favorite volunteer, Gabriel, after he was done with a long day of festival work and he extended the invitation to the three of us to stay at his hotel again. I fell asleep to the sounds of Tai and Tucker advising Gabriel on how to start his own blog, entitled “The Festival Volunteer”, where he would review what its like to travel across the nation and volunteer at different festivals. I’m sincerely looking forward to reading Gabriel’s blog as he grows within the festival community along with us.

It was extremely hard to leave NOLA the next morning, so the three of us went to a house day party that took place in a beautiful New Orleans style french loft right on Bourbon Street, hosted by some of our new friends we met from Team GRiZ. The house had a patio that overlooked the city, and we had an incredible view of Sunday Funday shenanigans taking place in the heart of the Big Easy. An added bonus was the fact that the first friend I had ever made back in first grade, Bobbie Jo, who was now a NoLa resident, met us at the house party for some good ol’ fashioned day drinking before our trio’s departure back to Austin. 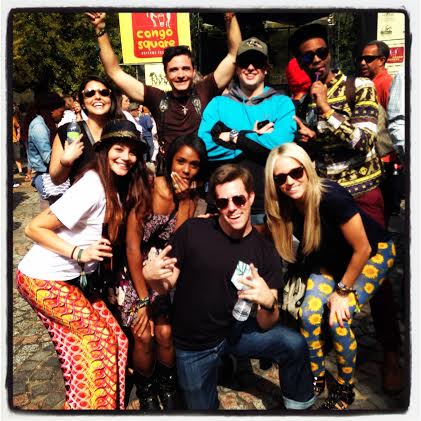 We arrived back in Austin in the wee-hours of Monday morning, with just enough time for me to squeeze in a few hours of shut eye before returning to my full time job as a social worker at a non-profit organization. You know you’ve done a festival right when you find The Festival Guy’s camera battery charger, and Griz’s sax stand in your car the next morning, so I’m sure I did Buku well.

I’m entirely grateful to Buku Fest for providing the right community atmosphere to start festival season at, as well as for the amazing characters that truly created the ideal start to a long season. Tai, being my editor, made it possible for me to even get into Buku, and her work ethic is something I admire the most. Gabriel’s trust and helpfulness gave us a place to stay and I wish to incorporate his servant’s heart into my daily routine. Tucker’s unending positivity and charm kept everyone’s spirits high, and his entrepreneurial spirit inspired us all. Ben and Grant’s hospitality ensured we all had the time of our lives. All of these positive qualities are ones I am currently striving to incorporate into my daily life. I’m looking forward to my path crossing with all of the characters from my Buku life story again, as I know it will.

At the end of the day, I couldn’t be happier with Tai and myself’s decision to let a stranger, The Festival Guy, drive my car in the middle of the night to New Orleans; it pays off to be a rebel sometimes.