New Orleans is a city famous for its rich culture of music, art and spirit; BUKU Music + Arts Project is a cultural celebration held in the Big Easys’ burgeoning Warehouse District that truly captures the heart of Nola’s charm. The festival’s home of Mardi Gras World weaves a unique ambience around the fests’ artistic happenings, as it showcases jaw-dropping Mardi Gras floats and the scenic Mississippi River in the background. From international touring acts representing a plethora of genres, to improv street performances reflecting the essence of the city, BUKU has something for every type of festival-goer’s stimuli. We experienced countless epic moments as the festival immersed our senses in euphonic and aesthetic treats, but we managed to compile a list of our top 10 TOOBUKU moments. 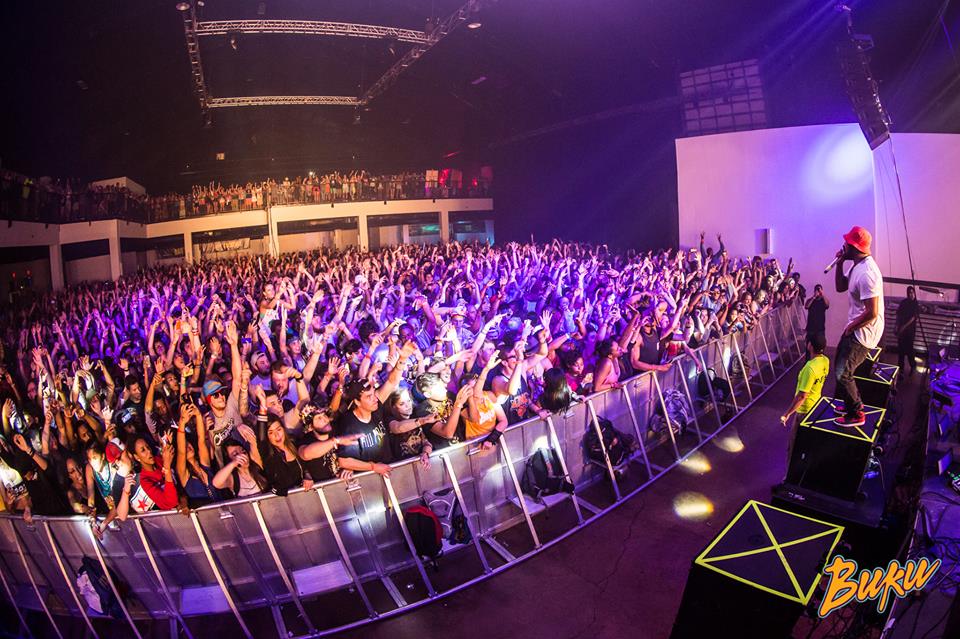 Schoolboy Q in the Ballroom.

10. Schoolboy Q packed the Ball Room – If there was one thing to say about BUKU, it’s that they definitely excelled in the terms of creating a festival melting pot. Saturday’s lineup included heavyweights from all across the genre board, and Schoolboy Q’s powerful hip-hop performance in the Ballroom felt more than fitting. Schoolboy Q’s stage presence was undeniable as he raised the crowds’ boundless energy with each track, finally coming to a boil as he chose his closer, ‘Man of the Year’. Fans followed his every lead as he manically jumped around on stage. 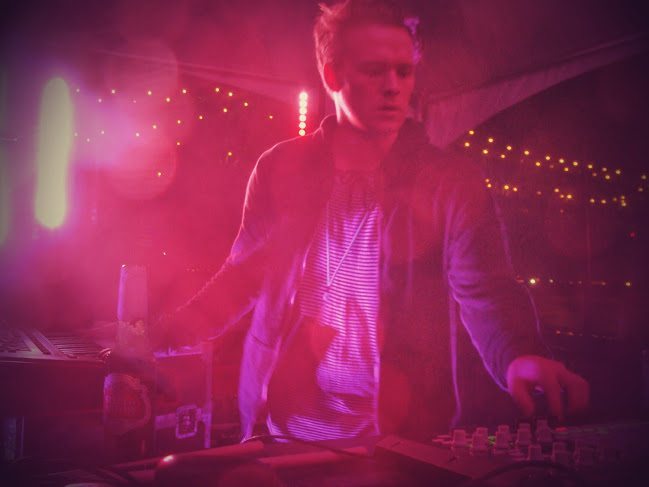 TOURIST playing the Back Alley

9. TOURIST at The Back Alley Stage – William Phillips, also known as TOURIST, brought his soothing electro sound to The Back Alley stage Friday night. The combination of TOURIST’s soulful beats and the stage’s gorgeous background of a lit-up bridge on the Mississippi River created a chill-evoking experience.

8. Zach from Zeds Dead Live Graffiti –Although Zeds Dead took the Float Den stage on the first day of the festival, it was during day two that fans were in for a real surprise. Most attendees passing by the BUKU Graffiti Wall, an open space for artists to create during the festival, were oblivious to one half of the Zeds Dead producer team Zach, aka Hooks, working on a spray paint canvas of his own. Luckily, we were tipped off by an awesome volunteer to take in this spontaneous BUKU moment!

Zach, aka Hooks, from Zeds Dead.

7. Bone Thugs Reunion – Nothing brings out a music lover’s inner OG quite like a Bone Thugs-N-Harmony performance, and that feat was clearly exhibited at their Friday evening performance. Bone Thugs brought all of their golden classics to The Power Plant Stage, while the entire packed crowd sang along to “First of the Month”, “Thuggish Ruggish Bone”, “Crossroads” and many others for the entire hour. Multiple tributes to legends EAZY-E, Biggie, and Tupac were made as well. A particularly special moment was the on-stage presence of Flesh-N-Bone, a Bone Thugs member who had been mostly incarcerated throughout the majority of the rap group’s touring career. The vibes were definitely high as longtime fans happily rejoiced during the solid reunion. 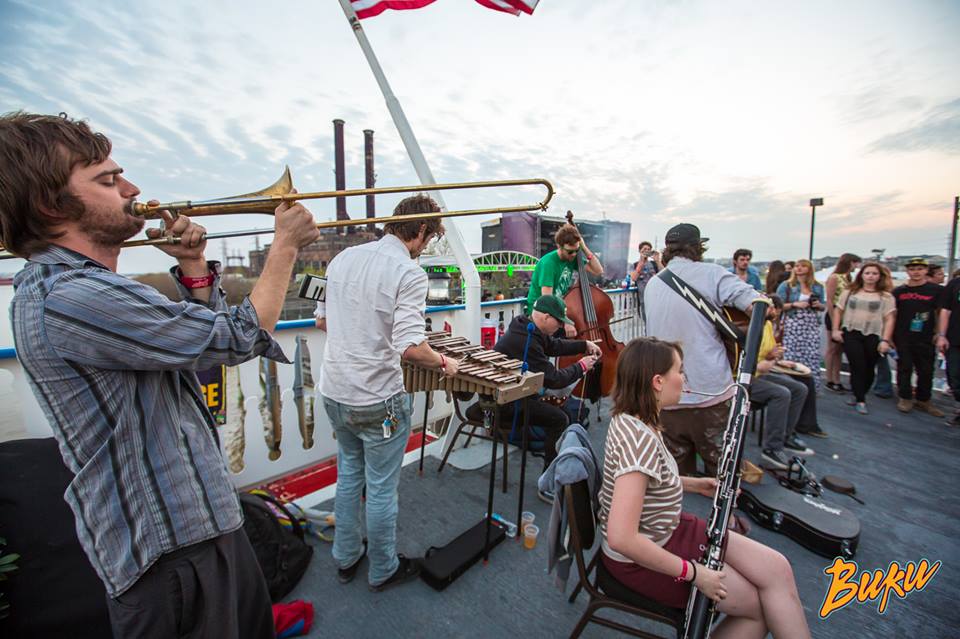 6. Impromptu BUKU Street Performances – The magic of NoLa radiated throughout the entire festival, not only through the location of the grounds, but also with spur-of-the-moment performances taking place each day in the BUKU courtyard. During one occasion, we came across a solo violinist playing an early day set, and then saw a full on folk band swing into action only hours later. [You can get a listen of Blind Texas Marlin on their Facebook!]

5. The Glitch Mob‘s Jaw Dropping Stage Production- The electronic super-group trio has been murdering the electronic scene since their inception in 2008, and they are on fire after releasing their sophomore effort, ‘Love Death & Immortality’, this February. Their stage production brings a whole new level to the visual aspect when it comes to live music, wowing fans with their stunning LED effects and projection mapping. To top it all off, the band plays their tracks in real-time, with pounding percussion and live guitars and bass, making their set one to definitely not be missed. 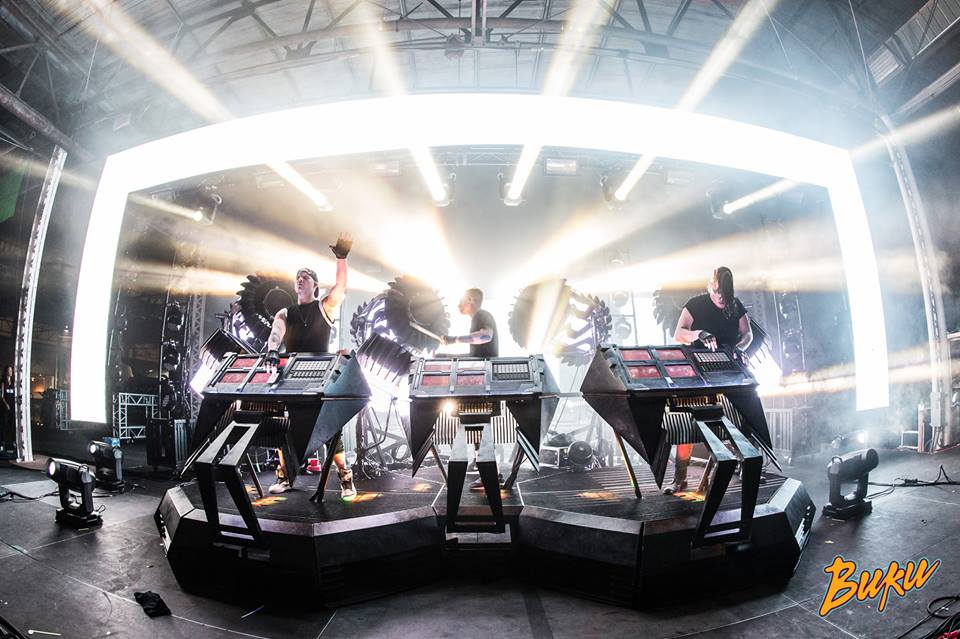 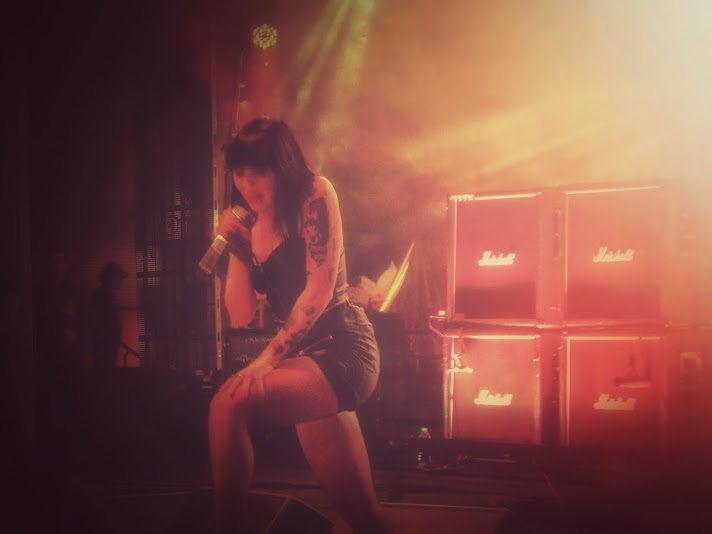 4. Sleigh Bells Slayed the Float Den-  This Brooklyn-based rock group blew their crowd away when performing at the Float Den on the first day of the fest. Their chunky guitar riffs and catchy chords put the audience in a total trance, waiting in anticipation for what could come next. Krauss pulls the crowd in with her captivating presence while she strolls the stage, crowd surfing and growling into the mic. After playing a slew of surprise shows during last week’s South By South West Music Festival in Austin, it was exhilarating to see Sleigh Bells slaying the stage once again, with not a single change in energy.

3. The GasLamp Killer’s Surprise Appearance  – When a sudden travel delay forced a time slot to open up early in the day, festival-goers were in for a huge surprise when The GasLamp Killer took to the Power Plant main stage. Initially only scheduled  for the VIP S.S. Blu-Ku Ship, the entire populace of BUKU were treated to an hour long set by one of the craziest live performers in the scene. The former b-boy is known for transforming the stage into his personal dancing playground, and his raw style of energized hip-hop had the crowd dancing along from beginning to end. 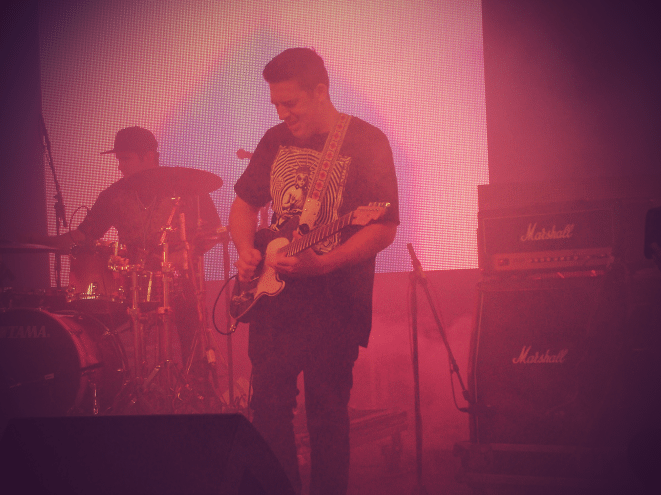 2. Conspirator Float Den Jam Sesh – The 4-piece brought their delicious jam-tronica steeze to The Big Easy on Friday. Conspirator‘s early set heated things up Friday evening, and set a high standard for the rest of the night’s performances at The Float Den. In addition to playing some serious jazzy songs and improv instrumental solos, the quartet’s stage presence is out of this world. Marc Brownstein’s faces are evidence enough; it’s obvious the man loves jamming out for the crowd.

1. GRiZ’s Jazzed-up Performance & Pre-Show Yoga Routine – Jazz and New Orleans have had a long lasting love affair, making GRiZ’s Saturday night performance at the Float Den a genuinely authentic NOLA experience. Grant Kwiecinski brought his signature future-funk sound and sexy saxophone solos to BUKU Fest, as he hyped up the crowd and laid down some seriously funky beats. What makes his live experience so entertaining is witnessing the sheer kinetic energy he brings to the stage; the man feeds off the crowds’ energy as he rocks the hell out. 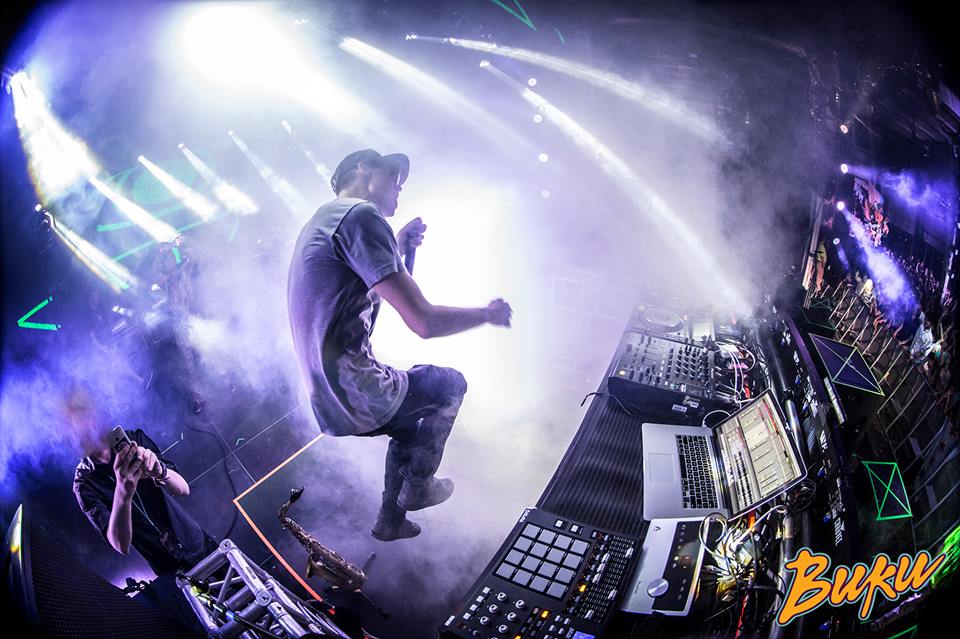 We got the opportunity to catch up with GRiZ before his set and learned that pre-show stretches and saxophone warm ups prepare him for his epic performances. Not only is Grant a talented musician and entertainer, he is also one of the best yogis in the industry. The electo-soul producer left us genuinely impressed by his vinyasa flows, yogi balance and warrior sequences; the man can even pull off a graceful handstand in lotus position. GRiZ is obviously talented in a plethora of disciplines, and we can’t wait to witness what else this young producer has in store for his fans.

BUKU Music + Arts Project was exactly what we had hoped it would be, and is now ranked very high on our own list of ‘TooBuku’ moments in life. Endless thanks to the Giant Noise team, Winter Circle Productions, as well as the local volunteers and artists who made this ridiculously fun event possible. Thank you for letting us capture these moments!