by Rey Munson
on March 31, 2014
under Festival Coverage, Rock, South
tagged alternative, festival, metal, rock, south by so what
∞ Permalink 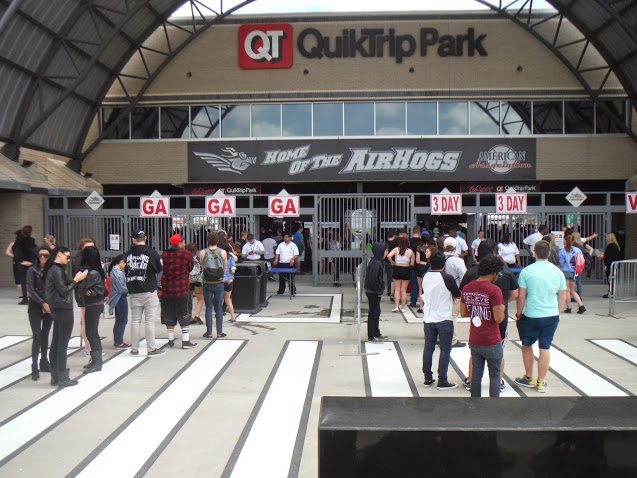 I still remember my first South By So What?! Music Festival experience as if it were yesterday. As a longtime fan of mostly alternative, heavy and progressive rock bands, I happily accepted the opportunity to cover SBSW 2014. Third String Productions, a company based in Plano,TX, is now in their 10th year of bringing some of the best talent in metal/rock to DFW’s music scene. Back when I attended in 2011, the lineup featured Animals as Leaders, We Came as Romans, Asking Alexandria, and Of Mice & Men, who had all returned as well for this year’s round of madness. Needless to say, my level of stoked was riding high upon reading what else SBSW had in store for 2014. Boasting fan favorites such as Taking Back Sunday, The Used, Chiodos, Between the Buried and Me (you can find our on-site interview with bassist Dan Briggs here) and more, I knew I had a long yet epic weekend ahead of me. 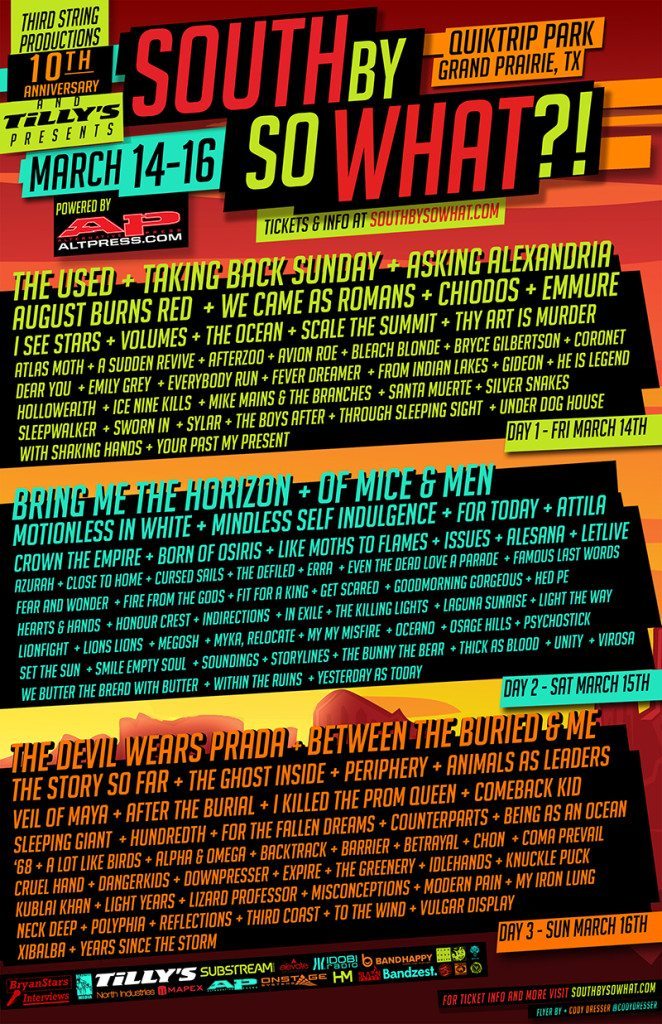 Moving on up from it’s humble beginnings at the Plano Center, the festival was now maxing out the much larger venue, QuickTrip Park, in Grand Prairie, proving just how much growth SBSW really has undergone. A line had already formed at the box office before noon, and the parking lot was jam-packed with anxious rockers, blaring metal from their car stereos in celebration upon arriving. When entering the gates, I was welcomed by wailing guitar solos and the sounds of pounding drums and crashing cymbals. I had made it to another year of South By So What?!.
Having never been to QuikTrip Park, first on the agenda was to get a feel for the venue’s layout; I needed to know where all 3 stages were located, signing booths for fan meet and greets and, of course, the bar. Needing someplace to gather my thoughts and coordinate a game plan, I found a spot at said bar and read over my notes, while also introducing myself to the festies around me. Not too long after I’d sat down, Cameron Liddell, rhythm guitarist for one of the headlining bands, Asking Alexandria, spontaneously took on the role of bartender, generously pouring shots of ColdCock Whiskey for adoring fans. Seemingly unphased by the screams and bright flashes of more than a dozen cameras going off at once, Cameron took the opportunity to pose with as many followers as possible, posing happily and embracing his fans during their photo ops. Needless to say, I found this very refreshing to see. He was of course promoting his band by simply being there, and they were scheduled to take the stage that day as well, but he took it a step further by really connecting with his fans, and stayed for every photo. The best part was that he didn’t seem bothered or otherwise disinterested; he was perfectly content playing bartender with the crowd. 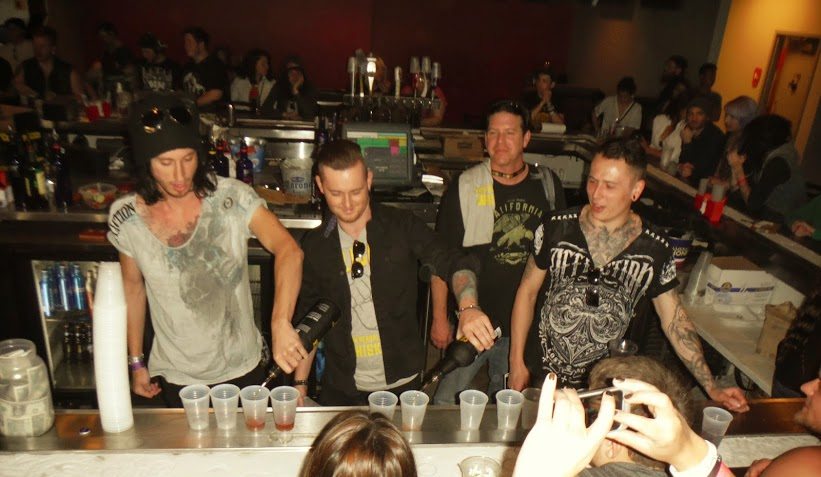 Scanning through my festival schedule, I headed to the media lounge to prepare for my interviews of the day. This is when I noticed numerous band members participating in signings, group pictures, merch sales and more. Pretty often in my experience of live shows, I haven’t found many artists to be so easily accessible. They’re hanging out backstage, or kicking their feet up before their sets on tour buses. However, SBSW was different; it all felt like one chill session involving fans and bands alike. Rocking a laid-back and relaxing atmosphere, there was a homely vibe throughout the weekend. Studying my notes, I watched as countless fans took photos one after another, and each band member was more than happy to oblige. Again, I was seriously impressed with the down to earth vibe of this festival. 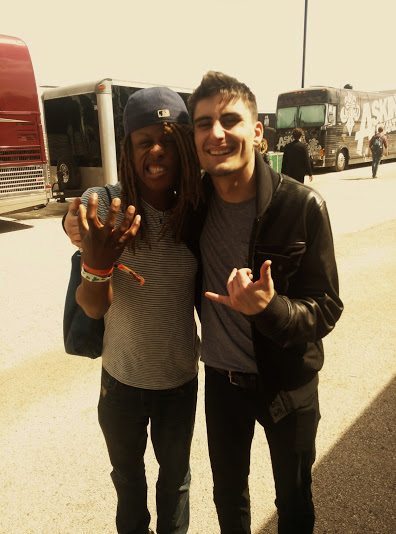 Friday (03/14) Highlights:
Captivated by the familiar sounds of We Came As Romans, I made my way front and center for their set. Undeniably one of the most anticipated sets on Friday, WCAR has a worldwide following and are steadily climbing in popularity. Kyle Pavone (pictured with myself to the left), who shares the role of vocalist with David Stephens, riled up the crowd when he jumped into the crowd and began walking on the shoulders of fans, which has undeniably become his signature. The highlight of their set was without a doubt when they played a fan favorite, “Roads That Don’t End and Views That Never Cease”.
Having no interviews for the day, I set out to get to know my fellow companions in the media lounge.
Nearing the bar, I was approached by a guy about my age with red hair, with what seemed to be a thick transatlantic accent. He says I look familiar and asks if I’m staying in the same hotel as him. As a Dallas native, I reply no, and that I lived near by. He then goes on to explain that I looked very similar to a ‘fellow’ he had noticed at his hotel earlier.
Now curious, I ask how far he’s come for the festival, and who he’s there to see. Interestingly enough, as it turns out, he was a drummer in a band called Laguna Sunrise who were playing Saturday. They had come all the way from the United Kingdom for the festival! We finally introduced, his name being Ben Gaines, and we walked over so I could meet the rest of the band, who were busy taking photos with a crowd of fans close by. After the festival, I actually ended up taking Ben and the guys, Jay, Nick, Daryl, Stef and Ross on a tour of the best Dallas spots.
Saturday (03/15) Highlights:
My priorities for Saturday changed upon arrival, as the bad weather made a few band cancellations happen, including headliners Bring Me the Horizon. Wanting to familiarize myself with Laguna Sunrise, whose set was still on time, I made my way to their stage soon after arriving on festival grounds. Forcing my way through the crowd, I managed to find a place near the front rail where I experienced the full energy the group had to offer. These guys were outright showmen when playing live. It was clear that they were beyond excited about being in the states, and the crowd loved it. Guitarist Stef Gaster left the stage and made his way into the crowd, shaking out-stretched hands and giving away guitar picks and other swag to excited fans. 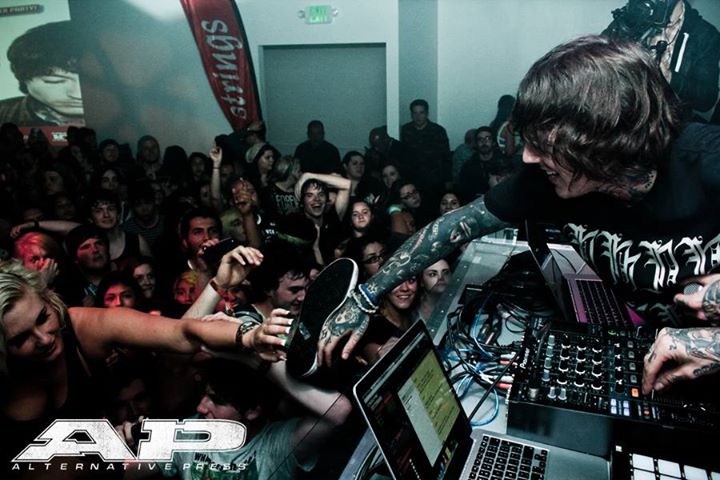 Unwilling to end the day with the closing of the venue, I headed to the official after party hosted by The Globe.  To my surprise the party was packed with artists from the festival, along with guest appearances as well. Lead vocalist Oli Sykes from Bring Me the Horizon, hyped up the crowd when he took to the turn tables as DJ. There were hundreds of people packed against the walls of The Globe, brimming to the top with energy. Fans screamed, crowd surfed, and snapped photos as more DJ sets happened throughout the night, including by bands Born of Osiris and Issues. 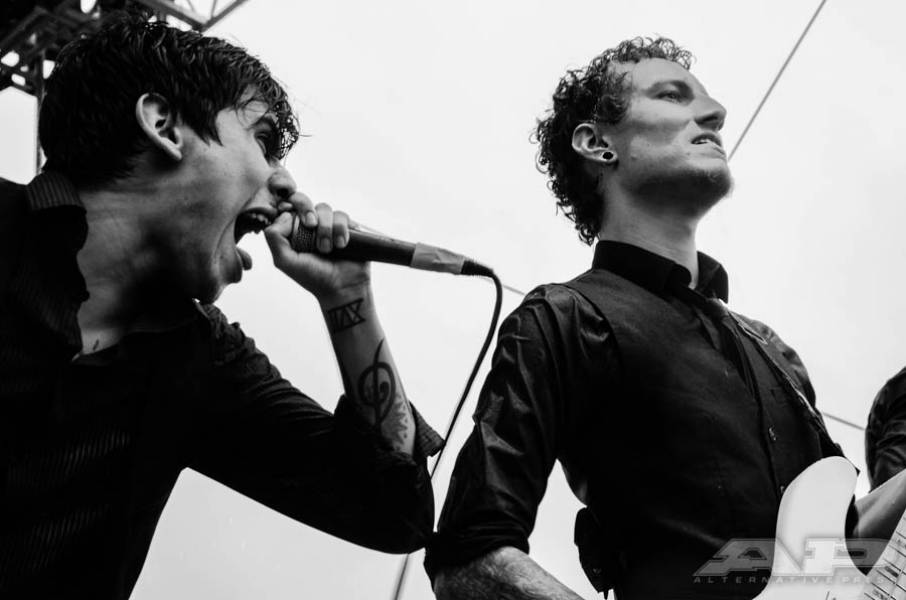 Due to inclement weather a handful of bands were canceled or rescheduled for the 3rd and final day. The weather didn’t seem a big deal to most at first, until a soundboard exploded during Crown the Empire’s set. They continued playing without sound to satisfy their fans (admirable), and the crowd remained in the open air of the stadium while the rain came down even harder. Event coordinators reimbursed guests from the second day by allowing entry with day 2’s ticket, making the final day of SBSW, despite the cold, the most populated date. The weather hadn’t gotten much better, and the harsh wind had many seeking refuge under the venue’s covered bleachers. During these breaks, I took the opportunity to visit a few merch tents, to where my surprise, various band members were stationed, still present at their signings, happily meeting and greeting their followers. This made me smile, because on a cold day, I would’ve expected the artists to be warm in their bunks, and who would blame them for escaping the weather?
Sunday (03/16) Highlights:
My agenda for the final day of the festival was clear; nothing was going to stand in the way of getting to see Devil Wears Prada, not even the freezing winds that began picking up. Once tucked inside the crowd, the climate was quickly forgotten. DWP played a very energetic and intense set, playing a variety of songs from their most recent albums, as well as a track or two from their first release. To end their show, fireworks erupted from behind the stage, creating a perfect opportunity for everyone to take in the sky after the hour long moshing session. Heading back to the media lounge before ending my day, I met up with Dan Briggs, bassist for Between the Buried and Me, for an interview (which can be viewed here). Glorious Sunday funday? I would say so.
My overall experience of 2014’s South by So What?! was an absolute success. Not only made possible by the stellar lineup of bands, but also by the hands who created it; Third String Productions. Trumping other fests in just how personal of a vibe their events have, Third String Productions has created a solid and loyal fanbase, who I will continue to support for years and years to come.