If Euphoria Music Festival‘s initial lineup announcement wasn’t enough to leave you desperately awaiting the end of April, they are back with a whole new round of surprises. Euphoria is going for diversity this year and that feat is definitely being achieved through a new and improved eclectic lineup that appeals to nearly all live music lovers. Some of the highlighted talent that round two has to offer include: The Crystal Method, Opiuo, Earphunk (as Daft Phunk too), Blunt Force, and many more impressive names on the festival circuit. 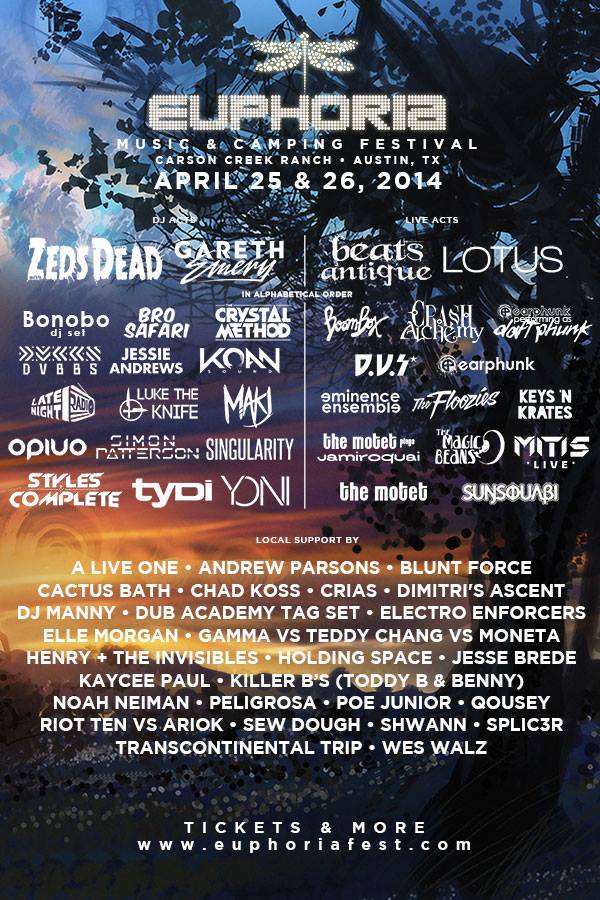 The Crystal Method is one of the original pioneers in the EDM scene with their hard hitting bangers and live band accompaniment. TCM is actually making their very first North American festival appearance of 2014 at Euphoria Fest.

New-Zealand born producer Opiuo will be bringing his spacey-glitch hop sound to Euphoria Festival. The electronic music crafter is notorious for incorporating a plethora of genres from funk to jazz to downtempo and everything in between.

Earphunk is an established jam band known for their improv performances and sexy instrumental solos. The 5-piece band will be performing a set of their own original stuff, as well as an additional Daft Phunk set, which is the jam-band tribute to Daft Punk complete with lazers.

Blunt Force is one of Austin’s favorite local producers, who recently released his first future-funk EP “A Brighter Tomorrow”. If you’re a fan of livetronica keep an eye out for this budding producer.

As part of its transformation, this will also be the first year that Euphoria Festival is going to include interactive workshops and amazing art-installations in addition to live music acts. Keep an eye out for the workshop and art schedule, and additional surprises that we know the creative minds behind Euphoria Fest have up their sleeves.