The shepherd’s pie: over a century old, simple and often bland. A meat pie with mashed potato crust, shepherd’s pie is akin to a UK version of meatloaf. Today, we will re-examine and revitalize this savory comfort food with a few minor tweaks to the original recipe. Malbec wine, horseradish, and fresh dill add depth and complexity that will leave your mouth watering in anticipation. 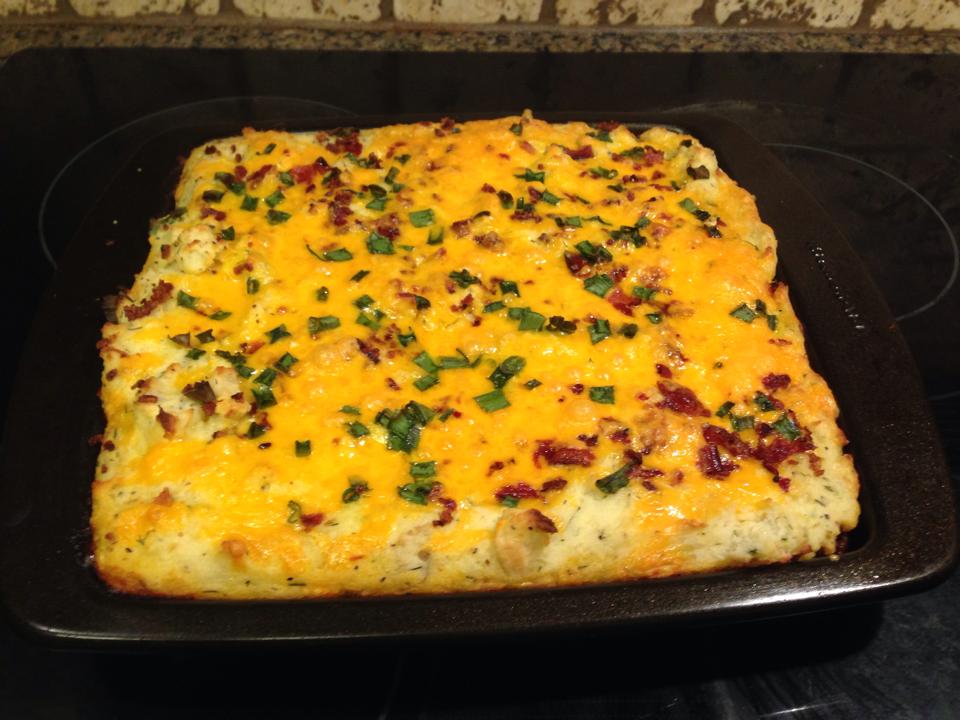 Preheat your oven to 400 degrees Fahrenheit. Place your foil-wrapped ½ head of garlic directly on the middle rack for 25 minutes and remove to let cool for at least 10 minutes. Gripping the base of the head, cut the pointed end of the garlic paper off the entire head. When doing this, it will be necessary to remove a small portion of the cloves as well. Squeeze the garlic like toothpaste, and all of the cloves should squirt out with relative ease. Give the garlic a rough chop and set aside. Peel the potatoes and cut them into 1” cubes. Place in a sauce pot, then fill with cold water and a dash of salt. Place on stove at high temp and boil until the potatoes are tender, about 15 minutes, then drain. While the potatoes are boiling, lay out the four slices of bacon on a cookie sheet and bake 8-10 minutes until crisp, but not burned. Chop the bacon into bits. At the same time, place your Campari tomatoes in a small loaf pan with 2 tbs butter, and a pinch each of salt and pepper.

Bake the tomatoes for 30 minutes and set aside. The two ears of corn are to be brushed with a bit of olive oil, sprinkled with salt and pepper, and then baked for 10 minutes at 400 degrees. When cool enough to handle, remove the kernels from the cobs. In a large cast iron skillet set to medium-high heat, add 2 tbs olive oil and 2 tbs butter to the pan after it is nice and hot. To the skillet, add the celery, carrot and onion, then a pinch of salt and pepper. Stirring occasionally, sauté the mirepoix (celery, carrot, and onion) until translucent. Add the remaining 3 cloves of minced raw garlic and the roasted Campari tomatoes to the skillet, stirring constantly for around 30 seconds, until fragrant. At this point, add in the ground venison, season with salt and pepper, and add ¼ cup of veal stock. Cover and simmer over medium heat for 7-8 minutes, stirring occasionally. Toss in the corn and peas, cooking for an additional two minutes. Drain The veal in a colander, place the cast iron on low heat, then pour in the Malbec and scrape the brown bits from the bottom of the pan. Set aside.

Finely mince a handful of fresh dill, mixing it into the potatoes along with red ½ tbs red wine vinegar, 2tbs butter and ¼ cup half and half, as well as horseradish and two egg yolks. Add salt and pepper to taste. In a clean saucepan over medium-low heat, add 3 tbs butter and then ¼ cup all-purpose flower upon melting. Slowly scraping and stirring in a constant, deliberate fashion, bring the roux to a nice nut-brown hue. Working quickly, add tomato paste and two bay leaves to the roux and stir quickly to incorporate, all the while scraping the bottom of the pan to avoid burning anything. Once the tomato paste has effectively been absorbed and homogenized with your roux, de-glaze the pan with the malbec that deglazed the veal. Allow the same reaction to occur with the wine as with the tomato paste, then add 1 cup veal stock, once again stirring to combine. Stir in ¼ cup of half and half, then remove the gravy from heat and discard the bay leaves. In a mixing bowl large enough to contain the gravy, vigorously beat two egg yolks, until they thicken slightly and appear to be sticky.

Starting with only a tablespoon at a time, slowly add the gravy to the egg yolks, while vigorously whisking. Only add more gravy when the previous addition is completely incorporated. After ½ cup or so of the gravy is incorporated, a slow, steady stream is appropriate to finish the job. Ladle ¾ of the egg and cream enriched red wine-tomato enhanced brown veal gravy into the venison and toss to evenly coat. Transfer the mixture to an oiled 12×12 or 13×9 baking dish. Spread the mix evenly with a spatula. Spread the remaining ¼ of the gravy over the venison. Starting with the outermost perimeter and working in, smear the mashed potatoes into a thick, completely sealed layer on top of the gravy. Sprinkle the grated cheddar cheese, bacon bits, and sliced green onion over the mashed potatoes. Bake for 25 minutes, let cool, and enjoy! 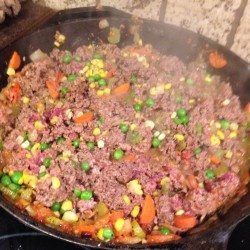 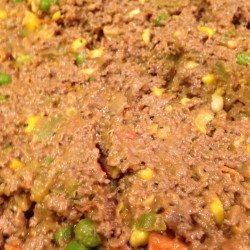 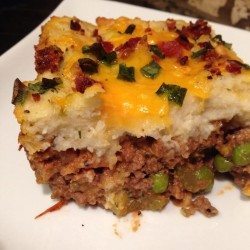 This rendition of shepherd’s pie exploits fully the potential of a multi-layered dish. The big, bold flavors within are surprisingly balanced and synergistic. This dish is like any other casserole in the sense that it travels well, keeps in the fridge for a few days, and can be partially constructed the day or night before it is needed. A medium to full bodied red such as Malbec or Cabernet Sauvignon or a dry white, think un-oaked chardonnay or Sancerre, is sure to compliment the dish. I feel quite elated as this write-up is drawing to a close. If you’ve made it this far, take a bite and tell a friend! Congratulations on successfully elevating simple comfort food into an elegant and transformed little piece of heaven.