Billy King & The Bad Bad Bad released their debut LP on Halloween and we have not been able to stop listening to it. Deemed Surf Rock From Hell, The Bad Bad Bad brings just that. A delectable fusion of hellish thematics, dark lyrics that are delightfully relatable, and insatiable guitar, bass, and drum playing that teeters at just the appropriate ear-bleeding edge.

The new album Stealing Your Potential features the solid crew of Billy King favorites that have been re-mastered and intertwined with a bunch of fantastic new songs. The band, made up of Will Reynolds (guitar/vocals), Cameron Wren (guitar), Scott Perrine (drums), and Mike Sellman (bass), threw a socially safe outdoor album release party Saturday night at The Far Out Lounge in South Austin to celebrate the new album as well as their first show in 8 long months! 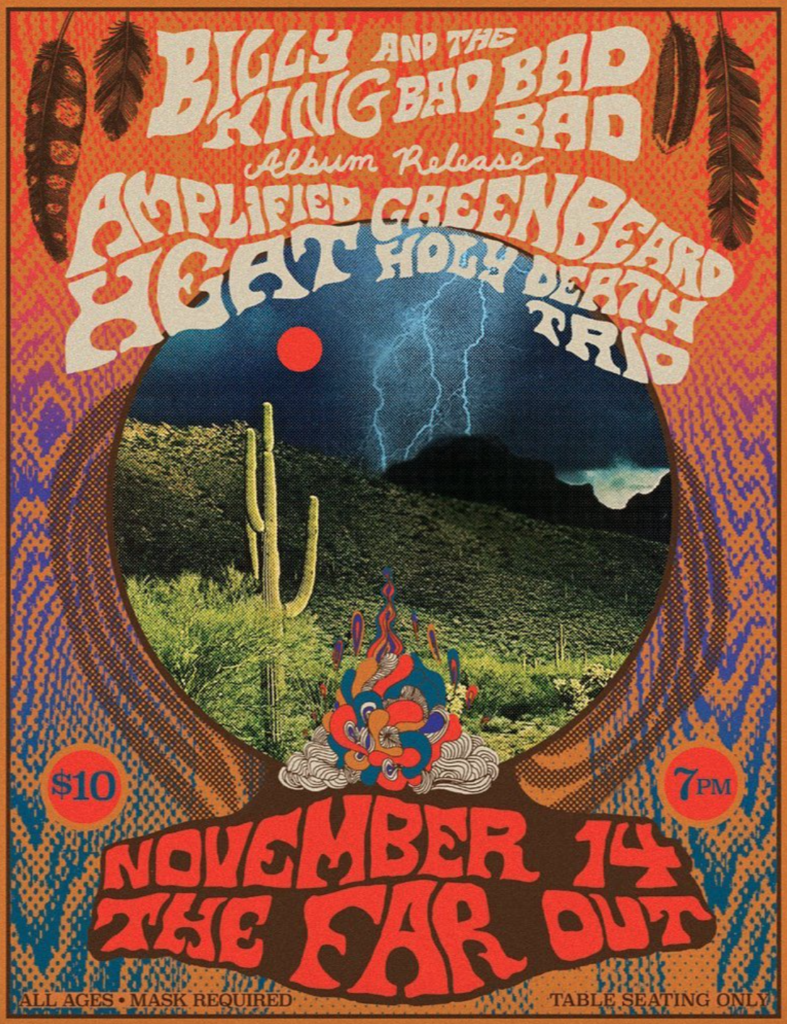 Greenbeard took the stage next. This desert rock outfit from Austin, Texas, brought a more psych heavy, stoner rock vibe into the mix, reminiscent of early Sabbath. Drawn out hefty jams partnered with lyrics of impending doom, you can certainly tell that Greenbeard has been doing this for going on seven years now. Look out for their next album to release in 2021.

Eleven o’clock hit the time circle and up came An ode to rock and roll, blood-thirsty romance, the dark side of love and fantasy, the realness of raw-kability, Billy King & The Bad Bad Bad say and play all the things we are too scared to. What follows is a rough fusion of an album and show review.

An apocalyptic song that starts off strong and demanding, the title track off the LP Stealing Your Potential, delivers a cryptic promise that the human race is graciously doomed. Or rather, the uncontrollable nature of the human race may seem that way. A heavy-hitter rattled with pleas for the cutting of control and the type of guitar playing that is not fucking around. Watch out, your potential is getting stolen right from under your meat suit so you better compose yourself and rock your life before someone else does it for you.

Next up came one of the band’s anthems, Werewolf of Love sounds like the first time you heard your new favorite Rock and Roll tune back in the seventies and just couldn’t get enough of it. It’s a sexual slaughter baby, you really just can’t stop loving this song. It’s so damn catchy, makes you want to shake your hips, headbang, and also low-key fall in love with a werewolf on Halloween.

Another classic from The Bad, Bad Bad, the Possession of Paul Revere kicks off with the traditional surf rock sound made up of heavy reverb and electric shredding. What I can only describe as a tale of the demon in your head, the evil ghost looming in the corner of the room, the ever-haunting devil that swallows up our souls in time of vulnerability, this song makes you feel. It uncovers the shadow, banishes the light, and takes you on a journey of self. With low vocal tones and a sinister, woo-ing message, “if you don’t watch out, he will take you down”.

Methmatics conjures the answers to the important questions of the universe. Time is an illusion, our consciousness is plugged into technology, and the haters don’t understand the drugs in our blood. Simple, right? Yeah, okay. The song continues to tell us that fear and mass media tries to control us, that people are all talk, and that it’s time for us to take over. Meth and motivation are powerful drugs, my friends.

One of my personal favorites off the new album, Love A Little Closer, poses that “We are freaks! Hell yeah! Yeah, we’re all freaks! That’s just Rock and Rock, Baby”. We all just need to give in to those desires of loving who we love and living how we want to because the U S of A could definitely use a little more of that. Let’s listen to the song because you’re killing me baby and all I want is your love.

Tiger’s Den is one of the first teasers we got of the new LP during quarantine and hot damn, it’s a goodie. An homage to true love, to finding yourself inside the tiger’s den and not giving two fucks about it. Extremely likable guitar licks, conversational prose to stories of the past, and electric scales that caress into a heightened build to wrap up another incredibly pleasing tune.

A few extra synopsis from Stealing Your Potential just for fun:

Lazy Summer: Imagine skateboarding down the Venice Beach boardwalk, it’s gloomy out but you have the whole world at your hands. The sun is trying to peek out but it just won’t. A global pandemic has left you jobless, loveless, and pretty much hopeless. At least you have this lazy summer jam to keep your foot pushing against the concrete. Don’t forget to ask yourself “how could it be that this nightmare is our reality after all?” Well remember that it’s all an illusion.

White Noise: Laced with a more punk-rock noise, White Noise reminisces on that person in your life that did you wrong but won’t ever admit it. This song brings out the anger, the frustration, and really makes you want to headbang that asshole out of existence. We will always remember the people that did us dirty, but we don’t have to dwell on it. They are simply White Noise.

Animal: A softer, more ballad-like beginning with a simple, but iconic chord structure, Animal, is another one of my new favorites tracks. We hear the guitar cry, and Will ask “could this be madness or am I hiding my own thoughts (1:00?)” The song nods to the animalistic tendency of human nature and how it entangles with the perplexities of love and freedom in life. The song cascades into a psychedelic jam before ending with the self-justifying chorus.

Educational Television: This tune may be the most relevant off the album, as it brings up pertinent themes of today’s truth: control of the masses by media. The idea that we are all constantly being conformed. “Do or die you must obey, forcing you to stay asleep and behave…now’s the time to stand up and fight the propaganda machine…You have the choice that’s your right. Because there’s a war upon your mind.”

Be sure to pre-order the vinyl or get a digital copy of the album HERE or stream on Spotify. Hopefully we can see more socially safe live music soon! 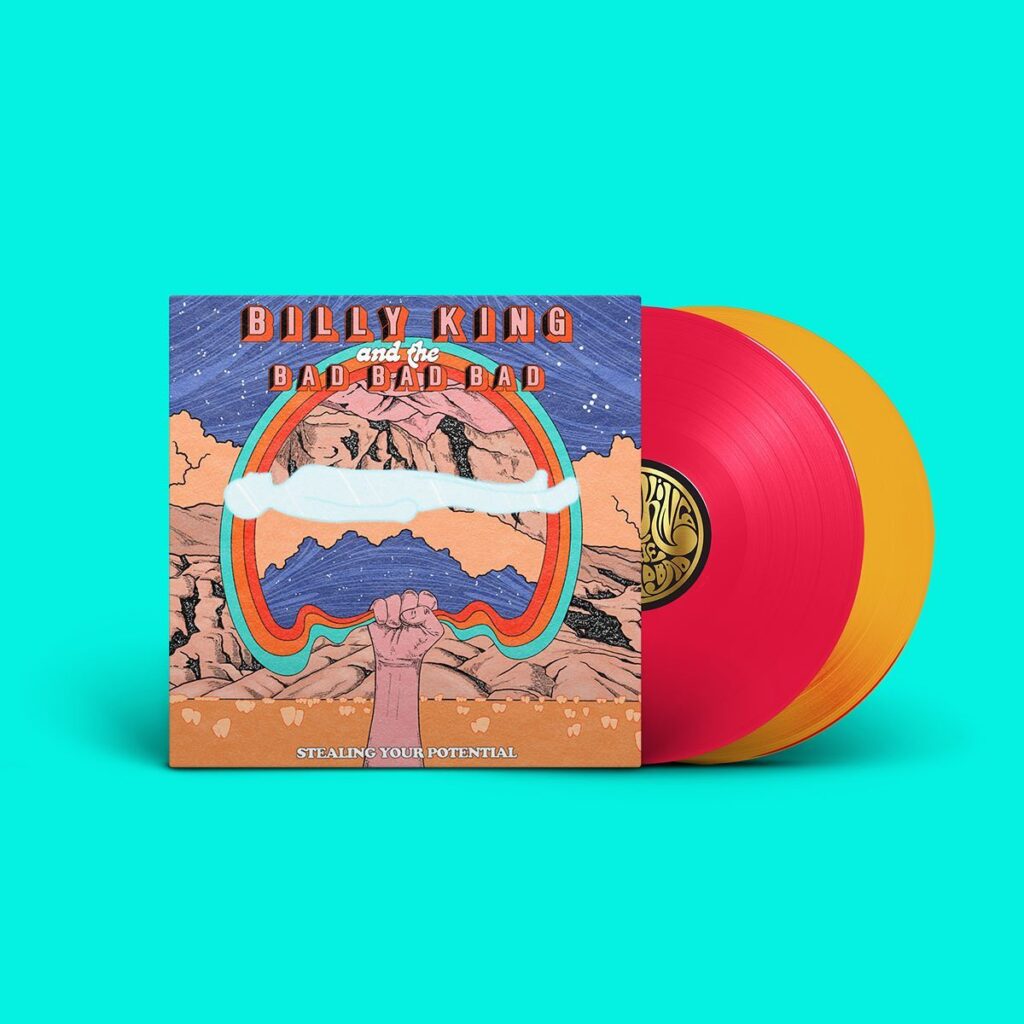