It’s mid-August. It’s perhaps not quite as hot outside as it was a few weeks ago. Pool parties are winding down, back to school sales are cropping up…

NO BUT WAIT – IT’S STILL SUMMER FESTIVAL SEASON!! And the folks up in Austin are throwing a big one to close out the scorching Texas summer.

Waterloo Music Festival is the first of its name – a three-day camping festival held from September 7 – 9 at Carson Creek Ranch featuring the best the national and local jam band circuits have to offer. 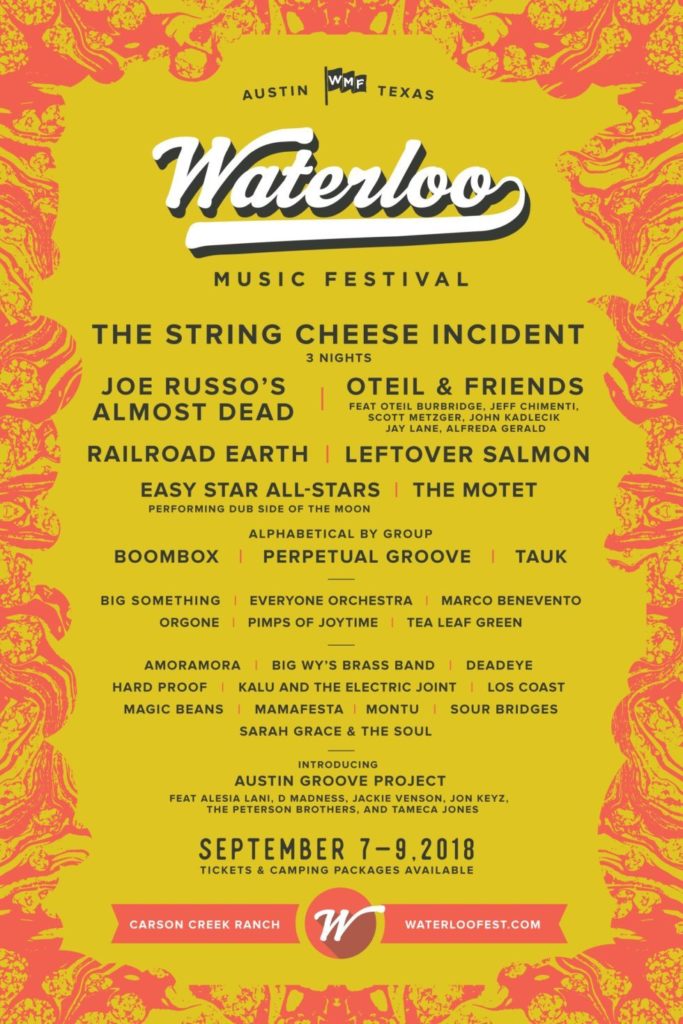 Who’s playing you ask? Buckle up, man – this festie features three nights of The String Cheese Incident! Filling out the top billing for this new festival are Railroad Earth, Joe Russo’s Almost Dead, The Motet, Leftover Salmon, Oteil and Friends, and Easy Star All Stars!

The newgrass and funk are firmly represented with String Cheese, Railroad Earth and The Motet. The essential Grateful Dead presence underpinned by JRAD and Oteil (whose band features Dead veterans Jeff Chimenti, Jay Lane and John Kadlecik among others) sweetens the pot. Oh, and a fun fact: Easy Star will be playing the dubbed out reggae tribute to Pink Floyd that put them on the map:

Dub Side of the Moon. In its entirety. Live.

All this alone is worth the price of admission, but of course there is so much more! Perpetual Groove, Tea Leaf Green, Orgone and a few others fill out the national acts, and straight out of Austin we have bands like Hard Proof and Deadeye to round out an exciting new festival to add to our calendars.

You can find more information at Waterloo’s official website or you can get your tickets/camping passes here.