It’s crazy to think how large the numbers of music festivals have increased in recent years, but there’s no denying it – festivals are popping up everywhere you turn, but some will always remain second to none. Of course, we’re talking about Electric Forest. In its 10th year the festival has only grown more successful, expanding to two weekends last year. With so much turmoil dominating our world today, I was beyond looking forward to being back at Sherwood Forest – a spot with a very special place in my heart. 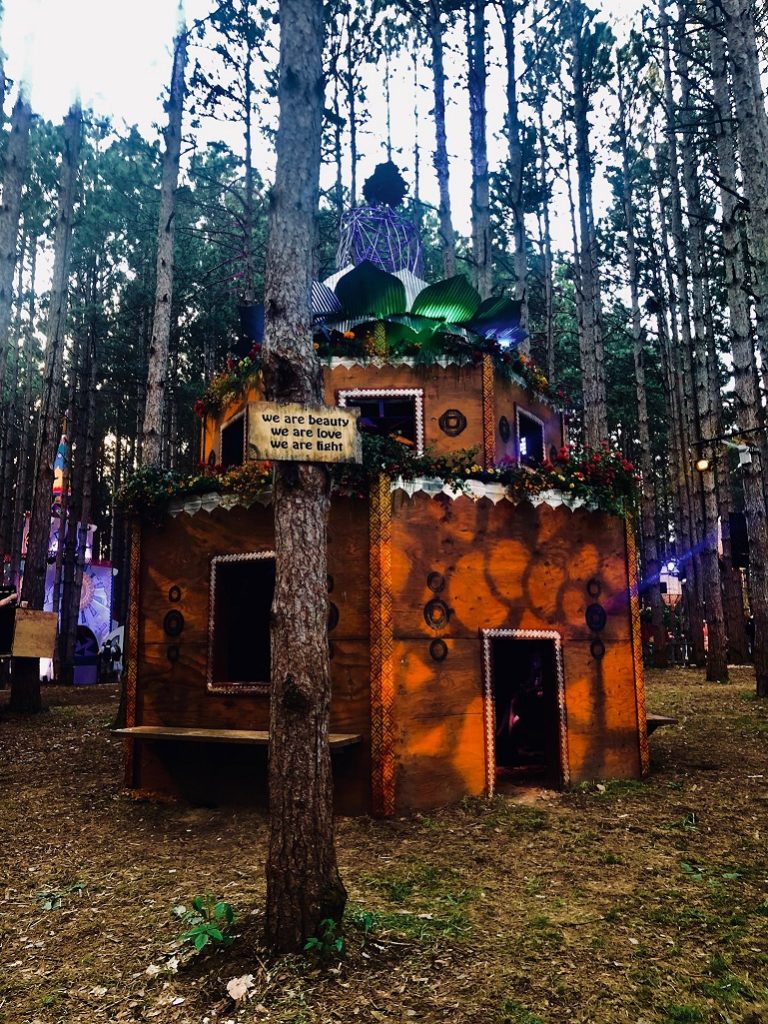 With the Travel Gods working against me, I ended up arriving to the festival later than most of my friends, I was eager to get caught up on everything this year had to offer, from new art installations to the latest stage additions. Coming upon String Cheese Incident at Ranch Arena, I bounced around while taking in the beautiful view of the massive stage and the happy go lucky crowd. I always love people watching during Cheese – everyone is full of happiness, and it’s purely infectious. The band were knee deep in a spinning jam session when we caught sight of the Cascade Blonde lounge station. Situated just outside Ranch Arena, we were treated to charging stations, some much needed A/C, and the finest whiskey we’ve ever had. Filtered using limestone Cascade spring water, Cascade Blonde is smooth, flavorful and unique. If you’re unaware, the addition of limestone water is key when it comes to Bourbon whiskey, and Cascade Blonde have perfected their recipe. After the festival we arrived home to our own bottle – a pretty fucking great post gift if you ask us. 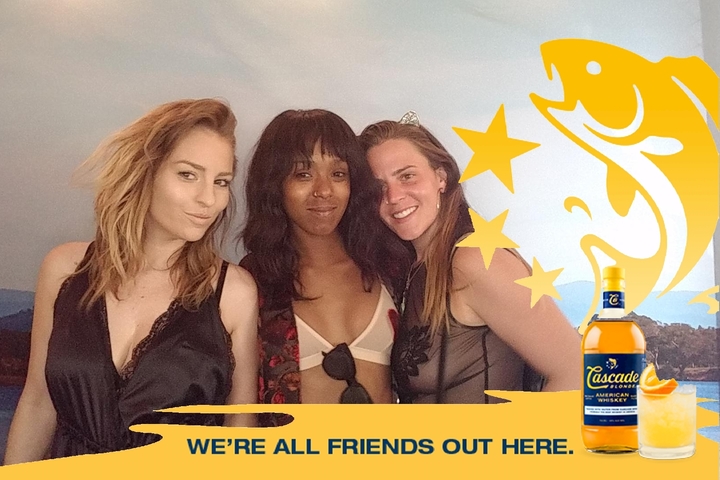 Entering the forest I allowed myself plenty of time to immerse myself in every corner that caught my eye. Being the summer solstice, I took in the extra sun while exploring the several meditation gardens and structures in the Forest. Eventually I found my way to the Observatory stage for my first set of the day – Justin Jay’s Fantastic Voyage. Having missed their earlier set at Tripolee, I was grateful for the second chance. I almost always have Justin Jay on blast at home, so I wasted no time in singing along to every song. Stopping to speak, Justin pulls out a guitar while announcing it was only his 4th time playing the instrument, but when he started shredding I couldn’t have guessed it. It was clear to see how much fun the band was having, so eventually the whole crowd was shaking their heads and swinging their hips from side to side. Russ Liquid also sat in with Justin Jay towards the end of their set, giving a pleasant dose of horn to their sound. They’ve been doing a bit of touring together recently, and I’d love to see that bill come to an intimate venue sometime soon. 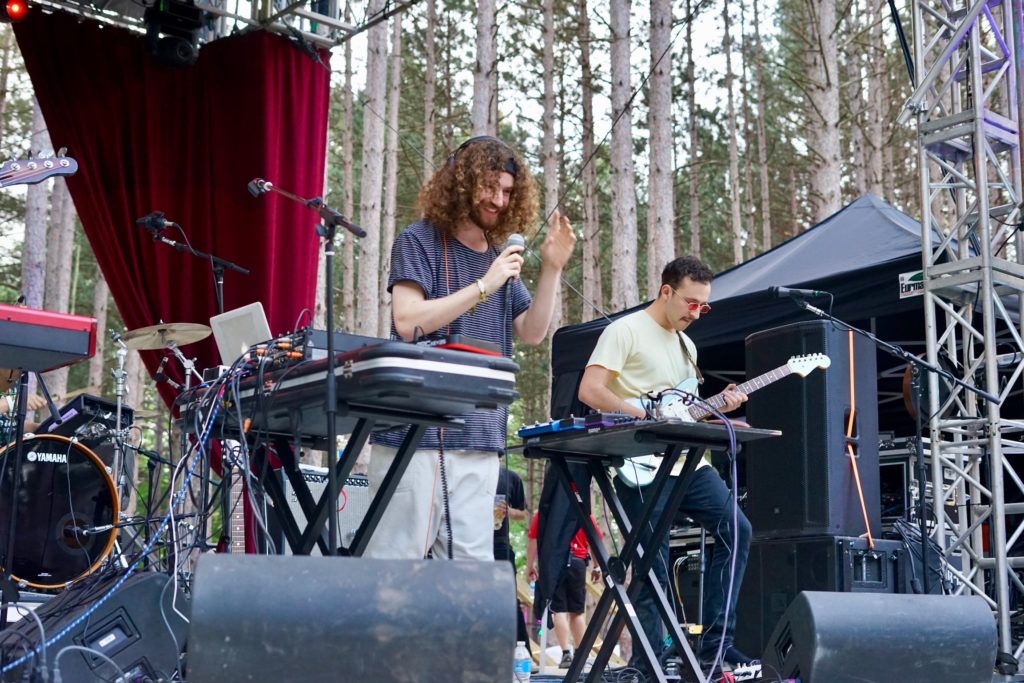 Due to flight cancellations, Keys N Krates were unable to make their slot – but Clozee saved the evening by taking their place at Sherwood Court, which was honestly well deserved and dope to see. She continues to step up her live shows and production game every time I see her, and the smile on her face during the entire set makes me excited for what her inspiration from Forest will turn into. Catching Russ Liquid Test back at the Observatory, their future vintage grooves were a perfect compliment to the prior glitched out Clozee set I’d come from. The band supplied catchy samples, fresh tracks and nostalgic covers to close down the stage.

When your friend is celebrating their birthday party at the Grand Artique’s Trading Post, you throw your heart pasties on and snag a front row seat. Jason Huber of Cherub kicked off his shenanigans to a packed out crowd of friends and fans while the sun hung high in the sky. Totem poles plastered with baby Jason  photos spiked the air, and cookies were passed out as he spun classic 70s and house hits. 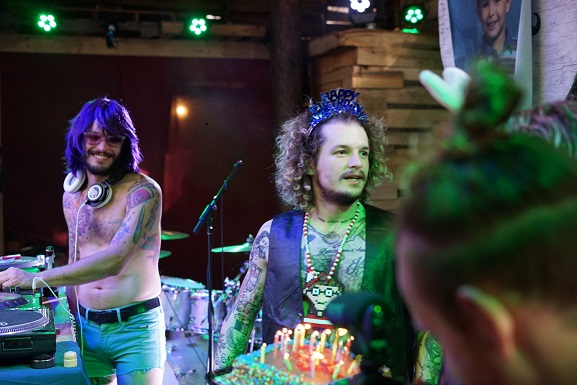 After lingering for a few hours I had to pull myself away in order to catch Mr. Carmack, one of my favorite producers. I always say to never miss a Carmack show, and his set at the Forest Stage has reinforced that belief ten fold. It was hard to break away from his insane new edits and crispy transitions, but I had to make time to check out Stickybuds, a staple from another one of my favorite festivals, Shambhala. Gracing the new Carousel Club stage, Stickybuds lit up the room with his relentless energy and showed Electric Forest what he was all about. He juggles reggaeton, hip-hop and drum n bass so seamlessly that every set is a completely new and wild experience. Carousel Club is the latest addition to Electric Forests’ sprawling grounds, bringing the grand total of stages to nearly 10.

The only thing that would complete my night would be ending it with Dynohunter at the Forest stage. After losing a handful of crew members earlier in the day, we all found each other while dancing dirty at this late night set. Dynohunter is the perfect marriage between soulful rhythms and dark techno beats, and they pull it off with ease. 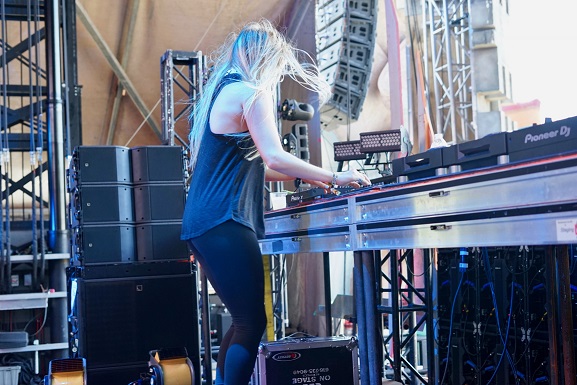 Rallying up to kick off Saturday’s festivities, I started towards Tripolee for Maddy O’Neal’s Electric Forest debut. Hosting an array of trap and dubstep throughout the weekend, today’s set was a nice switch up. Maddy’s set was a versatile blend of uptempo bass and electronic soul beats, and she drew in a bigger crowd as she continued to slang beats. I had to dip out early to make the journey across Sherwood Forest to catch a bit of Knox Fortune at Jubilee. He’s produced some of my favorite hip hop beats, and seeing him live was icing on the cake. His live style was more downtempo than I expected, but I loved being able to take in both sides of his production. A Tribe Called Red brought their eccentric tribal fusion beats to Sherwood Court, and it was one of the most mesmerizing performances I’ve seen yet. If I hadn’t been getting pulled in several directions I would’ve stayed for the duration, but alas, that’s how the forest goes. We headed off for a juicy house fix with Golf Clap at the Forest stage and found several others boogying between the trees as well – shout out to marker number 38. Continuing on our way, Fort Knox Five was calling our names from the Silent Disco. I’ve always been a diehard FK5 fan, and any time I’m at a set I have the sappiest, feel-good smile on my face. There’s always so much love on the dancefloor that I almost wanna burst.

Soon though, I knew my dancing feet had somewhere new to be – Zhu was taking over the Ranch Arena, and I was dead set on catching the introduction. Visuals of desert skies and crisp clouds moved behind the band while the rest of the stage remained shrouded in darkness. Zhu’s soaring vocals along live guitar and saxophone blew my expectations out of this world –  I could’ve stayed dancing there all night long. Electric Forest may be the only party on earth where the VIPs are spending most of their time in the GA campgrounds. For example, Mija’s all night/early morning b2b set with Justin Jay and Louis the Child kept us raging until 7 in the morning on Sunday.

Sleeping in through Sunday afternoon, I took my time indulging in scavenger hunts courtesy of the Hanger, and filling out more clues for my Passport that had been issued by the Time Travel Agency. Whether you’re getting your passport stamped at the Time Travel Agency, waiting on your beautiful new convertible in the Auto Shop or trying your luck at the Pawn Shop, we became so immersed in the Hangar’s pop-ups that we found ourselves looking for ‘clues’ everywhere. It wasn’t until Flamingosis at the Forest stage that I finally linked up with friends to groove, and I was grateful to catch what I did. Dancing in the sunshine to his buttery 70s tracks, Aaron sent us on our way with some dope beatboxing to end the set. Mobbing over to catch Manic Focus at Ranch Arena, the stage was filled with several special guests such as Russ Liquid, Andrew Block (Russ Liquid), ProbCause, Clark Smith (Dynohunter) and more.

Afterward, I spent more time exploring some of the installations I hadn’t caught yet, such as the Labyrinth by Alchemy Arts Collective and a few pieces by Muttley Metals. I had gone all weekend without a ferris wheel ride, so we decided to make it happen for Charlesthefirst’s performance at Tripolee – a match made in heaven. The young producer’s transcendent bass melodies had me hooked upon first listen, and I’ve definitely become a fan since seeing him. His performance was the perfect lead into Rufus du Sol at the Ranch Arena, and I spent the next hour feeling like I was floating on air. Their set list included favorites such as ‘You Were Right’, ‘Until the Sun Needs to Rise’ and some new music as well. 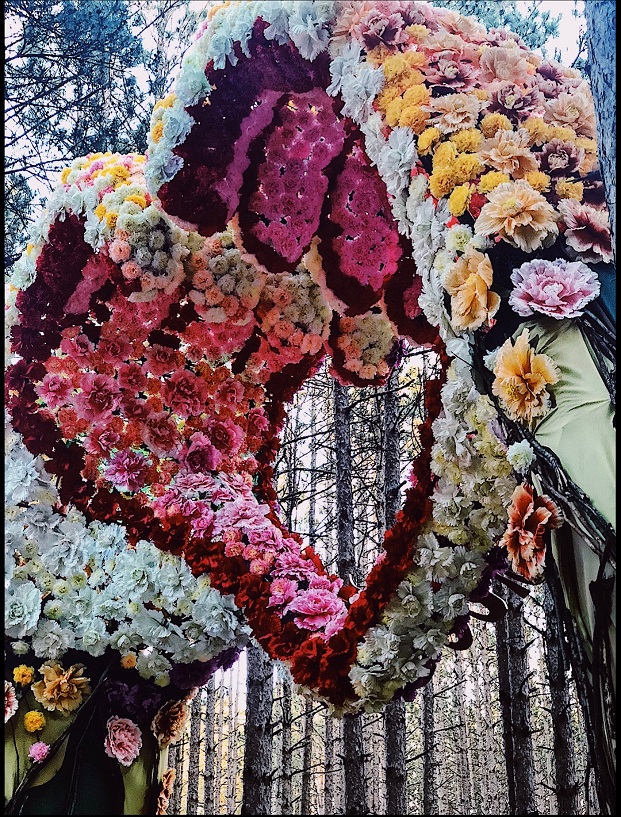 Turning in for the evening to begin my journey back home the next day, I reflected on the beautiful weekend Electric Forest had offered me. From secret after-parties to off-the-path adventures, there is so much more happening beyond the music. In my eyes, I always view the lineup as a bonus to an already epic experience. People who haven’t seen each other in years will find each other in the forest, or end up having a completely unique experience from their friends – If you are receptive to it, the Forest always provides. I know countless people who celebrate friendship anniversaries, met and fell in love here, and more. This magic is often lost on festivals of this size, but Electric Forest still has it. I’d go out without my phone or friends and end up dancing right next to them by the nights end – I was never in a rush to find anyone because I just knew we’d run into each other in a beautiful way. Coinciding with the summer solstice, the sun hung high in the Michigan sky for hours, adding onto the Forest magic. There’s a reason I return to EF every year, and I’m already looking forward to 2019’s adventure. In the meantime, I’ll be counting down the days until we’re all home again.