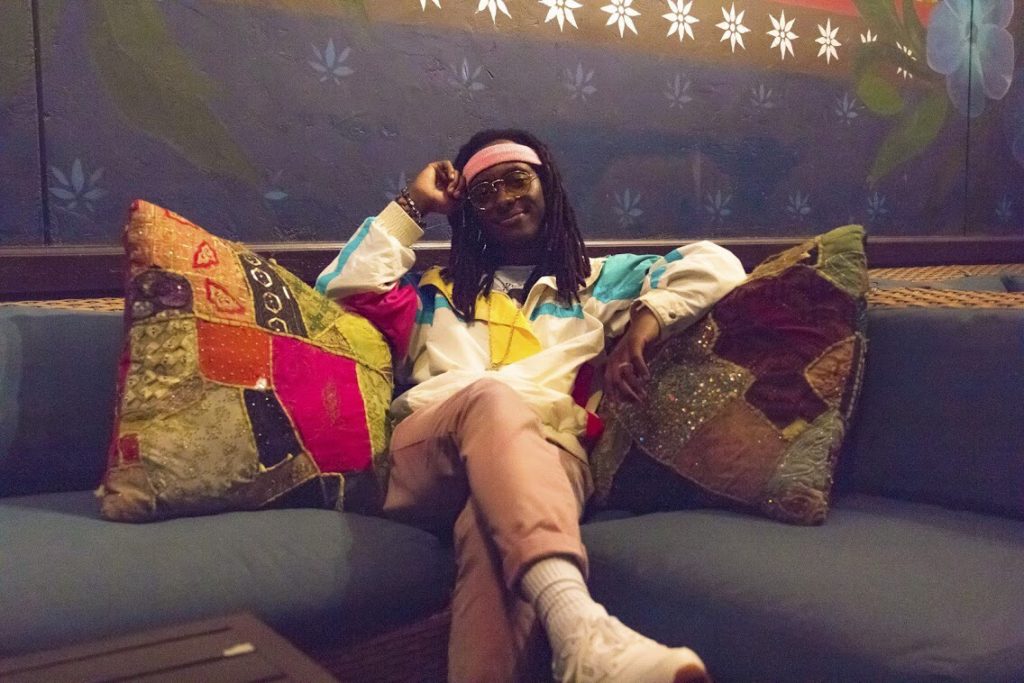 I sat down with Atlanta native Demo Taped after his show to talk about his new EP, Momentary.

His signature smooth electronic sound is back with a bold message about mental health and being yourself. With tracks like, “Insecure” and “Own it”, Momentary is an invigorating, approachable take on personal struggles. Pairing upbeat dance-friendly tracks with resoundingly candid lyrics, Demo Taped strikes the perfect balance between roughness and a light-hearted soundscape.

Momentary isn’t just a retelling of the bad times, but an honest statement about confronting and accepting the moments in which we don’t feel as confident as we’d want. Complimented by velvety vocals, his EP comes off just like his energy during the interview- inviting, kind, and genuine.

Demo Taped is touring across the U.S. and fueling the conversation around mental health while sharing his own experiences in dealing with mental health.

I’d like to first talk about your artist name, Demo Taped— is there a story behind it?

Sure. Well when I was first looking into the music industry I saw that most label websites wouldn’t listen to unsolicited demos. Which are just demos sent from random people anywhere, but they mostly just go into the trash and I wanted to take something that’s associated with having no voice—these unheard demos— and I wanted to make that my voice.

If you had to pin down the genre of your music, what would that be?

I have trouble with it too, I usually go for a mix between electronic and RnB, but I don’t want to put a new genre name, which is short lived, usually… I just made what I wanted to hear.

Can you tell me a little bit about your creative process— what is making a song like for you?

Well it changes all the time, but when I was making Momentary, my new EP, I wrote this in a sort of stream of consciousness way: all these fears and beliefs, kind of everything that just made me tick. I wrote it all down in a notebook and I took it with me to the sessions I had and that became the playbook that we went off of! It was my attempt at being as honest as possible and just an open book. I didn’t want to be closed off or be this larger-than-life character, I wanted to be approachable and open. That’s the main thing I want. And as far as the production of it goes, I usually start with drums and a lot of synth stuff.

So this is entirely your project for the most part?

Yes, I do have a few people I’ve co-written songs with and a few co-producers on certain tracks.

I read somewhere that you meditate and journal frequently. As a musician, how did you make the jump from expressing yourself in a private way to creating a entire production around it?

Right, right… For me, it’s always about connecting with the audience, that’s the biggest thing— relatability. Saying things that aren’t only true for me but things that other people go through. And it wasn’t really that hard for me, I’ve always been an open person. I’ve talked about my own feelings and mental health issues before, and I think it’s important. To not talk about that kind of stuff given the voice that I’ve been given— it would be a disservice to other people.

Was there ever a single moment in time where you thought, this is it, this is the path I want to go down? How did you get here?

Well, when I first got into this, the first thing I released was an EP called Heart. I was still in High School in the 11th grade, and I just released it in the school during the day. It might have been the gym or the cafeteria… Anyway, I got hit up by a lot of people; it started to get reposted and a lot of blogs picked it up. During that time I was on track to go to school for film, but after that I saw I had an opportunity to do something and people liked it. I thought I’d give it a try! I’ve always been a musician.

So that EP released before you graduated, and you found people were liking it and you began to pave your own way.

Yes, and it was cathartic for me at the time too. My then-girlfriend had just broken up with me at that time; it was my first real relationship. And it was hard on me. Heart was 3 songs that I wrote for her… but then I got broken up with. I wondered whether I wanted to keep going with it, but eventually I decided to finish the EP and I released the final EP on Valentine’s Day.

Yeah, this one is personal. The first EP was personal and about my feelings, but this one is more about the general anxiety about my life. There were just things that I wanted to get off my chest.

It’s a beautiful thing to see, because for having a song like “Insecure” you seem very secure on stage.

Having said that, was there an intention behind creating an upbeat sound around those lyrics?

Hm, it wasn’t exactly intentional. The lyrics are tough, they’re sad, you know? And to me, it speaks to the faces that people put on when they’re going through something. We all say we’re okay when we’re not. But I’ve always done it that way.

There’s a lot of tracks that stand out for me. What was the message behind, “Own it”?

So I wrote that around the 2016 election, and I saw a lot of people challenging each other, being negative. Specifically, I started hearing this word, ‘snowflake’ thrown around— which is supposed to be a term for a weak person. It’s weird. I saw a lot of challenges towards masculinity and I personally wanted to challenge that in my own way. It’s not directed at any specific person. And that’s where the lyrics come from, “You say I’m not man enough, but I don’t think you know what that means.”

So that’s the challenge.

Yes, because what does it really mean to be a man? You know, men cry. Like we have a very skewed way of gender and I don’t like it. That’s what it’s about. And “Own it” is about owning it: the way you are.

How do you think of what it means being a man?

Well I’ve had great examples of what it means to be a man through my father and my grandfather. My grandfather, who is a pastor, was around during the Civil Rights movement and was friends with Dr. King and that inner circle: Andrew Young, and others. They’d have dinner at each other’s house. And even from viewing him- I mean I’ve seen him cry, express emotion. I’ve seen my own dad cry and express emotion. It was never about ‘man up’.  I’ve never heard ‘toughen up,’ because they know that people are people. And it’s important to be a human being, nobody operates in a way where they can’t express emotion. So, what it means to be a man, for me— is to simply be. Just be who you are, go and live your life, as long as you’re not harming people, I can get down with that. There are no set things for me.

You’re an advocate for mental health. From your perspective, how do you fine-tune that conversation a little more?

It’s all about taking, bringing that to the forefront of conversations. Not being afraid of talking about it! I think talking about it is so important to break the stigma. I’ve dealt with it since seventh grade, and it’s been a part of my life. It’s something I’m so used to talking about by now.

One thing I’ve noticed is the music industry can be a liberating place to talk about those things. You mentioned politics earlier, which is obviously a different environment from the music industry. What would you say about reducing the stigma against mental health conversations outside of music?

Well I think just talking about it normalizes it, for sure. And I see that happening; I see a lot of big artists coming out and saying they deal with this or that. Kid Cudi for example tweeted he had to be hospitalized… and the outpour of love and acceptance, especially for a rapper with that kind of audience, surprised me to be honest. There wasn’t a lot of hate.

So talking about it is the first step. I really want to partner with an advocacy group; I want to do more for sure.