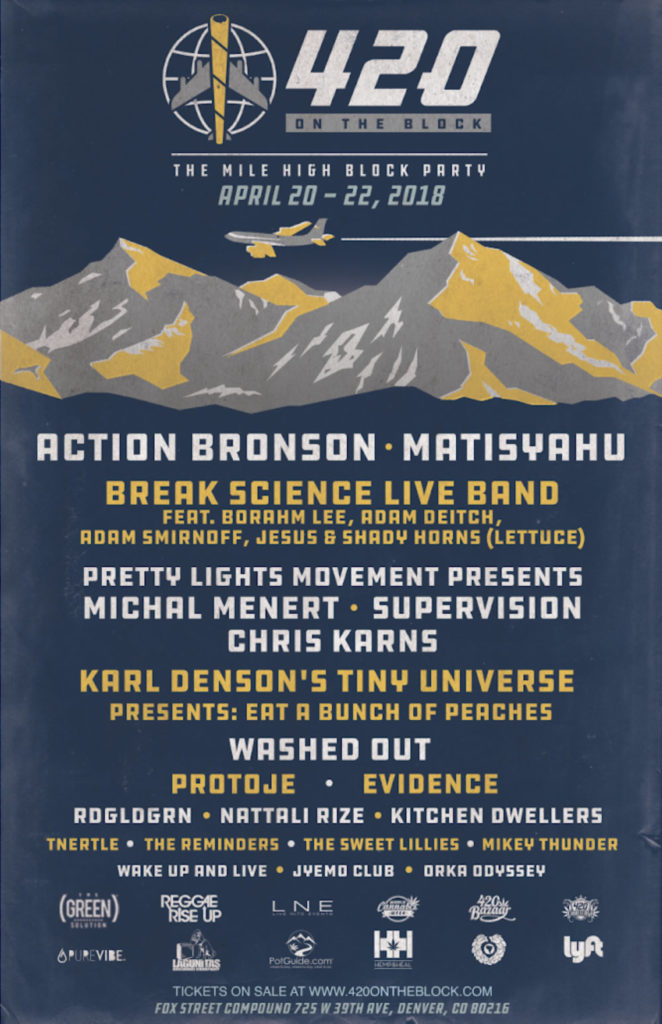 As the massive 4/20 holiday weekend approached Denver, there was a buzz in the air akin to the first day of Spring Break – so many options, and only a short amount of time to do it all. Luckily, 420 On The Block had every base covered from live music, art installations, MMJ vendors and more. Heading down to the Fox Compound, we were eager to see what the space would be like.

Kicking off the festival at the Blue Dream Stage, Mikey Thunder spun a mixture of reggae, funk, and hip-hop tracks at his 3 o’clock set. Mikey brought out Benjamin’s Vibe for the Party People banger, “The Road Less Traveled”, Ben’s infectious energy warmed up the chilly early birds. Mikey and the Party People were also joined by Colorado producer PHloEthik for their collab, “Funk Nasty”. The upbeat vibes that Mikey threw down were the ideal way to get 420 On The Block started.

After Mikey’s set, Chris Karns opened the Phaser Stage with style, spinning everything from deep bass to Action Bronson. While his set was a snowy one, the thick wubs kept the bodies moving through the cold. His abilities on the tables are second to none; Karns flawlessly cut tracks and synchronized his body movements to perfectly align with the tempo of his beats. His set with Supervision later in the evening was also a banger and featured slightly heavier bass music with less hip-hop tracks. 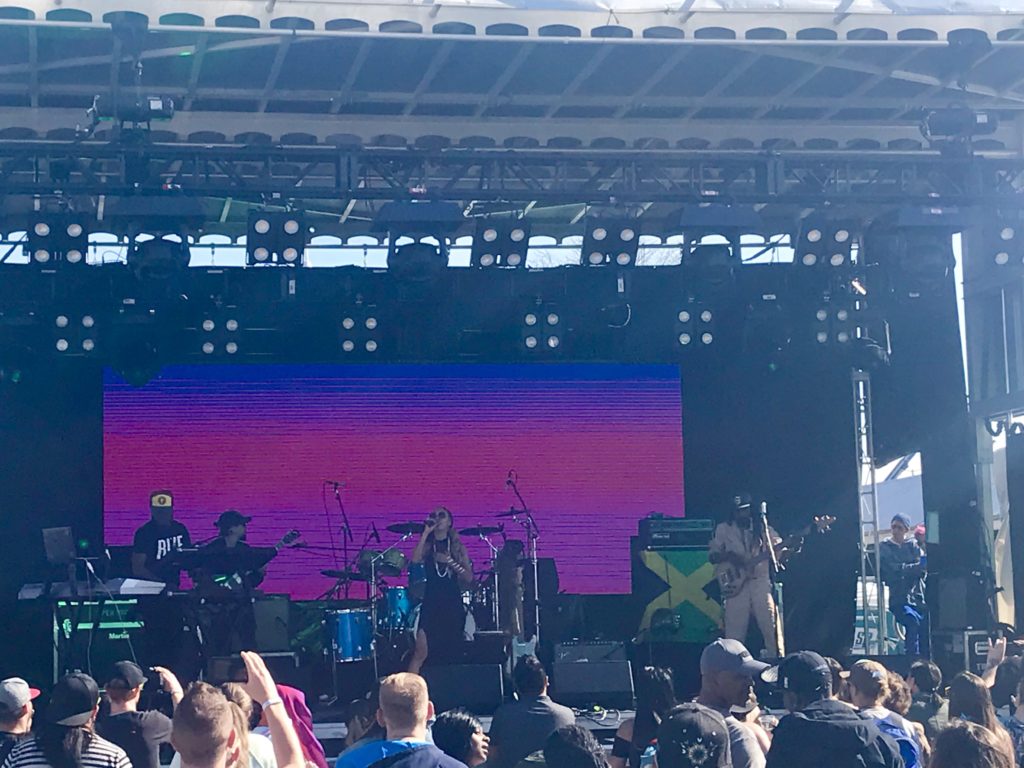 Karl Denson’s Tiny Universe took over the main stage after Karns. The soulful jam-funk that ensued drew in an audience formed by fans of a wide selection of genres. Being well outside of the electronically influenced acts that day, Denson’s Allman Brothers tribute was well appreciated and respected.

We enjoyed most of the set from the Pure Vibes booth, I was able to learn more about their vape pens and variety flavors. After hearing about their extraction and flavoring process, I picked up a Pina Colada pen after the festival and was not disappointed with the flavor or potency.

Next to take the Phaser stage was Michal Menert. One of the original members of Pretty Lights, Menert’s soulful glitchtronica was felt in the heart of every listener. Playing tracks from across his musical spectrum, he delivered songs from all over his discography – he even grabbed the mic and delivered some of the hardest bars that were spit throughout the entire festival towards the end of his set. Another highlight from the set happened when he dropped “The Same Disease” off of Even If It Isn’t Right; the flavorful track had the entire crowd vibing. Another favorite from the set was “Your Ghost”, a tribute to Menert’s late father.

Headlining night one, Denver duo Break Science were joined by Lettuce members Adam Smirnoff,  Jesus Coomes, Benny Bloom and Ryan Zoidis (the Shady Horns). The introduction of live horns into Break Science’s set brought an entirely new element to their live sound. Playing hits from their new album Grid of Souls, the electric feeling in the air ignited the energy in the crowd and kept the party moving through the cold night. Hearing “Android Love” with the live band was definitely one of my favorites that they dropped, as well as “Anthemy Mason” which is always dope to hear live. The Break Science crew left nothing to be desired and kept the energy high enough to barely notice the freezing temps. 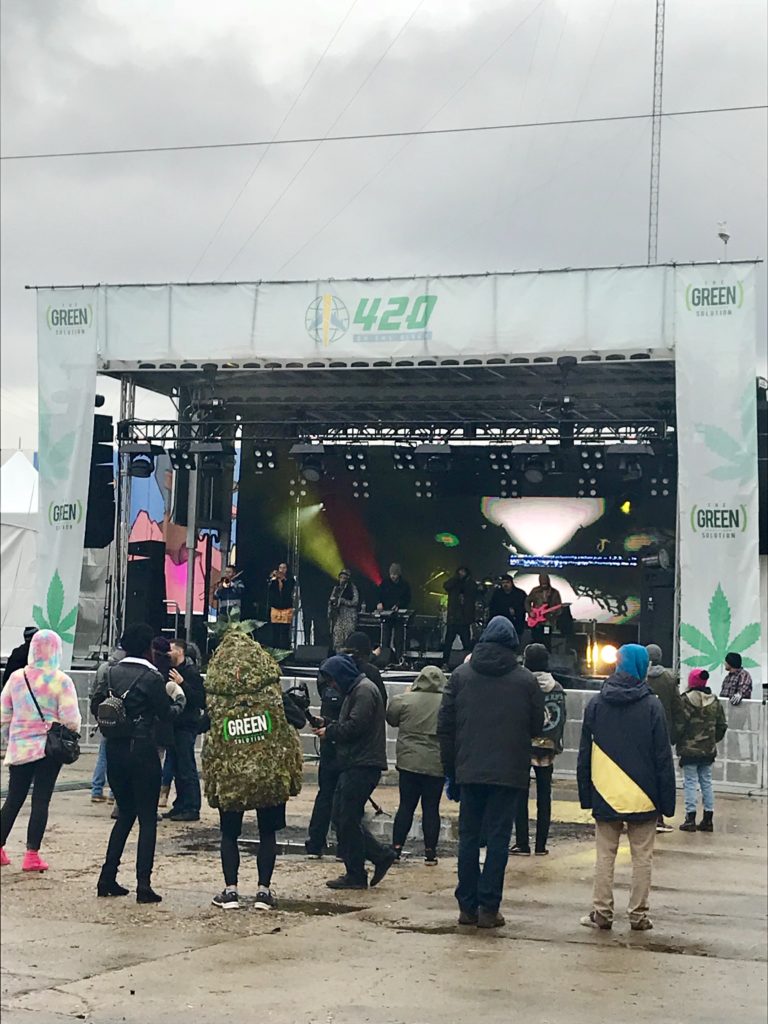 Showing up early on Saturday, grey skies greeted attendees but spirits were still high to say the least. The outdoor art gallery gave us shelter to admire live murals, and the assorted heaters were even more appreciated. We feasted our eyes on work by artists like Wanderweird, Casey Kawaguchi, Dice 51, and more. Hitting the vendors, we came across a large variety of CBD products, vaporizers and glass. One booth in particular, Hemp and Heal, were a unique company that we definitely took an interest in. Inviting us to hang out and warm up, we were able to sample a few of their products, including their CBD infused honey and gummies.

Hemp and Heal also had a great location – from their booth we were able to get a perfect view of Tnertle, who hit the Phaser stage early. Each member rocking out in their individual styles, Tnertle really brought the heat during their set. They’ve been rolling around the Colorado funk scene for some time now, but I feel like 2018 will definitely be a huge year for them. Guest rapper Looney Ando gave new life to their songs, and we hope to see them collaborating more.

Washed Out brought enticing visuals and colorful synths, and although it was nearly freezing, the crowd packed in to dance and keep each other warm. Having been a fan for years but never seeing them in concert, it was a sweet treat to hear “Feel It All Around” and most of their latest album, Mister Mellow, live.

Headlining the night, Flushing Queens’ own Action Bronson brought his signature saucy flair to the Phaser Stage. Dropping selects off of his most recent two albums, Bronson came for our heads with tracks like Baby Blue, Actin Crazy, Bonzai, and many others. Halfway through the set, Big Body Bes called on FaceTime; Bronson told him to stay on the line – ‘Yo Body, hold on – I’m gonna hold you in my hands for this next song’, and proceeded to drop their collaboration, “Durag Vs Headband” keeping Big Body upright on the iPad the whole time. Bronson even dropped one of his most popular bangers “Contemporary Man” from Blue Chips 2, in which he raps over six separate instrumentals in the duration of a four minute song. The performance was legendary, as one would expect from Bronsolino himself.

Nattali Rize were the perfect band to kick off the Sunday reggae vibes, and with the sun finally making an appearance for the first time over the weekend, its’ warm rays felt heavenly. The bands’ raw energy combined with Nattali’s beautiful voice had us feeling a No Doubt vibe for sure. It was my first time listening to this act, and I definitely plan to dive into them more.

When Protoje hit the Phaser stage in the early evening, the sunny weather meshed with their inviting sounds in a harmonic sensation of music and movement. Throughout the set, the energetic group bounced around, spreading their message of positivity, love, and smoke. Closing out their set with one of their more well known songs, “Who Knows”, Protoje put on a show that won’t be soon forgotten. 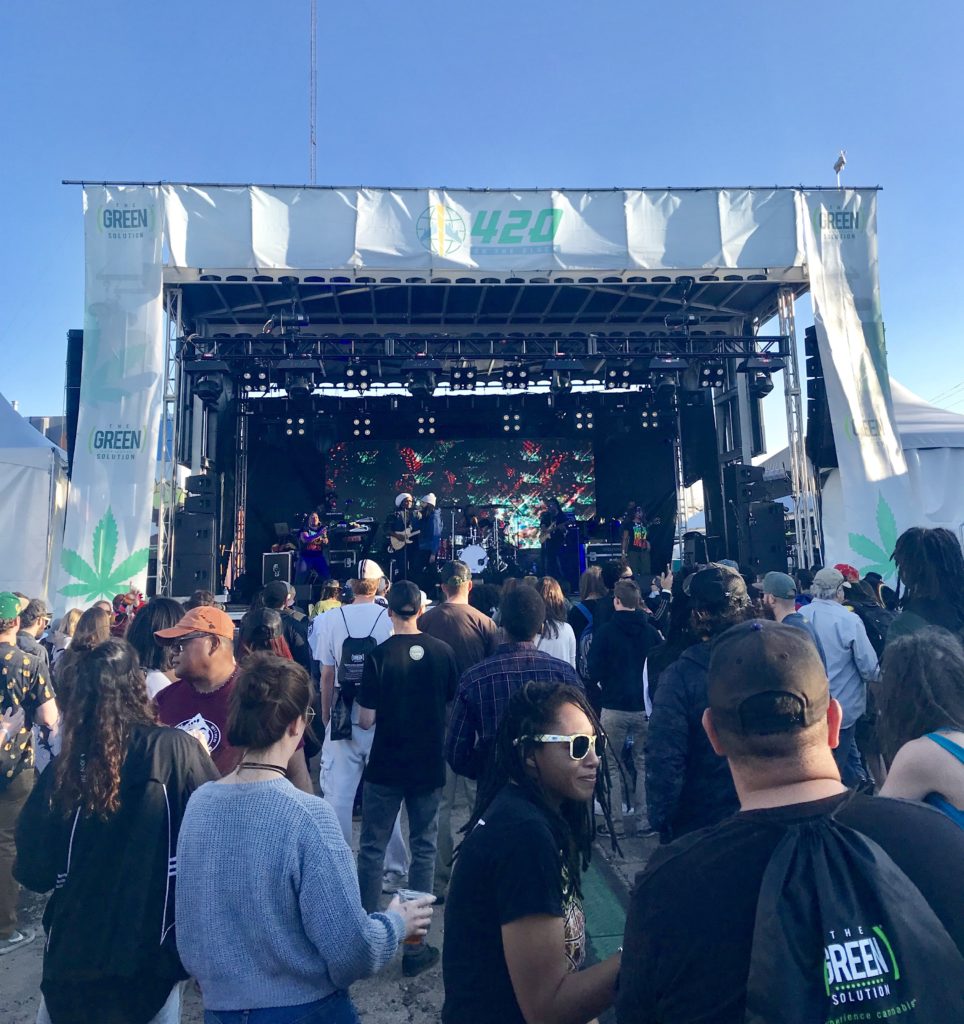 Closing out the Blue Dream Stage, Rdgldgrn’s heavier rock sound was a nice alternative to the vibey, relaxed reggae that had been present throughout earlier performances. The upbeat style was the perfect way to keep the audience engaged and moving as the sun set and the evening cooled off. The Reston, Virginia trio melds genres such as reggae, hip-hop, rock, and go go music. Their proximity to D.C. no doubt has an impact on the melting pot of styles that the group plays.

While the temperatures were often dropping below the preferable level, the music, art installments, and weed themes made this festival totally worth the ticket price. Every year, 420 On The Block gets bigger and bigger, and we’re stoked to say we were apart of their best installment yet.