Well known and loved within the visionary art realm, Morgan Mandala emanates an otherworldly talent through her unique squiggles on various mediums.

During the on-site collaboration of a yet-to-be-named piece at Electric Forest last summer with Randal Roberts, Sweet Melis and Krystleyez, we experienced her charismatic energy in the moment. This work illustrates a story of oscillation between pattern and novelty that we find to be delightfully intoxicating. It is a story that heightens the senses and invites our attention.

Recently hosting an exhibit opening at the Phil Lewis Art Gallery in Boulder, Morgan’s work continues to inspire viewers and cultivate wonder and deep thought. We were pleased to be given some of her time with this interview and are excited to share her work with you all. Read on as we talk about Morgan’s cultural influences, favorite collaborations, developing her own style and much, much more. 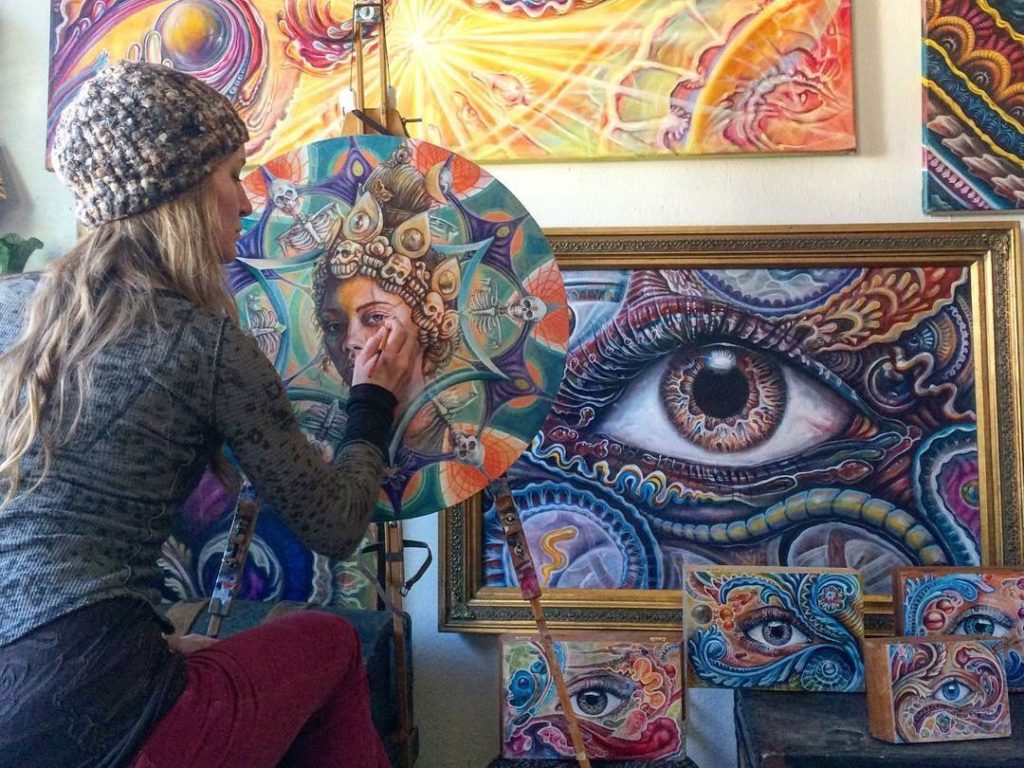 CYM: Growing up in Chicago and now living in Boulder, are there any specific cultural influences that you’ve seen incorporate themselves in your pieces?

Morgan Mandala: I’ve found the general population of Colorado to be more open-minded, supportive, and less competitive than Chicago.  I believe that the surroundings in Colorado attribute to the cultural difference as well. Here in Colorado, the land dominates our lives much more than Chicago.  The mountains loom over us with their majestic beauty, and the possible force of destruction (thru floods, fires, etc.). I think the general attitude of the human population here is humbled by and more connected to the land.  I believe that connection is rejuvenating for people, especially when so much of life can be dominated by man-made structures and society.

The ancient, rugged, and beautiful land of Colorado as well as the open-minded population have definitely influenced my work.  Many of my paintings include the various ancestor-like faces in the rocky landscapes, and the big skies. The relaxed culture has allowed me to feel like I can express myself in a less restrained fashion.

CYM: How have your travels influenced your art works in general?

MM: My travels have influenced my art both visually and conceptually.  I am always inspired by the art and symbolism of cultures. My sketches and photos during my travels many times end up in my paintings.  I’m very interested in trying to understand the philosophies and ways of life of many cultures throughout the globe, and being immersed in a different culture is the best way to get a taste of what they’re all about. Discovering the many ways that people view the world, art, and go about their lives has opened up my frame of reference, and also revealed common threads.  I often create paintings based on mythical stories, beings, and the common threads that weave together archetypes of the world.

CYM: What have been your favorite artistic collaborations so far?

MM: That’s quite a difficult question!  I’ve had the great pleasure of working with a great deal of talented artists… I always love collaborating with Randal Roberts as it is seamless, fun, and nearly effortless.  Other recent favorites are the collaborations at Electric Forest with Krystleyez, Sweet Melis, and Randal Roberts, as well as the recent Threyda Collective collaboration created at Artwork Network in Denver with Peter Westermann, Brian Scott Hampton, Seth McMahon, and Randal Roberts.   The large murals that came out of these sessions had no plans besides a color scheme. It was incredibly rewarding to be able to flow with and embellish what other artists are creating right beside you. I think these murals work so well because we are all friends who trust each other’s vision.  The project itself becomes bigger than any individual artist, so we surrender to whatever may happen, and have fun. 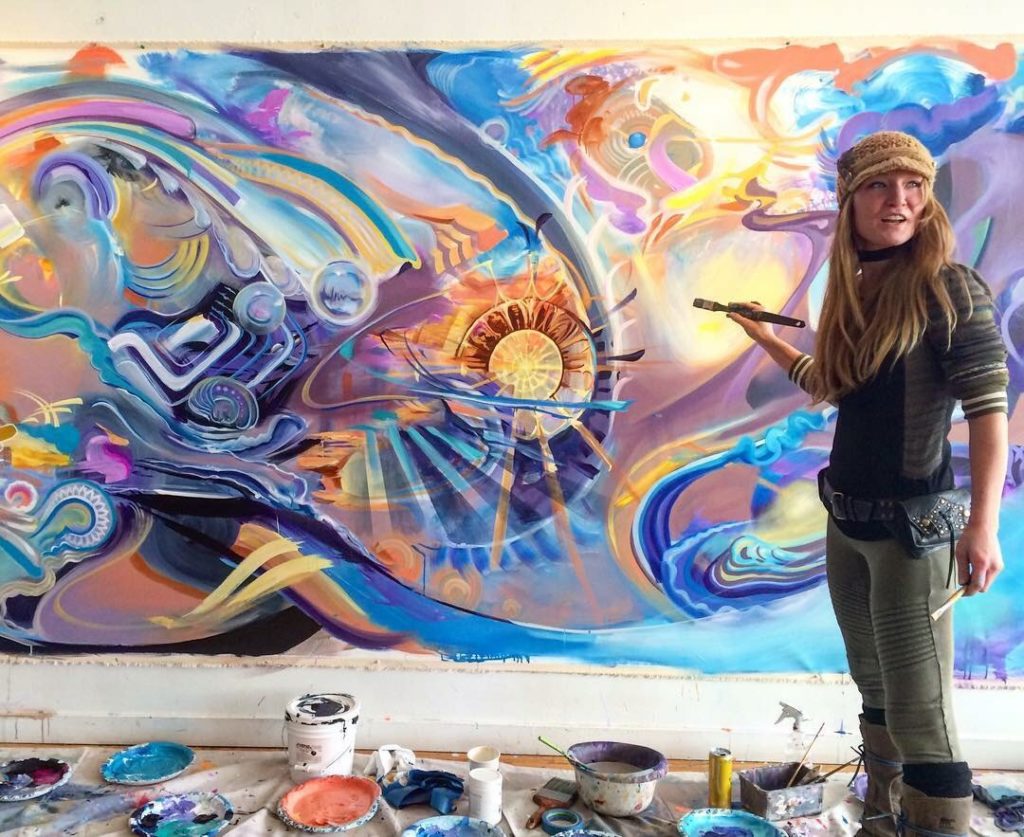 CYM: As your career flourishes, what major changes has your artwork undergone since you first began?

MM: When I first started to get serious about painting in college, I wanted to combine geometric forms with naturalistic objects, or as I liked to say, create “geometriscapes.”  I was told by professors that at that time I should choose between abstract and naturalistic. Since I had never made abstract art before, I started making simple mandalas and focusing on color relationships.  I abandoned reference for some time, and tried to get used to the medium of acrylic paint.

Now, I feel like I’m more freely able to combine geometry and geometric symbolism with naturalistic forms.  I feel like I have a deeper understanding of how and why these forms go together in each of my paintings, and I have been able to re-incorporate the part of painting things from life and using reference that I have always loved.  My work is now a combination of spontaneity and planning, and I wouldn’t have it any other way! With each new painting I hope to evolve my style and continue to grow as a painter.

CYM: We know in your Portal Series paintings with Randal, the illumination of light in the portals is “the One,” or your “true Self,” and the swirling forms around the light are the illusions – fascinations, impressions, and absurdities of life – that may distract from the light. How does this dynamic affect your color scheme?

MM: The Portal Series paintings are all live paintings, which means they were created on-site during the weekend of an event or festival.  Just as a person develops their own style, personality, interests, and distractions, I feel like the portals take on a personality of their own based heavily on the vibe of where they were created.  The overall feeling of each festival/ event directly influences the color and shapes in the Portal Series. 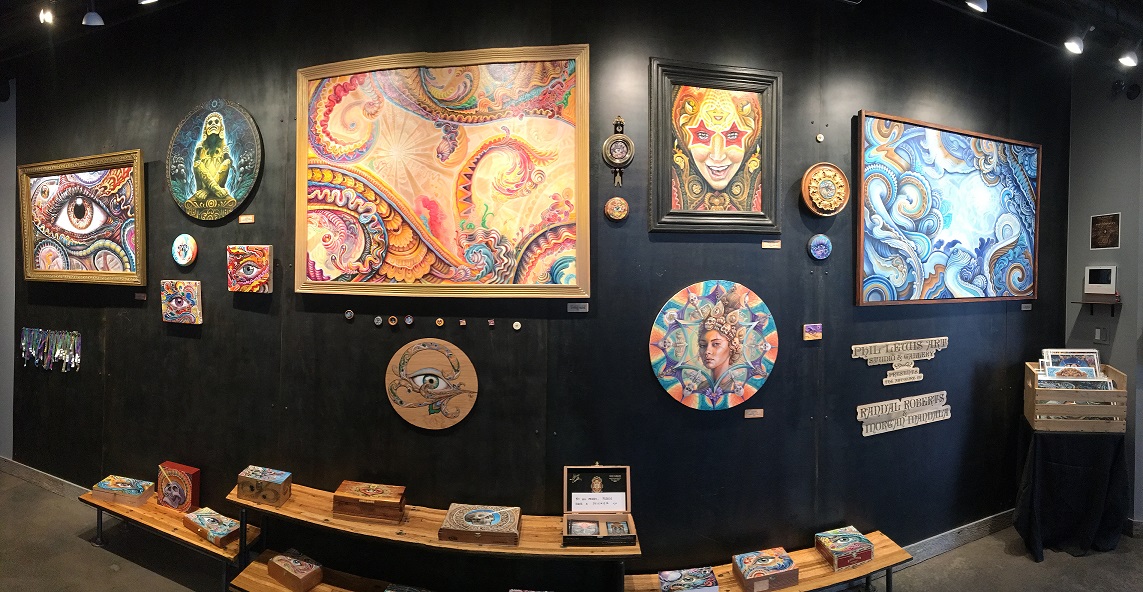 MM: This is a difficult question for me because inspiration and creation come from so many different places… I’ve found that many productive times are brought on by strong emotion.  This could be a feeling of joyous inspiration, or a desperate attempt not to feel defeated by sadness. Both can be equally potent. Though quite painful, transmuting sadness has been quite a powerfully productive force throughout my lifelong relationship with art.  These feelings and transmutations appear in my art conceptually through much of my work. I discover the meaning of the painting while simultaneously discovering that reflection in myself and others. Painting becomes like an alchemical practice, where the refinement of the painting mirrors the refinement of what’s going on inside myself.

I’ve also found that performance painting can be incredibly productive because you don’t have time to over-analyze what you are doing, so creation is allowed to move forward freely without judgement.  I paint best when I am not specifically thinking about what I am painting, but get into an automatic flow of the brush touching the surface.

Less productive times, for me, mostly stem from being ungrounded from daily practices or overactivity (too much travel, not enough rest).  I think balance and discipline are things that keep me productive as an artist. The most important thing is showing up to paint everyday, ready for inspiration to meet you, and continuing to be there, even if it doesn’t. 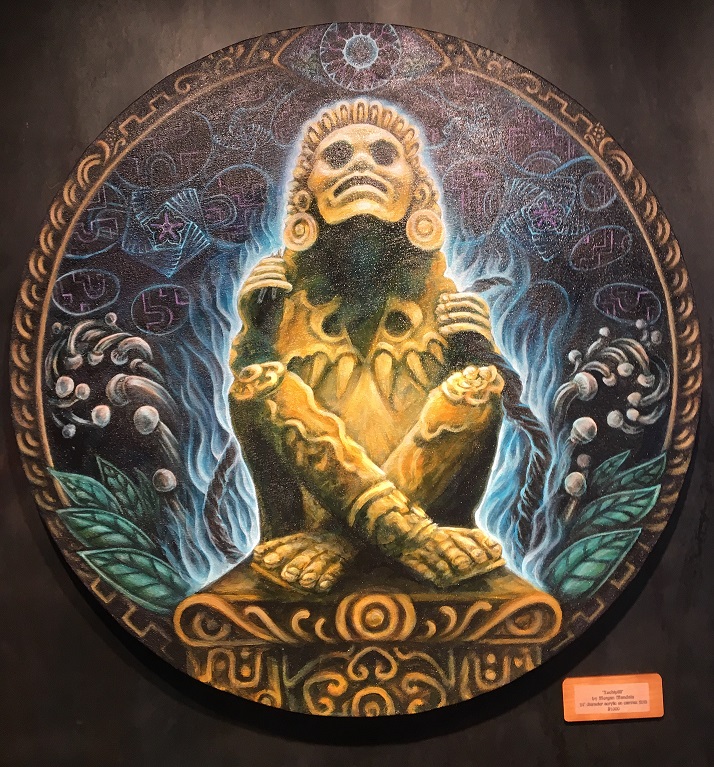 CYM: Xochipilli is featured in this gallery, an Aztec God of creativity, music, poetry, and flowers (psychotropic plants). Being that many other well known visionaries have been the center of your works in the past, what do you think of the term muse? How has this developed organically?

MM: I think the term muse is appropriate in many ways to describe the role central figures in my paintings because they often personify a group of ideas or feelings that I’m portraying.  This has developed through different avenues… Occasionally I will begin a painting with an idea or “muse,” and a story develops surrounding that idea. This would be the paintings that start with a “vision” of what they’re going to be. Other times paintings begin with abstract flow, and I try to allow the subject matter or “muse” to come forward through the creation of the painting.  The ladder process often takes longer, however the story and muse that eventually guides the painting is often more potent and exciting to discover.