Nestled on a bustling street in Fremont, a historically cultural neighborhood boasting some of Seattle’s finest eateries and breweries, the Nectar Lounge is perched on a busy intersection and beckons with its large fluorescent green sign.

It is a dry and chilly Sunday night as the Nectar Lounge welcomes The Russ Liquid Test along with Willdabeast and Defunk to its intimate space. Patrons are greeted by the warmth from the fire pits that emit a glow illuminating the wide expanse of the lush outdoor patio. The craft cocktail menu provided by three full service bars along with the upstairs mezzanine overlooking the main floor draws a crowd early before Willdabeast’s opening act. The space is small, but the stage is large – giving a sense of being up front and close no matter where one stands.

Willdabeast ignites the evening with a thunderous opening from their horns. The night was then underway with an electro funk soundscape using a combination of horns, synthesizers, and bass giving a good sense of the overarching sound that would echo across Fremont neighborhood all night. Defunk followed by parting ways with the live brass to deliver a mix of heavy bass that was layered with hip hop, jazz, and funk. The crowd erupted in kinetic energy jumping and bumping around when Defunk played the universally recognized club song “Let me clear my throat” by DJ Kool. It was these moments of throwbacks interlaced with Defunk’s own sound that kept the energy flowing through the night. Willdabeast at one point came back on stage to provide the sound of their horns.

One member in the crowd was so captivated by the performance that at various moments, he would present and offer the bonsai tree he was dancing around with to the band. The wooden bars surrounding the stage filled up with drinks, both empty and full, faster than the staff could scoop them up as the crowd gathered deeper around the stage.

The evening belonged to the Russ Liquid Test and the full capabilities of the Nectar Lounge’s production is displayed as the shifting lights on the disco ball overhead complimented the Acid Test inspired backdrops melting visually on the stage. The aesthetics of the Russ Liquid Test are a nod to the Electric Kool Aid Acid test from the counter culture days of America with its dripping and kaleidoscope visuals and with today’s high def screens, the visuals really captured one’s gaze as its trip inducing colors captures you. It became more than a live concert and took on a form as unique and diverse as the sound being presented. The disco ball lights reflecting an assortment of colors swirling around bounced off the garage window that acted as a wall adjacent to the stage, giving a sense of a larger space being occupied. 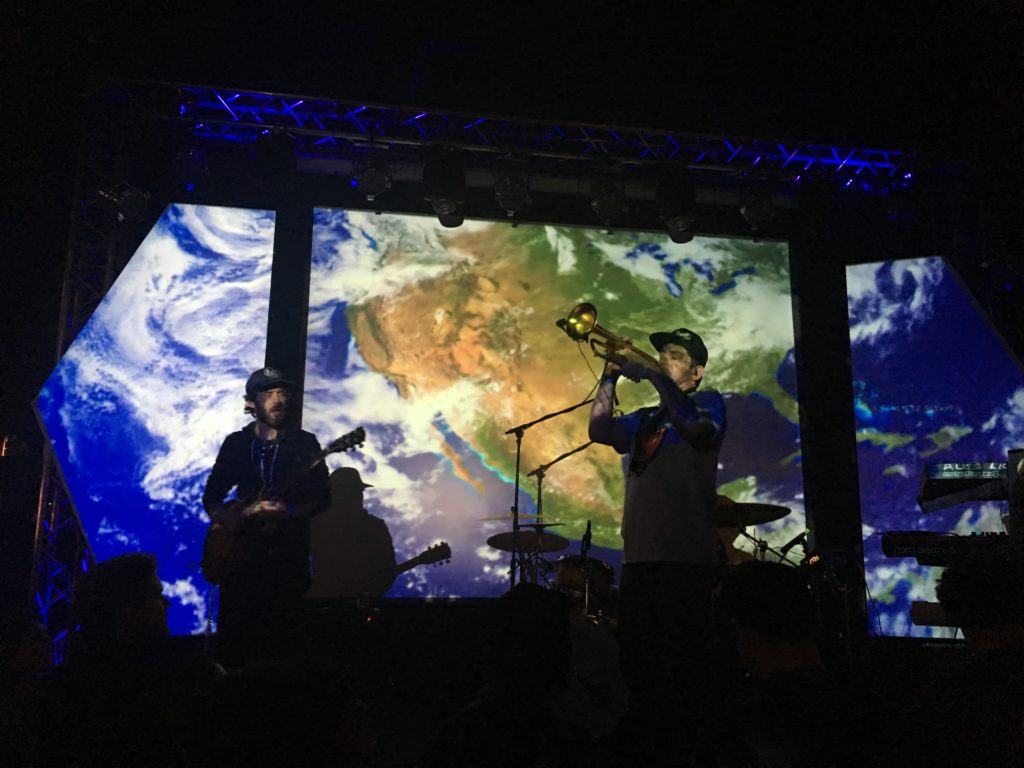 Brass specialist Russell Scott bounced between serenading the crowd with the horn to mixing to even adding his autotuned vocals. The tonality and diversity of sounds was always fresh as he bounced between trumpets to keyboard to vocals to other instruments inspired by the New Orleans Jazz scene. There were moments when the dancing and the mood got slow and seductive as guitarist Andrew Block took over for a sensual solo reminiscent of sounds finding inspiration from Carlos Santana. Drummer Deven Trusclair was engaged in the task at hand of providing the percussion that in some moments his eyes rolled back caught in the deep flow of his work. The show provided an entertaining and funky night for its patrons and made the Fifth of November one to remember.