The other day, I saw a show that genuinely made me feel  –  all the feels – as one could say. It was a tribute to David Bowie by Brazilian artist Seu Jorge at the Chautauqua Auditorium in Boulder, Colorado.

For all my love for the music of that era, I got into Bowie very late yet, once I did, I was absolutely enthralled — I couldn’t get enough. I kept mentally scolding myself for being oblivious to his musical genius for so long…but at the same time I was stoked to discover it all. I often say that ‘my favorite new music is actually old music that I haven’t heard yet.’ Admittedly I still haven’t gone through all of it, but I have dedicated a lot of time to his earlier works, listening to albums like The Rise and Fall of Ziggy Stardust, Hunky Dory, and Diamond Dogs over and over again. Simply listening to the fantastic arrangement of a song like “Moonage Daydream” is enough to make you high.

The story of the tribute show starts with the Wes Anderson film The Life Aquatic of Steve Zissou in which Seu Jorge plays the character Pele dos Santos. As with other members of Team Zissou he is always in a red stocking cap and light blue uniform with Adidas sneakers. He is in almost every scene, though has few lines of dialogue and is instead often with his acoustic guitar playing his Portuguese adaptations of classic Bowie hits such as “Life On Mars”, “Rebel Rebel”, “Changes”, and “Starman”. The songs make up a majority of the soundtrack and were later recorded as an album, duly named The Life Aquatic Sessions. Bowie even went on to thank Seu Jorge for giving his songs “a new sense of beauty.”

After opening the concert with his samba-style take on Rebel Rebel, he began to weave the story of how the show came to be; and how he was first introduced to the world for his performance in the Brazilian film City of God which, in turn, led to his being called for the Life Aquatic. Like other actors in City Of God, Seu Jorge was born and raised in a favela in Rio de Janeiro. His versions of Bowie’s songs aren’t straight translations, they are original renditions with the lyrics echoing some of the meaning of the original songs but with events from Seu Jorge’s life.  In his version of “Ziggy Stardust” he even sings, “Eu quase morrer de fome mas hoje estou bem. (I almost died of hunger but today I’m ok)”.

When he was first called by Anderson’s team they asked if he knew David Bowie: He said he knew a few songs like “Let’s Dance”, but added, “If you grow up in a favela in Rio de Janeiro, you don’t grow up listening to rock n’ roll.” Ultimately he agreed to do the film and told them to send him a list of songs to learn.

Upon arriving in Italy, where they would be filming for 6 months, he felt a bit overwhelmed upon meeting the rest of the cast and, although he recognized all of their faces, he couldn’t remember or pronounce their names. When he met William DaFoe, he said, “Oh hey man, Platoon!” He also wasn’t fully prepared, for on the very first day Wes Anderson asked him if he would be ready to film “Rebel Rebel”. He said, “Oh yeah, of course man. No problem.” He then scrambled around finding a pen and paper and retreating out of sight to learn the song which, he says, was done in about 40 minutes. 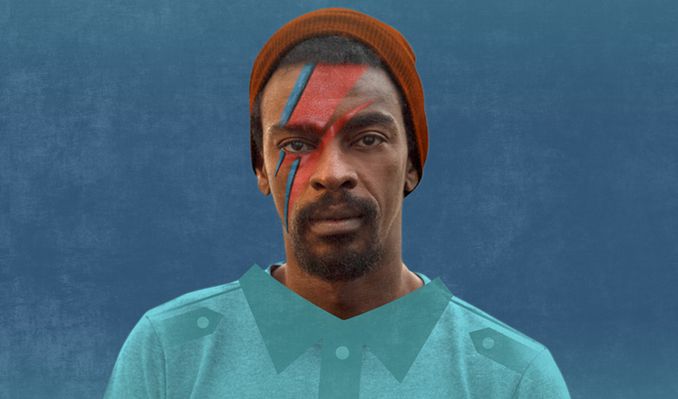 All of the songs were brilliantly performed and regularly had me on the verge of tears. The stage was simply decorated with aquatic props and the lighting, while incredibly professional, was also simple and with little variation aside from occasional appearances of Bowie’s face projected behind the stage. Shortly after the show started I had a strong urge to pee, but I thought I would rather be damned than miss a second of this show — better to hold it for the next two hours.

About halfway through the show, around the time he played “Space Oddity”, things became a bit more solemn and emotional when he talked about Bowie’s death. Seu Jorge’s father actually died three days after and he revealed that, “it was a very tough week for me. To lose both David Bowie and my Dad, two men who both gave me so much.”

He then said he wanted to thank us, the crowd, for coming and supporting him and that the show was dedicated to us, his father, and Bowie. He carried on beautifully and had everyone’s rapt attention for the remainder of the show culminating with a five-minute long standing ovation. The evening finally ended with a black and white portrait of Bowie behind the stage and then a slideshow of various photos of Bowie throughout his life and still images from the film. Everyone in the crowd was clapping, screaming, cheering and crying. It was perhaps the most beautiful show I have ever seen.