Riot Fest stomped its way through Chicago’s Douglas Park on September 15-17th and reaffirmed its stand as one of the country’s most original and sought after music festivals. Bringing Punk, Industrial, Rap and Rock heads together to mosh in one place at one time in a Carnival-style atmosphere with a skylined backdrop certainly made for a memorable experience. But with the festival bubble bursting and fly-by-night events here one year and disappearing the next, what makes Riot Fest a powerful, seemingly unbreakable force that continues to draw attendees worldwide for over a decade? This year’s event shined a light on what sets Riot Fest apart from the other wannabes: 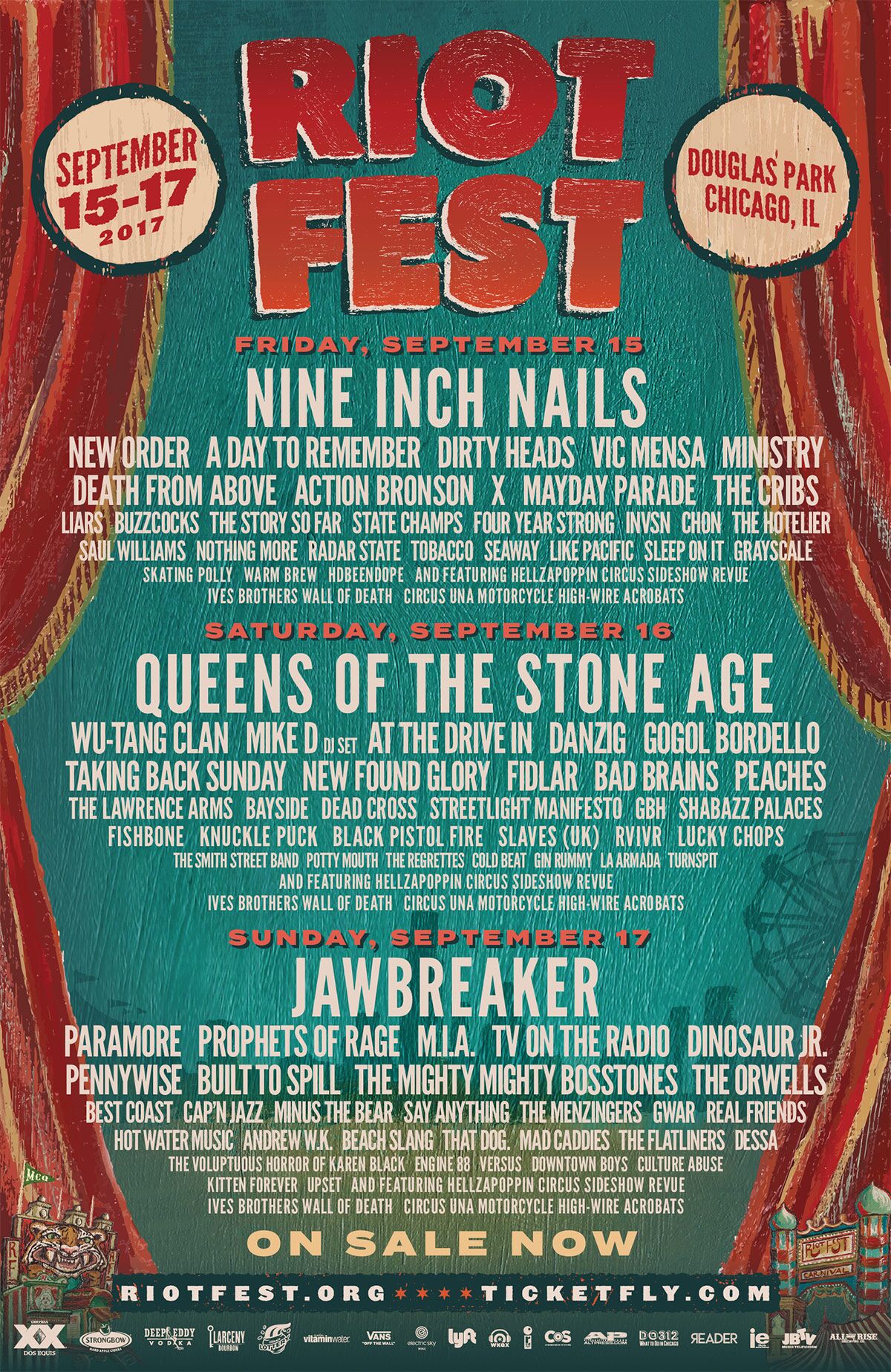 Walking around the sprawling festival grounds one could look in any direction and be surrounded by an abundance of leather or jean studded jackets, black knee high boots and wild hairstyles including some mohawks over a foot tall. Look through that and find some independently delicious food vendors including a Riot Feast food truck. Gaze to the other side of the greens and see an assortment of Carnival rides including a Ferris Wheel, the Zipper, Swings and some extreme varieties of the classic Tilt-A-Whirl. Even if the rides, food and non-stop music from noon to night weren’t enough, Riot Fest added something a bit different to the lineup. Three times daily attendees could stroll under the small tent tucked in the corner for Hellzapoppin Circus Sideshow. Here crowds were stunned all weekend by an assortment of acts including a magician who swallowed razor blades and a body modification artist who swung bowling balls suspended from his eyelids. Simply put, Riot Fest provided stimulation for inner youth nostalgia and underground attitudes alike.

Speaking of nostalgia, this year Riot Fest provided enough of it to give Generations X and Y musical wet dreams. Riot Fest compiled Warped Tour Alum such as A Day to Remember, Four Year Strong, New Found Glory, Taking Back Sunday, Paramore and Pennywise who provided high-energy sets and proved they’re still relevant while Golden Age Lollapalooza Headliners like Nine Inch Nails, New Order, Queens of the Stone Age and Wu-Tang Clan reminded everyone why they continue to be a huge influence on the underground music community. As if grouping these diverse veterans of rap, rock and punk wasn’t enough, Riot Fest has been known to reunite bands that haven’t played, or even spoken to each other in years. Who could forget the epic reformation of the Original Misfits last year? This year the jaw-dropping reunions continued with the return of Chicago-based emo outfit Cap’n Jazz and underappreciated punk pioneers Jawbreaker, both of whom absolutely blew the audience away with electrifying sets. No other festival couples such sound diversity with deep musical roots quite like Riot Fest.

Many of the bands listed on this year’s lineup have been around for decades. Some of the bands have been maturing in the scene together, often times having shared the stage in years past. Most draw influence from one another to this day. This fact was ever present and vocalized at this year’s festival. A number of musicians gave thanks and positive shout-outs to other bands playing throughout the weekend. This displayed a strong sense of appreciation and comradery one doesn’t often see at other events. Whether it was the Mighty Mighty Bosstones taking a moment near the end of their set to give a shout to punk rock contemporaries Hot Water Music who played earlier that day, or a GWAR member coming out side-stage during an evening Pennywise set, or even legendary Reggae/Punk fusion outfit Bad Brains bringing Lamb of God vocalist, Randy Blythe, out to fill in on a few songs: it was clear the Riot Fest community was strong. This obvious respect shown among the artists ultimately heightened the crowds respect for the bands playing and the festival overall.

Despite having to cut back dates over the last couple years due to internal organizational issues but if Riot Fest can keep up this rocking recipe, there is no doubt the festival will continue to grow and be featured in more cities nationwide. For those who like their music raw with a splash of fun and a whole lot of history, Riot Fest is the perfect place. Looking forward to the wild surprises and epic talent Riot Fest has in store next year.