To get everyone on our level of stoke for the ninth annual Utopiafest we compiled a list of the things we love most about this intimate gathering nestled in the rolling greenery of the Texas Hill Country. We asked Utopia vets, Facebook and our personal friends what their favorite aspects of Utopiafest are and here is the feedback we received. We cannot wait to boogie all weekend with 2,000 of our closest friends for Utopia’s last year at the magical Four Sisters Ranch in Utopia, Texas. The Pre-party kicks off TONIGHT with the Toubab Krewe at Empire Control Room & Garage and tickets are still available. Tickets for the festival, however, are sold out, so we will see you on the ranch September 22nd-24th!

Utopiafest fuses small festival vibes, an eclectic lineup of musical acts, a gorgeous venue and the best crowd around to bring everyone involved an unforgettable and magical weekend. Utopia vets say the atmosphere is unlike ANY other…a gathering based on community, family, helping others, giving back and having a damn good time.

The music does not stop at Utopiafest and this is can attributed to Austin Silent Disco and the handful of amazing people, artists and musical acts that stay up to keep the party rolling on. This year’s late nights are set to be the best  yet and we cannot wait to see what Utopia has in store for the silent disco this year. Highlights we cannot wait for: Cream Cheese Accident, Michael Garfield, Capyac, Willgood, Cloudchord & Fractala 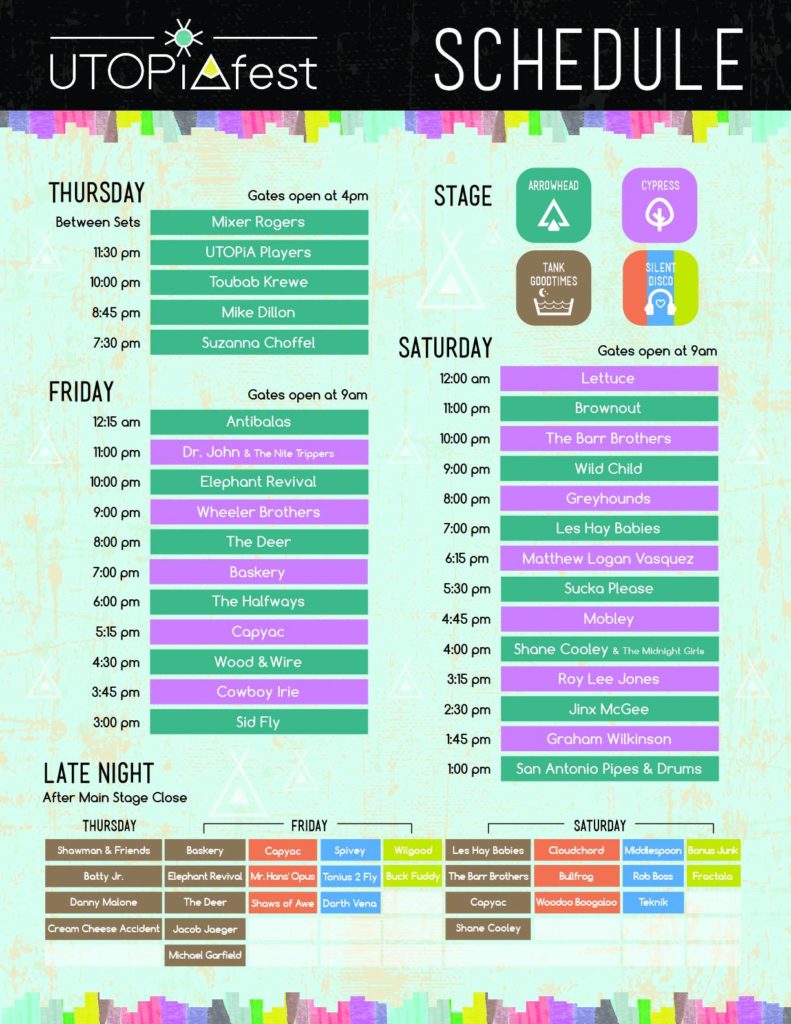 Not much to say about this one except that festivals that are BYOB are usually some of the best. Do not worry about waiting in bar lines, spending boatloads of money on booze or having to carry your ID with you everywhere you go, because BYOB shall set you free. Bloody mary mornings, Jameson gingers by night and the coldest coldies to keep your feet a-movin’ all weekend long. We do not forget the ones who do not consume alcohol as well, because BYOB entails Kombucha, coffee, juice, smoothies…BRING YOUR OWN BEVERAGE and don’t forget to share with your neighbor. *SPECIAL NOTE* NO GLASS is allowed at Four Sisters, so bring cans, use reusable plastic bottles and be conscious of the harm glass can cause.

Festivals that are capped at a certain amount of tickets make for some of the most intimate and magical experiences. By the end of the weekend, it’s possible you have met almost everyone there and that is something incredibly special. The capped attendees allows for more room to camp, dance and make stronger connections with ‘strangers.’ Don’t be afraid to put yourself out there and make new friends!

According to some of our most dedicated Utopians, the festival has a yearly airplane panty drop. You may be asking yourself ‘WTF is this?’ like I did when I was informed of this genius idea Utopia provides and it is just what it sounds like: a funkin’ panty drop from an airplane. Keep your eyes, ears and hands peeled, because we all know we can use a fresh set of undies, especially after being out in the woods for two days. 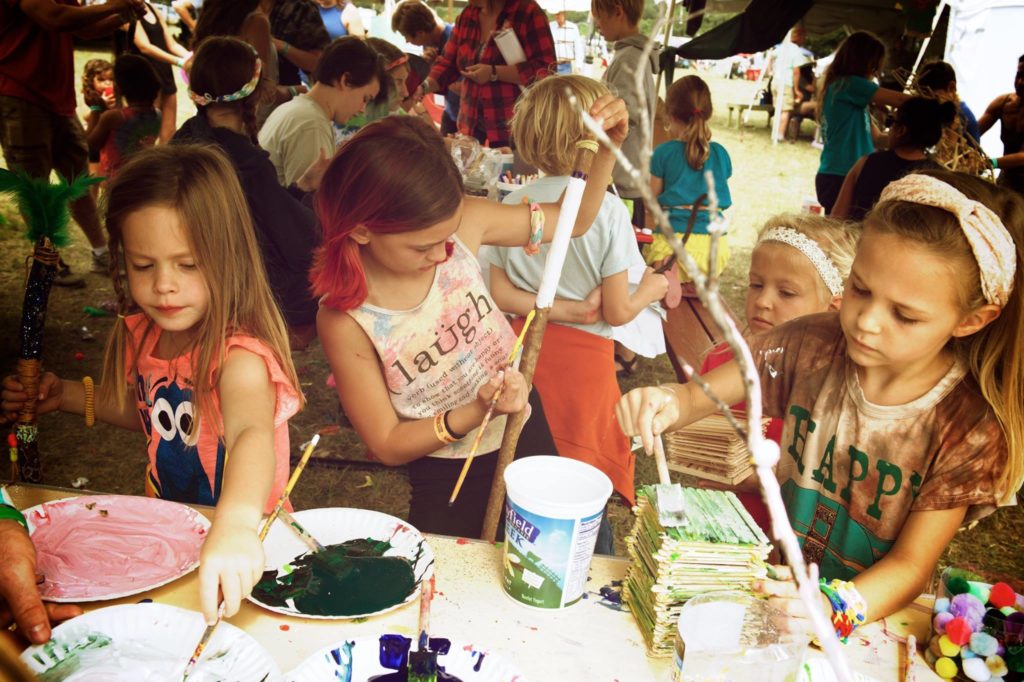 Utopiafest is a local family festival filled with some of the best music across all genres and we especially love all the Austin love on the lineup. Discover local bands you did not know existed or see your best friend play a festival set for 2,000 people. Either way, we support those who support local and Utopia provides luscious amounts of local love. Some local bands we cannot wait to groove to include Capyac, The Halfways and Batty JR.

Four Sisters Ranch is gosh darn magical and that is basically all there is to it. I have been to so many festivals around the States and from the word on the street, Four Sisters Ranch is one of the most beautiful and amazing venues around. We absolutely cannot wait to experience the magic for ourselves, especially because this will be Utopia’s last year at the venue *sad face*. 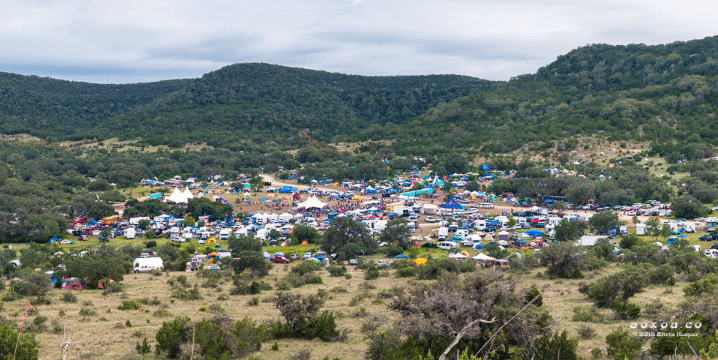 Utopia is known to have the world’s largest pizza oven. As put in the words of Andy Leonard, bass player for Trouble in the Streets: “One year I was talking with friends backstage and looked up up to see this 10 foot pizza get pulled out by a group of people and this dude with this crazy custom samurai pizza cutter just starts cutting it up like a ninja. Our minds are already blown when all of a sudden the panty plane flies right overhead and drops panties on us. We lost our ‘ish.” So make sure to gather your squad and order the largest pizza you will ever lay your mouths on. Don’t forget keep your eyes out for that infamous airplane panty drop as well.

Not much to be said about this aspect except ‘CHEERS!’, because the fact we can catch every set without picking, choosing or missing one, is a gosh darn festivus miracle.

Also a reasonably explainable aspect and maybe a little biased due to the fact that Lettuce is my favorite band, but the funkiest cats around will be gracing the stage Saturday night after Brownout. I do not think I have ever been more excited for a Lett set in my life. See you on the rail, funky friends! Lettuce rage! 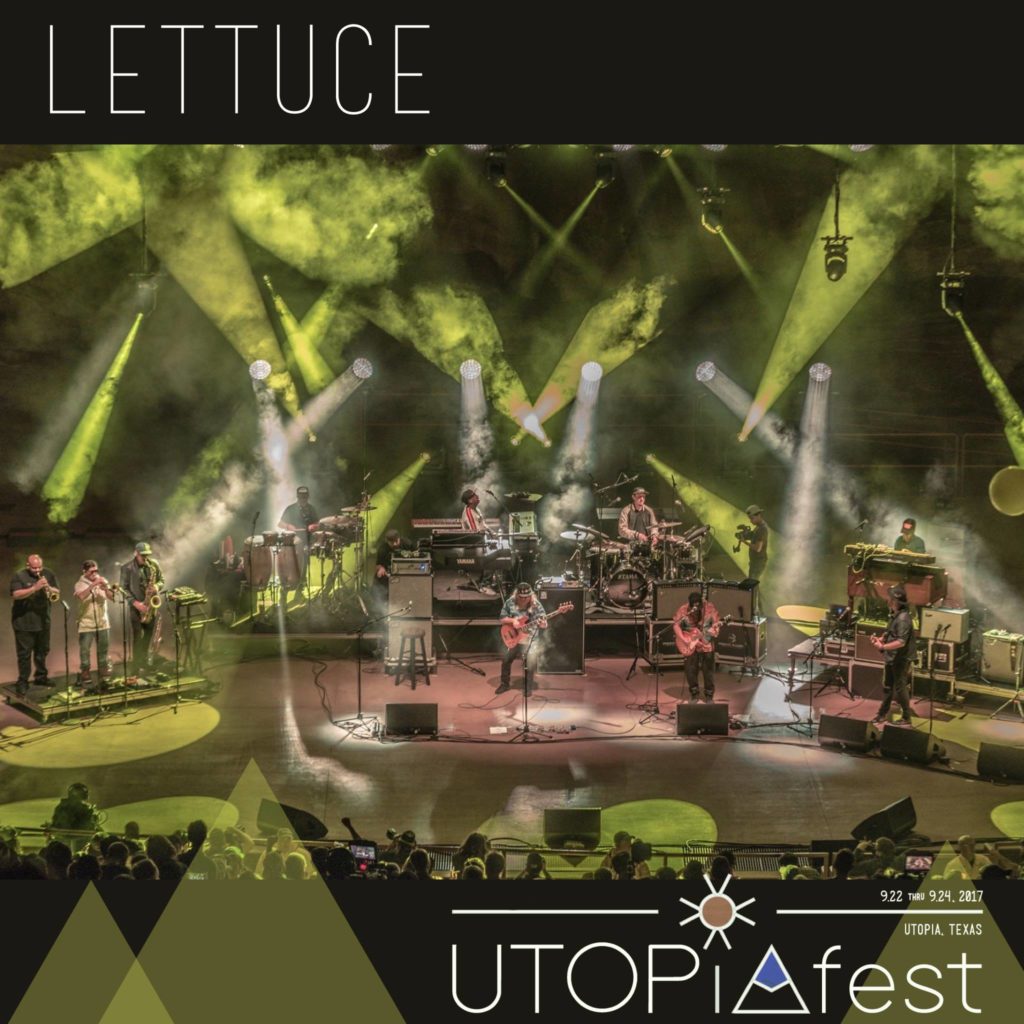 The People Behind the Fest

Utopia is a straight up family fest, focused on quality over anything else. This is apparent through the production, lineup, workshops, vendors, art and everything else that completes the Utopia puzzle. Let’s give a HUGE shout out and THANK YOU to everyone who makes this gathering possible for us to enjoy. Y’all are the real MVP’s!

Pre-Parties and After parties

The Utopiafest party starts early and ends late. Head to Empire TONIGHT for some Toubab Krewe, Baskery and Roy Lee Jones. Tickets are available here. After the fest is over, reminisce and dance a little more at one or both of the official Utopia after parties on September 25th, 26th and 27th. 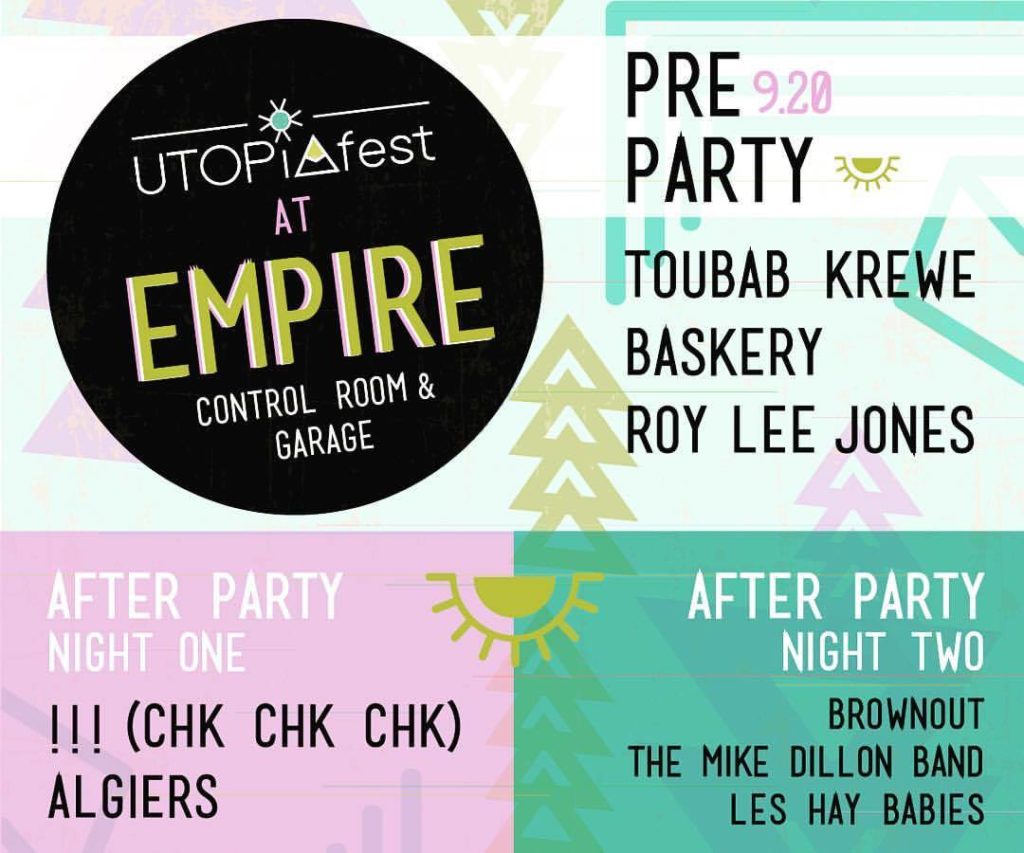